An upward path beset with uncertainty

Financial markets are still constructive on the whole. There have been two distinct phases in the past few weeks. At the beginning of March risk aversion reared its head again, already observed during the last few days of February, pushing down the main risky assets and particularly emerging stocks. The reason for this dip was the fear of a more aggressive toughening up of US monetary policy than initially expected, due to the strength of several economic activity indicators for the country. But in the second part of the month purchases resumed in the main risky asset markets, encouraged by the more conservative and balanced tone adopted by the Federal Reserve (Fed) on announcing another fed funds hike.

Volatility remains relatively constrained in spite of the slight upswing during the last few days of March. Such low risk aversion is, however, a reason for concern when we consider the different sources of uncertainty hovering over the global financial environment. First, there is a large amount of doubt regarding the Trump Administration’s policies (fiscal stimulus, protectionist stance, etc.), as well as how much support such policies may receive. Second, Europe’s numerous elections continue to grab the attention of investors who may become more nervous as the French presidential elections in May get closer. But the outcome of Europe’s first important election in the Netherlands, with voters backing the incumbent government, has helped to contain political risks in the euro area. Finally, the limited run for commodities and oil prices, in particular, could also be added to the list of risks for financial markets over the coming months.

The ECB leaves its main monetary policy measures unchanged but improves its risk assessment. The Governing Council of the euro area’s central bank did not announce any significant alterations after its March meeting. No changes were introduced to the ECB’s monetary policy, whose asset purchases will continue at a monthly pace of EUR 60 billion between April and December this year, in line with the adjustments in its asset purchase programme announced in December. But the monetary authority improved its assessment of downside risks due to solid domestic demand in the euro area and a lower risk of deflation. The ECB also slightly improved its growth forecasts for the euro area: 1.8% in 2017 and 1.7% in 2018 (+0.1 pp in both cases). Regarding inflation, the institution believes the significant increases in headline inflation observed over the past few months are due to temporary factors (e.g. the upswing in oil prices) and stressed once again the need for a self-sustained recovery in core inflation for it to consider altering its accommodative stance.

The Fed announces another hike in the fed funds rate but maintains its gradual plan for increases. As the market had anticipated, the Fed raised the fed funds rate for the second time in three months up to the interval of 0.75%-1.00%. But the US monetary authority adopted a dovish tone and kept its interest rate scenario unchanged, with two more hikes this year and three more in 2018. These means the Fed does not believe inflationary risks are on the up. Yellen noted the central bank’s willingness to tolerate inflation temporarily overshooting its target (2%). Over the coming months the growing question will be when the Fed will start to reduce its balance sheet. We expect the monetary institution to announce it will cease reinvestments from its bond portfolio towards the end of this year. But good communication will be vital to avoid market disruption, like in the taper tantrum of May 2013.

Political uncertainty agitates sovereign bond markets, both in the US and Europe. Yields on US Treasury bonds fluctuated up and down. Short-term interest rates picked up, for instance US2Y yields rose to above 1.3%, supported by the Fed’s interest rate hike, while long-term yields fluctuated within the interval predominant since the beginning of the year (2.4%-2.6% for US10Y). This pattern was caused by doubts concerning the Trump Administration’s tax and budgetary policies, plus recent messages by the Fed that it will not alter its stance. In the euro area, the electoral calendar continues to affect sovereign yields, although recent events have improved investor sentiment to some extent. Particularly the victory in the Netherlands of the centre-right candidate on 15 March, concluding the first of several sources of risk in Europe’s political agenda this year. The confirmation of J. Macron as a candidate in France’s presidential elections also helped to reduce concerns of M. Le Pen, the right-wing candidate, potentially winning the election. Nevertheless, political uncertainty will continue and disruptive events cannot be ruled out entirely.

The euro-dollar exchange rate increases slightly on the forex market. After falling at the end of February, down towards the zone of USD 1.05, the euro appreciated at the beginning of March, ending the month at USD 1.08. The main reason for this rise was the Fed’s less hawkish stance than expected and the ECB’s more balanced message. During the last few days of March, the euro reached its highest level against the dollar this year so far, with the failure of Trump’s health legislation fuelling doubts regarding the capacity of the new Administration to carry out reforms. But we have not revised our forecasts as we believe this is temporary and the diverging monetary policy dynamics have yet to be completely reflected by the markets. This is a highly uncertain scenario, however, especially when the Trump Administration’s actual fiscal stimulus is still doubtful. The main emerging currencies recovered their constructive tone observed over the past few months after a dip at the beginning of March (due to fears of more restrictive policies in the US). The J.P. Morgan global index for emerging currencies regained its level prior to Trump’s victory. The strong recovery observed just after the Fed’s meeting is a positive sign as it suggests the emerging financial markets are able to withstand a gradual rise in the fed funds rate.

Gains continue in the emerging stock markets. Neither uncertainty about Trump’s policies nor the repeated weakness of commodities prevented most emerging stock markets from ending March on a positive note. However, emerging equity was more sensitive to changes in the monetary policy stance of the US. It suffered significant losses at the beginning of the month fuelled by expectations of a more hawkish Fed, then strong gains afterwards due to the institution’s more dovish message. Developed stock markets were still constructive in tone although more moderate than in the past few months. The Spanish stock exchange performed particularly well with the Ibex 35 going above 10,000 points, thanks especially to bank stock.

Oil prices: back down again and a change in the outlook. After a relatively stable start to the year and strong gains following the OPEC agreement, the price of crude oil has faltered again. In March the Brent barrel price posted considerable falls, back down to just over USD 50 and clearly below the USD 55 barrier exceeded when OPEC agreed to cut its production. Oil will remain volatile over the medium term but several factors suggest its upward trend will be weaker than initially projected. First, US shale production has rallied more strongly than first expected. This suggests notable productivity gains in the sector, now profitable at prices below USD 60. Second, there has been a considerable increase in US oil stocks, reaching an all-time high at the beginning of March. Given this situation, we have downgraded the gradual increase predicted in the Brent price, which should reach USD 58.5 by the end of 2017 (previously USD 62.6) and USD 64 by the end of 2018 (previously USD 69). 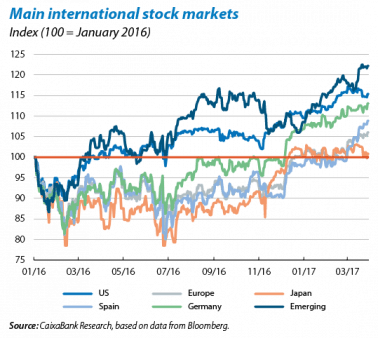 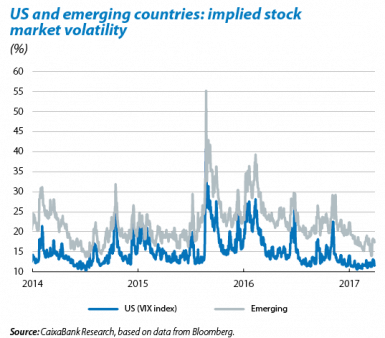 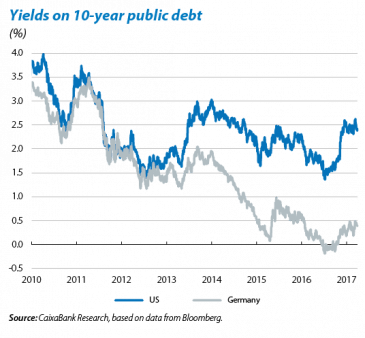 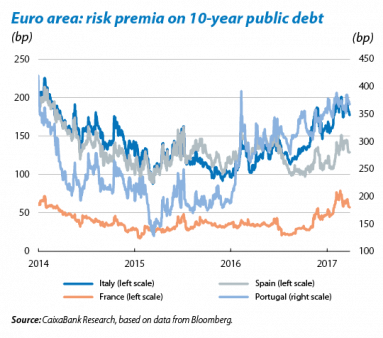 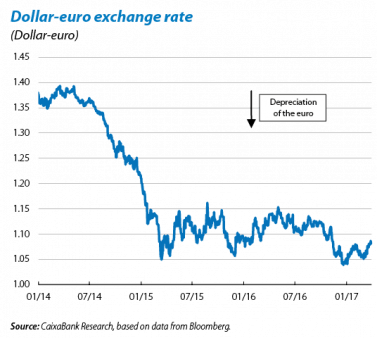 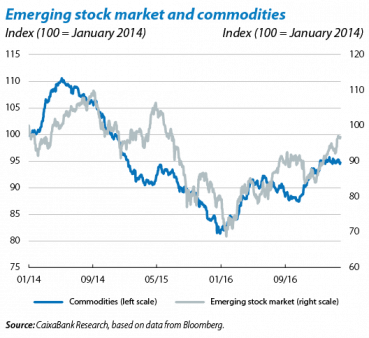