The effects of the euro's appreciation

At the meeting of the Governing Council of the European Central Bank (ECB) on 8 May, Mario Draghi expressed concern regarding the persistent appreciation of the EU's currency (reaching 1.38 dollars per euro that week, its highest value since 2011). Given the possible impact of a strong euro on the region's price stability and economic growth, the President hinted at imminent intervention by the institution with monetary stimulus measures. The markets soon reacted and the euro lost 2.2% against the dollar in one month. However, there is growing anxiety in several European capitals regarding the euro's strength and how it might harm their export capacity. In spite of this, and in the current context of low inflation and weak domestic demand, it is very important to analyse the real impact of the euro's exchange rate fluctuations on the euro area's economy.

The main channel through which exchange rate fluctuations affect the economy is by their impact on prices. This occurs via two opposing effects: on the one hand, a stronger euro makes exports more expensive, leading to a loss in competitiveness compared with other rivals and therefore a reduction in the volume of exports. But, on the other hand, a stronger euro also makes imports cheaper, reducing the cost of all those intermediate goods that are imported (for example, oil and other raw materials). The combination of these two opposing effects1 and the ability of companies to vary the margin they operate under mean that the impact of the euro's exchange rate is not passed on entirely to export prices but is reduced and, therefore, the final impact on the volume of exports is also reduced.

Given that the main engine of growth during the crisis has been the foreign sector, it might seem that concerns regarding the strong euro are well founded, although we need to quantify the real economic impact to reach any firm conclusions. Since January 2013, the euro's nominal effective exchange rate has appreciated by approximately 5.0%. Based on a study by the ECB,2 an increase of this size reduces exports by 0.6 p.p. in the first year and by close to 1.0 p.p. cumulative in the long term. Given that the region's exports of goods and services grew by 2.8% in 2013 Q4, the exchange rate pass-through does not seem to be insignificant although neither is it crucial.

With regard to the impact on the CPI, this appears to have become more significant recently as surplus output and low commodity prices have pushed down inflation, increasing the risk of deflation throughout the region. A rise in the exchange rate is passed on to consumer prices mainly by making import prices cheaper. Carrying out a similar analysis to the one above, if the euro appreciates by 5.0%, it pushes inflation down by 0.1 p.p. the first year and by around 0.6 p.p. in the long term. Consequently, the potential effect of a sustained appreciation of the euro does not seem insignificant, especially if we bear in mind inflation's very low level at present. The ECB is doing the right thing in keeping a close eye on the trend in the exchange rate.

1. Depending on the import content of exports, part of the gain could be passed on to inputs (cheaper imports) at a lower output price, maintaining margins. 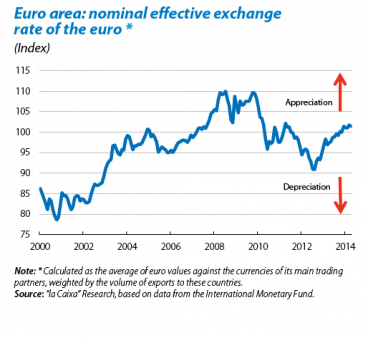