Outlook of moderate inflation in the euro area

At the November meeting of the ECB Governing Council, Mario Draghi surprisingly announced a cut in the reference interest rate. The euro area's rate of inflation has been on a downward slide over the last few months, in fact standing at 0.9% in November, far from the ECB's own target of 2%. Although long-term inflation expectations remain firmly anchored, Mario Draghi stressed there was the risk of the euro area seeing a prolonged period of low inflation. Will this come about?

One relatively simple way to determine the likelihood of the euro area entering a long period of low-level inflation, or even deflation, is by using an index(1) that summarises the economic conditions under which, historically, such episodes have occurred. Certainly, as can be seen in the first graph, this index has crossed the line as from which the risk of deflation is high. Moreover, if we extrapolate the trend in this index in accordance with our projected scenario for the next two years, the deflation risk index falls but remains above its average level for the last two years. It therefore appears that the ECB's concern is well-founded; the risk of deflation is small but the euro area will probably enter a period during which inflation will remain low.

One of the main reasons for price variations staying at a low level over the coming years is the euro area's surplus installed capacity. As can be seen in the third graph, the euro area's GDP is clearly below its potential, relieving pressure on prices. Moreover, although it is true that the recovery will progressively reduce the gap between GDP and potential GDP, this looks like happening very gradually. Another of the factors that will help pressure on prices to remain contained are the improvements in price competitiveness being carried out by the periphery countries. These are the ones that had traditionally pushed the inflation rate up but, provided they continue to improve in terms of  competitiveness, over the coming years they will actually push inflation down.

In this respect, it is important to note that, for countries such as Spain which are undergoing significant adjustments in competitiveness, the European situation is a considerable handicap. As can be seen in the same graph, the gap between current and potential GDP is wider in Spain than in the euro area, so that inflation will probably be lower. It is therefore important for the ECB to employ all the instruments within its reach to return inflation to at least 2% since the inflation rate for the euro area as a whole will ultimately be determined by monetary conditions. 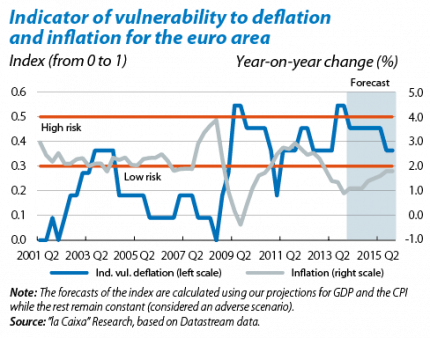 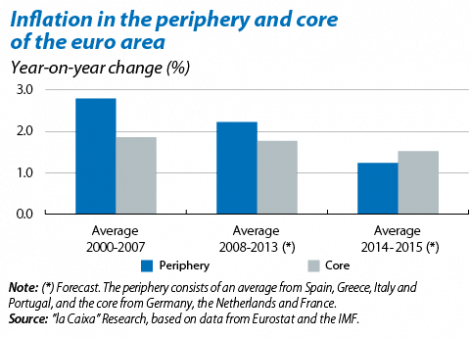 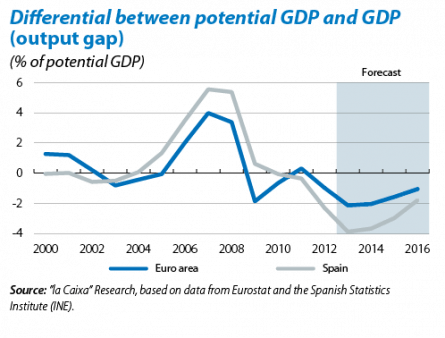