The prices of energy and unprocessed food have been volatile recently. The ECB has therefore turned its attention to the trend in core inflation, which excludes these components, in order to analyse the underlying price dynamics. Previous Focus articles1 have examined how the trend in core inflation is related to developments in the labour market. One reason is that the main component of core inflation, services with 54% of the basket, is particularly labour-intensive. Another important component receives less attention, however: non-energy industrial goods (NEIG), with a 32% share of the basket.2 As can be seen in the first chart, NEIG inflation is much less tied to the cyclical position of the economy. So what are its main determinants and outlook?

As can be seen in the third chart, since the end of 2016 inflation for intermediate goods has recovered notably, coming particularly from imported intermediate goods. This reflects the recovery in global producer prices, affected at least in part by commodities. Such relationships suggest that NEIG inflation will recover over the coming months.

As higher producer prices are passed on down the chain or «pipeline», this will help core inflation to recover, in addition to the effect of the improved labour market. As we have seen in this and previous Focus articles, both processes point to a gradual upturn in core inflation, a situation that will influence the ECB’s next few meetings.

2. The remaining 14% corresponds to processed food.

3. The NEIG basket contains a range of goods, such as pharmaceutical and personal care products, cars, computers, clothing and footwear.

4. The difference between producer and consumer prices corresponds to distribution and retail margins. 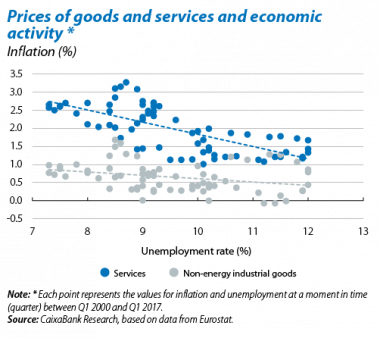 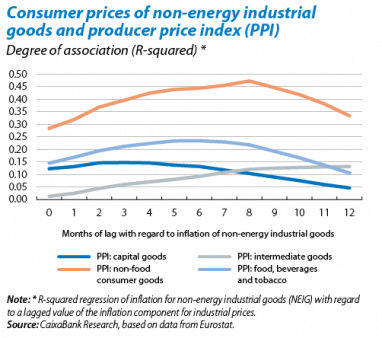 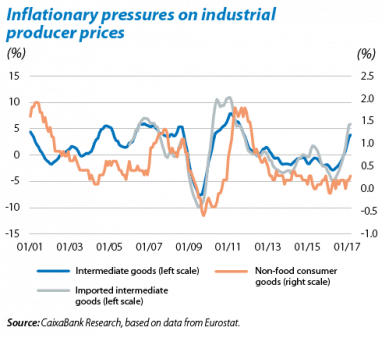