Weakness, shale and Saudi Arabia's strategy behind the upheaval in oil

Oil is once again becoming a key factor for the short and medium-term economic outlook. After a period of relative stability (the Brent barrel has fluctuated around 110 dollars over the last three years), a sharp fall of more than 30% between June and November has taken most analysts by surprise. So have we embarked on a phase of «cheap» oil or will we see an equally sharp rise as this fall in the future? Although the answer to such a huge question goes beyond the purpose of this article, we might be able to provide some clues as to where prices will go in 2015 by merely describing some of the elements that lie behind this sudden decrease.

Without doubt, this downward correction has given oil importing countries some respite, especially many of the euro area economies whose growth is still weak. At the other end of the spectrum, oil exporters are suffering the consequences of unexpectedly lower prices. A reduction in their oil revenues could jeopardise the sustainability of their public accounts which are closely linked to this revenue, as well as put pressure on their external positions (deteriorating their current balances). In particular, the equilibrium price of their fiscal balances (the price at which the fiscal balance is zero) is significantly higher than 85 dollars per barrel in most cases although, naturally, not all of them have the same resources to withstand a period of low prices. For example, the fiscal equilibrium price for Saudi Arabia is above 90 dollars, but its ample international reserves and access to low cost financing provide it with a privileged position compared with other exporters such as Iran, Venezuela and Nigeria, to cite just three countries that also form part of the oil cartel, OPEC.

The convergence of different kinds of factors, related to both supply and demand, has helped oil prices to plummet. Concerning demand, of note is the error in predicting an increase in demand in 2014. The International Energy Agency (IEA) expected higher growth in the demand for oil than finally occurred, as can be seen in the continual downward revisions of its estimates, the last one in October (see the graph). Weaker global prospects, especially in the euro area, and a larger slowdown in growth rates in Asia, principally China, are two factors that have undoubtedly encouraged these continual reductions in the forecasts.

There is also the effect of the closure of a large number of long speculative positions held since the start of the summer within an overall risk-off situation regarding energy commodities in general and crude oil in particular. As well as the effect of the dollar's appreciation which, in the short-term, allows exporting countries to maintain their revenue even though the price per barrel is falling.

On the supply side, Libya's vigorous and unexpected return to the international oil scene after the disruptions in production caused by its armed conflict, together with an increase in production in Iran, Nigeria and Iraq, have all played an important part. However, two countries have contributed considerably to this huge correction: the US and Saudi Arabia. The shale oil (and gas) revolution has once again placed the US in the centre of the world's energy map. In spite of the relatively wide distribution of international shale reserves, today's production and exploitation are concentrated mostly in the US and Canada. In particular, US shale oil production accounts for around 35% of its total crude production (compared with 5% in 2005) according to the US Energy Information Administration (EIA). Shale gas is in the same proportion, also representing 40% of all the gas produced in the country. According to the IEA, the United States would become the world's leading oil producer before 2020, ahead of Saudi Arabia and would even take the place of Russia in terms of gas production, becoming almost self-sufficient in energy terms by around 2035.

However, in spite of this increase in supply, Saudi Arabia has not reduced its production by a single barrel. Over the last few years, it has used its privileged position to keep, as far as possible, world supply in line with demand at the time, helping it to maintain a relatively stable price. However, during the summer and the first few months of autumn, when the aforementioned changes in supply and demand materialised, OPEC's largest producer (accounting for one third of the cartel's total oil) did not reduce its production. This strategy has generated numerous economic and geopolitical theories. Low prices for a prolonged period of time would seriously punish Iran, Saudi Arabia's rival in a religious and political battle between Shiites (Iran) and Sunnis (Saudi Arabia) which they have been fighting for more than thirty years. Similarly, due to the specific characteristics of the shale industry, it is believed that a price substantially below 100 dollars, such as the present, could slow up shale investment in the US, which would help Saudi Arabia to keep hold of its market share. Whatever the reason, it seems clear that Saudi Arabia has embarked on a low price war, making the path that might be taken by the price of crude oil over the coming months even more uncertain.

Although it is not very likely, a slowdown in the shale fuel boom in the US would have significant economic consequences both at a local level (within the US economy itself) and globally. In the US, shale exploitation (both for oil and gas) has come as a considerable boost for the American extraction industry at a time when many industrial sectors were in crisis. According to data from the US Bureau of Economic Analysis, between 2007 and 2013 the production and number of workers in the energy sector grew by 36% in both cases. These data contrast with the trend in production and employment for the US economy as a whole over the same period, namely 14% and –2%, respectively. Although the modest relative weight of this sector in US production overall means that any direct effects are moderate, analysts are focusing their attention on the possible indirect effects in operation through the country's energy production and consumption structure. Specifically, in a report published recently, the Federal Reserve points out that energy-intensive industries have benefitted, and will continue to benefit, considerably from the drop in US gas prices and that, taking into account the fact that companies adjust their production gradually, the effects of the boom have yet to be seen in their entirety. That's why, for the moment, the estimated rise in manufacturing activity and employment is still at a moderate 2-3%.1,2 The shale revolution should also result in an improvement in the country's external balance in the medium term. As of today, close to 50% of its current deficit comes precisely from meeting its energy needs.

At a global level, shale has led to considerable price stability within the higher ranges. The balance between supply and demand has always been fragile, especially due to supply's relative inelasticity to growing demand. Given this situation, shale oil has provided a new source of supply for crude oil at prices from 80 to 100 dollars. In economic terms we could say that the supply curve has flattened out in the higher price zone. This has allowed demand to rise without pushing up prices, unlike what has happened in the past. The 140 dollars per barrel paid in mid-2008 are now a distant memory.

Cheap oil for a relatively long period of time, leading to less investment in non-conventional exploitation in the US, could thwart the improvements in production of numerous industrial sectors in the country, as well as increase fluctuations in prices internationally. Although lower oil prices should be an advantage for a net importer (such as the United States), halting the shale oil revolution could lead to a significant slowdown in the US shale gas revolution, which is very important for the country's industrial sector. Advances in fracking techniques, used to release both shale oil and gas, have clearly benefitted from the large number of exploitations not only of gas but also oil. Similarly, numerous underground shale deposits contain significant amounts of oil and gas so that a drop in oil prices could thwart investment in this kind of exploitation and therefore part of the future production of gas. Lastly, also of note are the advantages in lower energy dependence given the high volatility of oil prices due to ever-present and unpredictable geopolitical tensions.

Nonetheless, two elements are acting in favour of the shale revolution continuing. First, the rapid increase in productivity of fracking techniques makes it unlikely that a relatively cheap price such as the present might push shale out of the game. Second, the difficulties imposed by Saudi Arabia's low-price strategy on several members of OPEC mean that, sooner or later, the oil cartel will agree to reduce supply and the price per barrel will therefore recover part of the ground lost over the last few months. In this respect, it is no wonder that the decision taken last 27 November to keep OPEC's overall production ceiling the same came as a surprise.

In short, after an unusually long period of stable oil prices, the convergence of several factors has created uncertainty regarding the outlook for the short and medium term. The bulk of the evidence available suggests that, at least in the short term, oil will remain at a lower price than we have seen over the last few years. However, we are well aware of how oil prices work: as soon as you analyse why they have fallen or risen, they go up or down again. The only sure thing is that we will have to keep a close eye on them.

2. The limited integration of US gas in the international market means that its price is determined by local supply and demand and the shale gas boom has therefore been a key factor in the price falling. 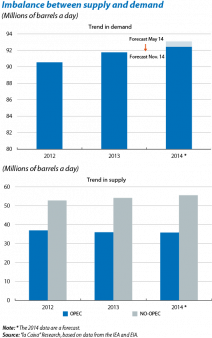