The impact of the economic crisis on the labour market has been one of the main concerns in developed countries over the last few years. The loss of jobs, particularly when long-term, decapitalises a country, increases the risk of poverty, demotivates the people affected and their environment and entails significant costs for the public coffers. Therefore, when there is a slump in economic activity, insofar as possible it is preferable to minimise the effect on the employed population as a whole. This article analyses the trends in the labour markets of Spain, the USA, United Kingdom and Germany, highlighting some of the factors that help to cushion the recession's impact on the labour market.

The decline in GDP suffered by these countries during the crisis was not very disparate: in the United Kingdom this fell by 7.2% between 2007 and 2009, and in the USA and Germany by 4.3% and by 5.9% between 2008 and 2009, respectively. Neither has this drop been much greater in Spain, even though the recession has lasted longer: specifically 7.0% between 2008 and 2013. Except in Spain, the trend in the total of hours worked was not very different either. In the USA they fell by 5% while in the United Kingdom and Germany the reduction was around 3%. In Spain, however, the decline has reached 16.5%.

Adjustment through the hours worked per worker is useful when it occurs within a temporary slump in activity. In the USA and Spain, given that the recession has been particularly intense and long-lasting in the real estate sector, it is to be expected that this kind of adjustment would be less effective to ease the impact of the recession. However, it is worth analysing in more detail the factors that allowed the reduction in hours worked per worker to have such a successful effect in Germany. According to Schmitt (2011)1, this was achieved mainly via four instruments. Firstly, 25% of the drop in hours occurred thanks to the subsidy for part-time employment. With this formula, for example, if a firm reduces an employee's work day by 20%, the worker receives 20% of the unemployment benefit. Secondly, numerous agreements were adopted between workers and managers that established temporarily shorter working days. According to the study, this last measure accounts for 40% of the reduction in hours per worker recorded in Germany during the crisis. A further 20% of the adjustment was achieved using a «working time bank» system. Specifically, entrepreneurs reduced their workers' work day on account against the hours they had accumulated previously. Lastly, the rest of the reduction in hours can be explained by a decrease in overtime.

Making working time more flexible is not the only way to mitigate a drop in the number of employees during a recession; this can also be carried out through wage adjustments. Inflation reduces real wages insofar as the nominal wage rises more slowly than the CPI. Albeit to a greater or lesser extent, in all the aforementioned countries the growth in wages per hour worked has been less than the rise in inflation over the last few years. In the USA, the growth in nominal wages per hour in manufacturing between 2007 and 2013 was relatively subdued (2.0% year-on-year, on average) but so was inflation (2.1%). However, in the United Kingdom, in addition to a relatively moderate growth in nominal wages (2.4%), inflation was also quite a lot higher (3.4%). In Spain, during the first few years of the recession nominal wages in industry continued to grow at a high rate (3.7% between 2007 and 2011) but, as from 2012, there was a very noticeable change: between 2012 and 2013 Q3 the growth in wages was 1.8% year-on-year on average while inflation stood at 2.2%.

It used to be assumed that wages were more rigid and that it was therefore difficult to lower them. Given that negative changes in wages do not normally occur for the whole of the employed on average, it was supposed that inflation was the main means of adjustment. However, a recent study for the USA and United Kingdom shows that a significant proportion of workers saw a nominal reduction in their wage. Specifically, Elsby et al.2 observed that, in the USA, 25.5% of those surveyed reported a drop in nominal wages in 2012. The data for the United Kingdom are similar: in 2011 23.1% of the changes in nominal wages were negative.

In conclusion, the experience of the last few years must serve as a lesson to improve the institutions that govern labour relations in all developed economies. It is necessary to identify those factors that have more effectively helped to ease the impact of the last recession in each country so as to handle the next one more successfully. There is a lot of room to manoeuvre.

1. Schmitt, J. (2011), «Labor Market Policy in the Great Recession. Some Lessons from Denmark and Germany», CEPR. 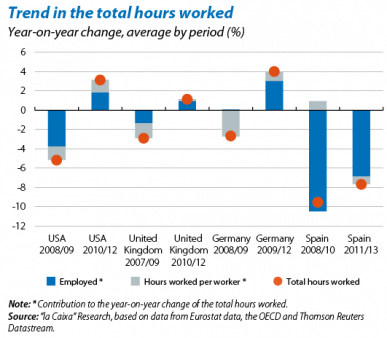 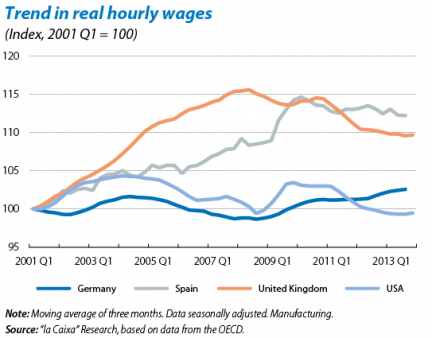