Portugal: have we reached the end of the golden recovery of the labour market?

The reduction of unemployment has been the most significant aspect of the Portuguese economic recovery in recent years, to the point where the number of unemployed is currently lower than it was before the 2008 financial crisis.1 Furthermore, we need to go back to the end of 2002 to find an unemployment rate as low as that registered in the second half of 2018 (6.7%). Faced with the slowdown in the economy expected in 2019 and the recent stabilisation of the unemployment rate, it is a good time to analyse what path unemployment might follow in the future.

What do we know about Portugal’s natural rate of unemployment? As can be seen in the chart, between 2008 and 2013 both the observed and the natural unemployment rate rose rapidly. This suggests that the labour market was affected by both the economic cycle and by structural factors. In fact, during periods of recession, the lower economic activity initially causes business activity to reduce or even come to an end, destroying jobs. As the recession intensifies, the amount of time for which people are unemployed also increases. This makes their re-entry into the labour market more difficult, since their skills gradually deteriorate and cease to meet the market’s requirements. In this context, the number of people in long-term unemployment increases, as occurred in Portugal between 2008 and 2013.3 In addition, structural unemployment is accentuated not only by this loss of skills but also by a greater imbalance between the skills that are required by the market and those that the workers possess (the so-called skills mismatch). This was observed in the last recession, both in Portugal and in other economies of the euro area (probably due to the construction crisis, which led to the consequent destruction of many jobs in the sector).4

However, with the economic recovery, some of these structural factors are undone. As can be seen in the chart, the natural rate of unemployment has fallen to 8.2% in 2018 (as estimated by the European Commission). This figure is higher than the observed unemployment rate (which probably stood at 7% in 2018), reflecting a greater maturity of the labour market and suggesting the possibility of stronger wage dynamics. In fact, the net monthly average remuneration of employees grew by 3.8% year-on-year on average in the first three quarters of 2018, although this trend may also reflect other factors.5 There are also other trends that reflect the greater maturity of the labour market. Specifically, the unemployment rate stabilised at 6.7% in December for the second consecutive month, while growth in employment slowed down, although there is still scope for recovery in sectors where firms have difficulties finding suitable workers (such as construction).6

In short, with the labour market having thoroughly consolidated its recovery, it is possible that the lower rate of unemployment will contribute to stronger wage pressures in the future. Nevertheless, the estimates of the natural rate of unemployment must be interpreted with caution, since they vary over time and depending on the methodology used to calculate them.7

3. In 2013, people in long-term unemployment accounted for 62% of the total number of unemployed.

5. Such as the elimination of an additional tax on income that had been established in 2011.

6. This is reflected in the annual costs survey of the economy for 2017. 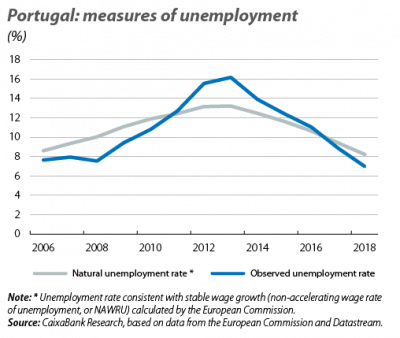