In most developed countries, the share of national income represented by wages,salaries and benefits –the labour share– has tended to decrease for decades while the share of capital income is showing a clear upward trend. When economic growth was widespread and vigorous, this was no cause for concern. Although income from one productive factor was growing more quickly than income from the other, ultimately all were rising. However, the severe recession over the last few years, which has particularly affected some segments of the population, makes it vital to re-examine how income is distributed.

The distribution between labour income and capital income is often an initial indicator in analysing the possible creation of social inequalities. Capital income is more concentrated in the population than labour income, so if the labour share decreases and that of capital increases, inequality among the population will probably increase as well. In the USA, for example, according to a study by M. Jacobson and F. Occhino,(1) the Gini index for capital income has risen to 0.85 over the last decade while for labour income it has remained at around 0.50.(2) Similarly, an OECD study reveals that the rise in inequality indices has been the highest in those countries where the labour share has fallen most significantly.(3)

Usually the wage bill is divided by GDP in order to measure the part of production that corresponds to labour income. As can be seen in the first graph, the labour share has fallen significantly in almost all developed countries. On average, this drop has been 3 p.p. in the last 35 years, the only exceptions being Denmark, the United Kingdom, Portugal and Spain.

Due to its simplicity, this methodology is easy to implement and allows us to make international comparisons. It does, however, have significant drawbacks. Firstly, it tends to overestimate the labour share in non-market sectors such as public administration. In such sectors, the value added for national accounts is usually calculated by adding labour costs together. Similarly, the labour share is highly volatile in industries such as mining or energy, where the value added tends to fluctuate considerably depending on commodity prices.

Another big problem with this calculation lies in the fact that, by definition, the wage bill does not include income for the self-employed and therefore does not take into account a significant proportion of labour income. One way to avoid such problems is to calculate the labour share for the business sector only, excluding the self-employed. In this way, labour income and capital income can be totally separated, in exchange, however, for restricting the analysis to one part of the productive system (around 60%). Karabarbounis and Neiman (2013) have built up a database that allows them to analyse the trend over the last 35 years in 59 countries, making use of both methodologies. Applying the second methodology, which is more refined, it has been detected that the labour share is higher than the figure obtained when the simpler definition is used, but the downward trend is still statistically significant and economically relevant. Specifically, 5 p.p. for the 59 countries as a whole.(4) Once again, the United Kingdom, Portugal and Spain are the exceptions.

Given the trends in the distribution of income over the last few years, it comes as no surprise to see that the 1% of the population with the highest income are receiving an ever larger proportion of the total income. Once more, the case of the USA stands out. While, in the 1980s, the share of income distributed to the 1% of the population with the highest earnings was 10% on average, between 2001 and 2010 this increased to 16.8%. Beyond the USA, there is clear evidence to suggest that this trend has also been upward in the vast majority of developed countries.

In short, in most countries there has been a big drop in the labour share and it is of the utmost importance to understand the factors that lie behind this situation. The next three articles in this Dossier are devoted to this. The article «Technology and wealth: two phenomena working for or against workers?» analyses how these two elements may have affected the optimum productive combination of capital and labour. «Globalisation and the redistribution of income» emphasises the effects of globalisation in a broad sense. And the last article in the Dossier, «The decline in the labour share in Spain and the USA: cyclical factors», examines recent developments in Spain and the USA. 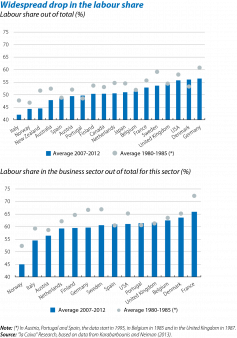 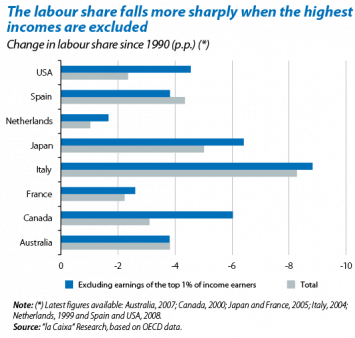 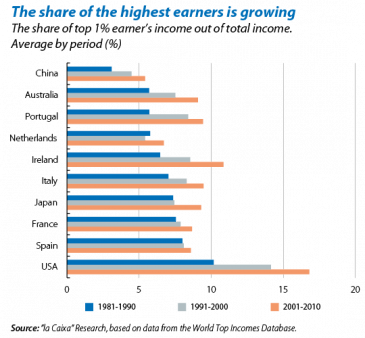