In November, Shimzo Abe took over a Japan plunged into recession, suffering from everlasting deflation and seemingly about to lose all competitive advantage in the Asian market. Six months later, its economy leads the ranking of growth among the advanced economies, its nominal GDP is on the rise again and the yen, at an all-time low, has restored some of the competitiveness lost. The key? It is neither a secret nor a magic formula: it is Abenomics, a combination of economic policies (fiscal, monetary and supply) promoted by the new government whose aim is to get the Japanese economy out of the abyss of deflation and revive its growth potential. Will it work?

For the time being, it has obviously had an effect. To begin with, it has boosted the confidence of Japanese consumers, which largely explains the good growth figures for the first quarter. On the other hand, the expected monetary expansion by the Bank of Japan (the first pillar of Abenomics), which aims to take the monetary base of 29.4% of GDP to 57.3% by December 2014, has led to a depreciation in the yen, since October, of 23% against the dollar and 21% against the won and Taiwan dollar. This has boosted the exports of goods, albeit at the cost of its main Asian rivals and encouraging fears of a currency war. In this drive for growth, consumption and exports will soon be supported by a rise in public spending equivalent to 2.2% of GDP (the second pillar of Abenomics).

Nonetheless, although effective in the short term, demand policies are unlikely to boost long-term growth on their own. This requires taking action on the underlying problems gripping the Japanese economy which result in poor growth, unsustainable public finances (debt is higher than 235% of GDP) and a gradual erosion of the current account surplus. There are two Achilles heels: an ageing population and excessive corporate savings. In the short term, the yen's depreciation is helping to improve the current surplus and channel part of these surplus corporate savings towards other countries, while negative real interest rates help to channel another part towards domestic investment. However, this will not be enough to absorb corporate savings that have been estimated at 29.5% of GDP in 2011. That is why the success of Abenomics critically depends on the correct administration of its third pillar: structural reforms.

These reforms must discourage excessive corporate savings (via measures such as lower taxes on dividends, incentives for investment or greater shareholder power). Public finances must also be adjusted to the demographic situation and mitigate, as far as possible, the impact of an ageing population on the activity rate, for example by encouraging female employment. 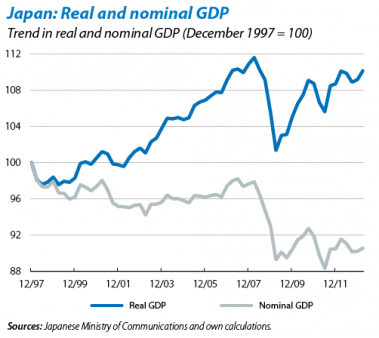 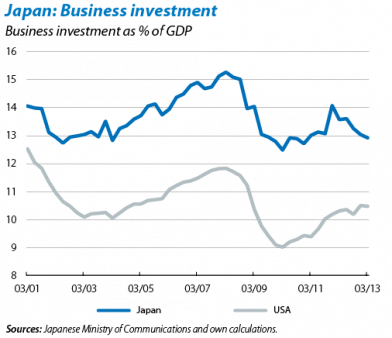 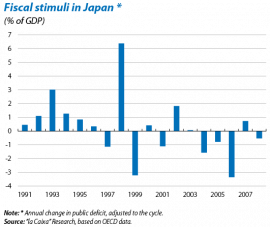 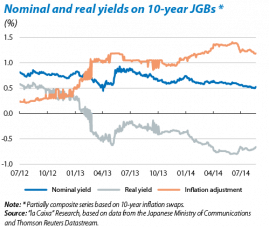 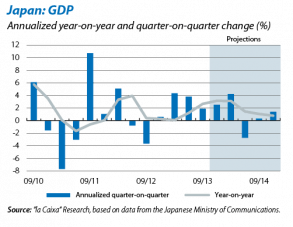