The Bank of England: new measures for new times

During the crisis, the central banks of the main advanced economies have taken charge of providing the necessary conditions to create an accommodative environment in the markets via official interest rates close to zero and unconventional monetary policies. As the economic recovery consolidates, this easy situation should change. Doubts are therefore starting to emerge as to when the turning point will come for monetary strategy and which country will be the first to take this step.

Some of these questions are starting to be answered by the statements made by Mark Carney, governor of the Bank of England (BoE). He has warned that interest rates might start to rise earlier than the markets anticipated, which had expected the first official interest rate hike in 2015 Q2. The markets reacted immediately to his declarations and are now forecasting the first rise at the end of the year. This different tone taken by the governor's discourse is based on a more encouraging macroeconomic environment than expected and on favourable prospects for GDP growth. That is why risks of inflation might start to appear, as well as bubbles in certain assets, especially in the real estate market. Let's look at this step by step.

With regard to price stability, in May inflation was at 1.5%, far from the levels that might concern the central bank. The consensus of analysts, however, expects inflation to end the year at around 2.0%. Price containment will chiefly depend on how quickly the labour market continues to recover. The unemployment rate had already fallen to 6.6% in May and looks like improving further, ending the year at 6.4% and down to 5.7% in 2015, levels very close to those prior to the crisis. Although this could be taken as a sign that the United Kingdom is close to full employment, the salary trend rules out such a hypothesis since, at present, no upward pressure can be observed on wages which are still growing at a much slower rate than before the crisis (an average of 1.1% year-on-year since the start of the year compared with 4.3% between 2001 and 2007). This might be an indication that the surplus capacity available in the labour market is larger than suggested by the unemployment rate. For example, the percentage of part-time employees is still above its
pre-crisis level (27% in 2013 compared with 25% historically) and, in turn, the percentage of these part-time employees who do not want to work part-time has risen to 17.8% compared with 9.6% before the crisis.

Another factor lying behind the governor's change in tone is the growing unease about a potential real estate bubble. House prices are shooting up again, in April growing by 9.9% year-on-year although this trend is not widespread throughout all the regions but particularly intense in the capital. Taking this risk into account, and before starting to normalise monetary policy, the BoE has decided to use macroprudential instruments that limit household mortgage debt and thereby reduce households' vulnerability. One particularly important instrument is the condition that no more than 15% of British banks' new mortgages can be loans of more than 4.5 times a borrower's annual income and that lenders must also impose stricter tests on whether their customers can repay their loans at higher interest rates. The effectiveness of these new instruments and developments in the labour market will largely depend on the timing and pace of the interest rate hikes. 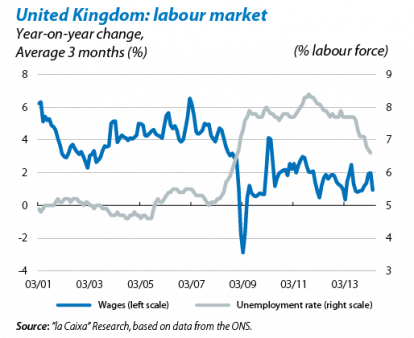 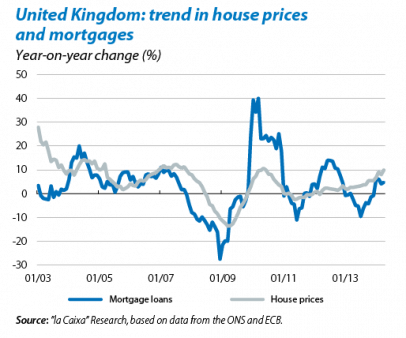