Over the last few years, the European Central Bank (ECB) has adopted extremely accommodative monetary policies, a strategy that has visibly influenced the decisions of many central banks from other European countries, to the point of jeopardising their monetary sovereignty. The expansionary measures recently adopted by some of them, given the ECB's announcement that it will start large-scale purchases of assets (QE), has intensified this debate. A review of the monetary strategies adopted by the National Bank of Denmark and the Swedish Riksbank could throw some light on this issue.

An analysis of Europe's small advanced economies, and in particular of Denmark and Sweden, shows that two of their distinctive features are their complete openness to the free circulation of capital and their markedly commercial orientation towards other countries. By way of example, in 2013, Danish exports accounted for 54% of the country's GDP while in Sweden this figure was 44%. Moreover, in both cases almost half the goods exported were sent to the euro area. Given such parameters, the increasingly accommodative monetary conditions provided by the ECB, and more specifically the euro's depreciation, have had a notable effect on these countries. On the one hand, the fact that their exports, in euros, are becoming more expensive makes them less competitive compared with the euro area, slowing up their economic activity. On the other hand the euro's depreciation places deflationary pressure on domestic prices via the import channel.

In spite of their similarities, these countries have very different exchange rate strategies that determine the tools available to counteract this situation. Firstly there are economies which opt to peg their currency to the euro in order to lessen the risks associated with exchange rate volatility. A case in point is Denmark which, in 1999, pegged the value of its currency at 7.46 Danish krone per euro, with a fluctuation band of ±2.25%, via the EU's Exchange Rate Mechanism. Although this strategy has been clearly favourable in terms of trade, it is also true that it has one considerable drawback from a monetary point of view as, within a situation of freely circulating capital, a country with a fixed exchange rate system actually loses its monetary autonomy. As a consequence, Danish monetary policy depends on that of the ECB, representing a significant limitation at times when both economies are following different economic cycles since interest rates cannot be used to correct any undesirable deviations in inflation or growth. This dependence can be seen graphically in the marked correlation observed between the Denmark's official interest rate and that of the ECB over the last decade. In fact, on 22 of the 25 occasions when the ECB has changed the interest rate since 2005, Denmark's central bank has responded almost immediately.

Other problems faced by countries whose currency is pegged to the euro are due to the difficulty, on occasion, of maintaining this system. One example is the increase in reserves accumulated by the Swiss National Bank (SNB) between 2011 and 2014, from 40% to 86% of GDP, to defend the limit set for the appreciation of its currency. Finally, at the beginning of 2015, and given the imminent announcement of QE by the ECB, the SNB decided to remove the peg from its currency and allow it to fluctuate freely, cutting the official interest rate to –0.75%. Those countries that decide to have a flexible exchange rate policy, like Sweden, face different problems. Unlike the Danish case, the central banks of these economies do enjoy monetary autonomy. Consequently, within the current context of abundant liquidity and financial interconnection, these banks are facing a serious dilemma.
They can exercise this autonomy, taking monetary decisions based on the economic conditions at home, which will more than likely import deflation and reduce economic activity via the exchange rate channel. Or, if they embark on an unconventional monetary approach to prevent their currency from appreciating too much, they might be applying an ultra-expansionary recipe to their economy that could push asset prices to an unacceptably high level.

The behaviour of Sweden's Riksbank over the last few years helps to illustrate both alternatives. In mid-2010, the improved tone of the Swedish economy and solid inflation prospects, above the central bank's target, led the Riksbank to gradually raise interest rates from 0.25% to 2% in just over one year. This policy's divergence from the ECB's own monetary policy, which was much more accommodative at the time, had quite a negative effect in the exchange rate between both regions, with the Swedish krona appreciating by close to 20% in 2010. This has provided the background to an intense debate between those justifying higher interest rates, both from a macroeconomic perspective and also to ensure financial stability, and those who believe that this decision plunged Sweden into a subsequent period of deflation and economic slowdown. Although neither side has clearly won this debate, it was probably very much present in the minds of those currently responsible for Sweden's monetary policy as, after the ECB announced the start of QE, they have taken an opposite route to the one chosen in 2010, cutting interest rates to below zero for the first time in their history (–0.10%) and starting a programme to purchase sovereign debt.

In short, events over the last few months have clearly shown the impact of the euro area's monetary policy on the official interest rates of other European countries, either because their currencies are pegged to the euro (such as the National Bank of Denmark) or in an attempt to minimise the effect of the euro's depreciation on their economy (such as the Riksbank). One way to test this dependency is by using the Taylor rule. According to this rule, the interest rate of each economy is modelled as a function of inflation and the unemployment gap (i.e. the difference between the unemployment rate and its structural level)1. In those economies with lower inflation rates and slack in the labour market, the Taylor rule implies an interest rate that could boost the economy. As can be seen in the graph above, in the cases of Sweden and Denmark, the Taylor rule has been suggesting a gradual rise in official interest rates for some months now, the opposite to the decisions recently adopted by the respective central banks. Should they remain tied to the ECB's strategy, the difference between the optimum interest rate in accordance with the economy's internal conditions and the interest rate established by the monetary authority is likely to go on growing as both Nordic economies gain traction. The consequences of this divergence represent a risk to the financial stability of both countries: should accommodative monetary conditions continue for too long, this could lead to the price of some financial assets and real estate overheating, as well as encouraging higher levels of debt in a private sector that is already notably leveraged, with a debt to GDP ratio of 257% in Denmark and 265% in Sweden (compared with 202% and 113% in Spain and Germany, respectively).

In an increasingly globalised financial world, the ECB's monetary policy has a great influence on the decisions of the rest of Europe's central banks. It is crucial for these economies to adopt measures to reduce the effects of excessively accommodative monetary conditions. The design of macroprudential policies could help to reinforce the sustainability of banks and correct the high level of debt in the private sector. In this respect, the creation of the Financial Supervisory Authority in Sweden and its initial recommendations to reduce the high level of mortgage debt among households (for example, by reducing the average length of mortgages, which are very long, or by removing tax breaks for purchasing a home) are an attempt to achieve this goal. However, it is vital for central banks to remember that, although these measures are important, they are not enough on their own to prevent imbalances resulting from excessive dependence. Otherwise they may be putting their financial stability in jeopardy. 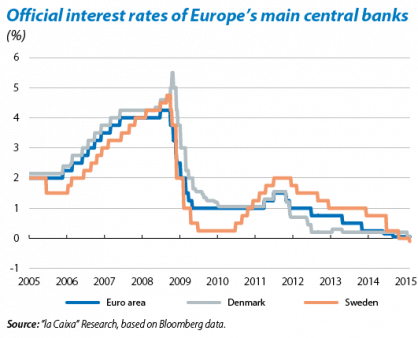 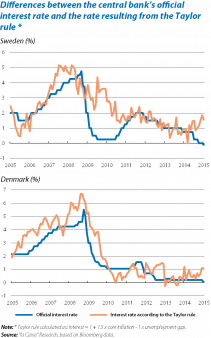