ECB liquidity in the core and periphery

The euro area's recovery is continuing with a more balanced economic performance than in the years prior to the crisis. This has been helped by the correction of part of the trade imbalances between European economies. However, there are still some financial imbalances that continue to reflect significant differences between the core and periphery of the euro area.

From the creation of the euro up to the outbreak of the financial crisis, strong growth in investment in Europe's peripheral countries was largely financed by foreign resources. The core countries, whose level of savings
was higher than their domestic investment, were the main creditors. Although, since 2011, the periphery
has corrected its external deficit, as indicated by the prevailing flow of current account surpluses in the balance of payments since 2013,1 the existing stock of external debt continues to characterise the peripheral countries as economies that need to obtain (re)financing while the core countries still have a high savings rate.

This dichotomy can be seen in the different use made of the liquidity instruments provided by the European Central Bank (ECB) by the economies in the core and periphery of the euro area. On the one hand the ECB offers liquidity via loans granted to the banking sector through refinancing operations (called MROs, LTROs and TLTROs). On the other hand banks can also store resources with the ECB's deposit facility and receive interest (although the interest rate is currently negative).2 As can be seen in the two graphs, the peripheral countries have taken advantage of the ECB's liquidity injections but have hardly placed any deposits with the ECB. The core economies, however, require far fewer loans from the central bank but make up the most of the resources stored with the ECB. While the ECB's financing is ending up mainly in the periphery, the core continues to have a high level of savings.

The ECB's instruments have been employed differently by the core and periphery constantly since the financial and sovereign debt crisis. After the shut down of the interbank market and, given the periphery's need to finance its, at that time, current account deficit, it had to resort to the ECB, which began significant injections of liquidity via refinancing operations.3 In the core, however, the banking sector liquidated a large amount of the assets it held in the periphery and, as there were few attractive investment opportunities, stored its liquidity with the ECB's deposit facility. Moreover, as from the beginning of 2015 and with the start of QE, an increase has been observed in core deposits with the ECB, suggesting that the liquidity received by its banking sector is being parked, at least partially, with the deposit facility.

In summary, the recovery of the euro area is moving in the right direction thanks, among other factors, to
the correction of trade imbalances between countries. However, the crisis has left its mark on the financial imbalances which still exist and can be seen in the different use made of the ECB's liquidity instruments, with a periphery that is monopolizing the loans offered by the central bank and a core that, lacking better investment opportunities, is continuing to park its resources with the ECB's deposit facility.

3. The maximum reached in 2012 was due to the introduction of two LTROs with 3-year maturity carried out in December 2011 and February 2012. 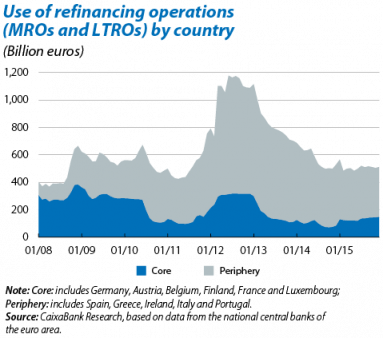 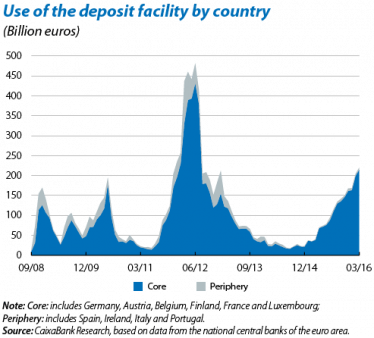