The ECB makes a move

After several months postponing the inevitable, at its June meeting the ECB decided to launch a new package of monetary stimuli. Mario Draghi's repeated comments insisting that he was prepared to act had created huge  expectation and the announcement did not come as a disappointment. The number and variety of measures give credibility to the words of the ECB President. We will now describe these briefly to analyse their potential impact.

The range of instruments chosen by the ECB has been extensive. The most conventional measure was the reduction in the Refi rate from 0.25% to 0.15%, a new historical low level, but more important are the reductions in the interest rate on the deposit facility (from 0.00% to –0.10%) and the interest rate on the marginal lending facility (from 0.75% to 0.40%). These reductions have two broad aims: to narrow the range of fluctuation of the EONIA interest rate (the overnight interbank interest rate) and therefore its volatility; and to penalise surplus liquidity kept by some banks in the ECB and thereby boost lending. Another measure implemented is the extension of the main refinancing operation as fixed rate tender procedures with full allotment until December 2016. Lastly, also in this category of somewhat  conventional measures, the President announced that the ECB would suspend the weekly fine-tuning operation  sterilising the liquidity injected under the SMP, which should inject more liquidity into the markets.

In the category of less orthodox measures, the ECB President announced the start-up of long-term refinancing operations targeted on credit (TLTROs). Specifically, quarterly TLTROs will be held from September 2014 to June 2016, all at a very low fixed interest rate (the Refi rate plus a spread of 10 basis points) and with maturities of up to four years (September 2018). The first two TLTROs will be subject to a maximum entitlement equivalent to 7% of total loans to the private sector1 at 30 April 2014. In these two auctions, the ECB expects to inject a maximum of 400 billion euros. The procedure is a little more complex for the subsequent TLTROs: all counterparties will be able to borrow up to three times the amount of their net lending2 to the private sector during the months leading up to the auction. The ECB also announced that it will set the minimum growth in lending required for those counterparties wishing to access these TLTROs to ensure the liquidity injected reaches SMEs. These requirements have to be analysed very carefully as the success of this measures depends on them.

In general, therefore, the measures announced guarantee a source of financing at a low price for a long period of time, which will undoubtedly strengthen the recovery in lending over the coming years. But we should remember that, in order to improve the economy's lending capacity, it is still vital to reduce regulatory uncertainty, a particularly important factor this year in which asset quality reviews and stress tests are being carried out on banks. Any growth in lending is also still limited by solvent demand for credit, an aspect which the top monetary authority can do little about.

There can be few doubts, however, that Mario Draghi's press conference in June was yet another sign of the ECB's firm commitment to economic recovery and price stability. In fact, in addition to the aforementioned measures Mario Draghi also announced that the ECB is preparing itself to consider, if necessary, purchasing ABS with underlying assets of loans to SMEs, something that had been unthinkable until very recently. As happened in the summer of 2012 with the famous «whatever it takes», renewed confidence in financial markets has been noticed and the cost of financing, especially public debt, has fallen. Over the medium to long term, however, it is vital for the most backward countries in this respect to continue carrying out structural measures to underpin their growth, and for governance of the euro area to get stronger. If this does not happen, whatever the ECB does will be of little use.

2. Net lending is understood as new loans minus loans redemptions. 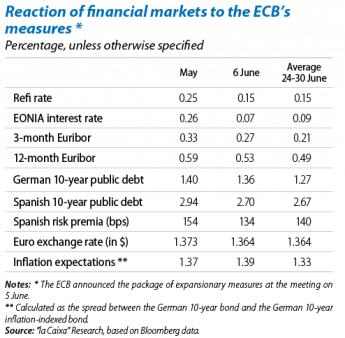