Monetary dilemmas in an interdependent world

The current monetary panorama is considerably complex and with few precedents, if any at all. The fact that many central banks have set negative interest rates (Japan, Sweden, Denmark, Switzerland and the euro area itself) is an anomaly in historical terms. Also unprecedented is the extremely varied assortment of public and private assets accumulated by many central banks, and up to exceptional levels (note that the Bank of Japan’s annual public debt purchases are equivalent to 16% of the country’s GDP). Since we generally call this whole battery of measures simply «unconventional monetary policy», perhaps we have become somewhat desensitised to the atypical nature of the situation and have tended to ignore the risks involved. Risks that affect not only the countries carrying out such policies but also those within their environment.

In fact, in a globalised financial world the monetary policy implemented by countries at the core of the international financial system has a huge effect on their peripheral partners. This is the case, for instance, between the financial centre par excellence, the US, and the countries of Latin America. Or between the euro area and its neighbours in the EU which do not share the single currency. Given this situation, when the knot begins to tighten (i.e. when full monetary normalisation begins), what some countries feel as gentle pressure will perhaps be more like strangulation in others. Such a situation is particularly likely to occur in those economies benefitting from ample capital inflows under highly beneficial conditions (typically in dollars or euros, which have tended to depreciate against their own currency and at slightly lower interest rates than the national one), debt which they will have to repay or refinance within a context of more adverse international financial conditions.

Is such concern exaggerated? In order to answer this question we need to accurately calibrate the channels (both real and financial) through which monetary policy is transmitted internationally, an exercise carried out by the article «Monetary policy: from independence to interdependence» in this Dossier. We must also examine in depth the role played by the banking sector in this transmission, a task undertaken by the article «Bank globalisation and the international transmission of monetary policy» in this Dossier. Clear instances of how extensively monetary policy can be passed on from one country to another are provided by the recent cases of Sweden and Mexico.

Regarding the Scandinavian country, by mid-2010 it had already recovered quite well from the shock of the Great Recession of 2008-2009 (growth in 2010 would end up being 6% compared with 2.1% in the euro area) and evidence of inflationary pressure building up (at the beginning of 2010 Sweden’s inflation was 2.7% year-on-year while it was just 0.9% in the euro area) justified a gradual but continued hike in the official interest rate by its central bank (from 0.25% to 2.0%). This measure notably diverged from the ECB’s accommodative monetary policy which, in 2010, kept the benchmark rate at 1%. The immediate result was substantial appreciation in the Swedish krona of approximately 20%. However, at the end of 2011 the Riksbank, Sweden’s central bank, made a U-turn and, although national conditions did not seem to warrant it, embarked on a process of monetary accommodation which has taken the benchmark interest rate to –0.50%. Given this situation, there are growing concerns that such ultra-accommodative monetary conditions could jeopardise the country’s financial stability, especially as the resulting liquidity is fuelling an economy that already has high levels of private debt (237% of GDP in 2015) and a sharp increase in asset prices (growth in Swedish house prices in 2016 Q1 was 12.5% year-on-year, the third highest in the EU).

This is a clear case of monetary policy in the core economically affecting close countries, a factor that impacts and even erodes the monetary independence of the central banks of peripheral and smaller economies. And in the emerging countries? Does the core’s monetary policy also have such a decisive effect? The answer is also in the affirmative. One case in point is Mexico. Mexico obviously has very close economic ties with the US, to the extent that there is a strong correlation between both countries’ activity cycles. But this general evidence does not mean that US monetary policy is right for Mexico all the time. In particular, since 2014 the asymmetrical impact of the slump in oil prices has required a different response by monetary policy. While the US is currently within mature phases of the cycle, with upward inflation expectations and incipient wage tensions, Mexico has recorded lower growth than predicted with inflation clearly below the forecasts (in fact it is at an all-time low). In spite of this situation, which would suggest that, although the Fed may continue with its monetary normalisation, Banxico should keep its monetary policy more accommodative for some time, it is true that the overwhelming consensus among analysts is that Mexico simply has no option than other to follow in the footsteps of the Fed to prevent the peso from depreciating dramatically against the dollar. Once again the main reason does not come from domestic conditions: it is due to the importance of commercial and financial relations between the US and Mexico.

In the last few years, and in particular since the Great Recession of 2008-2009, Mexico has undergone a twofold process that has tightened its financial ties with the US and, to a lesser extent, with the rest of the world’s investors. The first is the rise in the country’s capital inflows. As explained in the article «Monetary policy: from independence to interdependence» in this Dossier, this is the main channel for transmitting monetary policy at a global level and, in the last few years, capital movements seem to have become more sensitive to expectations of changes in monetary policy in the core of the system. The trend in capital flows towards Mexico have followed the same pattern, a trend reflected in variables such as external debt which has gone from 17.3% of GDP in 2006 to almost 46% of GDP ten years later. A second factor, related to the previous one, is that the Mexican peso is now being used more widely internationally, especially in the financial area: according to the BIS, whereas it was the fourteenth most widely-used currency in 2001, by 2013 it had climbed to eighth position. Taken as a whole, these two elements have made the Latin American country’s monetary policy less independent. Banxico itself implicitly assumes that it cannot oppose this restrictive context on repeating in its communication that two crucial aspects in its monitoring of the financial situation are following the interest rate spread with the US and the trend in exchange rates (a key variable in international monetary transmission). Just as important is the assertion made by the central bank on more than one occasion that delaying monetary tightening could jeopardise the country’s financial stability.

This risk for financial stability could increase if it occurs within a local context of excessive debt. We should note that this is the situation of many emerging economies that have seen strong growth in private debt over the last few years. This situation gets even worse when debt increases via financing in a strong currency (the dollar in the case of Latin America, the euro in that of emerging Europe). This is the situation of China and Brazil, among others, which have recorded strong growth in corporate debt in dollars precisely in response to more accommodative financing conditions resulting ultimately from the Fed’s monetary policy. As the US monetary normalisation progresses, some companies will find it increasingly difficult to repay or refinance this debt.

This situation is repeated in emerging Europe but with two particular features. Firstly, here households have also taken out mortgages in foreign currencies (euros and Swiss francs) in addition to corporate debt. The second characteristic is that, in this zone, the risk of financial instability has gone from highly diffused to very high. Poland exemplifies this situation. At the beginning of 2016 close to 45% of all outstanding mortgages was in euros in Swiss francs, equivalent to 9.3% of Polish GDP. As a result of the zloti’s depreciation against the euro and Swiss franc, the government is facing the dilemma of allowing consumers to handle this increase in financial pressure or to pass on such costs towards its banking sector, forcing mortgages to be converted into zloties under favourable conditions for households. Initial proposals point to an extreme version of this second solution which, should it be applied, most Polish banks would simply not be able to afford.

It is important to remember that the excessive accumulation of debt is, among other factors, the result of economic agents responding to the incentives produced by the anomalous monetary situation we mentioned at the beginning of this article. This is not the only unwelcome result of the ultra-accommodative monetary policy implemented by advanced countries but it certainly is one of the most tangible outcomes. Given the uncertainty surrounding the move into unknown territory represented by the exit of unconventional monetary policy, is there any way to mitigate the risks to global financial stability? The most obvious would be for a greater degree of coordination between central banks and, at a broader level, between the economic policies of the main economies. At a regulatory level, and as argued in the article «Policies to coordinate the monetary and financial system» in this Dossier, coordination would be highly desirable. Unfortunately, and also as this article concludes, it is reasonable to doubt whether such coordination can actually be achieved. 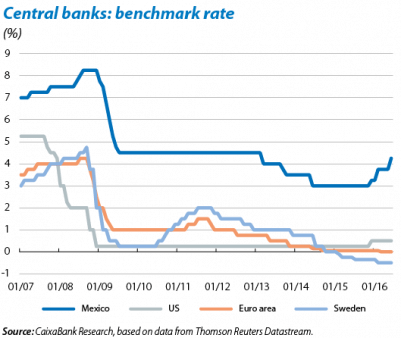 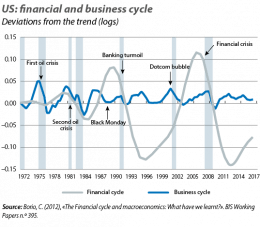 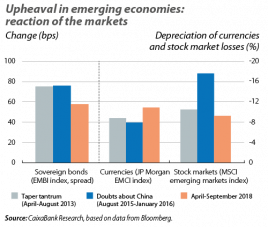 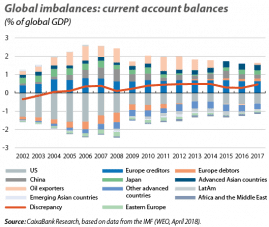 The role of global imbalances 10 years on