Monetary policy in 2017: a promising journey, but hurdles lie ahead

2016 was meant to be the year when the US Federal Reserve (Fed) took a definitive step towards monetary normalisation with a sustained pace of interest rate hikes. The Bank of England (BoE) would be the first to follow while the European Central Bank (ECB) and Bank of Japan (BoJ) would begin preparations to withdraw their asset purchase programmes (the first step towards raising interest rates).

However, having reached the end of the year, the Fed’s interest rate hike has not progressed as quickly as expected and the other central banks have reinforced their expansionary measures even further. The macroeconomic indicators do not warrant such hesitation: in the US, unemployment is practically at its equilibrium level and core inflation is close to 2%, while the euro area and Japan have continued to progress gradually and the UK has seen a good rate of growth in spite of being burdened by Brexit. The decisions taken by these central banks have been based on a new and increasingly important factor, uncertainty, in the face of which they have chosen to act prudently.

In 2017 the macroeconomic outlook for the advanced economies is once again favourable: we expect growth of 2.3% for the US and 1.4% for the euro area while inflation will consolidate at levels closer to central bank targets, boosted by activity and by the fact that the slump in oil prices is now behind us. 2017’s macroeconomic scenario therefore underlines the need to continue with monetary normalisation in the US and opens the door to less intervention by the ECB. This scenario is not without its risks but one of the biggest, the expansionary fiscal policy which Donald Trump might implement, could actually accelerate monetary normalisation. To understand why, we need to examine the outlook for the advanced economies in greater detail.

The current expansionary phase of the US economy is the third longest since 1945, activity has been growing apace since 2010, unemployment is low and the underlying trend in prices reflects a sustained increase in inflation. Although the traditional rules of monetary policy have been recommending interest rate hikes for some time now,1 the Fed has maintained an environment of extraordinarily accommodative financial conditions. There are good reasons for this. Firstly, the extent of the Great Recession removed workers from the labour market who are now joining it again, acting as a brake on wage pressures. Secondly, the Fed believed that the risks involved in an interest rate hike, which might have cooled the economy down, were greater than those of postponing such hikes. The Fed has applied this rule of asymmetrical risk for the episodes of uncertainty experienced in 2016 and this explains the slowness of its normalisation to date, particularly given the global repercussions of its decisions.2

However, in the more mature phase of the cycle the US is currently going through, with a consolidated recovery, inflationary pressures are starting to be observed and, after years of accommodative monetary conditions, the risks of financial instability are gaining ground. Moreover, the transmission of monetary policy is not immediate and the Fed must therefore anticipate the economy’s needs. Aware of this, in 2017 it will continue raising interest rates but at a more sustained pace, balancing the need to prevent the economy from overheating with the risk of growth cooling down. In reaction to the Fed’s normalisation, it is particularly important for the adjustment of financial markets to be orderly.

In fact, we already observed the first signs of this adjustment in financial markets after Donald Trump was elected as President of the US: given the expectations of a more expansionary fiscal policy the market has quickly assumed that, from now on, higher interest rates will prevail. This readjustment of expectations has led to an upswing in interest rates on US long-term debt which is largely due to an increase in inflation expectations (as can be seen in the first graph, the rise has been substantial, placing them almost at the Fed’s target). At CaixaBank Research we expect a pragmatic implementation of Trump’s agenda, given that he needs the support of Congress (at least the moderate wing of the Republican Party) and he won by a very slight margin. Moreover, the pace of legislative procedures will probably delay any substantial fiscal expansion until the end of 2017. We therefore expect a moderately expansionary fiscal policy without any huge impact on growth or inflation, which is in line with the reaction observed in the markets. Given this outlook, the Fed is free to continue with normalisation as planned (and even somewhat more confidently, given the respite provided by fiscal policy).

However, this change of scenario in financial markets also reflects an increase in risk.3 Specifically, a more expansionary fiscal policy could result in larger increases in inflation expectations for which the Fed would have to speed up the pace of its interest rate hikes. In a more extreme and less likely scenario, but which nevertheless affects market valuations, more aggressive action on the part of Donald Trump on all fronts (fiscal, commercial, immigration and international geopolitics) could lead to a loss of confidence at a global level and force the Fed to combat tougher financial conditions and, at the same time, inflationary pressures.

In the euro area, the scenario for monetary policy will be dictated not only by the domestic situation but also by the contagion caused by the US. At a domestic level we expect the recovery in activity to continue at a similar pace to that of 2016 and that, free from the burden of the energy component, inflation should end 2017 above 1.5% thanks to the growth in domestic demand. This outlook should allow the ECB to begin to withdraw QE during the year and plan the first interest rate hikes for the medium term. Given this solid domestic situation, the risks will be external. On the one hand, because of the global importance of the Fed, monetary normalisation in the US could produce contagion and toughen up financial conditions in the euro area. To gauge the size of this effect, we have analysed the impact of the Fed’s monetary policy on the euro area’s financial conditions. As shown by the second graph, the Fed’s actions not only affect US long-term interest rates but, with a sensitivity of around 50%, also influence the interest rates of European countries: for example, a decision taken by the Fed that pushes up the yield on US 10-year debt by 10 bps typically results in an increase of 5 bps in the yield of 10-year German debt. However, our analysis also indicates that the short tranche of the European curve is not affected. Given this sensitivity and if the Fed’s normalisation goes as expected, the ECB should not find it difficult to maintain appropriate financial conditions in the euro area if it communicates its monetary policy properly. On the other hand, the many different elections taking place in 2017 in Europe, together with populist parties that can influence the political agenda even if they are not elected to government, imply a higher likelihood of more expansionary fiscal policies in Europe as well. Given this situation, the ECB might also feel more comfortable about starting to withdraw its extraordinary stimuli of monetary policy.

In summary, 2017 is starting off with a reasonably good macroeconomic outlook which is therefore also favourable for an orderly normalisation of financial conditions. The uncertainty that still surrounds the macroeconomic scenario notwithstanding, we are approaching a situation in which monetary policy will not be as accommodative in the future as it has been over the last few years.

2. One additional reason given by the Fed is a fall in the equilibrium interest rate (the rate which neither slows down nor speeds up activity). This would put the value at which the Fed has currently set the effective rate closer to that of the equilibrium rate and conditions would therefore be more accommodative than they seem.

3. At the same time as the increase in interest rates and inflation expectations, there has also been an increase in the bond term premium. 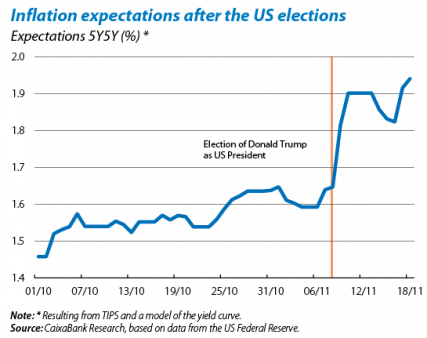 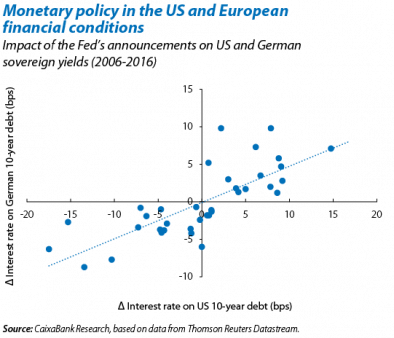