Monetary policy is undergoing a revolution. Recent events have led central banks to take exceptional measures, some of them unthinkable before the crisis erupted. Proof of this is the fact that their balance sheets have ballooned to remarkable levels. However, what might lead to an even more radical change in monetary policy is the adoption of new targets. This lies at the heart of today's debate regarding the role that should be played by central banks in promoting economic growth and financial stability, both highly desirable given the current economic outlook.

Over the last 20 years, most central banks have targeted inflation. Their argument was that this would ensure price stability and promote a stable macroeconomic environment for sustained, balanced growth. It is undeniable that inflation is, and will continue to be, an essential target of monetary policy. And, in fact, this more orthodox view still has many supporters. However, the global financial crisis that started in 2007 highlighted the fact that moderating the prices of consumer goods does not necessarily mean the prices of other assets, such as financial or real estate, will follow suit (see the graph below). After a period of excessive liquidity, speculative bubbles were generated that, when they burst, had serious consequences for financial stability.

Moreover, the economic situation that followed this period of financial turbulence has meant that most developed countries are growing below their potential. Once again, central banks have managed to keep inflation close to its target level but they have not managed to stop the economy from stagnating. All this has raised doubts as to whether meeting an inflation target is the best strategy to achieve the ultimate goals of economic growth and job creation. And, consequently, increasingly more people believe there is a need to redefine, or even change, the targets of monetary policy.

The first to make a move has been the United States Federal Reserve (Fed). In an unprecedented step, the Fed announced last December that it would continue its expansionary monetary policy until the unemployment rate falls below a specific target, namely 6.5%, provided medium-term inflation does not go above 2.5%. With this act, the Fed has demonstrated its commitment to fulfill its twofold mandate, which not only consists of maintaining price stability but also promoting full employment. In short, this is the first time an explicit employment target has been adopted in addition to an inflation target, in order to place the achievement of both mandates on an equal footing.

In spite of this significant change, many want much more, namely redesigning the focus of monetary policy at its roots. One of the proposals gaining most supporters consists of changing the current inflation target for one of growth in nominal GDP.(1) The appeal of this target is that it does not distinguish between inflation and real GDP growth. Should a shock reduce real GDP growth to below its potential level, this new rule would allow for more expansionary monetary policy even though this might entail a rise in inflation. In this way, the central bank would smooth out macroeconomic fluctuations at the expense of more volatile inflation. Reviewing the trends shown by the latest figures, the central bank could commit to maintaining a nominal GDP growth rate, for example 4.5%, with around 2% corresponding to inflation, close to the current target, and 2.5% to the potential growth in long-term real GDP. The graph below shows that growth in nominal GDP has followed a similar pattern in the United States since 2010.

And while, in the previous case, the dilemma revolves around the priority given to inflation and employment, a second source of debate involves how to redefine monetary policy's framework in order to give greater weight to another of the functions that also belongs to the central bank: safeguarding financial stability. In this respect, some policymakers support a policy that systematically takes asset prices into account, especially real estate and financial, in order to stop speculative bubbles from forming.

Actually, this debate is not new. The Fed extensively discussed the role of monetary policy in such situations back in the time of Alan Greenspan. On the one hand, it recognised the impossibility of detecting bubbles ex ante due to the difficulty in discerning when asset prices go above their fundamental value. On the other hand, the required increase in interest rates to deflate bubbles was so high there was a huge risk of causing a deep recession. The consensus reached was therefore that the only alternative was to act ex post; i.e. to adopt an expansionary monetary policy once the bubble had burst. This strategy is known as «mopping up», illustrating the idea that the central bank's role is simply to clean up the mess after the explosion.

Given the devastating consequences of this mop-up strategy, those defending the view that central banks should act to deflate bubbles, known as «leaning against the wind», are quickly taking up a position to win the contest. It has been acknowledged that interest rates are not a very effective tool in this respect and, consequently, it has been decided to adopt a new framework to manage systemic risks: macroprudential policies.

An intense debate is also raging regarding which tools should be used. For example, measures have been proposed such as establishing loan-to-value credit restrictions, thereby stopping excessive credit from pushing prices up over and above their fundamental value. Although a wide range of macroprudential instruments have been considered, there is still no consensus on which ones might be more effective, or on how to combine them to mitigate systemic risks.

Even when a set of instruments is agreed upon, their application is not exempt from problems. Firstly, economic policy decisions are less transparent as there are many different tools available to achieve a range of targets, so central banks have to make an even greater effort in their communication. It is important to remember that the effectiveness of monetary policy depends, to a large extent, on its capacity to affect the expectations of economic agents, so it is vitally important they can interpret the central bank's decisions. Secondly, and perhaps even more importantly, these tools have direct effects on the value of certain assets, real or financial, and that could harm certain sectors or stakeholders that might oppose their implementation. This could make them difficult to apply, being politically costly, and reduce their effectiveness. Given this situation, it unquestionably becomes more crucial to guarantee the central bank's independence.

In short, paradigm shifts, such as those proposed, could improve economic growth and financial stability. However, we mustn't forget that these are not free from risk. What might be at stake is the credibility of central banks as guardians of price stability. And this should be contemplated with extreme caution.

(1) This proposal has been supported by Professor Michael Woodford, of Columbia University, and by Professor Christina Romer, of UC Berkeley. Some sympathy for this proposal can even be seen from official spheres, as shown, for example, by a recent speech by the Fed Vice Chair Janet Yellen.

This box was prepared by Judit Montoriol-Garriga 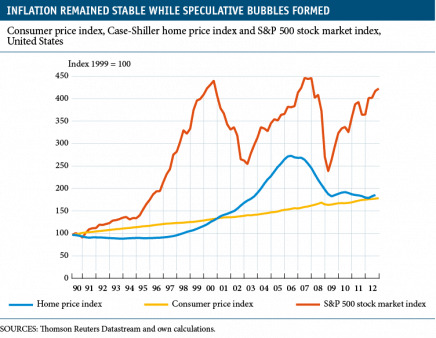 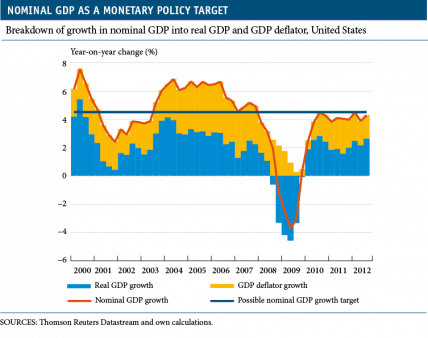