Almost one year after announcing quantitative easing (QE), the euro area as a whole is undergoing moderate but sustained growth with inflation around 1% (excluding the price of energy). Although there are differences between countries, this scenario resembles the forecasts provided by the ECB itself once QE had started. So why is Draghi going to expand the programme? Is it because, in its current format, it is not being implemented as initially planned? Is it because its impact has not been as expected?

After adopting heterodox monetary policies in 2014 via TLTROs and the private sector purchase programmes known as ABSPP and CBPP3,1 in January 2015 the ECB introduced its public sector purchase programme (PSPP).2 The ECB thereby undertook to buy up the sovereign bonds of countries in the euro area of up to 50 billion euros a month (plus 10 billion a month on securities in the ABSPP and CBPP3 programmes).3 Purchases began in March 2015 and will continue, at least, till September 2016, although the programme is open-ended and depends on inflation achieving a path towards its target of 2%. As can be seen in the graph, the purchases have met their target volume every month except in August,so the programme is being implemented as per the ECB's plans.

Moreover, the impact seems to be positive. As we can see in the table, the ECB's purchases have managed to push down sovereign rates in general, mainly benefitting the periphery countries. This decrease in interest rates has also helped to reduce the cost of credit for companies and households, while the euro has depreciated against the main currencies (mainly in the first half of the year) and inflation expectations have improved. Growth in activity is still moderate and inflation remains weak but the experience of other countries suggests that the effects of QE on these variables will emerge in the medium term. In any case part of the weakness in inflation comes from low oil prices and one positive note is that this has not caused any widespread deflation in other goods or services. Lastly, the announcement of QE also led to gains in the stock market.

Nevertheless, new external risks have emerged (specifically the slowdown in emerging countries and the effect of the upcoming interest rate hike in the US, in which case the ECB may wish to emphasise the divergence between monetary policies) which could slow down the recover of inflation towards its long-run goal. The ECB may therefore decide to expand QE at its next meeting in December with the aim of reinforcing the positive performance shown by domestic demand and to counteract the weaker push expected from the foreign sector should risks materialise. This expansion of QE could take several directions: a longer period of implementation, a higher volume of monthly purchases or by expanding the list of eligible assets. The ECB might also lower the deposit facility rate even further. In any case, given that QE is progressing according to plan and the economy is behaving as expected, no huge expansion seems required. In this respect, the ECB's decision should take into account its self-imposed limits to purchases and how effective any expansion might be in an environment where interest rates are already very low.

3. Limits were also set of 25% for each issuance (increased in September 2015 to 33% for most assets) and 33% of total issuances in order to prevent the ECB from being able to from a blocking coalition in the case of restructuring and to limit its influence on price formation. 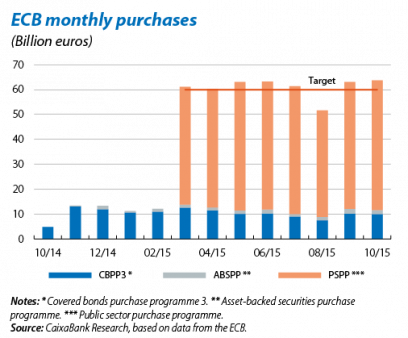 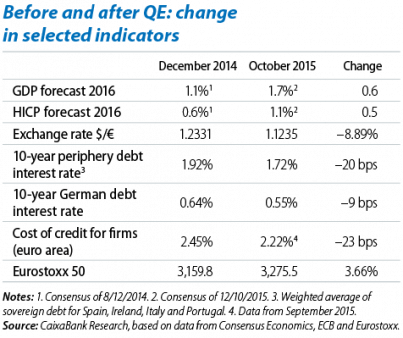