Paul Samuelson used to say that good questions outrank easy answers.1 His nephew, Larry Summers, seems to have come up with a very good question, at least judging by the commotion it has caused. The former US Treasury Secretary has asked why real interest rates are so low and, above all, why they are expected to remain low for such a long time. The answer is as provocative as it is worrying: it suggests we are embarking on a new era in which the growth rate is likely to be much slower than what we are used to: what economists call secular stagnation.

It is not easy to calculate real interest rates as inflation expectations must be deducted from the nominal interest rate and these are difficult to measure. In a recent article, M. King and D. Low estimated the trend in the real interest rate for a large number of countries with the aim of obtaining what they call the world real interest rate.2 As shown by the first graph, during the 1980s and 90s this was relatively stable but, at the turn of the century, a marked downward trend started which became even sharper with the advent of the financial crisis. This is therefore a far-reaching phenomenon, both in the number of years it has been occurring and the number of countries it affects. Debate regarding the possible causes of this trend is not new, especially concerning the years prior to the crisis, and three explanations have received the most support. Firstly, an increase in savings at a global level from the emerging and oil-producing countries. Secondly, a shift in investor preference towards assets considered to be safer, such as debt, in detriment to riskier assets. Lastly, monetary policy, which was particularly lax during the pre-crisis years, has also been put forward as one of the determining factors.

The financial crisis merely increased the downward pressure on real interest rates. Monetary authorities have used all the tools available to maintain as accommodative a monetary policy as possible. They have also influenced credit conditions which, in the advanced countries, are generally stricter. As recently pointed out by the President of the Minneapolis Federal Reserve, Narayana Kocherlakota, this last circumstance has led households and firms to increase their savings as much as possible, pushing interest rates down even further.3 He also added another factor: a change in perceived macroeconomic risk. The relative lack of economic volatility over the last few decades, particularly in the developed countries, meant that most agents let down their guard, believing that volatility had become less of risk and one they did not need protection against. However, after the crisis households perceive the possibility of suffering a significant sustained loss of income from employment as greater, just as firms now accept that a sustained drop in demand is no longer so unlikely. The reaction to this new scenario, increasing savings as a precaution, has pushed real interest rates down even further.

Although these different reasons for falling real interest rates have not been formerly proven and we are therefore unclear as to their relative importance, they do seem to be satisfactory explanations. The debate now focuses on the outlook for the next few years. Judging by the markets, real interest rates will remain low for a very long time. In the US, for example, the implicit real interest rate for inflation-linked 5-year bonds stands at –0.2%, while the same bonds at 10 years are just 0.4 p.p. higher.4

According to the IMF, real interest rates will pick up but only very slowly, taking years to return to their pre-crisis  levels.5 The institution gives several reasons for this opinion. Although the lower growth predicted for emerging countries will reduce excess savings, it will probably not push up interest rates to any great extent. Moreover, the IMF adds that the investment factor in development countries is unlikely to exercise much upward pressure as this is expected to recover very slowly, as is typical after a financial and real estate crisis. Lastly, idle production capacity is and will continue to be very high in the developed countries for the next few years, so monetary policy needs to remain very lax.

Larry Summers' view for the US is more pessimistic.6 According to him, real interest rates would need to be negative for the economy to achieve full employment and inflation to reach around 2%. His estimate is essentially based on the observation of two facts. Firstly, during the years prior to the crisis, although interest rates were low there were no inflationary pressures, nor was the unemployment rate particularly low or industrial capacity utilisation particularly high. Secondly, after the recession, the recovery is taking much longer in spite of being supported by very low interest rates and, at present, there is still very little inflationary pressure. Given this situation, he notes, it is difficult to go on stimulating the economy through monetary policy. He believes the only way to boost growth significantly is via fiscal policies that stimulate private demand. Larry Summers' provocative speech has encouraged voices in favour, such as the Nobel laureate for Economics, Paul Krugman, as well as, naturally, several voices against his proposals. For Kenneth Rogoff, for example, the factor limiting growth in most developed countries is the irremediable deleveraging they have to carry out.7

In short, Larry Summers has certainly asked a good question but the answer is far from conclusive. However, there is some consensus in that the recovery will be slow and that real interest rates will consequently remain low for some time. If this scenario comes about, certain financial and real estate assets will probably come under pressure, as analysed by the rest of the articles in this Dossier. However, we should remember that, at the end of the 1930s, theories about economic stagnation were also popular in the US, just before its economy went through a long period of growth and prosperity.8 Surely, just as growth is usually accompanied by optimism, big crises can also be accompanied by an excess of pessimism. 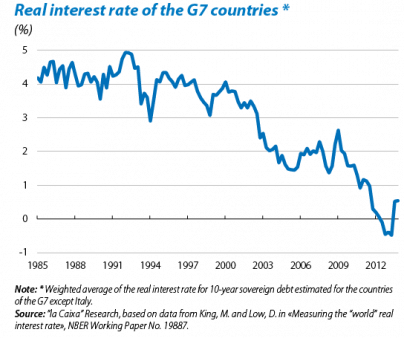 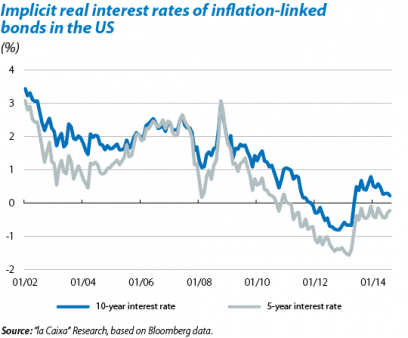