The «sense and sensibility» of the ECB’s communication

• Communication is one of the most powerful monetary policy tools. For this reason, CaixaBank Research has developed an index to measure the sentiment of the ECB’s statements.

• The index notes a significant deterioration in ECB sentiment between late 2017 and Q3 2019 and shows how geopolitical uncertainty has affected the ECB’s view of the economic outlook.

It is an (almost) universally acknowledged truth that communication is one of the most powerful monetary policy tools.1 This is illustrated by the market’s reaction to the ECB’s meeting last September, which showed a stark contrast between the moment when the monetary policy decisions were announced (1:45pm) and the reactions during the course of the press conference (2:30-3:30pm) in which Mario Draghi contextualised and justified the decisions with a detailed view of the economic outlook (including the new economic forecasts). Can we quantitatively analyse sentiment based on this and the other communications of the ECB?

The ECB sentiment index measures the pessimism or optimism given off by the press releases read out by the president of the ECB at the press conference that follows each monetary policy meeting.2 These statements, which are drafted to reflect the consensus view of the Governing Council,3 provide an assessment of the latest indicators (such as the latest economic activity figures or trends in financial markets), of the main risks and of the outlook for the euro area: in other words, they summarise the central bank’s view of the economic outlook.

To assess how optimistic or pessimistic these press releases are, as objectively as possible, we use two economic dictionaries that classify around 90,000 words into three categories: positive, neutral or negative.4 For instance, «strong» is a positive term and «weak» is negative, but «growth» is neutral (it could be «strong» or «weak»). In this way, we calculate the sentiment of each ECB meeting as the difference between the number of positive and negative words in the press release in question, normalized according to the total number of words in the statement:5

Despite the apparent simplicity of this computation, the second chart shows that our ECB sentiment index shows a strong correlation with euro area economic activity indicators (such as the Economic Sentiment Indicator [ESI] developed by the European Commission). Furthermore, its fluctuations predicted changes in the reference interest rate (before it stagnated at 0%).6

The ECB’s U-turn from a communication perspective

In addition to offering a sentiment indicator, the index allows us to better understand the U-turn made by the ECB in the last year and a half, during which it has gone from preparing for the first rate hike to launching a new stimulus package. In fact, in the second chart, a significant deterioration in ECB sentiment can be seen between late 2017 (when it had recovered to its highest levels in the last 10 years) and Q3 2019. Moreover, the decline in ECB sentiment has been much more marked than that of other indicators, posing the question as to whether the central bank’s pessimism is an overreaction or anticipates a further decline in the indicators.

This deterioration reflects a change in the description of the economic environment, with a reduction in the proportion of positive words used (a 30% decrease) and, in particular, a sharp rise in the use of negative terms (which have tripled). As shown in the third chart, the latter rose from 8 different words, with a total frequency of 25 occurrences, to 21 words, with a total frequency of 80 occurrences. Furthermore, the third chart also shows a deterioration in the «quality» of the negative terms: new terms appear, such as «weak», «prolong» and «persist» (reflecting the persistence of what was initially thought to be a temporary moderation in economic activity or increase in uncertainty), as well as «threat» and «protection» (a clear reference to the trade tensions). In fact, the loss of optimism (decrease in the use of positive words) and the rise in pessimism (intensification of negative terms) are the result of different patterns, as shown in the fourth chart: while the ECB gives continuity to its description of the positive trends in the economic environment (i.e. it uses the same positive words, albeit less frequently), the increase in pessimism is in response to the emergence of a new narrative (90% of the increase in negative words is due to the emergence of new terms).

What are these new terms? Even if the reader only follows the articles of the Monthly Report on economic outlook in passing, it will come as no surprise to see the appearance of terms related to protectionism in the third chart. As a result of trade tensions between China and the US, geopolitics – and in particular the uncertainty it generates – have become the key factor determining the economic outlook. The ECB’s view is no exception: as shown in the last chart, the use of the word «uncertainty» has intensified in all its public statements.

1. The article «Mario Draghi and his ‘parole, parole’» in the MR01/2018 analyses the power of communication as a monetary policy tool.

3. We exclude the section of questions from the press from the analysis.

4. The sources used are the Loughran/McDonald Dictionary (T. Loughran and B. McDonald, 2011, «When is a Liability not a Liability? Textual Analysis, Dictionaries, and 10-Ks». Journal of Finance, 66:1, 35-65) and the Federal Reserve’s Dictionary for Financial Stability (R. Correa et al. (2017). «Sentiment in Central Banks’ Financial Stability Reports». International Finance Discussion Papers 1203). It is necessary to use these specific dictionaries since, in other more general ones, words which are neutral from an economic point of view (such as «tax») are considered to be either positive or negative.

5. The ECB sentiment index is a standardised version of this indicator’s 12-month moving average, with diminishing relative weight (more importance is assigned to the most recent press releases).

6. For the period 2000-2014, the ECB sentiment index alone explains around 50% of the change in the 2-year reference interest rate. 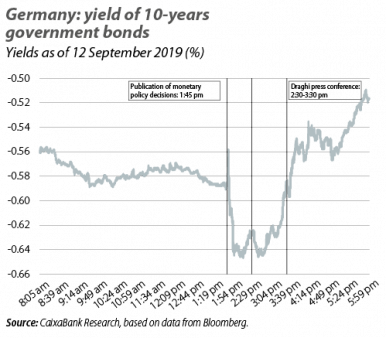 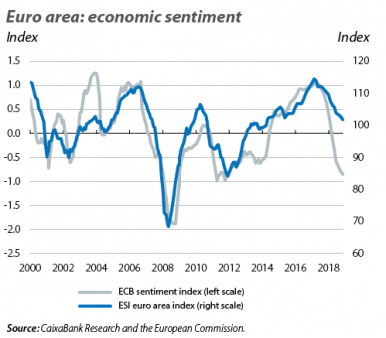 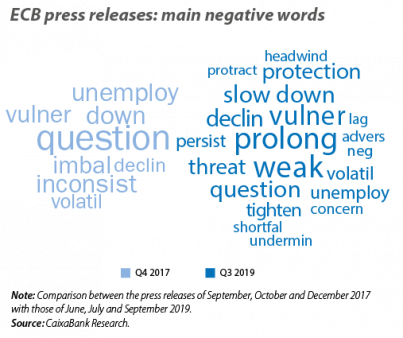 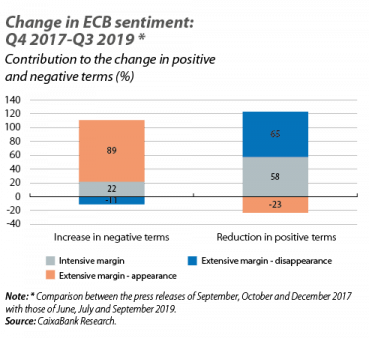 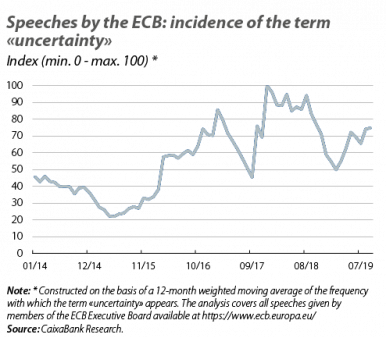