There are very different trends in the adjustment of current account imbalances in European countries.
The deficit of periphery countries has been reduced by almost 10 percentage points over the last 4 years. However, for the third year in a row, 2012's current account balance for those EU countries with a surplus exceeded 6% of GDP (the threshold as from which the European Commission considers a current surplus to be too high).(1) The further increase in the surplus occurring in the first few months of 2013 has intensified debate as to whether this imbalance should be corrected.

Those opposing any correction in the surplus claim it is the result of these economies' good competitiveness. In fact, four of them (Finland, Sweden, the Netherlands and Germany) are among the six most competitive regions
in the world.(2) This positive competitive position has allowed them to maintain a healthy export rate as they have been able to break into new markets when demand from their European partners shrunk. Although these countries' surplus of goods with the EU fell by 1.7 percentage points on average between 2008 and 2012, this was partly offset by their increased balance with the rest of the world.

Other factors that result in these countries having a significant current account balance are their higher per capita income and the structure of their population, with an older demographic. Both factors mean that the savings rate is higher. However, these differences compared to the EU average are not so great either.

In any case, these countries have a current account surplus that is larger than the one allowed by the European Commission and, if not corrected, they might finally be asked to take measures to boost domestic demand, with the consequent effect this would have on exports from the rest of the EU countries. By way of example, if households and firms in those countries with a surplus reduced their savings to levels similar to the European average, this would push up intra-EU exports by 1%.

In short, the large current account surplus held by some EU countries is mostly due to their great competitiveness and their population structure and, in this respect, does not represent too much of a risk. Moreover, neither
does it seem a good idea for the rest of the European countries to stake the future of their foreign sector on any boost to domestic demand in surplus countries, as the impact on trade would be limited. 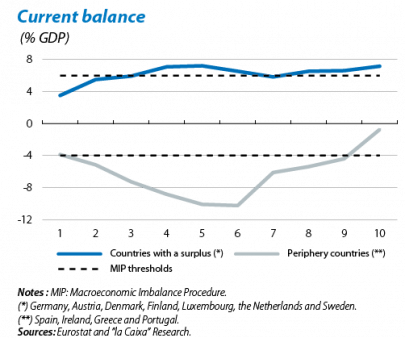 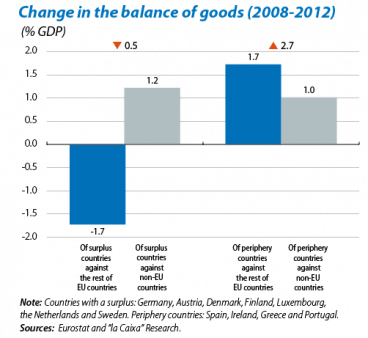 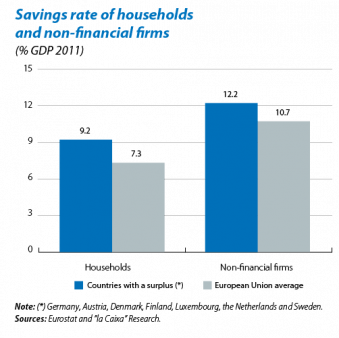