India: the roadmap for Narendra Modi

On 16 May, it was officially announced that Narendra Modi's Bharatiya Janata party had won the general election. It was a landslide victory: 282 seats compared with the 44 won by the Congress Party. This result put an end to the Nehru-Gandhi era, a virtual dynasty that had governed the world's largest democracy almost uninterruptedly for more than 60 years. Narendra Modi, an ascetic who does not belong to the urban elite of India's previous leaders, has two sides to him. There is a reformist Modi who puts health before devotion, prioritising spending on hygiene and administrative transparency above the veneration of temples. But there is also a Modi with a past linked to radical Hinduism whose worst moment was his role as senior governor of the state of Gujarat during the disturbances between Hindus and the Islamic community in 2002. Which Modi will prevail now? Judging by the gains in the Mumbai stock market and the appreciation of the rupee after his victory was announced, the markets and analysts seem to be clearly betting on the reformist Modi.

Modi is faced with an India that is a behemoth with huge growth potential. It is the second most populous nation on the planet and the third in terms of its GDP in purchasing power parity (the 13th in dollars at market prices). India multiplied its GDP by five between 1993 and 2013, with notable development in the services sector and 12 of its companies in the FT500 (Germany has 20; Spain 6). Similarly, the forecasts given by leading organisations such as the IMF place India's long-term growth close to 7% annually, higher than China's. But India is also the country with the largest number of poor people in the world. According to the World Bank, 295 million Indians (24% of the total) survived on less than 2 dollars a day (in purchasing power parity) in 2010, compared with 121 million Chinese. India's per capita income is one fifth of China's, investment in infrastructures and manufacturing has yet to materialise and the public sector is particularly inefficient. Modi's parliamentary majority gives him free reign to undertake a programme of reforms that needs to be ambitious. The aim is to remove the obstacles that are preventing the country's huge potential from being exploited. More doubtful are the details of the roadmap to reach the desired destination. There is a risk is getting lost along the way or getting stuck. A recent article by the consulting firm McKinsey contains interesting proposals in this respect.

The Gordian knot is how to escape from the poverty trap. In fact, this problem is considerably more serious than suggested by the statistics regarding the 2 dollar a day threshold. McKinsey uses the term «empowerment line» to express the minimum income that provides access to the most basic health and hygiene, lighting, energy for cooking, primary education, a diet of 2,100 calories a day, drinking water and a home measuring between 21 and 28 m2. According to McKinsey, 680 million Indians (56% of the population) fall below this empowerment line (which would place monthly expenditure at 1,336 rupees) or, in other words, they do not have access to the aforementioned basic services.

Although Modi's ample victory provides him with a mandate without the need to compromise with other political forces, it would be preferable if reforms to tackle the problem of poverty were inclusive. Reducing the share of the population below the empowerment line would be the equivalent of creating an Indian middle class, as is already happening to a greater or lesser degree in other emerging countries of East Asia. The inclusive reforms that Modi should tackle are based on four fundamental pillars: increasing employment (the participation rate), raising farm productivity, reinforcing public spending on the aforementioned basic services and introducing reforms that ensure this spending on services reaches the right recipients.

The first pillar, creating jobs by increasing the participation rate, would have the greatest quantitative effect. In 2012 India's participation rate was 58% (for the population aged between 15 and 64, according to the World Bank), while the figure for the whole of emerging East Asia was 76%. Considering that 65% of India's population is within this age range, the country's labour force deficit represents 142 million jobs. Most of these jobs must be created in industry (construction and manufacturing). The actions required to increase the participation rate include a drastic improvement in infrastructures (mainly energy generation and transport) in order to encourage growth in the manufacturing sector, which is a real weak point in the economy. The administrative burdens that stifle companies would also need to be reduced, eliminating some distorting taxes and improving how the real estate market works. These improvements should help to combat one of India's most important weaknesses: the insufficient size of its firms, with the consequent reduction in productivity. In India, 84% of manufacturing firms employed fewer than 50 people in 2009 whereas this share was 25% in China.

Another essential objective of the employment pillar is to reduce gender differences. India's low participation rate can be entirely explained by the limited participation of women in the labour market. 83% of the male population aged between 15 and 64 were working or looking for work in 2012, a figure very similar to the 84% of emerging East Asia. However, this percentage falls to 30% for the female population while, in emerging East Asia, it was 68%. This gap between men and women (53 p.p.) is one of the biggest in the world. It is advisable not to take too long to apply corrective measures as, according to the International Labour Organisation, the situation is getting worse: the female participation rate is falling. Although it is true that more women are going to university and there are always errors in measuring such statistics, this would merely explain one part of the decline. Other possible causes relate to cultural factors: many women leave employment once the family's income rises above subsistence, or they are «attached» to sectors with little growth, such as agriculture, or which have been harder hit by the economic crisis.

In this respect, the second pillar becomes more important: raising farm productivity. India's deficiencies in the secondary sector mean that a large portion of the population still works in agriculture (according to the World Bank, agriculture absorbed 47% of India's employees compared with China's 34%). This gap is exacerbated by the low productivity of India's agricultural sector compared with other emerging economies. Reforms should include the elimination of restrictions on agricultural prices (revising 2003's Law on Market Committees and rationalising administrative price controls which notably distort the market). It is also desirable to establish insurance schemes for poor harvests (involving the private sector), reform the land market, improve farmers' access to credit, encourage the use of technology and reduce the number of public bodies involved in agricultural policy.

The third pillar consists of increasing public spending on basic services, which in 2012 was equivalent to 11% of GDP. According to McKinsey, a 6.7% increase per year over 10 years (reasonable considering India's growth) should be enough to put most of the population above the empowerment line. However, given the governmental inefficiency, the success of this action cannot be assured without the contribution of the fourth pillar. In other words, it will be difficult to increase spending if there are no changes, either before or at the same time, to how the public administration works. This reform must achieve greater transparency, decentralise powers to the Gram panchayats (local governments), redesign civil servant incentives, combat corruption and create an independent agency focusing on the big priorities.

It is a huge challenge but Modi's clear victory releases him from the need to make concessions and the reward is certainly worth the effort: 1.2 billion Indians are waiting. 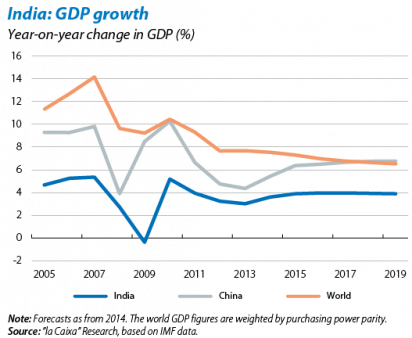 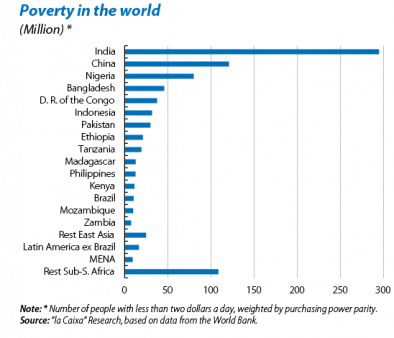 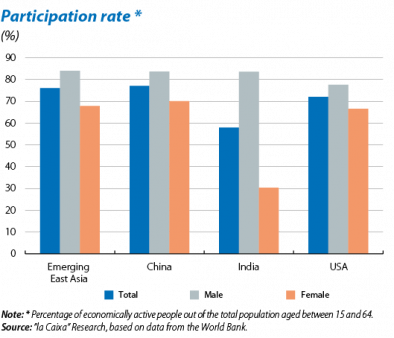