The political phenomenon of populism is currently on the rise and will become even more apparent over the next few months. This is due to the political risks that would be associated, should they come to power, with the proposals made by populist parties in the run-up to imminent elections in the Netherlands and France. Populism is a blurry concept, however, and debate is ongoing regarding its boundaries. In Europe it has often been associated with political views at both ends of the ideological spectrum, to such an extent that the prestigious British think tank, Chatham House has coined the term «Populist Extremism». This suggests we could shed more light on the current populism boom if we had a better grasp of the behaviour and factors related to extreme political views.

With this aim in mind, we have used the European Social Survey (ESS), one of the most comprehensive surveys, to analyse the political inclinations of European citizens. This survey is useful to evaluate the attraction of extreme political platforms as it asks each respondent where they would place themselves on a left-right line from 0 to 10. The ESS has been conducted in Europe every two years since 2004 and, in its latest wave in 2014, it interviewed 40,185 citizens from 21 European countries.

Firstly it is important to note that, according to ESS data, 23.8% of the European population identified with extreme political positions in 2014, corresponding to positions between 0 and 2 for the left-wing and between 8 and 10 for the right-wing. Of this percentage, 13.0% were on the right and 10.8% on the left. Surprisingly this percentage has remained relatively stable over time as it was 21.9% in 2004. There was, however, a slight but revealing spike after the financial crisis in 2008, when identification with these political views went from 21.1% in 2006 to 23.5% in 2008, the first wave carried out after the crisis.

So, if the preference for extreme political options has remained relatively stable, why have populist parties flourished recently? Two factors could potentially provide us with some insight into this apparent paradox. Firstly, a lot of populist parties mushroomed as a result of the financial crisis. Traditional parties had lost credibility and populists decided to enter the political arena and take advantage of the frustration in society. Secondly, the adverse effects of the economic crisis and loss of confidence in the main institutions might have encouraged those citizens who tend to support populist views to vote, while deterring more moderate voters from continuing to support the traditional parties.1

One key issue in the current populism debate concerns to what extent economic factors, including inequality, have helped the populist cause. To analyse this, we have once again used the ESS to discover the characteristics of respondents who support extreme political options. We divided the answers given by respondents to the different ESS questions into four groups. The first group is made up of economic factors, including household income and concern about inequality and unemployment. The second group contains socio-cultural and demographic factors, such as the importance placed by respondents on traditional values, their attitude towards immigrants, age and education. The other two groups are indicators of the respondents’ trust in institutions and level of happiness, respectively. When we calculate the contribution of each group to explain the preference for extreme political options,2 we can see that economic factors account for 20%, a significant percentage but not overwhelming and clearly lower than the relative weight of socio-cultural and demographic factors with 51%, and the institutional trust indicators, with 24%. In other words, the famous phrase «It’s the economy, stupid!» is still valid but not as much as it used to be. 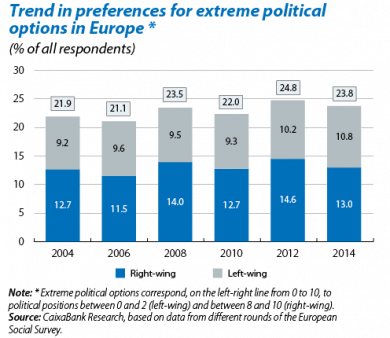 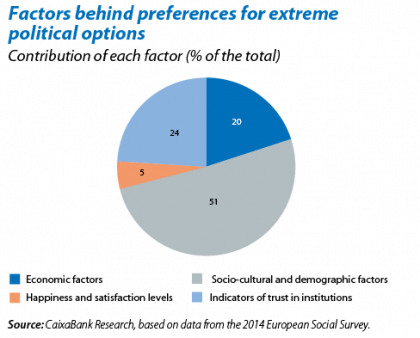