2014: consolidation of the economic revival

The Spanish economy took its leave of 2013 with data that encourage optimism. High frequency indicators for 2013 Q4 have confirmed the growth starting the previous quarter and, in fact, point to some acceleration in the rate of growth for economic activity in the final part of the year. Our forecast is along these lines: we expect GDP to grow by 0.2% quarter-on-quarter in 2013 Q4, 0.1 percentage points above the figure for the previous quarter. This forecast might even be bettered thanks to the dynamism shown by domestic demand over the last few months. Part of this upswing is the result of temporary factors such as the improved prospects for the short and medium term, so we have kept our growth forecast for 2014 as a whole at 0.8% year-on-year, rate that has not been reached since 2008. This is therefore an encouraging scenario. 2014 promises to be a crucial year to underpin the pillars required to support Spain's future economic growth.

Confidence increases in the improvement of the Spanish economy. The recent double-dip recession means that caution is required when evaluating the factors that lie behind the recovery. However, the risk of another relapse seems limited. Unlike in 2011, the reforms adopted over the last few years are helping to restore confidence in growth that is sustainable over the long term. A perception that has become stronger as significant progress has been seen in correcting the macroeconomic imbalances present at the start of the crisis. This is reflected in the improvement, in the second half of 2013, of the forecasts by the consensus of analysts with regard to growth in 2014 (from an annual figure of 0.2% in August to 0.6% in December). However, efforts must continue on the reform front. The agenda of reforms agreed with the European Commission last year involve the adoption of further measures in 2014 Q1 and, moreover, the list of tasks still pending may get longer in the exhaustive report to be presented by the European Commission in April.

Rebalancing the supports for growth: domestic demand continues to gain ground. In 2014 the growth in activity will be supported by a gradual improvement in domestic demand as well as by the foreign sector. On the one hand, private consumption continues to improve. Retail sales maintained their upward trend in November and returned to positive terrain with a growth rate of 2.8% year-on-year. The improvement in expectations regarding the labour scene reinforces this trend. On the other hand, supply indicators show a revival in industrial activity which consists of further advances in investment. In this respect, of note is the improvement observed in production capacity utilization since 2013 Q2. At the end of year, this had already reached 75.4% of the total capacity, coming close to its historical average (slightly above 80%). The contribution of domestic demand to GDP growth therefore seems guaranteed.

A change in trend in the labour market is increasingly imminent, which will help to boost private consumption.  Consumer expectations regarding the unemployment trend over the coming months have improved significantly, which might have resulted in decisions to consume that had been postponed until now. According to our forecasts, net employment will be created again in 2014, with a 0.3% annual increase in the number of employees, something that hasn't been seen since 2007. The data available for 2013 Q4 are in line with this scenario. Although November is usually a month with net job losses, in 2013 the number of people registered as employed with Social Security posted its smallest decrease for the last three years (down by 66,800 people compared with October), indicating that the labour market is stabilising somewhat. However, this further improvement must be examined carefully as it is partly due to the rise in the number of registered workers in non-market sectors (those that make up the public sector). With a view to 2014, the government has passed new labour measures aimed at improving the flexibility of the labour market (see the Focus «Job creation in Spain is near at hand»).

The upswing in domestic demand allays risks of deflation. Inflation returned to positive terrain in November (going from –0.1% in October to +0.2%), putting an end to the downward slide starting in July. This change in trend is largely due to
an improvement in domestic demand and the diminishing downward pressure exerted by energy prices, two factors that are very likely to continue over the coming months. That is why we expect inflation to remain in positive terrain in December 2013 and rise further in 2014, placing inflation at 1.0% in December (0.8% on average for the year).

The export sector will continue to drive the economy in 2014. In the last five years, Spain's economy has completed one of the biggest adjustments in external imbalances of all the euro area countries, going from a current account deficit of 10.6% in 2008 Q2 to a surplus of 0.7% in 2013 Q3. This correction has been possible thanks both to the good performance by exports and the weakness in imports. As domestic demand gains ground, the rate of improvement in the trade surplus is expected to wane but this process does not appear to have come to an end as yet. In October imports grew again for the second consecutive month (+1.1% year-on-year) while exports saw their rate of growth fall significantly (1.8% year-on-year compared with 4.4% in Q3), hindered by weak sales outside the euro area (especially towards the United States, Russia and China, with year-on-year falls of 16.8%, 10.0% and 8.2%, respectively).   However, we believe this slump in non-EU trade is temporary and expect exports' rate of growth to rally over the coming months. The improvement in industrial orders from outside the euro area in the month of October (namely 5.5% year-on-year) supports this scenario.

Private sector deleveraging continues to reduce bank credit and limits the capacity for domestic demand to grow. In October, the credit squeeze held steady at 13.0% year-on-year while the NPL ratio rose once more, up to 13.0% (0.3 percentage points more than in September). A breakdown of the data for 2013 Q3 shows that, although this drop is widespread in all sectors, it affects property development and construction to a greater extent (partly due to the accounting effect produced by transferring assets to the Sareb). In spite of this trend, the gradual recovery in the economy should help to bring about, albeit little by little, a shift in the trend for credit, with its rate of contraction diminishing as 2014 progresses. This change will also be helped by the improvement in funding experienced by Spain's banking system, to some extent the result of the adjustments carried out over the last few years and which has allowed the troika to bring its bank bail-out programme to an end.

Initial signs of stabilisation in the real estate market. Whereas house sales were the first to show signs of having bottomed out, it is now the turn of prices, starting to show signs of having corrected a large part of the imbalance generated before the outbreak of the recession, with an adjustment that comes to around 30% in nominal terms (larger or smaller depending on the source used). Indicators published in the last few months confirm that prices will soon stabilise: according to the INE, house transaction prices rose by 0.7% quarter-on-quarter in 2013 Q3. The valuation price series (from the Ministry of Public Works) is lagging a little behind, still falling by 0.5% quarter-on-quarter in the same period. Although we cannot completely rule out any increase in the coming quarters, the weakness of demand factors (both demographic and economic) mean that house prices are likely to continue falling in 2014.

The slight deviation from the public deficit target that may occur in 2013 does not mean that 2014's target will not be reached. The consolidated figures for the fiscal balance in Q3 show no adjustment in the deficit in the first nine months of the year (the cumulative deficit for this period was 4.6% of GDP, 0.3 percentage points more than in the same period of 2012). This deterioration can particularly be explained by the increase in the central government balance sheet. The data available for Q4 warn of a possible deviation from the deficit target for 2013 (set at 6.5% of GDP), particularly by the central government balance sheet which, in November, posted a deficit of 4.0% of GDP, 0.2 percentage points above the target set for the year as a whole. Nonetheless, this deviation does not mean that 2014's target will not be reached, namely 5.8% of GDP. This scenario is partly supported by the drop in the risk premium over the last few months, falling below 230 basis points in December. This trend has reduced the average financing cost of the public debt portfolio to 3.7%. 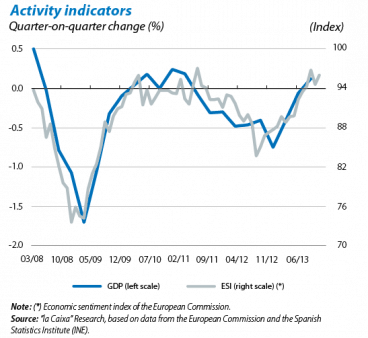 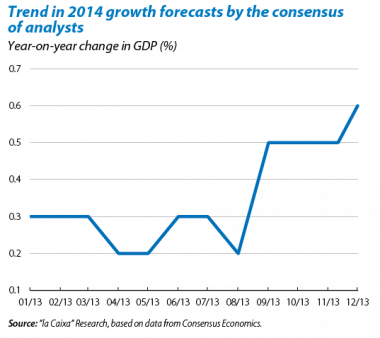 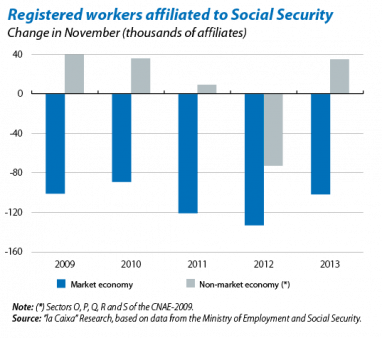 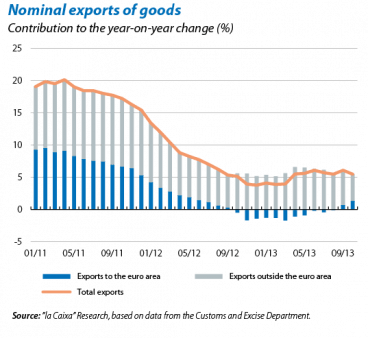 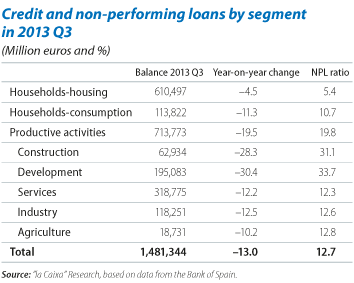