The international economy will build up steam in 2015. Specifically, we estimate growth of 3.9% in 2015, higher than the 3.2% seen in 2014 and within an overall context of inflation still being contained, at around 3.5%. The scenario for 2015 has begun with strong contrasts. Among the advanced economies, the good performance by the US, whose growth is still solid thanks to domestic consumption, investment and less fiscal adjustment, contrasts with the weakness of the Japanese economy, struggling to move away from its secular deflation. Among the large emerging countries, the gradual but controlled slowdown of the Chinese economy contrasts with the episode of the Russian crisis, introducing a high degree of volatility.

The US economy «continued to expand» according to the Fed's assessment in its Beige Book field study from December, replacing the more tepid classification of growth as «modest to moderate». The third estimate for GDP growth in Q3, once again revised upwards, confirms this expansionary scenario. This places year-on-year growth at 2.7% (at 2.3% and 2.4% in the first and second estimates, respectively), supported by strong consumption and non-residential investment. This slight improvement does not alter our growth forecasts for 2014 and 2015, however, which remain at 2.3% and 3.1%, respectively.

Q4 business indicators continue to show robust expansion. The business sentiment index (ISM) for manufacturing stood at 58.7 points in November while the index for services rose to 59.3, both in the zone indicating robust expansion. Along the same lines the business sentiment index for small enterprises rose to 98.1 points in November (96.1 in October), supported by an improvement in future expectations. Undoubtedly such trends endorse the good performance we expect from corporate investment in 2015. Retail sales also stand out, growing by 5.1% year-on-year in November, above the consensus forecasts and October's figure (4.5%), as well as the industrial production index, advancing strongly by 15.2% year-on-year, the largest year-on-year rise since January 2011.

The labour market continues to improve within a context of growing economic activity. In November 321,000 jobs were created, substantially surpassing the figure of 200,000 which usually suggests a strong market. The unemployment rate remained flat at 5.8%, the lowest level for the last six years and close to the 5% unemployment rate observed at the end of 2007. The downside to this vigorous tone is the relatively lacklustre employment rate (the relationship between employment and the population aged over 16), standing at 59.2%, 4 pps below 2007's level, a significant proportion of which is due to the demotivating effect caused by the years of crisis.

The slump in fuel prices has an impact on inflation in the United States. Specifically, in November this was 0.4 percentage points below the figure for the previous month (1.3%) due to the further drop in energy prices, which was not offset by the rise in the rest of the components. Core CPI (without foods or energy) increased by 0.1% month-on-month, bringing its year-on-year growth to 1.7%. Although we have maintained our growth forecasts, the change made to the forecasts for oil has forced us to revise downwards our forecast for inflation in 2015 (from 1.5% to 1.0%). Such moderation is also supported by the Federal Reserve's accommodative message given at the last meeting of the Federal Open Market Committee (FOMC). According to the statement issued, the Fed will be «patient» in its handling of any rises in the official interest rate.

The Prime Minister Shinzo Abe receives the population's endorsement for his expansionary policies on winning the early elections held in December in an environment marked by the recession and stagnant inflation: GDP growth was revised downwards both for Q1 and Q3; the Bank of Japan's benchmark CPI stood at 0.7% year-on-year in November (excluding the effect of the VAT hike last April), far from the 2% target set by the monetary authority; and Moody's reduced the credit rating for its public debt which already represents 250% of GDP. This downward revision of GDP has forced us to reduce our growth forecast for 2014 to some extent (from 0.4% to 0.3%). With a view to 2015, the delay until April 2017 of the second VAT hike, the announced increase in public expenditure (equivalent to 0.7% of GDP) for low-income households and small enterprises and the recent intensification in the BOJ's quantitative easing have led us to keep our forecast at 1.2%.

The depreciation of the yen is affecting domestic demand. Since the BOJ upped its rate of asset purchases last 31 October, the yen has depreciated by 10% against the dollar, and the Nikkei stock index, dominated by large exporters, has risen by 14%. However, the benefits of a cheap yen for exports are limited at the yen's current levels, which are very low from a historical perspective. Nevertheless, the increase in prices of imported products is starting to have a negative effect on households and firms. The Tankan business sentiment index for large manufacturing firms fell slightly in Q4 (12 points) and is now significantly below the level of 17 points at which it started the year. Given this situation, cheaper oil will be a boost for Japan's economy which, due to the nuclear moratorium imposed after the Fukushima accident, has seen its oil imports rise significantly (from 2.3% of GDP in 2010 to 3.6% in July of 2014).

China continues its gradual, controlled slowdown. The PMI manufacturing index produced by the National Statistics Office fell to 50.3 points in November, its lowest level in eight months. Although this figure is still above the 50-point threshold (indicating expansion), it suggests that growth has slowed down considerably in the last few months. Judging by the rest of the indicators, this slowdown appears to be gradual. The PMI for services rose slightly to 53.9 points from its October figure of 53.8. Along the same lines, the country's retail sales figures came as a pleasant surprise, growing by 11.7% year-on-year compared with 11.5% in October. On the other hand a basic indicator such as the industrial production index grew by just 7.2% in November, lower than October's 7.7%. Nonetheless, a significant part of this slowdown is due to the forced stoppage of numerous factories in the north of the country during November's APEC summit (Asia-Pacific Economic Cooperation). Within this environment of a controlled slowdown, inflation is still tending to fall (1.4% in November), allowing the government to use further expansionary measures if required and we should remember that the Central Bank already surprised us in mid-November with a substantial cut in the official interest rate.

Russia will fall into recession in 2015 due to the combination of falling oil prices, international sanctions and geopolitical uncertainty related to Ukraine. Given this situation, its crisis of confidence has become a full-blown foreign exchange crisis. During the acute phase of this crisis in December the government admitted that Russia will enter a recession in 2015 and several events quickly followed: financial pressure intensified, the rouble fell against the euro, the interest rate on 10-year debt went from 10.6% to 16.2% and the central bank attempted to slow down the rouble's depreciation via reference rate hikes: from 9.5% to 17%.

Although Russia has some room for manoeuvre, there are downside risks. In particular the level of reserves is high, equivalent to 64.5% of the country's external debt and to 351% of its short-term external debt. This, together with low public debt (13.9% of GDP in 2013), provides some margin to avoid a potential default. Similarly the rouble's depreciation should cushion fiscal pressure and boost the current surplus, albeit at the risk of increasing costs, which may hinder growth. Given this uncertain context we have revised downwards our growth forecast for 2015 as a whole, from 0.8% to –2.5%. However, even with this revision the risks are still clearly downside with a recession that might become more intense should oil prices fall further and the loss of liquidity continue. 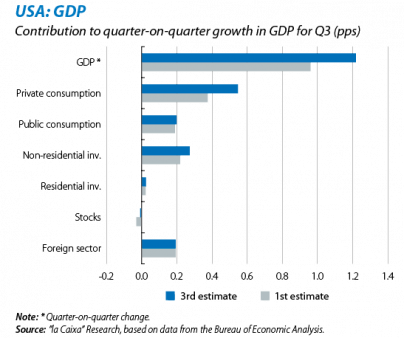 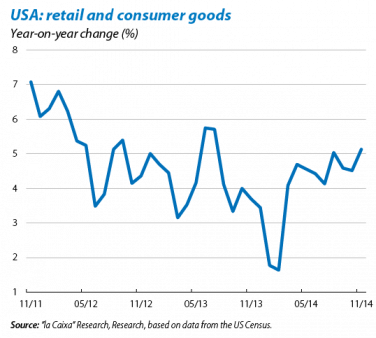 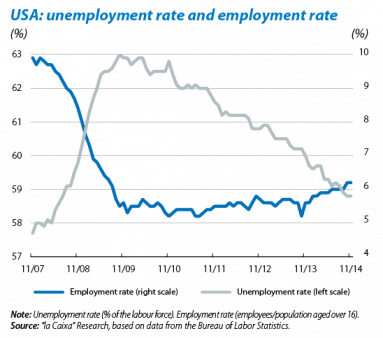 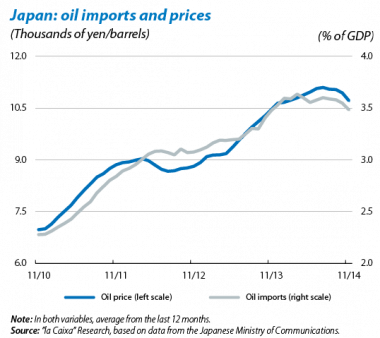