2016: global acceleration but with important risks

World growth will speed up in 2016 (3.6% compared with 3.1% in 2015) with the advanced economies consolidating a moderate expansion (2.2%) and growth building up steam in the emerging economies in spite of uncertainty (4.5%). This scenario might be affected by global and local factors. Among the first, at present is the interest rate hike by the Federal Reserve (Fed). This is the first increase in almost a decade and could have important global consequences, especially for emerging economies whose financial flows increased significantly as a consequence of the liquidity injected by the Fed (see the Focus «The Fed hikes - outflows of capital from emerging economies?» in this Monthly Report). A second factor of global scope is the price of oil, surprising once again by falling in December. We predict, however, that crude will start to appreciate gradually over the first few months of 2016, helping to rebalance the winners and losers and returning inflation to more normal levels. A third notable factor in the last month has been the greater deterioration in Brazil's economy, the largest in Latin America and one of the biggest emerging economies.

The Fed raises the official interest rate by 25 bps to the range of 0.25%-0.50%. In December the Fed confirmed all expectations by starting to raise interest rates after almost 10 years without any increase. Nonetheless, in its communication the institution stressed the gradual nature of this process: «The Committee expects that economic conditions will evolve in a manner that will warrant only gradual increases in the federal funds rate». So, now that the interest rate hikes have begun, the important feature is their pace. In this respect we expect four hikes to be carried out by the beginning of 2017 and interest rates are likely to be at 1.25%, a level higher than that predicted by fed fund rate futures but lower than the opinions expressed by members of the Federal Open Market Committee.

US inflation is on the up. The general CPI grew by 0.5% year-on-year in November, 0.3 pps more than the figure posted the previous month and in line with our forecasts. However the general CPI remained flat in month-on-month terms due to a further fall in the energy component (–1.3% month-on-month). The recent trend in oil prices represents a downside risk for our main scenario which places general inflation at 2.0% by the end of 2016, although core inflation continued to look strong and was 0.1 pps higher than October's figure (2.0%).

The latest indicators point to this rate of expansion continuing in the US. GDP grew by 0.5% quarter-on-quarter in Q3 according to the third estimate of the Bureau of Economic Analysis, almost unchanged from its second estimate. Private consumption, which increased by 1.0%, was confirmed as its strongest component. On the other hand, the ISM business sentiment index for manufacturing fell to 48.6 points in November, corresponding with economic growth of almost 1.4%. However, the ISM for services (which account for 80% of economic activity and 85% of the jobs in the private sector) stood at 55.9 points, in line with growth of 3.0%. Given this situation we have kept our growth forecasts at 2.5% year-on-year, both for 2015 and for 2016.

The US labour market still looks in good shape. 211,000 net jobs were created in November, maintaining the average of 215,000 over the last 12 months. Wages also rose by a favourable 2.3% year-on-year, significant growth if we remember that inflation is still contained. The unemployment rate stayed at a low 5.0%, very close to 2007's average of 4.6% and far from the peak of 10.0% recorded in October 2009. One questionable aspect of this favourable situation is that a considerable proportion of this 5 pps drop in unemployment is due to a lower participation rate, standing at 62.5% of the labour force in November, significantly below the 66.0% recorded in 2007.

Japan grows in Q3 and sidesteps recession. After the upward revision made by the country's Department of Trade, GDP for 2015 Q3 grew by 0.3% quarter-on-quarter (the previous figure announced had been a drop of 0.2%), meaning that Japan has avoided falling into recession after the quarter-on-quarter decline in Q2. However, an analysis by component suggests caution: three-quarters of this improvement was due to a much smaller inventory adjustment than previously announced, which will hinder the Japanese economy over the coming months. For its part private consumption has yet to take off. Nonetheless, the substantial improvement in the figures for Q3 has forced us to carry out a technical upward revision of our annual forecast for 2015 (from 0.6% to 0.7%).

Economic sentiment indicators show limited improvement. The Tankan business sentiment index for large firms produced by the BoJ stabilised in 2015 Q4 in spite of a deterioration in expectations for 2016 Q1. The high level shown by the index for large firms also contrasts with a more contained figure overall (which includes small and medium-sized firms). On the other hand the foreign sector once again suffered from weak Chinese and US demand for Japanese goods in spite of a relatively cheap yen.

Strong economic and political decline in Brazil. The recession is getting worse in Brazil. In Q3 GDP fell by a huge 1.7% quarter-on-quarter (–2.1% in Q2), equivalent to a fall of 4.5% in year-on-year terms (–3.0% in Q2). By demand component, of note is the bad performance by investment and, to a lesser degree, public consumption. Rising inflation, in October reaching 9.9%, and the large current deficit (3.9% in Q3) complete a poor economic situation. Political uncertainty also worsened with the start of impeachment against the President Dilma Rousseff. This process, which could last several months, is complex (a committee in the Congress, plenary in the Congress and plenary in the Senate). In principle it will be difficult to achieve the majority required for impeachment (two thirds of the seats) but, given the country's current political volatility, extreme scenarios cannot be ruled out. One initial consequence of this political deterioration was the replacement of the Finance Minister, Joaquim Levy, with Nelson Barbosa, less committed to fiscal consolidation. Subsequently the Fitch agency downgraded Brazil's credit rating from BBB– to BB+. The country's poor economic figures and political uncertainty have led us to revise downwards our own forecast, altering the drop in GDP from –2.3% to –3.5% in 2015 and from –0.6% to –2.5% in 2016.

China's activity figures suggest growth is stabilising slightly. This supports our main scenario of a soft landing with a growth forecast of 6.8% for 2015 and 6.5% for 2016. Specifically, retail sales advanced in November by 11.2% year-on-year, the best figure for the year to date, while industrial production rose by 6.2% year-on-year, the best month since June. The foreign sector, on the other hand, disappointed once again: exports fell by 6.8% year-on-year in November.

Turkey posts surprisingly good figures. In Q3 GDP increased by 4.0% year-on-year, a little more than expected and a slight acceleration compared with Q2 (3.8%). The main factors behind this figure are strong growth in public consumption and the lower negative contribution made by the foreign sector (mainly resulting from a drop in imports). Nonetheless the economic outlook is somewhat less positive than the data suggest as significant macroeconomic imbalances remain (inflation was 8.1% in November and the current deficit reached 5.2% of GDP in Q3) as well as geopolitical uncertainty.

Oil falls to its lowest price in the last seven years. Lack of agreement regarding production at the twice-yearly OPEC meeting and the increase in US stocks led to a sharp fall in the price of crude. Specifically Brent accumulated a 17% drop in the first two weeks of December, pushing it down to the minimums reached in December 2008, below 40 dollars/barrel. However, we expect the reduction in US shale investment and the predictable recovery in global demand to help crude prices to gradually recover throughout 2016, reaching 64 dollars/barrel by the end of year, while in mid-December the US Congress reached an agreement to raise restrictions on crude exports for US companies. 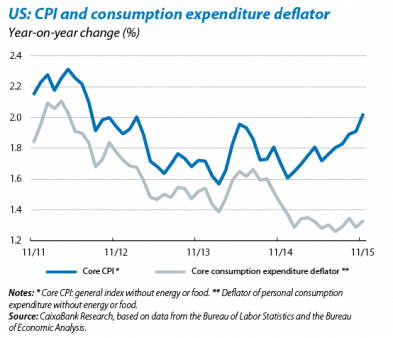 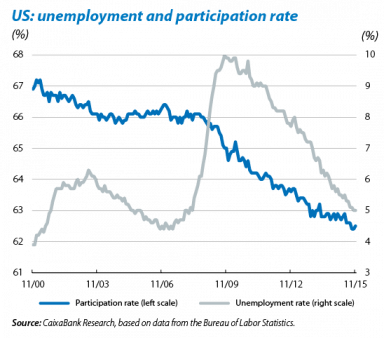 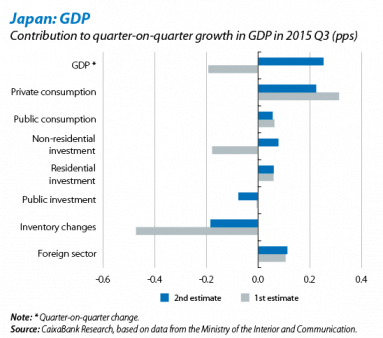 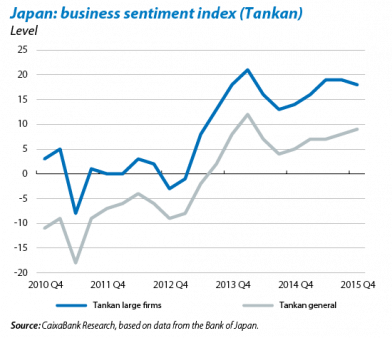 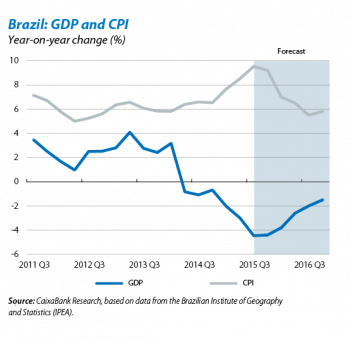 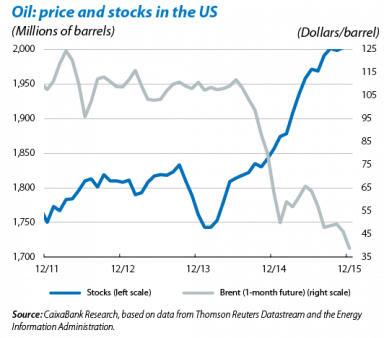