Without changes in our main scenario of global acceleration: we forecast world growth of 3.5% in 2016 compared with 3.1% in 2015. These favourable forecasts are based on smaller macroeconomic imbalances than in previous years, a still highly accommodative monetary environment and cheaper oil on average. It should be noted that, from a global perspective, the weakness in oil prices is positive for growth as it results in considerable energy savings for importing regions (particularly the euro area, Japan and China).

However, the likelihood of a downward risk scenario has increased due to renewed doubts regarding a hard landing for China and the further drop in oil prices in January (a key sector in numerous exporting emerging countries). These two elements of risk, together with the potential greater impactof the Fed's monetary normalisation and the worsening of the domestic situation in some emerging economies such as Brazil, could mar our main scenario. Given this situation it comes as no surprise that the IMF has revised slightly downwards its growth forecasts for 2016 and 2017. Specifically it predicts a somewhat more gradual acceleration in its January-revised figure than in its October report (3.4% in 2016 and 3.6% in 2017). Our stance has been to maintain the main scenario of acceleration but increase the likelihood of the risk scenario, in which world growth would not accelerate but remain at levels similar to 2015. Nevertheless an advance that, although more contained, would be substantially higher than the rates for 2009, the worst year in the last decade in terms of growth.

In China, the start of 2016 has been affected by turbulent financial markets, repeating the episode of August 2015.The trigger was once again fear of the Asian giant not being able to avoid a hard landing. December's poor figure fromthe PMI manufacturing index produced by Caixin/Markit and the end of limitations on certain entities regarding their sales on the stock market helped to push down share prices. This was worsened by the start-up of a firewall that automatically closes the stock markets when losses exceed 7%. Given this situation, the central bank reacted by allowing the yuan to depreciate (close to 3% against the US dollar) and injecting liquidity, although the Shanghai stock market still lost more than 15% during the first few weeks of January. Nonetheless we believe that, as the macroeconomic figures confirmed a controlled slowdown of the Chinese economy, such turbulences should diminish.

China's GDP remains firm but downside risks continue. The GDP growth figures came as a pleasant surprise. The Chinese economy grew by 6.8% in 2015 Q4, placing growth for the whole of 2015 at 6.9%, only 0.1 pps below the government's forecast and slightly above ours. However, the initial welcome given to this macroeconomic figure did not prevent further losses in the country's stock markets. China is immersed in a two fold rebalancing of its economy. Firstly, investment must give up its central role to consumption, something the Q4 figures are indicating. The second rebalancing is the gradual replacement of industry by services, as also shown in the Q4 figures with value-added for industry growing by 6.0% year-on-year, its slowest rate since 1992, compared with the value-added for services which grew by 8.2%. For its part, inflation stood at 1.6% in December, giving the country leeway to implement further accommodative monetary policies.

Inflation surprises by rising in a recessionary Brazil. In addition to the deterioration in Brazil's economic situation (the fall of GDP in 2015 is estimated at 3.5%) and its political uncertainty, there is also the worsening of macroeconomic imbalances, in particular inflation which has once again surprised economists by rising (in December it reached 10.7%). This situation is not expected to improve much in2016 as the end of the base effect of liberalising administrative prices in 2015 (which would push down inflation) has been offset by high inflation due to the weakness of the real. In this respect we have revised our inflation forecast for 2016 from 6.4% to 6.6%. We have keep our GDP forecast the same (–3.5% in 2015 and –2.5% in 2016), albeit with a downward bias.

Russia's GDP falls by 4.1% year-on-year in Q4. The figures suggest that the most serious point in the recession may be over. Nonetheless, the recent trend of the price of crude, more negative than expected a few months ago, will result in a slower recovery than expected. This factor, together with the announcement of a considerable adjustment in public expenditure, justifies a downward revision in our main scenario for the country in 2016: from –0.2% to –0.8%(2015: –3.7%).

Oil prices surprise again by falling further. The price of crude oil fell to below 30 dollars per Brent barrel in January. The reasons for this recent drop lie in the milder winter which helped to boost global stocks and, in turn, swelled the excess supply of crude. In the medium term, if Iran manages to comply with the terms of the nuclear agreement more quickly than expected, the supply of Iranian crude oil will be more likely to increase on the international market in 2016 and 2017. For all these reasons we have revised downwards our forecast for the Brent price from 58.2 to 42.6 dollars/barrel on average in 2016 and from 68.8 to 65.6 dollars/barrel in 2017.

US GDP grew by 2.4% in 2015, equalling the growth rate of 2014. GDP growth once again slowed down in 2015 Q4, up by 0.2% quarter-on-quarter (1.8% year-on-year), lower than the 0.5% for Q3 (2.1% year-on-year) and also slightly below the forecast in our main scenario. By demand component, the slowdown was due to slower growth in private consumption, in line with expectations, and a drop in non-residential investment which, in this case, came as an unpleasant surprise. Also of note was the decline in exports which were probably affected by the strong dollar. After this figure was published, we revised slightly downwards our forecasts for 2016, with growth of 2.3% (compared with 2.5% previously) and maintained the forecast of 2.4% for 2017.

2016 looks like being a year of significant growth. The latest activity indicators, such as the Beige Book, also showed the evident weakness of the GDP figure for Q4. However, this should not continue into 2016 thanks to the effect of the sustained recovery in the labour market (in December, 292,000 new net jobs were recorded, and a wage rise of 2.5% year-on-year), which will boost private consumption and the housing market. Similarly public expenditure, as 2016 is an electoral year, will partly offset the lower investment in energy firms (related to the extraction of shale oil).

The Fed maintains interest rates in January after the increase in December. In its statement on 27 January, the Fed suggested, without being explicit, that the risks for growth were downwards and confirmed the slowdown at the end of 2015, affected by a decline in investment in capital goods and construction. These risks for growth, to which we should add the turbulence in international financial markets and the recent reduction in inflationary tensions, lead us to believe that the monetary institution will wait until its June meeting to announce its second interest rate hike (previously we thought it would happen in March). The general CPI grew by 0.7% in December 2015, 0.2 pps above the previous month's figure but slightly below our forecasts. The core CPI grew by 2.1% year-on-year, 0.1 pp above November's figure. In month-on-month terms (with the series seasonally adjusted), of note was the further fall in the energy component (–2.4% month-on-month) which supported the decline in the general CPI (–0.1% month-on-month). Also notable was the slowdown in month-on-month terms of the core CPI. December's figures and the downward revision in the price of oil also led to a downward revision in our inflation forecasts for (1.4% on average, previously 1.7%).

Japan enjoys modest growth. Private consumption is suffering from households' loss of purchasing power and the cheap yen is reducing the purchasing power of SMEs and consumers, and is not benefitting exports as before. In spite of depreciating by 31% since the end of 2012 (when Shinzo Abe came to power), Japanese exports to China and the US have fallen by volume. The Bank of Japan (BoJ) might intensify its monetary expansion in 2016 due to the meagre nominal growth, essential to reduce the high debt/GDP ratio and permanently low inflation (the CPI without food but with energy, the BoJ benchmark, rose by just 0.1% in December). Nonetheless we have maintained our GDP forecasts for 2016 (1.0% compared with 0.7% forecast in 2015). 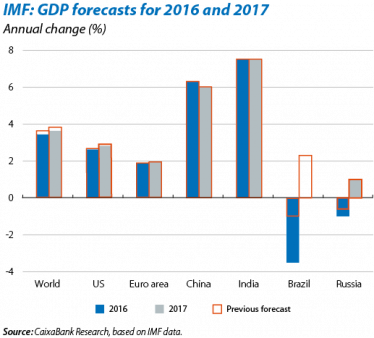