2019, a perspective from the future

Dear students and teachers of the Faculty of Economics, it is a great pleasure to have the honour of addressing this class of 2029. I have been told that, as is tradition at this event, I must choose a year which I consider contains lessons of interest for understanding the evolution of the global economy. Of course, there is no shortage of candidates. I could have chosen 1997, when the Asian crisis had a punishing effect on the emerging economies. Or 2001, when China joined the World Trade Organization and accelerated the pace of globalisation. Or, of course, 2008, which marked the beginning of the worst financial crisis since the Great Depression. And yet, my choice is 2019. Surprising, isn’t it? Because in our eyes it is a year of little consequence. Yet this is only because we have the benefit of hindsight, which puts everything in its place. Furthermore, as I shall try to justify, 2019 contained lessons that we could only read later on. Join me, then, on a journey into the past.

Let us remind ourselves of what the mood was like at the end of 2018. The forecasts we were projecting at that time were reasonably positive, since we expected a global growth of 3.6% in 2019 and of 3.5% in 2020, falling slightly short of the 3.7% registered in 2017 and 2018. The US was expected to grow by 2.3% and 2.1% in 2019 and 2020, respectively (2.8% in 2018); the euro area, by 1.8% and 1.7% (1.9% in 2018); and the major emerging markets together, by 4.6% in both years (4.7% in 2018). In general terms, the economic outlook indicated that 2019 would confirm the economy’s entry into a more moderate phase, but also the consolidation of an environment with lower volatility in growth. With all the necessary nuances, it appeared that, after the impact of the Great Recession, the economy would follow the path of the so-called Great Moderation. In other words, we would see a reduction in the volatility of the macroeconomic cycle that began in the 1980s.

This being the overall picture, what was our view of the position in the cycle at the end of 2018? The debate that concerned us at the time was whether the US was entering the late cycle, and what stage of maturity the euro area and the emerging markets had reached. In the case of the US, the data confirmed that an extended period of expansion was materialising (the longest since 1991), albeit with slightly less intensity than seen on average in previous expansions. This was indicated by the fact that GDP growth, both since the start of the expansion and since GDP exceeded the trend, had been lower than the average seen in the three expansionary periods that have taken place since 1993. However, this situation did not in itself allow the future path of the business cycle to be predicted. To do this, it was necessary to consider the information relating to duration and amplitude together with some other indicator. Indeed, when this information was combined with the pattern in consumption in the US in late 2018, a more complete picture was painted: the expansion in consumption was more dynamic than that observed historically in late cycle periods. Therefore, it was reasonable to assume that there was still some room for future growth. In summary, and recalling the terminology used in 2018, it was clear that the peak cycle of the US was beginning to be left behind, but that the late cycle had not yet been reached.

The cyclical position of the euro area was more difficult to read. It was known that the expansion had taken longer to get started than it had in the US, and that it had been less intense than previous expansions. In addition, in 2018, it had become apparent that the European economy was moving slower than expected and the forecasts pointed towards a slight moderation in the future. Nevertheless, both the duration and the intensity of the expansion suggested that the end of the cycle was still some distance away. Although, in 2018, assuring this to be the case was by no means easy, it was evident that based on the historical evidence, the trend in consumption and investment was stronger than in pre-recession phases. Finally, with regards to the aggregate picture of the major emerging economies, the pattern in terms of the expansion’s duration and intensity suggested that, broadly speaking, they were far from reaching the end of the cycle.

But what was of real concern in 2018 was that, while this central scenario was acceptably favourable, the balance of risks was clearly tilted to the downside. It may seem excessive today, with the benefit of hindsight when looking at the past from our standpoint in 2029, but at the beginning of 2019 there had been several years filled with many surprises. In addition, there was no shortage of candidates for these surprises to reoccur. As an example, it was not clear how the highest level of debt in history was going to be dealt with, and although it was assumed that China’s anomaly could be managed, as the country had instruments beyond the reach of any other emerging country, I remember how threatening their debt to GDP ratios were at the time.

China was not the only source of concern. Its accumulation of macrofinancial imbalances and the complicated exercise it was undertaking to change its economic model certainly warranted paying attention to the Asian giant. However, the US was not far behind it. While it had experienced high growth of 2.8%, most analysts knew that this rate was not sustainable, since it was the result of a combination of continued accommodative financial conditions, tax cuts and expansion in public expenditure. For this reason, there were many voices expressing concern that 2019 could end up being far worse than expected, as the fiscal stimulus faded and the financial conditions became less forgiving. In addition, the extent of the protectionist shift of the US could not be gauged at the time, and although a reasonable balance was expected to be reached between the three major powers of the US, China and the EU, the very uncertainty surrounding when and how this balance was going to be struck would end up taking a toll on the rate of economic activity.

Therefore, the downside risks to US growth were palpable. However, there was also no lack of reputable voices claiming that the real risk laid in the possibility of much higher than expected inflation, which would have required the Fed to react quicker than anticipated, leaving investors exposed to scenarios of greater monetary restriction than had been foreseen.

Furthermore, the domestic politics of many countries and the sources of geopolitical risks did not exactly serve to calm people’s nerves. The rise in populism loomed as a growing threat and a worrying trend. In various regions there were questions over whether the traditional leaders were going to remain in place: how could we forget the extremely complicated situation in the Middle East or Russia’s yearnings to once again become a major global player?

The cocktail of risks, therefore, was difficult to digest. The central scenario that we were working at the time with was only moderately worse than that of previous years, yet the alternative scenarios were proving to be openly negative and had a higher than usual probability of occurring. Few analysts admitted to being uneasy, but even fewer stated that they were entirely confident of what was to come. And I don’t have to remind you all of what end up happening.

Or perhaps I do, as I know that you pay less attention than you should in your economic history classes: fortunately, we got it right with the central scenario. Or at least we got the essentials rights. The world grew by somewhat less than expected, since the hotbeds of risk caused disruption to some extent, but there was no calamity. Common sense prevailed, the impact of protectionism was relatively low, and the commitments made were sustainable in the long term. Geopolitics and politics did not cease to be sources of uncertainty, but in the year of Brexit we could not have asked for much more. The normalisation of monetary policy fully materialised in the US, while in the euro area, the new present of the ECB rose the interest rate for the first time since 2011. The markets digested the new scenario with relative ease: 2018 had given sufficient warnings for investors to be prepared and the worst-case scenarios did not materialise.

In conclusion, as I mentioned at the beginning of my presentation, I chose 2019 because it spoke to us of the future, even if we were not fully aware of it at the time. In the years that followed, people began to understand that 2019 had marked the beginning of a new phase. This new phase would be characterised by the exceptional monetary policy being abandoned, somewhat more moderate but also less volatile growth, and by the ever-present reminder that, while we should not neglect economic issues, political matters would remain a key area for detecting and containing sources of uncertainty. 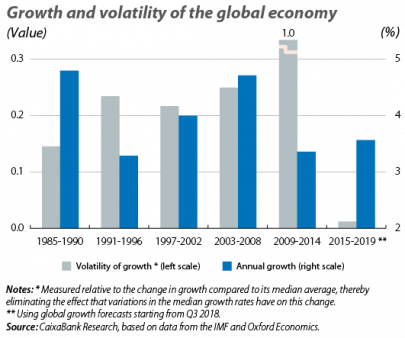 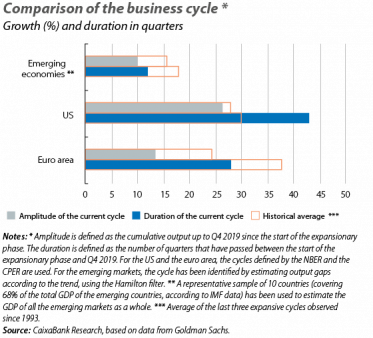