Activity is kick-started, but the decline in 2020 will be severe

The gradual lifting of the lockdown during the course of May brought about a progressive revival of economic activity. Credit and debit card spending shows that purchases increased in May to 5,900 million euros (200 million more than in March), while passenger car sales have also registered a recovery both in May (5,741 units sold, compared to 2,748 in April) and in June (5,474 units in the first 22 days of June, +73% versus the same period in May). By mid-June, electricity consumption was already growing by slightly more than 9% compared to the same period in May. In spite of this initial revival of the economy, the lockdown (which was necessary to control the pandemic) has generated an unprecedented shutdown in economic activity that will be reflected in a sharp fall in GDP for Q2 2020 as a whole. Furthermore, in addition to the immediate effects of the shutdown of activity between mid-March and April, the economy’s performance over the coming months will largely depend on how the pandemic itself develops, which is highly uncertain. Without an effective vaccine or treatment, the pandemic will continue to determine economic activity, while uncertainty will likely weigh on business’ and households’ decisions. For this reason, we have revised our GDP forecasts downwards and we expect Portugal’s economic activity to shrink by around 12% in 2020, followed by GDP growth of slightly above 8% in 2021. 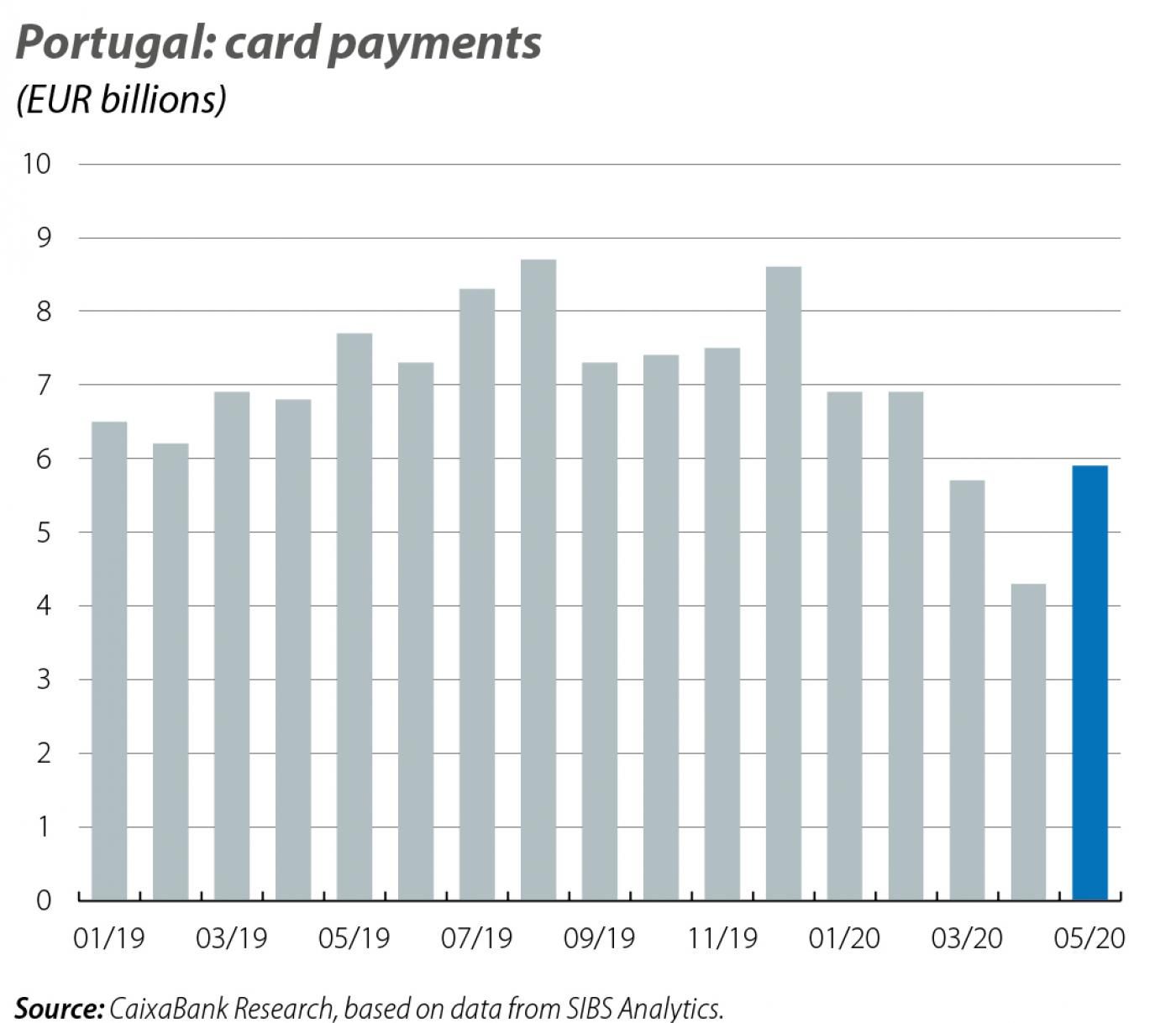 The labour market feels the intensity of the recession

In April, employment decreased by almost 2% year-on-year, while the inactive population increased by 4.4%, as a result of the impact of the lockdown on people’s ability to actively seek employment. In addition, the underemployment rate (a better measure of unemployment in the current situation, as it includes the unemployed, those in part-time employment who would like to work more and also inactive people who would like to or could work) rose to 13.3% (12.4% in March). The indicators available for May and June also show a marked increase in the number of people registered as unemployed in job centres (May: 34% year-on-year and +30% compared to pre-coronavirus levels; mid-June: 4% compared to the end of May, a slightly more moderate figure thanks to the reopening of sectors such as accommodation and catering). 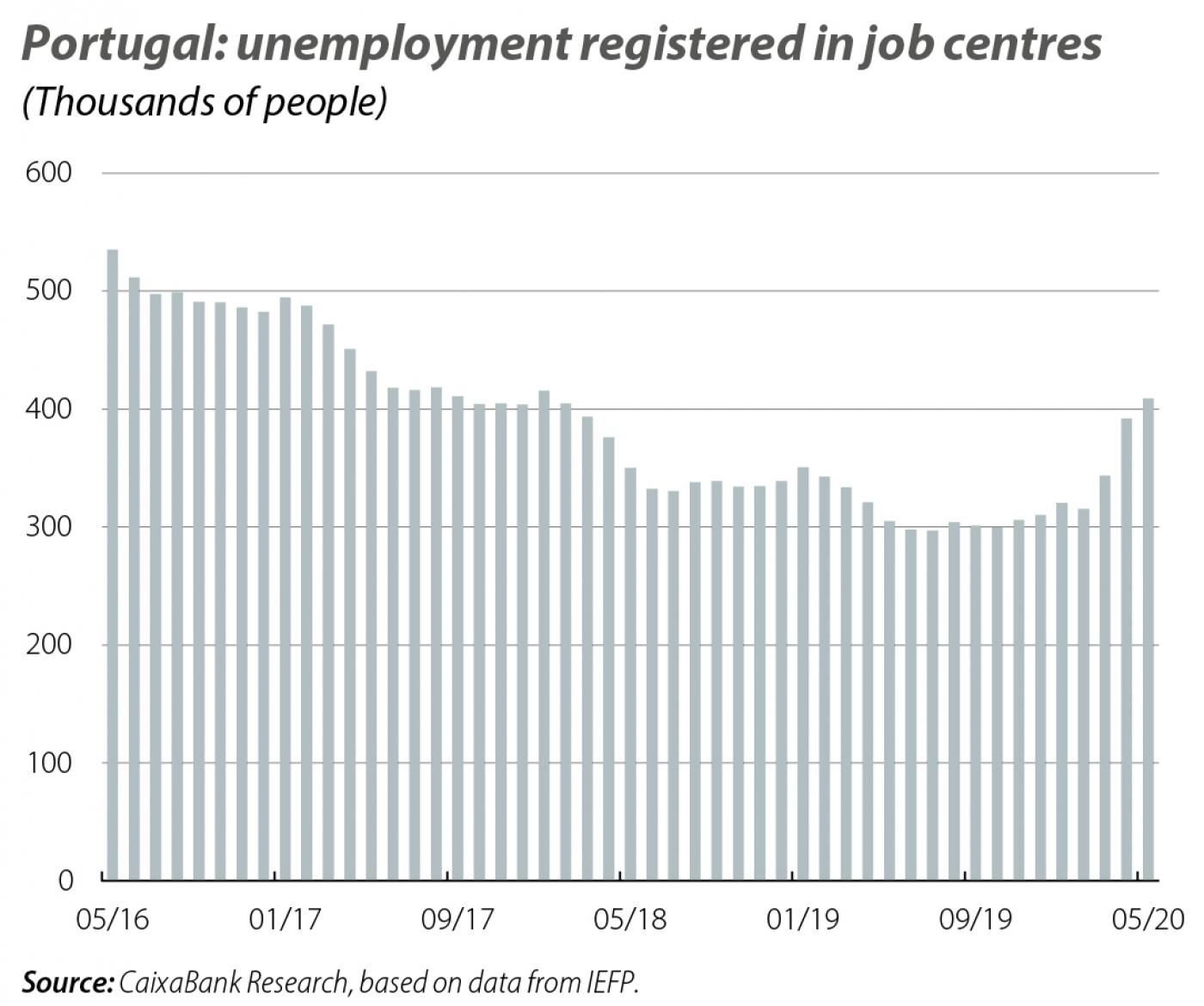 The general government budget balance deteriorated substantially in May

The general government budget balance deteriorated substantially in May (–4.1% of GDP for the year to date, compared to –0.7% for the same period in 2019), reflecting an increase in expenditure and a decrease in revenues. The costs associated with the fight against the pandemic contributed to this deterioration (+915.4 million euros, especially due to the costs related to temporary employment suspension programmes and the purchase of medical equipment and products). In addition, the deferral and suspension of tax payments contributed to a 868.7-million-euro reduction in revenue collection. These trends will continue to intensify over the coming months, both because the recovery in economic activity is expected to be gradual and because the government’s fiscal policy will continue to support the economy. As such, the government expects the deficit to reach 6.3% of GDP in 2020 (compared to the surplus of 0.2% registered in 2019). 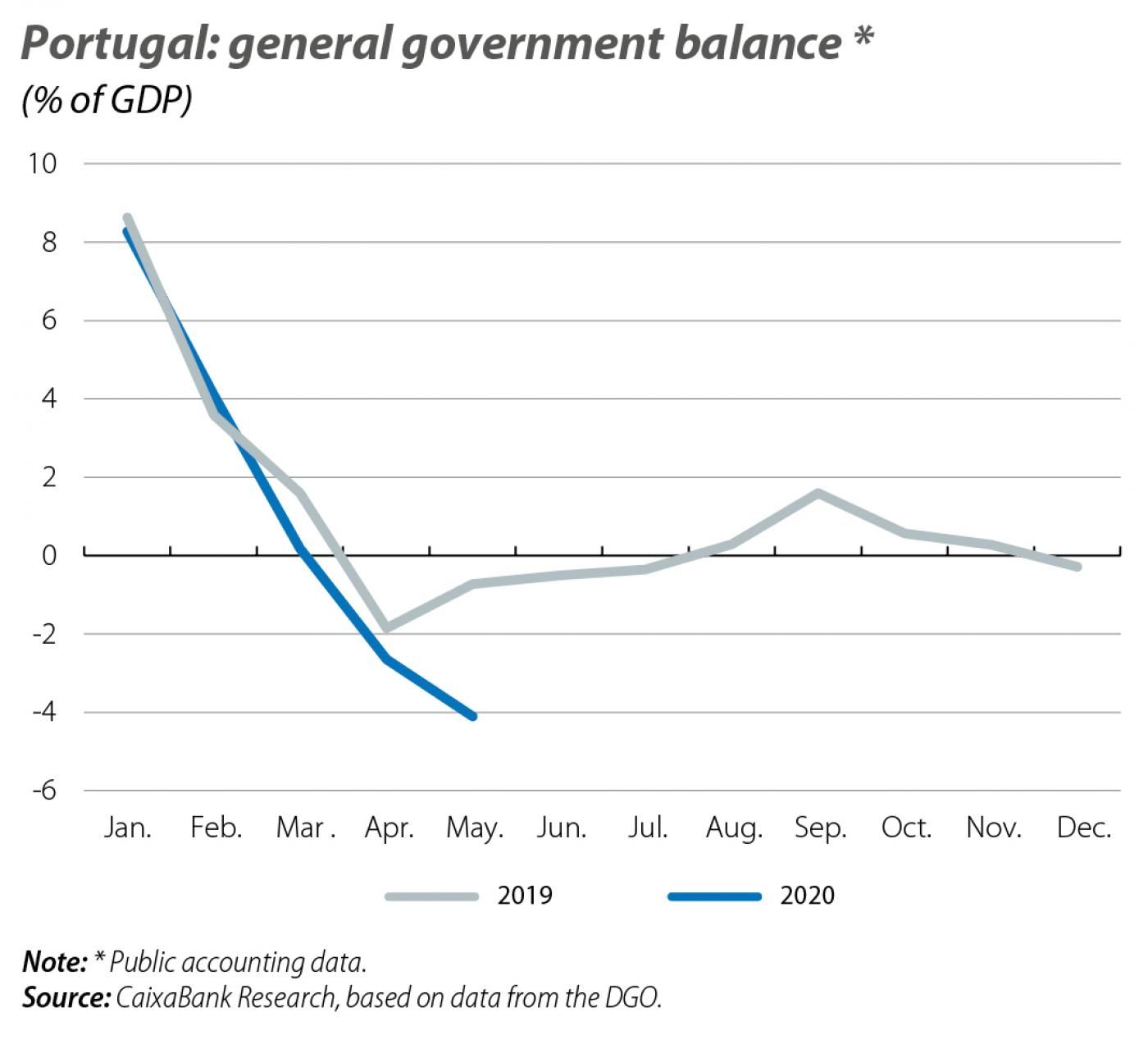 The economy’s lending capacity decreased to 0.6% of GDP in Q1 2020 (four-quarter cumulative balance)

This represents a 2-decimal-point decline compared to the 2019 year end and reflects a deterioration of the lending capacity/funding needs in all sectors except households, in which the savings rate increased by 6 decimal points (reaching 7.4% of disposable income). This increase in household savings could reflect both the constraints of the lockdown itself and greater caution in household spending in a more uncertain environment. 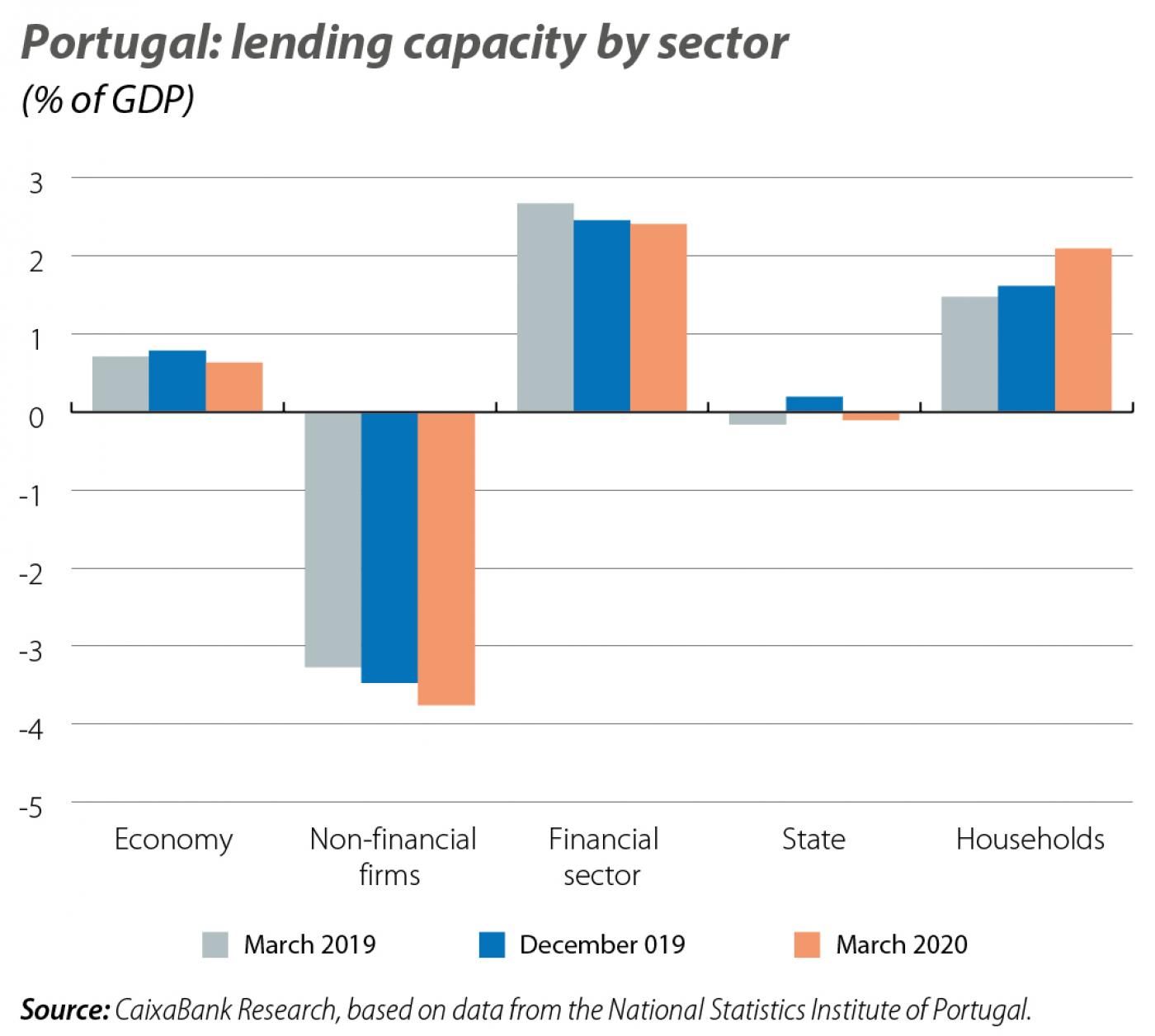 In Q1 2020, the home price index still registered growth of 10.3% year-on-year and of 4.9% quarter-on-quarter. However, in March, when the state of alarm began, the number of transactions decreased by 14.1% year-on-year and their value fell by 3.3%. Moreover, the decline in transactions intensified in April, reaching –17% year-on-year. Faced with this weakening demand, a slowdown in prices is to be expected over the coming months. 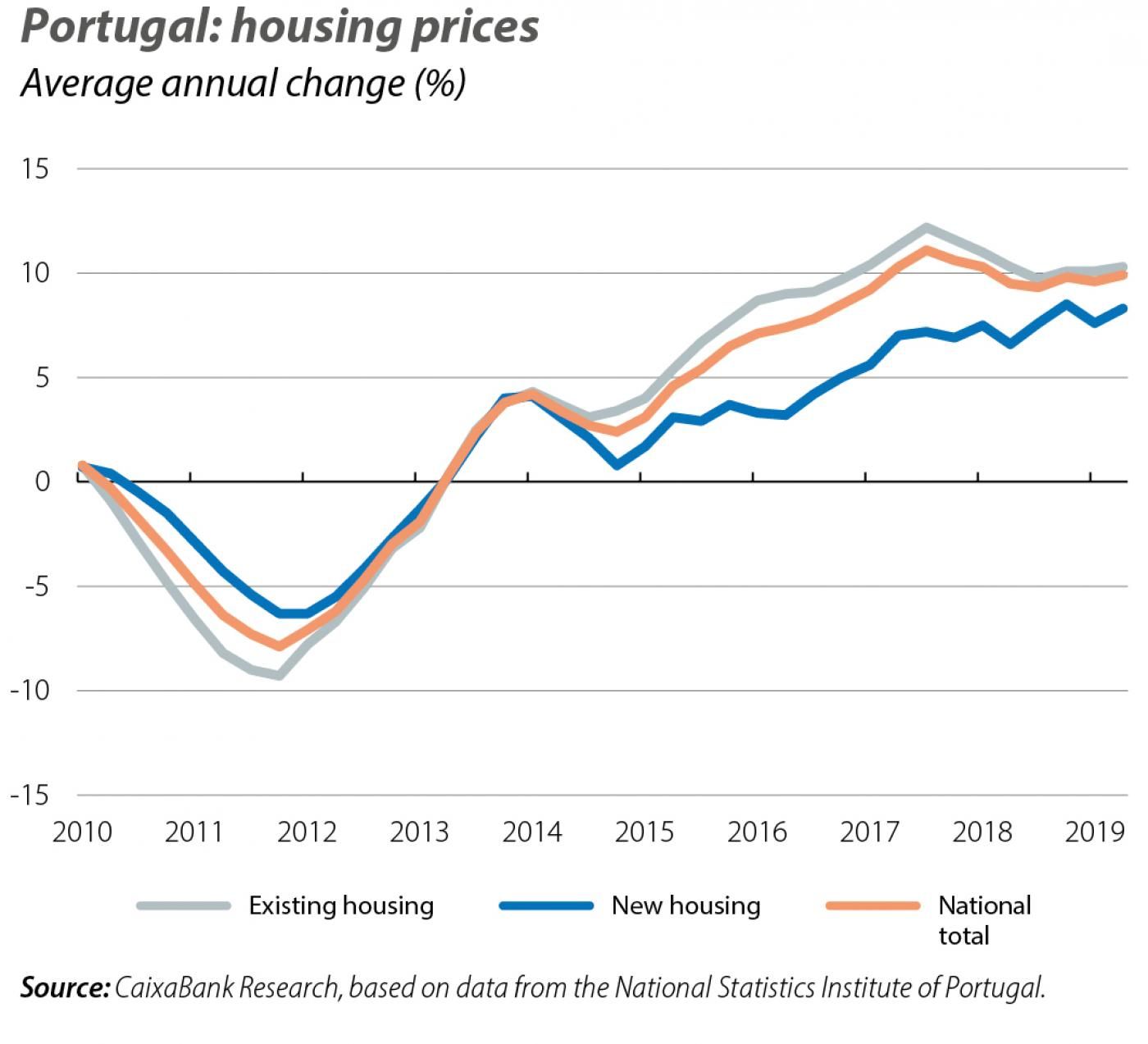 The Bank of Portugal’s latest financial stability report highlights the following risks to the banking sector: the increase in NPLs, the loss of value of real estate assets and of public debt portfolios, the increased pressure on profitability in a context of low incomes and rising provisions, and the difficulties that banks will experience in strengthening their capital position in an incomplete banking union. It also mentions the risk of cybercrime, which is associated with a more digitalised economy and financial system, and the financial risks associated with climate change. As for the latest data to be published, growth in the stock of loans to households slowed in April (1.5% year-on-year versus 1.7% in March), driven by the moderation of consumer credit with the slowdown in new lending (–51% year-on-year in April). In contrast, corporate credit adjusted for portfolio sales rose by 3.3% year-on-year in April, compared to 2.5% in March, with new lending growing by 1% (excluding refinancing). 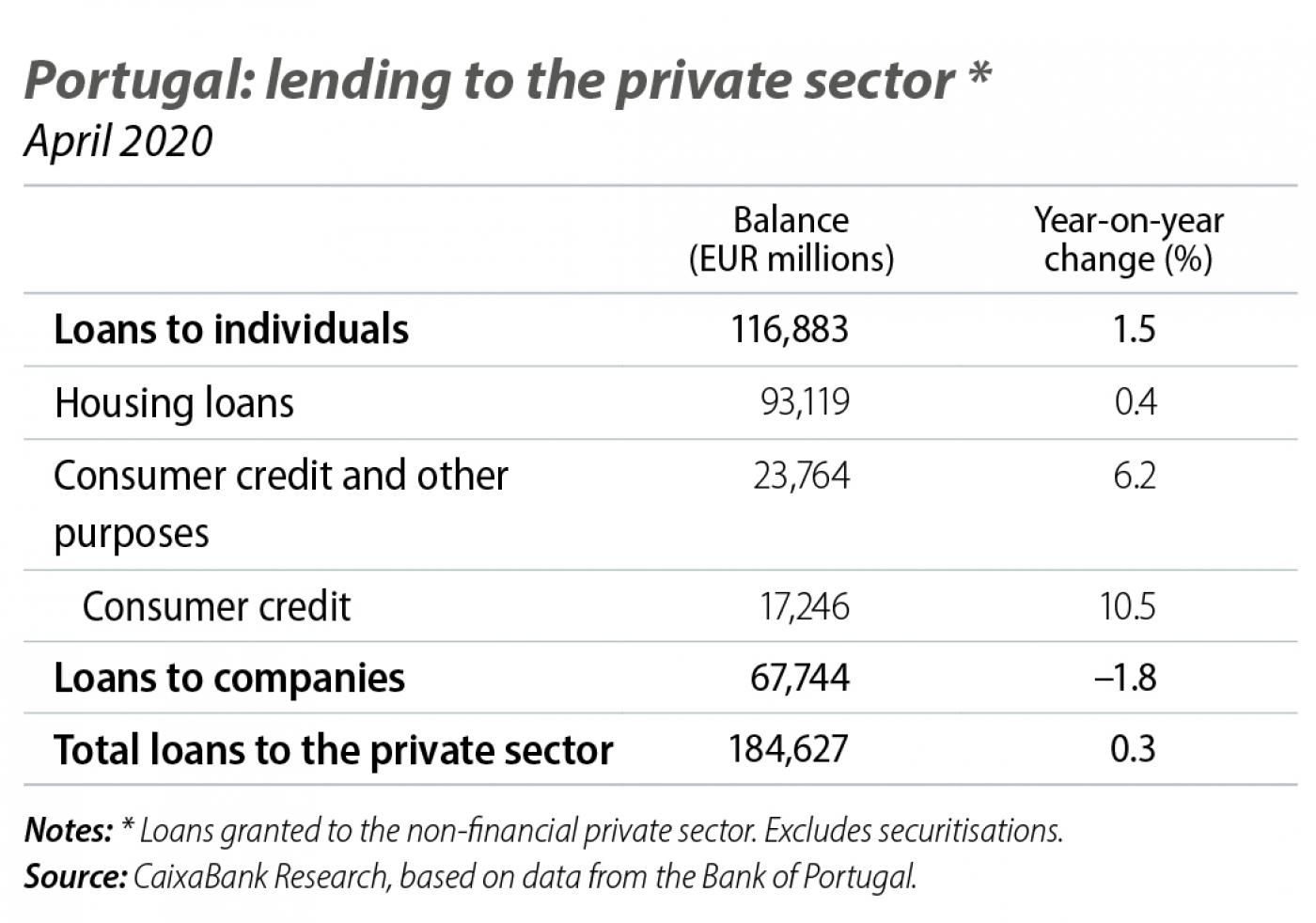 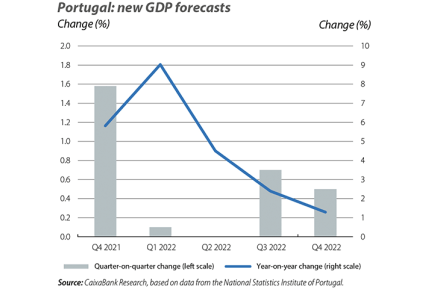 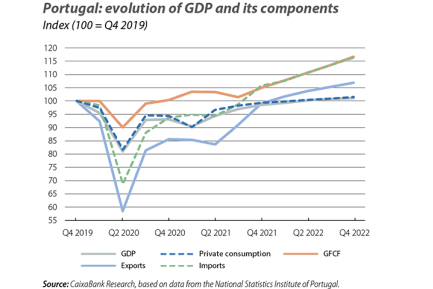