Brexit is official as of 31 January

The first indicators of the year give reason for cautious optimism. After months of decline, the global economic indicators stabilised in the last quarter of 2019. This was reflected in the global composite Purchasing Managers’ Index (PMI), which improved in the final two months of last year (reaching 51.7 points in December), although it still remains rather contained. Furthermore, the GDP growth data for Q4 already available (such as those of the US, China, the euro area and Mexico) indicate that global economic growth stood at around 2.9% year-on-year in the final quarter of last year, equalling the figure for Q3. The slowdown in global growth in 2019 (it is estimated that global GDP will have grown by 2.9% in 2019, compared to 3.6% in 2018) was the result of a combination of factors: the weakening of global trade after the trade tensions between the US and China, uncertainty surrounding Brexit and the widespread cooling of the manufacturing sector, as well as specific difficulties experienced in certain emerging countries such as India, Brazil and Russia. For 2020, a recovery of growth in these countries is expected, which will drive the improvement in global economic activity (bringing it to 3.2% according to CaixaBank Research’s forecasts).

The balance of risks in 2020 is less negative, but remains significant. In particular, both the cooling of the trade tensions between the US and China (who signed a minimal trade agreement in January) and the formalisation of Brexit on 31 January should result in a reduction in the uncertainty that has restricted investment and international trade. In addition, the major economies will continue to enjoy the support of monetary policy, which took a dovish turn in 2019. Even so, there remain significant risks. These include the possibility of a renewed escalation of tensions between the US and China, which cannot be ruled out, the worsening of geopolitical friction relating to Iran, risks related to the high stock market valuations in various segments of the financial markets and the vulnerabilities of several emerging economies.

Brexit is official as of 31 January following the ratification of the agreement in the House of Commons and its approval in the European Parliament. The United Kingdom and the EU have now begun an 11-month transition period with a countdown to reach an agreement on the new relationship, during which time the UK will continue to be part of the single market and the customs union. As explained in the Focus «The new unknowns of Brexit in 2020» in this same Monthly Report, the number of topics on which the EU and the United Kingdom will have to reach an agreement (relating to trade, finance, customs, fishing and the movement of people, etc.) is very high, and time is short. For this reason, while the uncertainty related to Brexit has reduced, it will not disappear, and it could continue to affect both the UK economy and that of European countries.

2019, a challenging year for the euro area. The euro area economy has disappointed analysts, who were expecting a recovery at the end of the year, with GDP growth of 0.1% quarter-on-quarter in Q4 2019 (1.0% year-on-year). This first estimate implies annual growth for 2019 as a whole at 1.2%, significantly below the 1.9% of 2018. Europe is thus confirmed as the main victim of the deterioration of the global environment in 2019, partly due to its high degree of openness to trade and integration into the global economy. In addition, the manufacturing sector has been particularly hard hit by both global uncertainty and a shock to the automotive industry. However, manufacturing firms have begun to show small signs of improvement. In particular, the manufacturing PMI for the euro area improved in January, from 46.3 points in December to 47.8, although it remains below the 50-point threshold (which separates expansive and contractionary territory). In 2020, the euro area economy will continue to be supported by the ECB’s dovish monetary policy, as well as by a moderately expansive fiscal policy. Furthermore, as the reduction in global uncertainties discussed above translates into a gradual recovery in confidence, the economy could display more traction. Among the risks that could jeopardise this recovery, of particular note is the possibility of a rebound in trade tensions with the US, which still has to decide whether to increase tariffs on imports of European cars, as well as the fear of contagion affecting services and domestic demand, which have so far resisted the difficulties experienced in the rest of the economy.

Germany, Europe’s biggest economy and the main focus of various shocks in 2019 ended the year with annual growth of 0.6%. This represents a marked slowdown compared to 2017 and 2018, when the economy grew by 2.8% and 1.6%, respectively. However, the business sentiment data of recent months suggest that the German economy is beginning to recover from a very difficult year. Both the manufacturing PMI and that of services have increased sharply since September, which was the worst month of the year in terms of business sentiment. These figures should alleviate fears of contagion from the recession in the manufacturing sector reaching the services sector. On the other hand, among the GDP data for Q4 that have been published, the figures for France and Italy proved lower than expected. In France, GDP fell 0.1% quarter-on-quarter, hampered by a sharp drop in inventories in a quarter in which consumption continued to grow at a rate of 0.2% despite the strikes of recent months against President Macron’s pension reform. In Italy, GDP fell 0.3% quarter- on-quarter, the sharpest drop since 2013. Although the breakdown by component is not yet available, this decline is also expected to reflect a negative impact from inventories.

Portugal begins 2020 on a good note

The economy keeps the good performance. While we await the publication of GDP for the last quarter of 2019, the available indicators suggest that economic activity will have maintained a similar growth to the year-on-year rate of 1.9% registered in Q3 2019. Thus, it is estimated that Portugal’s GDP will have advanced by around 2% in 2019 as a whole, with the buoyancy of private consumption playing a prominent role and in spite of a demanding external environment. Specifically, in Q4 2019 the coincident economic activity indicator (which exhibits a strong correlation with GDP growth) remained at around 1.9%, while the coincident indicator for private consumption accelerated to 2.7%. For 2020, domestic demand is expected to remain resilient in the face of the still challenging external context (which might also improve if the sources of global uncertainty of recent months finally subside). In fact, the first data relating to 2020 remain favourable. In particular, in January the economic climate indicator, which synthesises sentiment in the various sectors of activity, improved by 1 decimal point to 2.2% year-on-year, favoured by improved sentiment in the manufacturing and construction sectors. However, the first figures of the year have been less positive for consumer confidence, which worsened slightly in January (–7.8 points, versus the –7.2 registered in December), although it is still at comfortable levels.

The labour market is in a phase of maturity. After years of recovery, in recent quarters the maturity of the labour market, the gradual deceleration of the economy and a higher influx of a foreign working-age population have resulted in somewhat less buoyant data in the labour market. The unemployment rate stood at 6.6% on average in 2019 (preliminary estimate), with an annual improvement (–0.4 pps) that is well below that of the previous years (between 2017 and 2018 it decreased from 8.9% to 7.0%). In addition, in December the unemployment rate rose to 6.9% (+0.2 pps compared to the previous month and +0.3 pps compared to December 2018), a reflection of the usual end-of-year seasonality (for instance, between 2000 and 2015 the unemployment rate increased by 0.4 pps on average in Q4 of each year). Furthermore, the working population fell by 3,400 people in year-on-year terms, reversing the path of continuous growth registered since the end of 2013.

The external balance improved in November. The current account deficit decreased to 1,128 million euros (12-month cumulative balance), which is equivalent to 0.5% of GDP and represents an improvement of 0.4 pps of GDP compared to October. This improvement reflects the disappearance of a base effect at the end of 2018: the port strike, which had a significant impact on exports of goods in the last two months of 2018. Specifically, in November 2019 the deficit in the balance of trade in goods registered an improvement, reaching –8.0% of GDP (–0.3 pps compared to October), with exports accelerating up to 3.2% (1.9% in October) and with a slowdown in imports down to 4.9% (5.9% in October). Furthermore, the improvement in the current account, coupled with the high surplus in the capital account, allowed the Portuguese economy’s foreign financing capacity to reach +0.3% of GDP in November (0.0% in October).

The government balance proved better than expected in 2019. The overall fiscal deficit (in cash terms) stood at 0.3% of GDP, an improvement on the 0.5% predicted by the government for the year as a whole, as well as compared to the figure for 2018 (–1.1%). This positive trend was supported by revenue growth far outweighing that of expenditure (4.3% and 2.3%, respectively). In fact, the performance of tax and contributory revenues significantly offset the substantial increase in staff costs and current account transfers. For 2020, the consolidation of the public accounts is expected to continue, albeit at a somewhat more gradual pace than that seen in this past year (we analyse the outlook for the public accounts in 2020 in the Focus «A favourable context facilitates the surplus of the Portuguese public accounts» in this same Monthly Report).

The price of housing continues to rise. In Q3 2019, the housing price index rose by 1.2% quarter-on-quarter and by 10.3% year-on-year, while property sales remained stable (–0.2% year-on-year). The appraisal value of housing, meanwhile, reached 1,321 euros per square metre in December 2019, representing an all-time high. In particular, in 2019 as a whole the price of housing according to appraisals rose by 7.5%, exceeding the 5.8% registered in 2018. However, over the coming quarters, the growth in the construction of new housing (+17.2% year-on-year) and the signs of deceleration emerging from the sector’s confidence index point towards a moderation in the growth rate of house prices.

Banks keep improving the quality of its balance sheets. In Q3 2019, the NPL ratio of the non-financial private sector fell to 8.5%, 0.7 pps less than in Q2 and 10 pps less than the high-point registered in 2016. This reduction can be explained by sales of portfolios of doubtful loans, discounts on assets and the strong performance of the Portuguese economy. Specifically, doubtful loans fell by 1,690 million euros compared to the previous quarter, mainly driven by the non-financial corporations segment (–1,094 million euros). Nevertheless, the default rate of this segment remains high (15.7%). On the other hand, the stock of private sector credit continued to contract in November (–0.8% year-on-year) as a result of the contraction of the stock of loans to non-financial corporations (–3.8%). The stock of credit to households, meanwhile, grew 1.0% year-on-year, driven by the acceleration in consumer credit (9.5% year-on-year). 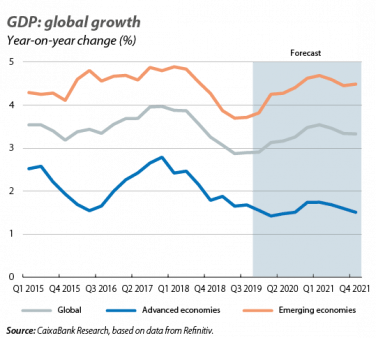 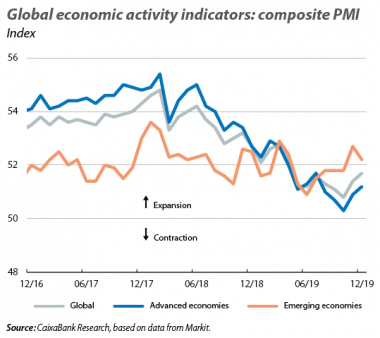 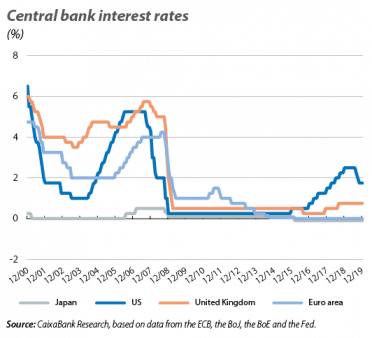 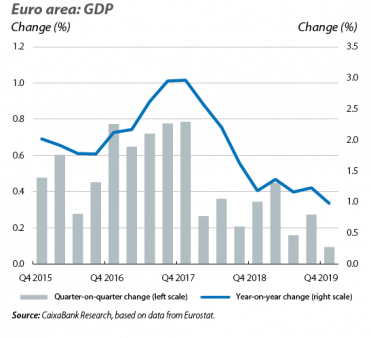 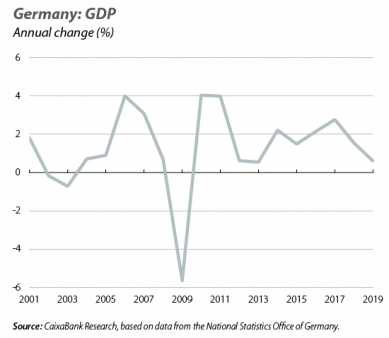 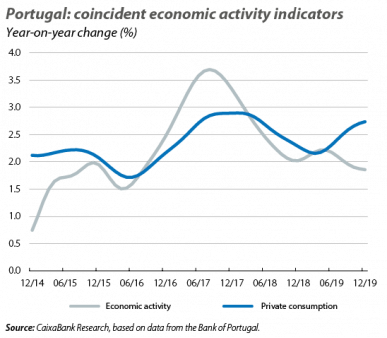 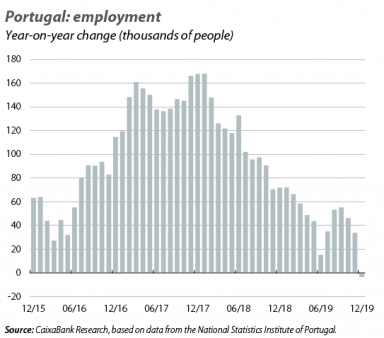 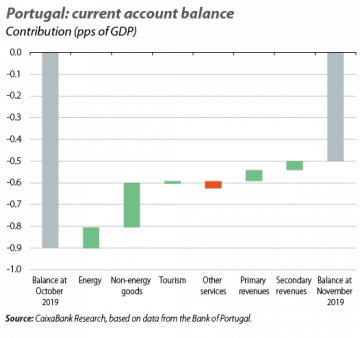 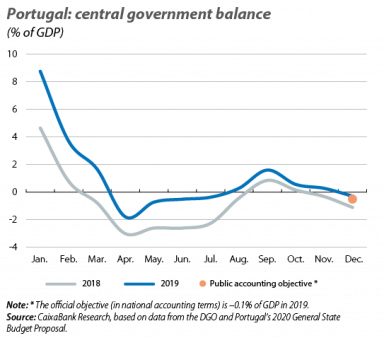 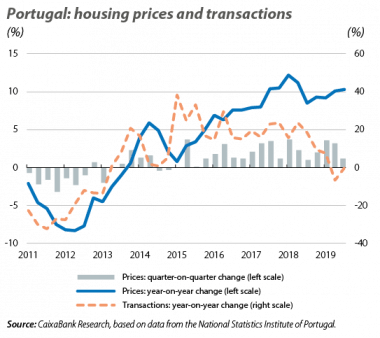 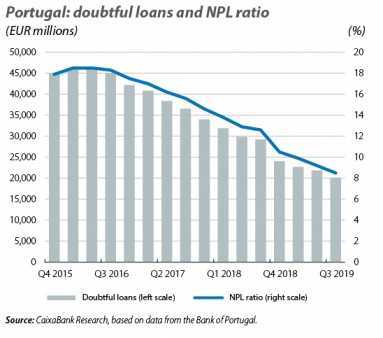