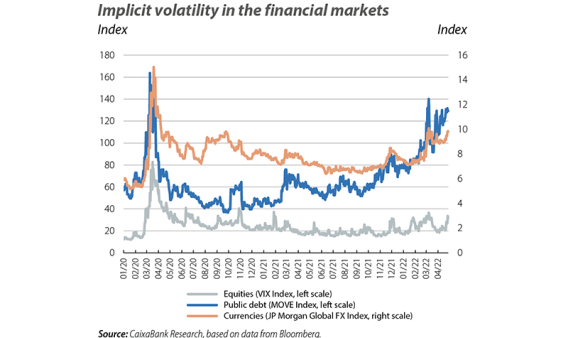 Volatility increases across all asset classes

The financial markets entered Q2 with the same unstable profile as the previous two months. On the one hand, the continued upward pressure on prices was accompanied by the tightening of rhetoric from monetary policymakers in the major developed economies, all of whom pointed out the need to take measures to quell the current high levels of inflation. On the other hand, the increase in lockdowns in China in the face of a rise in Omicron cases, coupled with the persistence and intensification of the war in Ukraine, added new doses of uncertainty to the global growth outlook. In short, all of these components weighed on investor sentiment, indicating a short- and medium-term outlook marked by an acceleration in interest rate hikes and a moderation of economic growth. Volatility also spiked and spread to all asset classes, especially sovereign yield curves. 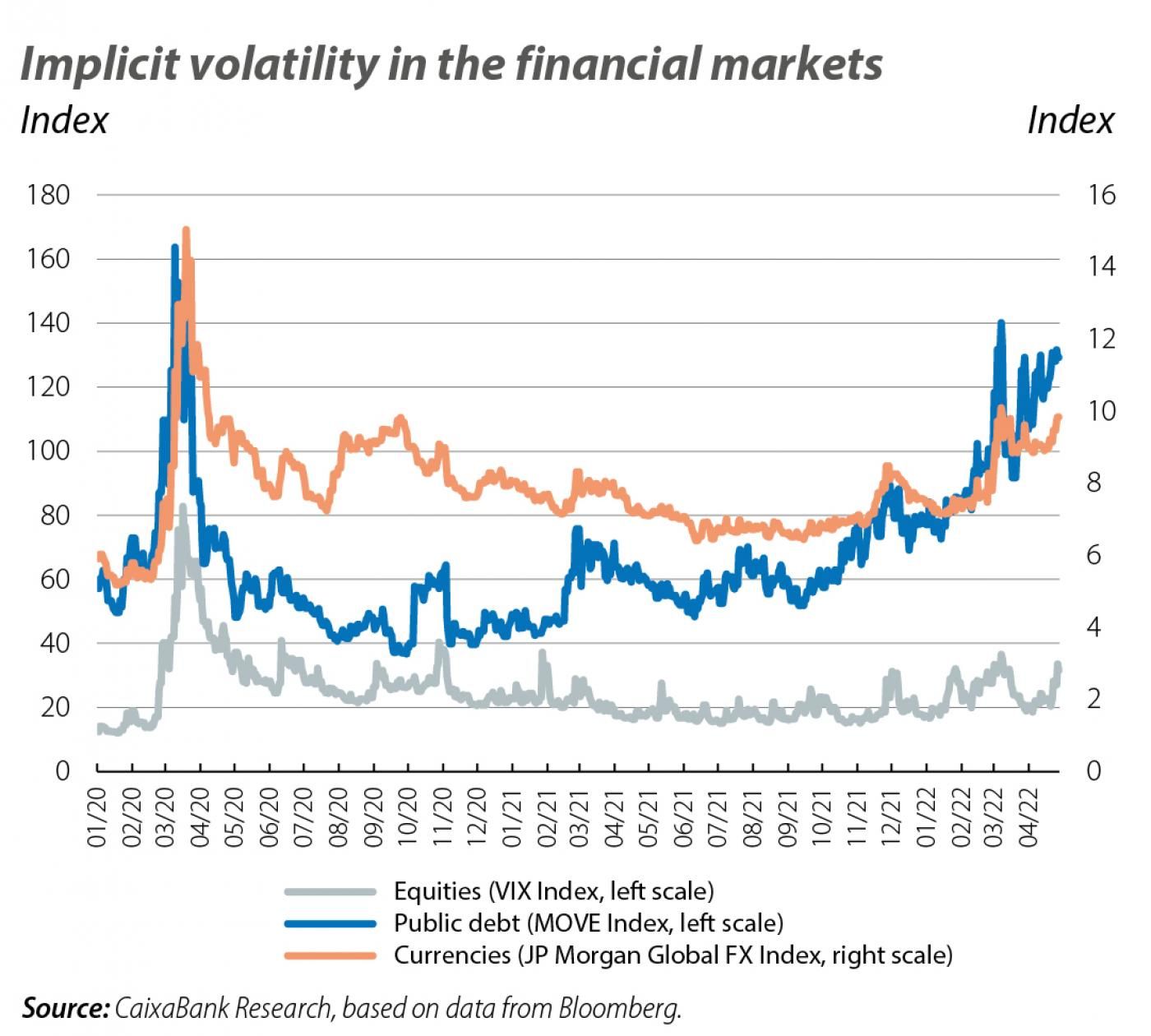 The Fed could accelerate the pace of interest rate hikes

Although there was no FOMC meeting in April, the future of monetary policy in the US has been a major point of interest for investors. The rally in inflation in March (reaching 8.5% in the case of headline inflation), the likelihood of the inflationary pressures persisting for much of 2022 and the strength of the US labour market were sufficient grounds for several members of the Fed, including Jerome Powell, to adopt a more hawkish tone. Specifically, Powell pointed out that, as long as the strength of the economy permitted it, the Fed was contemplating several interest rate hikes, potentially even bringing rates into neutral territory (estimated by the Fed to be 2.4%) by the end of the year. These statements fed investors’ expectations of a more aggressive pattern of rate hikes, which could be kicked off at the May meeting with a 50-bp rise, bringing rates up to the 0.75%-1.00% range, and they caused yields to rise along the sovereign yield curve. Similarly, investors assumed that the process of reducing the size of the central bank’s balance sheet (quantitative tightening) will begin in May at a rate of 95 billion dollars a month, as noted in the minutes of the Fed’s latest meeting. 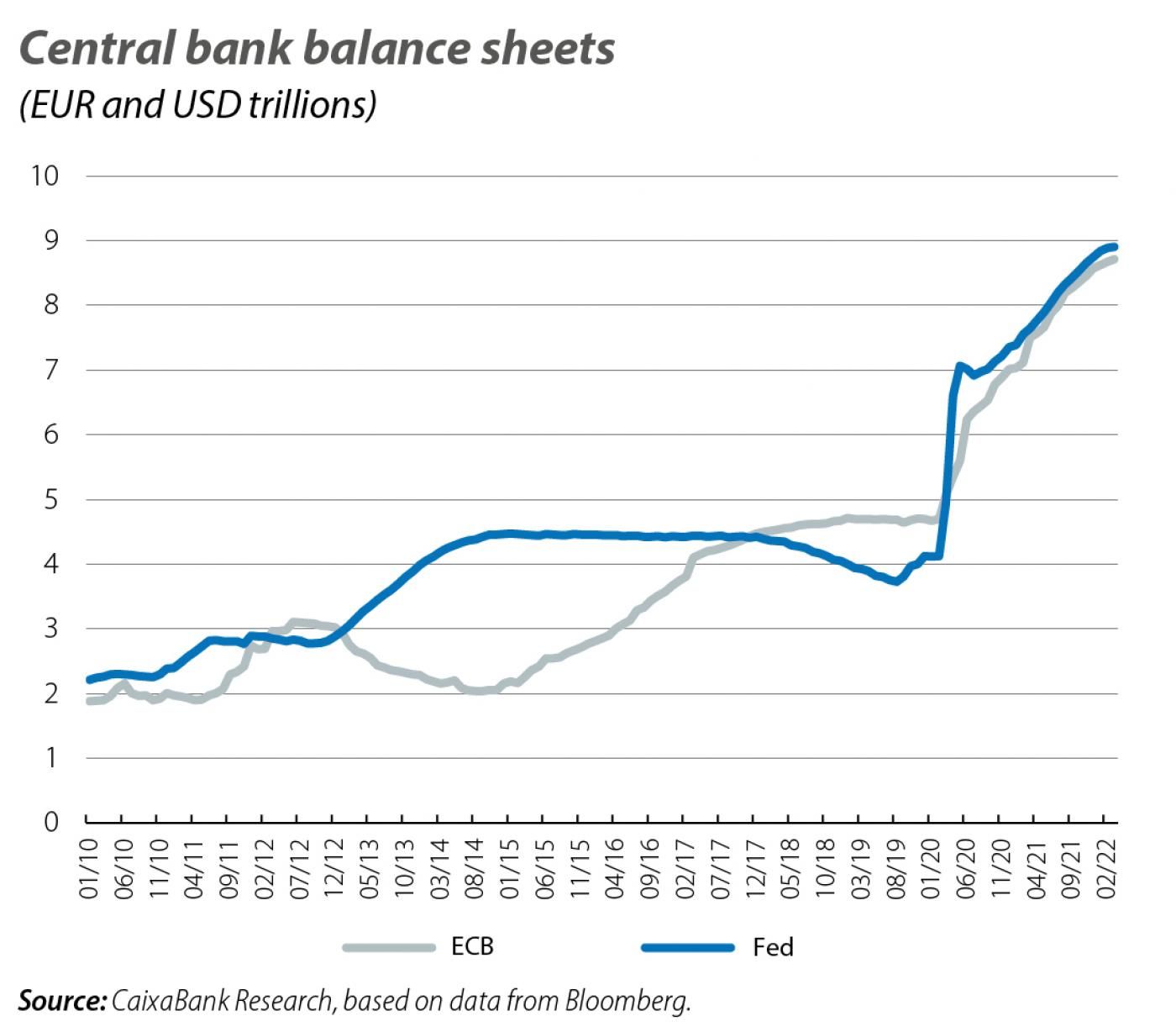 The ECB is also considering further steps for monetary normalisation

At its April meeting, the central bank announced that the latest economic indicators reinforced its intention to bring asset purchases under the APP to an end in Q3 2022. Among these indicators, Christine Lagarde highlighted inflation expectations, which had risen above 2% following the start of the war in Ukraine, and which the Governing Council was monitoring closely in view of the risk of them moving above target. This statement, and Lagarde’s words that the ECB would begin to raise rates «some time after» the end of asset purchases, were sufficient grounds for investors to estimate that the ECB would introduce its first rate hike before the end of the year. This is despite the fact that the ECB’s own assessment of the economic outlook was not particularly optimistic, as a result of the uncertainty triggered by the war. Nevertheless, euro area sovereign yield curves rose significantly in the month, with the 10-year bund approaching 1% and an increase in the periphery risk premia. 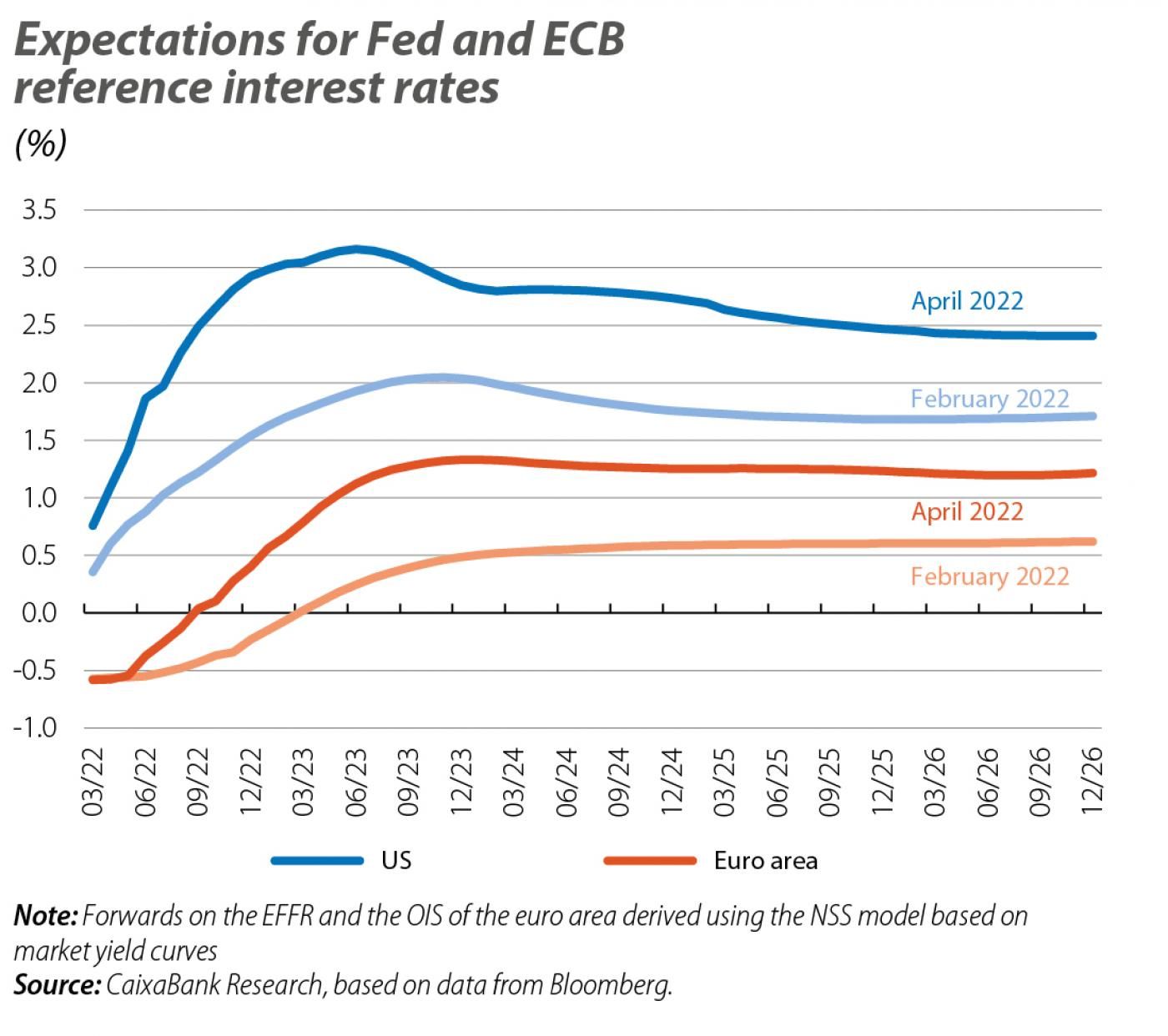 The dollar goes from strength to strength

The more aggressive tone shown by the members of the Fed stood in contrast to the ECB’s gradual approach and to the uncertainty triggered by the health situation in China and the war in Ukraine. In short, these factors supported the dollar, which, favoured by its role as a safe-haven asset, continued to appreciate against all other currencies. In particular, it registered notable gains against the Japanese yen (another currency considered a safe-haven asset), where the divergence in monetary policy between the two economies and the absence of measures from the Japanese authorities to support its currency weakened the yen to a 20-year low. 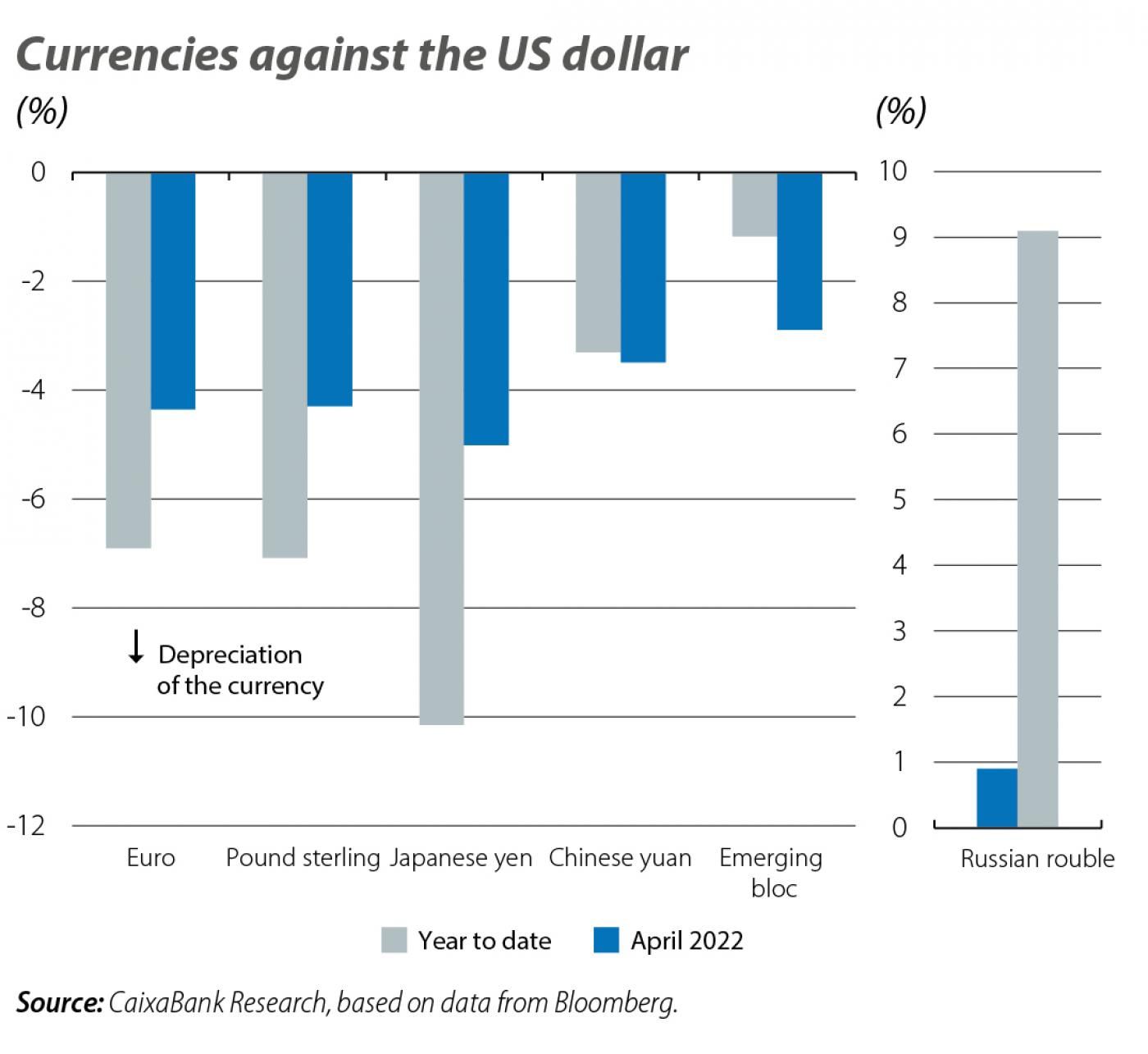 For yet another month, the uncertainty arising from the war in Ukraine was the main factor behind the instability in the energy markets. On the one hand, the interruption of the supply of Russian gas to Poland and Bulgaria (due to their refusal to pay for imports in roubles) triggered a new episode of volatility in European natural gas prices, which was partly offset by the increase in imports of liquefied natural gas. All these swings occurred as the EU was discussing the possibility of imposing a new round of sanctions on Russia that could affect the gas market. On the other hand, the price of a barrel of Brent remained above 100 dollars, supported by new supply barriers in some producing countries and despite the downward revision of estimates of global crude oil demand following the surge in the pandemic in China. 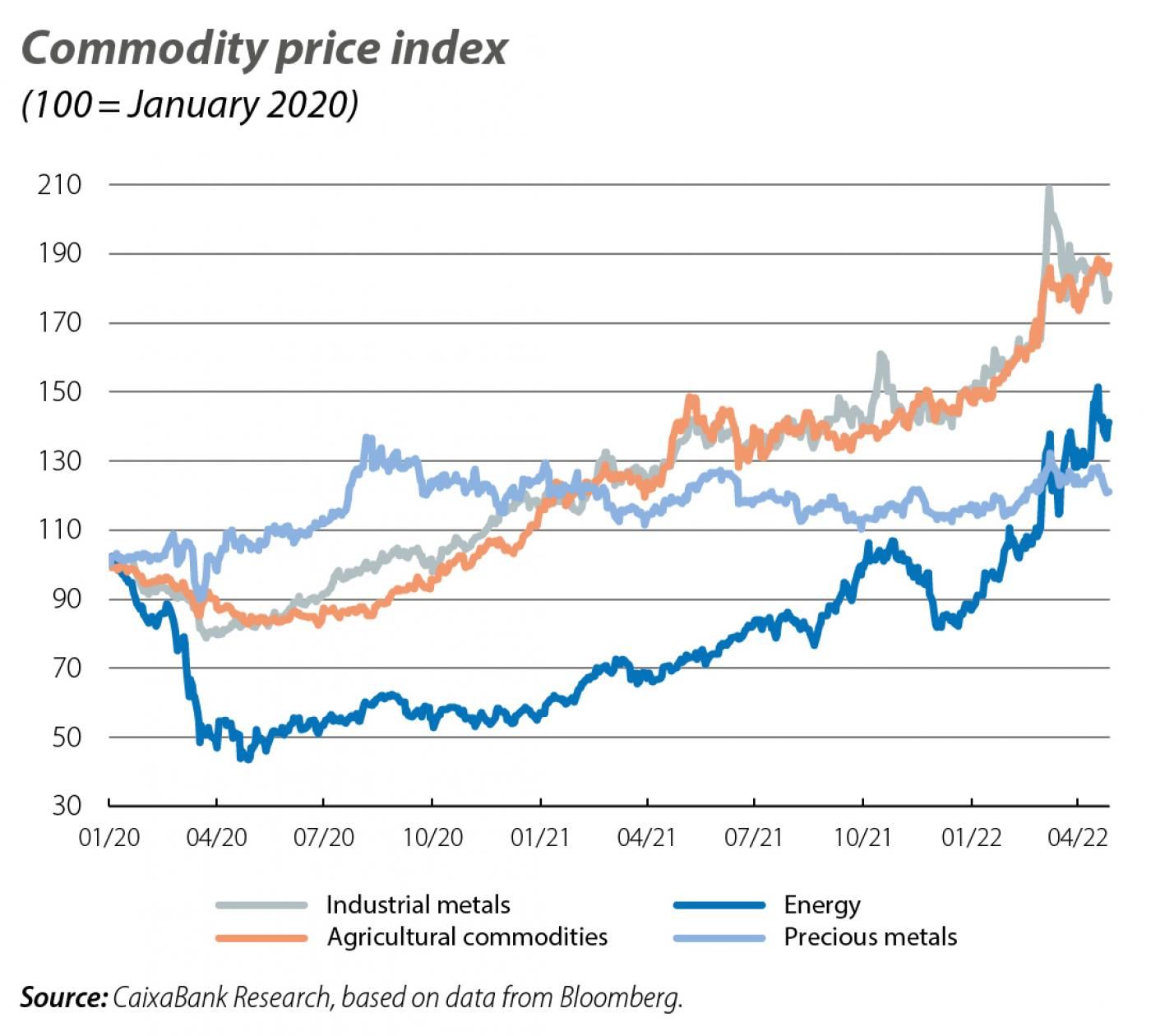 Expectations of a tightening of monetary policies, signs of moderation in China’s growth and the war all weighed on investors’ risk appetite for yet another month, causing the major stock market indices to end the month with losses, with the S&P 500 down more than 8%. In the background, the Q1 2022 corporate earnings campaign got underway, and despite a widespread tightening of margins due to rising inflation there was still a large proportion of positive surprises (in more than 65% of cases up until the end of April). The MSCI EM Index, meanwhile, fell by nearly 6%, where the poor performance of the Chinese indices (punished by the worsening domestic economic outlook and the limited actions by its central bank) combined with losses in the main Latin American indices. 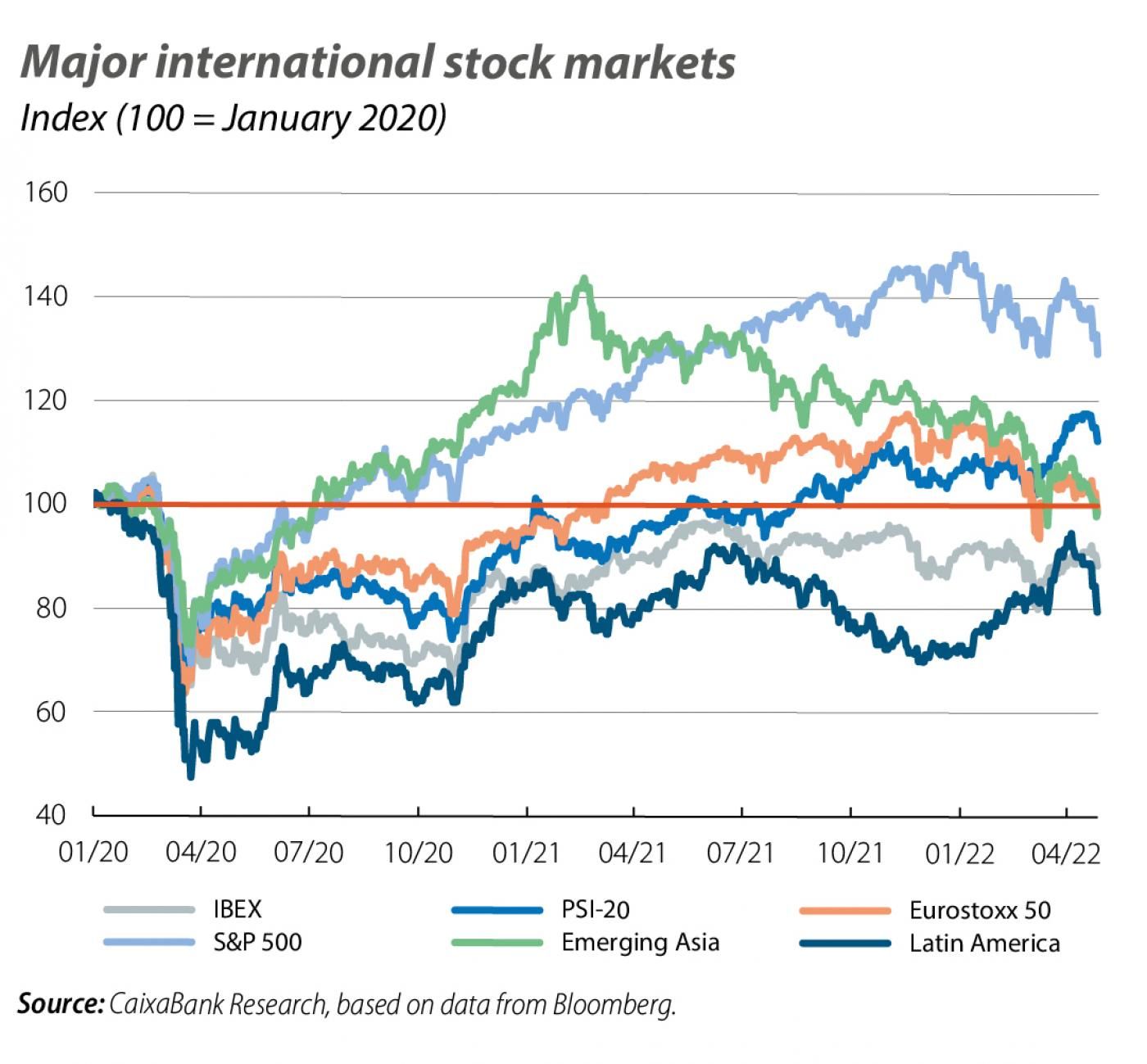