The ECB has room and justification to implement expansionary policies

The winds of recovery are still blowing but the euro area is at the tail end. The latest IMF forecasts confirm this scenario by suggesting, if anything, that the upturn might take a little longer to get going. The decline predicted for 2013 is 0.3% and for 2014 it has proposed a slight advance of 1.1%. Although the euro area is likely to start seeing positive quarter-on-quarter growth rates between the second and third quarter this year, these will be very modest and, after the significant drop in the fourth quarter of 2012, will not be enough to stop 2013 as a whole from having a lower GDP than 2012. Moreover, the differences between countries will still be considerable. While we expect Germany to grow by 0.6%, the French economy will remain at a standstill with a decline of –0.1%. Although the periphery countries are still bringing up the rear, with decreases forecast for this year ranging from –4.2% for Greece to –1.6% for Spain, in 2014 the IMF expects all these countries to see positive growth rates of between 0.5% and  1%.

Business indicators, erratic throughout the first quarter of 2011, seem neither to be in favour nor against the recovery. The rate of deterioration in activity seems to be slowing down as, on average, the values recorded by the different indicators were at levels higher than those of the previous quarter. Industrial production in the euro area, for example, shows a slight upward trend. In spite of the 3.1% drop year-on-year in February, the average reduction in the first two months of the year was lower than that of the last quarter of 2012. This pattern is quite widespread between countries. However, when we analyze the developments in other indicators for which we already have March and April's figures, this trend blurs and it's more difficult to make out any clear improvement. For example, for the euro area as a whole, the PMI (purchasing managers' index) for services in March wiped out part of the progress made at the start of the year, although it was still higher than in the last quarter of 2012. The index for the manufacturing sector is following a similar pattern. The initial estimates for these indicators in April do not suggest any great variations in the euro area either. Of note, however, is the sharp drop observed in the German index, which has returned to contraction after 4 consecutive months of expansion.

The confidence indices, which do show more solid progress, took a break in March, partly due to the doubts caused by Cyprus's bailout and the outcome of Italy's elections. For example, the EC economic sentiment index fell by 1.1 points after four months of uninterrupted rises. This slight drop was widespread throughout all activity sectors and in most countries, particularly Germany and France. Nonetheless, the trend seen over the last few months in the aggregate indicator for the euro area seems quite robust and, although not very pronounced, should this continue throughout the rest of the year it would be enough for the economic sentiment index to rise, between the second and third quarter, to levels where growth rates have historically been positive. In order for this improved confidence to firm up, however, it is essential to push ahead with European integration, both on the fiscal front and in terms of banking union. In this respect, the advances made by the European Council in June will once again be vitally important.

The euro area's recovery is still lacking the support of domestic demand, making it weaker and more vulnerable. The unemployment rate shows no signs of stabilizing; in March it posted a new record high of 12.1% and this makes it extremely difficult for household consumption to recover, still immersed in a clearly downward trend. After a rather promising January, retail sales started to fall again in February and took the year-on-year rate of change to –1.4%. However, differences between countries are considerable. Wherever the unemployment rate has more stoically withstood the buffeting of the crisis, such as in Germany where it is at an all-time low, signs of recovery have been seen in the last few months. The Spanish case is the opposite. Between the fourth quarter of 2012 and the first of 2013, 686,000 jobs were lost and the unemployment rate rose from 25.0% to 27.2%. The drop in retail sales has been historic. This, however, is also a result of purchases being brought forward due to the hike in VAT in September last year, as well as the elimination of the Christmas bonus for civil servants, effects that should partly reverse in the short term.

The labour market is finding it hard to get going. For the euro area as a whole, the index of employment expectations for the next three months has consolidated the rises of December and January but remains at a very low level. However, the path outlined by the index for each country is very different and perhaps reveals the underlying trends in each case. In Germany, the index is stable at levels above the euro area average while a notable improvement can
be seen in Spain.

Employment expectations remain at a very low level in France which, added to the country's loss of competitiveness over the last few years, is not painting a very encouraging picture. In general there are no great imbalances at a macroeconomic level: a moderate public deficit (4.8% of GDP), a level of private and public debt that does not appear to be alarming (165% of GDP and 90%, respectively) and a relatively healthy financial sector. However, the trend in productivity has been very poor over the last decade. The most palpable consequence is the country's continual loss of competitiveness at an international level, translated into a significant drop in market share for its exports. However, the most worrying sign is actually France's apparent inability to carry out the structural reforms that could turn this situation around. Within this context, it is surprising that the IMF places France's long-term growth capacity at 1.9% and that of Germany at 1.2%. In any case, the situation of the French economy is delicate and must therefore be closely monitored.

Inflation is responding to the weak domestic demand and the fall in oil prices standing at 1.2% in April according to Eurostat's flash estimate. In one year it has fallen by 1.4 points and all the evidence suggests that this trend should continue over the coming months. No great changes are expected in taxation and domestic demand is unlikely to push it up.

The ECB has room and justification to implement expansionary policies. Private credit has yet to recover, although some stabilization has been observed in its rate of decline, especially in terms of credit to enterprises. Credit to households is on a downward slide although still posting slightly positive rates of change. Nevertheless, what the ECB still has to sort out is how to reduce the current fragmentation of Europe's financial system. The clearest example of this problem is the range of different conditions for SMEs to access credit depending on which country they reside in. In this respect, at the April meeting of the ECB's Governing Council, Mario Draghi explained that they are looking at possible measures to help firms access financing, although he stressed they already have the possibility to discount loans as collateral in the auctions. The ECB repeated that it cannot replace capital that is lacking nor can it compensate for lack of action by governments.

Hungary's GDP slumped to 2.8% in the last quarter of 2012, setting off some alarm bells. In March, the new governor of the central bank stated his intention to reduce the relative weight of foreign banks in the financial system
to some extent, as well as regulating the free fixing of energy prices and modify the conditions for foreign currency loans. This pushed up the country's risk premium and led to a depreciation of the forint and a downgrade in the credit rating of four large Hungarian banks by Moody's. However, in the last few weeks the country's production and financial environment seems to have been less hazardous. Although the deputy governor of the central bank has resigned, possibly due to discrepancies regarding the new guidelines for monetary policy (more oriented towards supporting growth), the initial decisions taken by the government and the central bank to reduce the burden of foreign currency loans for individuals and small firms are prudent. The central bank will offer two credit facilities at a preferential rate that will allow banks to offer SMEs cheap financing, one of these specifically aimed at replacing foreign exchange loans with funding in forints. This moderate bias has been well received by international investors to the point that the country's risk premium has returned to its situation before these measures were announced. 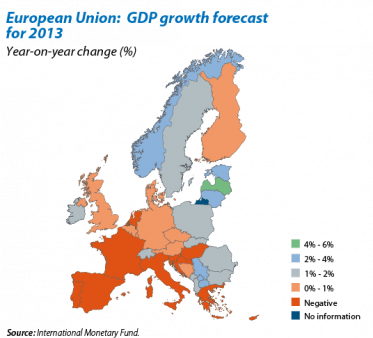 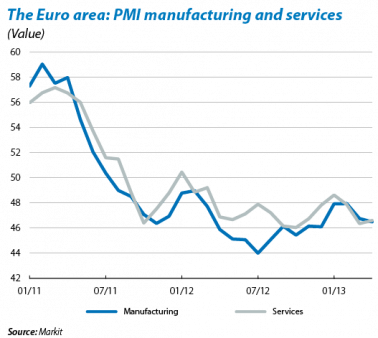 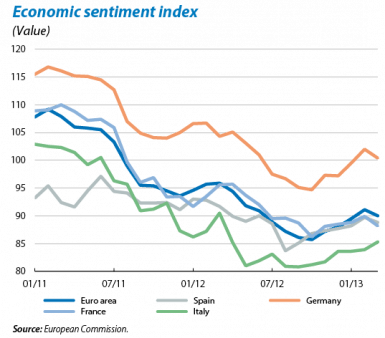 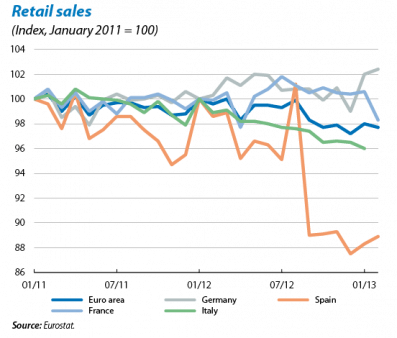 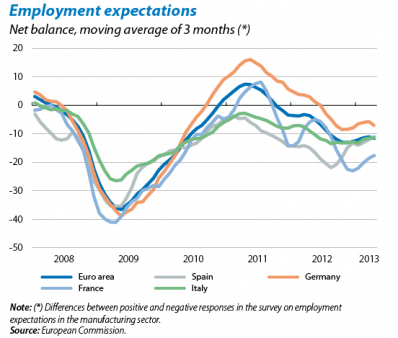 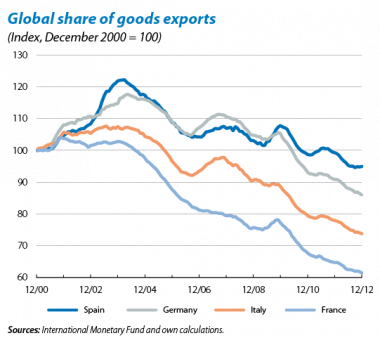 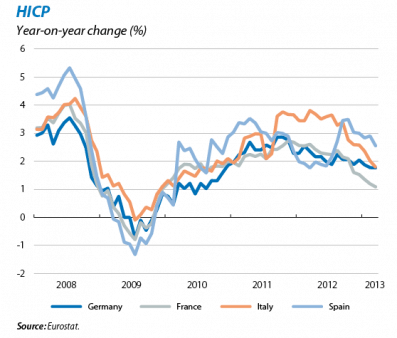 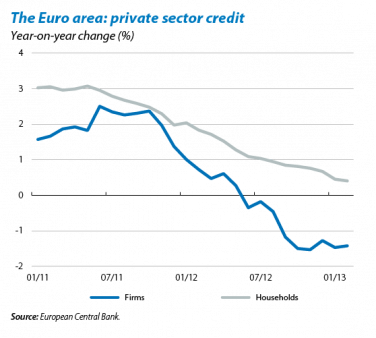 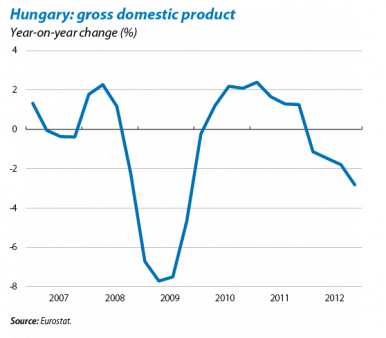