Global activity indicators continue to show a positive tone in Q2. The global business sentiment index (PMI) reflects this trend. Although there was a slight decline in the indicator after reaching its highest point in almost three and a half years in February, in April it rebounded slightly and lies in clearly expansionary territory, both in the advanced and the emerging countries. At the sector level, both the manufacturing and the services index also continue to indicate notable growth. The global economic data therefore support the scenario predicted by CaixaBank Research for 2018, which involves global growth remaining at close to 4%.

However, the downside risks are increasing. Despite the encouraging trend observed so far this year, geopolitical tensions have increased in recent months, dragging forecasts down. Although they have abated in recent weeks, there are still fears of a trade war after the US threatened to adopt a more protectionist attitude. In the political sphere, of particular note is the uncertainty in Italy and the US’ decision to abandon the nuclear deal with Iran. This latter action has led to an increase in geopolitical uncertainty in the Middle East, a key region for the supply of oil, which has pushed its price up (at one point it reached 80 dollars per barrel). In addition to the political tensions, also significant are the macrofinancial risks that certain emerging and developing countries are enduring, highlighted this month by the currency crisis experienced by Argentina and the collapse of the Turkish lira. Finally, we should also take into account the potential negative impact that a greater-than-expected tightening of global financial conditions could have on growth, particularly in the emerging markets with greater vulnerabilities (for more details, see the article «Fragile emerging countries: Argentina and Turkey, neither exceptional cases, nor the first of many others» in this same Monthly Report).

The economic indicators continue to indicate solid growth. Following the encouraging GDP growth figure for Q1 2018, the economic indicators available for Q2 confirm that this positive phase is continuing. The manufacturing and services business sentiment indices (ISM) stood at 55.7 and 55.2 points, respectively. These figures suggest that the good pace of growth in the secondary and tertiary sectors is sustained, despite both indices falling slightly in the last month. The marked increase in industrial production and in retail sales registered in April also point towards strong growth in economic activity and private consumption in Q2.

Close to full employment. The data on the labour market continue to impress. In April, the activity rate stood at 62.8% and 164,000 jobs were created (exceeding the figure for the previous month). This latter figure is particularly significant, since it is above what is considered to be the equilibrium for job creation for where the US economy currently lies in the economic cycle, namely between 75,000 and 125,000 jobs. In addition, the unemployment rate fell to 3.9%, after six months of stagnation at 4.1%. Finally, wages rose by a significant 2.6% year-on-year, and several indicators, such as those provided by the survey of the National Federation of Independent Business (NFIB), suggest that wage growth will continue to rise over the coming quarters. This is expected to put upward pressure on inflation.

The upward trend of inflation seen in recent months continues. The headline inflation rate stood at 2.5% in April, 1 decimal point higher than in the previous month. Meanwhile, core inflation, which excludes the more volatile prices of energy and food, remained at 2.1%. This upward trend will continue over the coming months, both in headline inflation and core inflation. This continuity in the increase in inflation is largely due to a considerable underlying upward effect caused by the sharp declines in wireless telephone prices experienced in 2017 during these months, which will not reoccur this year. On the other hand, the improvement in the inflation expectations, as reflected in the encouraging figure of the index developed by the University of Michigan, also reinforces this upward trend. In this context, everything is pointing towards another increase in the reference rate at the Fed’s next meeting scheduled to take place in June.

Japan: GDP for Q1 2018 provides a disappointing surprise. Following eight consecutive quarters of positive growth, the longest period of straight positive growth since 1989, the Japanese economy shrank by 0.2% in quarter-on-quarter terms in Q1 2018 (+1.0% year-on-year). Although the figure has been driven by temporary factors which have had a negative effect on private consumption, such as bad weather, the truth is that the generalised weakness in demand has been an unexpected disappointment: both private consumption and investment have fallen, while employment income and business profits have increased markedly. On the whole, this denotes a certain unease regarding what the future holds for the economy, both among households and businesses. Furthermore, the figures for Q4 2017 have also suffered a strong downward revision.

There is growing concern about the economic situation in several emerging economies. After the events of the last month, including Argentina’s currency crisis, the concern regarding the potential weakness of the emerging markets has become apparent. An example of this is the sudden stop in portfolio capital inflows (debt and equity) experienced by the emerging economies in April, with an outflow of 200 million dollars. This contrasts with the 11,300 million dollars received in the previous month. This sudden change of attitudes among investors is supported by the strengthening of the US dollar, as well as by the rate rises being carried out by theFed, which in recent weeks have led to a notable upswing in the 10-year US bond. Added to this are the imminent elections that are due to be held in numerous countries across Latin America and in Turkey. All this suggests that, although the systemic risk is limited, the macrofinancial conditions will continue to test the resilience of the emerging markets over the coming quarters.

China maintains export rates despite trade tensions. Chinese exports rose by 12.9% year-on-year in April, following March’s discouraging figure. In particular, exports from China to the US do not appear to have been adversely affected by the protectionist threats from the latter, growing by a notable 9.7% in year-on-year terms in April. However, it is possible that this strong upswing is driven by the fears that the trade war between China and the US will end up materialising, triggering exporting firms to bring their shipments forward to avoid future tariff increases. In more general terms, economic activity in China continues to show a positive tone following the encouraging figure for Q1 2018. Of particular note are the strong increases in industrial production and in the PMI for manufacturing and services recorded in April.

Weaker-than-expected growth in some emerging markets. In Russia, GDP grew by 1.3% year-on-year in Q1 2018, somewhat lower than expected. While it is true that this represents an improvement over the 0.9% recorded in Q4 2017, we must bear in mind that this latter figure is dragged down by an underlying negative effect (Q4 2016 was the last quarter in which Russia was not subject to the oil production limit agreed with OPEC). GDP growth in Mexico was also lower than expected, and it is feared that the uncertainty generated by the NAFTA negotiations and the presidential elections scheduled for 1 July are stifling investment and household consumption. Brazil has also lost momentum in Q1 2018, with year-on-year growth of 1.2%, which contrasts with the 2.1% experienced in Q4 2017. Although this figure
is slightly lower than was expected, Brazil has accumulated five consecutive quarters of growth, which consolidates its economic recovery following the deep recession experienced in 2015-2016. The slowdown in GDP growth has been the result of the poor performance of public consumption and exports. All in all, investment has remained stable, which suggests that the political uncertainty is not doing too much to dent business confidence. Finally, India grew by 7.7% year-on-year, 7 decimal points higher than in the previous quarter, making it the fastest-growing large economy in Q1 2018. This data confirms the economy’s recovery following the temporary instability brought about by the implementation of the goods and services tax (GST) in 2017 and the demonetisation, which overshadowed the country’s short-term growth outlook. 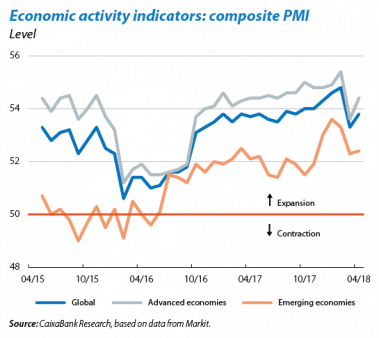 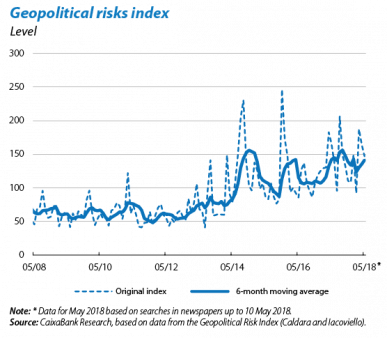 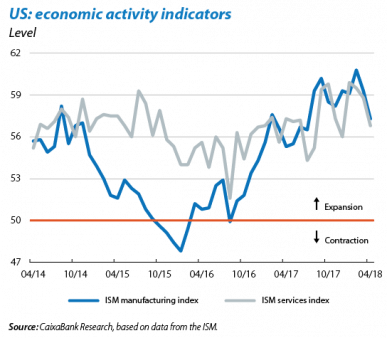 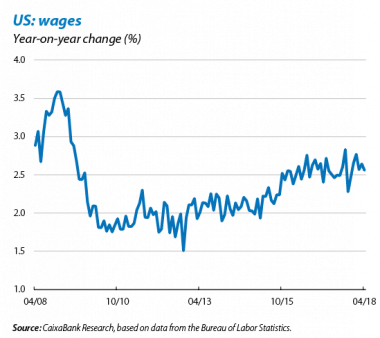 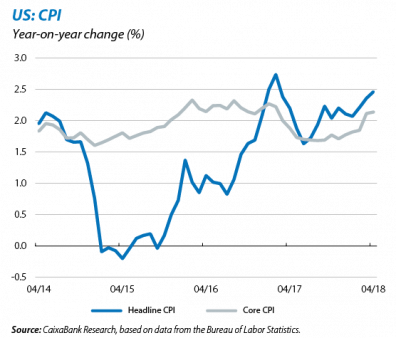 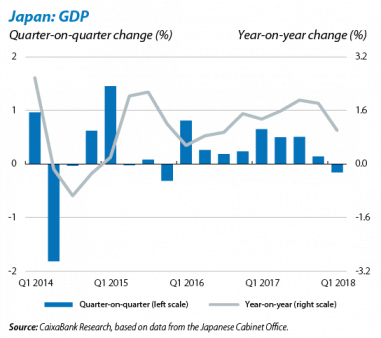 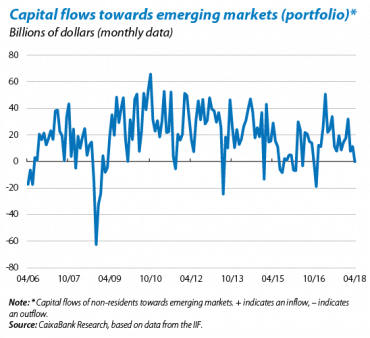 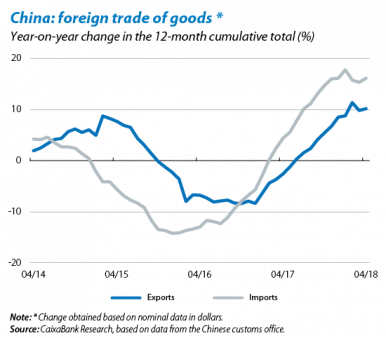 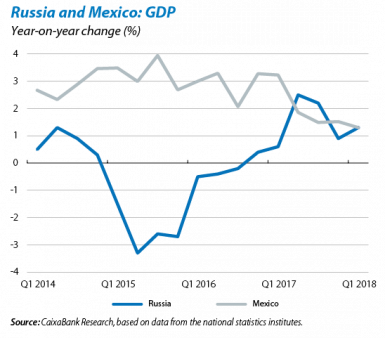