Global activity indicators are still showing significant growth at the beginning of Q4. In October, the global composite Purchasing Manager Index (that includes both manufacturing and services) rose slightly to 54.0 points, comfortably in the expansionary zone. By sector, both
the manufacturing and services index continued to point to notable growth in economic activity. At a regional level, euro area gains were once again strong in spite of a slight correction compared with September. This trend endorses the CaixaBank Research scenario which predicts moderate acceleration in world growth from 3.2% in 2016 to 3.6% in 2017 and 3.8% in 2018.

There are still pockets of uncertainty in this overall context of improvement, however. Particularly those of a financial nature, as well as a substantial number of geopolitical, political and trade risks. Some of the most prominent geopolitical risks are the intensification of the Cold War in the Middle East and persistent tensions with North Korea (see «Risks in 2018: (geo)politics and international trade» in the Dossier of this Monthly Report). In terms of trade, the outcome of the NAFTA negotiations is still a cause for concern. Although we believe these negotiations will produce a treaty that modernises economic relations between the US, Canada and Mexico, it might represent a backward step in terms of trade. For the time being, the most recent data point to significant advances in the trade of goods. This is not surprising given that, in the short term, the acceleration of economic activity boosts trade. In the longer term, international trade is also a major source of global economic growth. Protectionist outbreaks are therefore a downside risk to these good prospects.

The US economy continues to advance steadily. According to the Bureau of Economic Analysis’s second GDP estimate, the US economy grew by a strong 0.8% quarter-on-quarter in Q3 (2.3% year-on-year). This was above the most optimistic forecasts and suggests the impact of Hurricanes Harvey and Irma has been less than expected. Growth will therefore end the year slightly higher than initially forecast (2.2% for 2017 as a whole). Early economic activity indicators for Q4 suggest growth has also remained strong in the final part of the year. In November, the Conference Board Consumer Confidence Index climbed to 129.5 points, a level not seen for the past 17 years, while the ISM business sentiment indices were comfortably in the expansionary zone in October, both for manufacturing and services (58.7 and 60.1 points, respectively).

The labour market performed well again in October. After the poor figures posted in September due to the hurricanes, 261,000 jobs were created in October. The unemployment rate fell to 4.1% while the broader unemployment rate (U6, which takes into account discouraged workers and those working part-time but looking for full-time work, among other aspects) fell to 7.9%, the lowest level achieved during the
last expansionary phase, namely in December 2006. Wages, on the other hand, rose by 2.4% year-on-year, 0.5 pp less than in September, the slowest growth since February 2016. In an economy so close to full employment, we would definitely expect stronger wage growth, as seen in the past (above 3%). However, structural factors such as globalisation, demographics and technology are very likely to be pushing down wage rises.

Inflation data supports another hike in the fed funds rate at the end of the year. US inflation stood at 2.0% in October, 0.2 pp below the previous month’s figure. However, core inflation, less subject to the ups and downs in energy and food prices, stood at 1.8%, 0.1 pp higher than September after five months of stagnation. Undoubtedly this rise in the core figure will encourage the Fed to raise its benchmark interest rate at its next meeting in December, as predicted by CaixaBank Research.

Steps are being taken to pass the US tax reform. With strong support from Republicans, the House of Representatives passed the proposed tax reform bill. However, the Senate, where Republicans have a smaller majority, is still drafting its own proposal. For such tax reforms to come into effect, both the House of Representatives and the Senate must pass the same version of the bill. We expect this to happen no later than the end of Q1 2018.

Japan’s GDP grew again in Q3 2017, posting seven quarters of positive growth, something that has not happened since 2001. In quarter-on-quarter terms, the Japanese economy advanced by a significant 0.3% (1.7% year-on-year), supported by external demand due to robust growth in exports and a drop in imports. Inventories also made a significant positive contribution. Both components offset the decline in private consumption, which suffered a temporary dip in Q3. Given these figures, the growth forecast for 2017 as a whole is 1.5% (0.1 higher than the previous forecast).

Early economic activity indicators suggest this considerable growth will continue in the last quarter of the year. Japanese exports once again rose substantially in October, with year-on-year growth of 14.0% (14.1% in September). By region, exports to China were particularly important while sales to the US slowed slightly after months of strong growth. Exports also grew strongly in real terms, suggesting that foreign trade could make an important contribution to GDP growth in Q4, as it did in Q3. Both business and consumer sentiment indices stood at very high levels in October.

Capital is still flowing into the emerging countries. In October and November, emerging markets continued to attract foreign investment, with net capital inflows of USD 13.3 billion as a monthly average (portfolio flows, according to IIF estimates). These solid capital inflows are supported by the remarkable rate of growth in economic activity for the emerging countries as a whole, now at about 5% for the aggregate of the main economies.

In China, economic activity indicators continue to look positive despite October’s slowdown. Retail sales were up 10.0% year-on-year, a remarkable performance albeit 0.3 pp lower than the previous month, partly due to seasonal factors. Industrial production grew by 6.2% in October (6.6% in September). The impact of the new environmental regulations on industrial activity lies behind much of this moderation. Exports (in nominal and dollar terms) grew by a considerable 5.4% year-on-year in October (cumulative over 12 months) thanks to the acceleration in exports to Japan and the EU. However, the monthly figure (6.9%) was slightly lower than in September (8.1%) due to a slowdown in exports of steel and coking coal, industries affected by the aforementioned environmental measures. Beyond this slowdown in October, the good activity data for 2017 as a whole point to annual growth of 6.8% for 2017 and 6.5% for 2018 (the latter figure is slightly higher than the previous forecast).

India’s GDP in Q3 2017 confirms that the economy is gradually recovering from its two most recent shocks (demonetisation and problems with implementing the new tax on goods and services). GDP grew by 6.3% year-on-year in Q3 2017 after posting weaker figures for the first and second quarters (6.1% in Q1 and 5.7% in Q2).

Mexico and Russia, two very different interpretations of slowing GDP growth in Q3 2017. In Mexico, an atypical Q3 figure does not alter the overall image of an economy withstanding the Fed’s monetary normalisation, the NAFTA renegotiations and the uncertainty caused by upcoming presidential elections. On the other hand, the underlying sensation in Russia is one of fragility, not least because the economy is still suffering from continued international sanctions. Looking at the trends in more detail, the Russian economy grew by 1.8% year-on-year after an abnormally high 2.5% year-on-year figure posted in Q2 2017. Although the breakdown by components is not yet available, indicators suggest the main reason for this slowdown has been the trend in the industrial sector (and particularly oil extraction). Mexico’s GDP fell by 0.3% quarter-on-quarter in Q3 (+1.5% year-on-year) after growing by 0.3% (1.9% year-on-year) in Q2. In this case the component breakdown reveals the main culprit for this slowdown was the secondary sector (principally mining, including oil extraction), particularly affected by the effects of Hurricane Harvey and, to a lesser extent, by the impact of the two September earthquakes. However, reconstruction work is expected to help growth to recover in Q4. 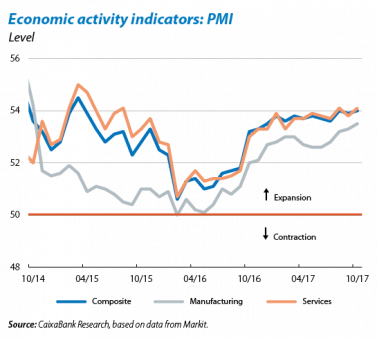 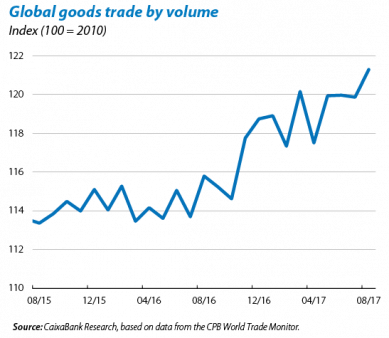 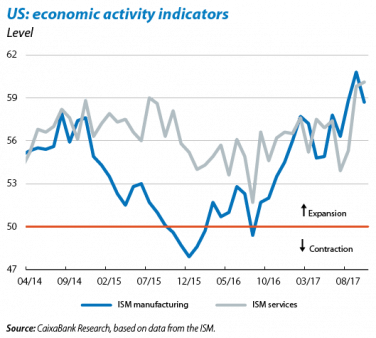 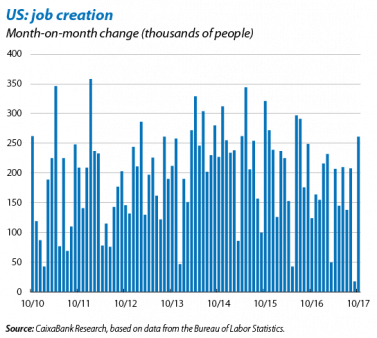 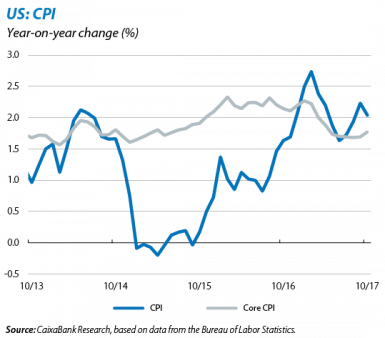 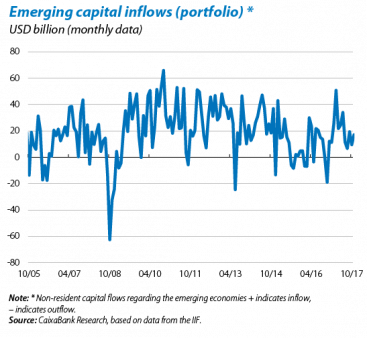 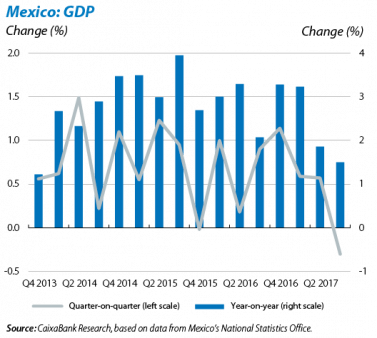