Economic activity set to improve in 2017

The world economy will speed up in 2017. GDP growth will reach 3.4% in 2017, slightly higher than 2016’s figure of 3.1%, due to improvements both in the advanced and the emerging economies. This growth is supported by several factors. For instance, the continued accommodative monetary conditions in the advanced countries in spite of the US Fed normalizing, which translated into another interest rate hike at its last meeting in March. Another encouraging factor is the moderate recovery in oil prices as this very gradual upswing will help oil exporters without harming importers in excess. Nonetheless, weak crude oil prices over the past few weeks, due to dynamic unconventional oil production (shale), suggest downside risks for this scenario.

Uncertainty is still high. There are political risks on both sides of the Atlantic. In the Netherlands, the victory by the incumbent Prime Minister, Mark Rutte, against the right-wing populist candidate, Geert Wilders, helped to ease uncertainty in Europe. In the US, the Trump Administration had to withdraw its proposal to repeal part of Obamacare as it lacked support from its own party. At a more global level, the G20 failed to reach a unanimous endorsement in favour of free trade and against protectionism.

Sentiment and economic activity indicators continue to point to considerable growth, albeit the former more than the latter. In March the Conference Board Consumer Confidence index rose to 125.6 points, its highest in the past 16 years. The ISM business sentiment index for manufacturing reached 57.7 points (the highest in the past two years) while the services index stood at 57.6 points, comfortably in the expansionary zone (above the 50 point threshold). Economic activity indicators also continued post increases, substantial in general but less dynamic than the sentiment indicators. February saw growth in retail sales and personal expenditure consumption (in real terms) but less than in previous months. The industrial production index remained unchanged from the previous month.

The Fed raises the federal funds rate, encouraged by upward inflation and a labour market indicating a mature economic cycle. At its March meeting the Fed decided to raise the federal funds rate by 25 bp to 0.75-1.00% given the institution’s confidence in the US economy. 235,000 jobs were created in February, a substantial figure since the US economy is now close to full employment. Unemployment remained almost stable at 4.7% while wages rose by a significant 2.8% year-on-year. Inflation continued its rise to 2.7%, 0.2 pp higher than January’s figure. Core inflation (without food or energy) hovered around 2.2%, 0.1 pp lower than in January. The year-on-year change in the core price index for personal consumption expenditures, the Fed’s benchmark price index, remained stable in January (at 1.7%). The continued rise in headline inflation and stabilization of core inflation around 2% certainly support another interest rate hike. But this hike does not represent any shift in the Fed’s stance, which is still planning two further hikes in 2017 and three in 2018 (as already announced at the end of 2016 and in line with the CaixaBank Research scenario). A very gradual normalization, since in the last four cycles of hikes the federal funds rate was raised by close to 1.7 pp per year on average (see the Focus «A federal funds rate hike: this time is different» in MR12/2015).

Uncertain figure for Q1 2017 GDP. After six years of expansion, the US economy is enjoying significant growth rates of around 2%, supported by solid private consumption, a healthy real estate sector and more dynamic corporate investment. The CaixaBank Research scenario predicts that fiscal policy will also support economic growth in the final part of 2017 and throughout 2018. However, in the short term, Q1 GDP growth might be slightly less than expected. Although the momentum suggested by sentiment and economic activity indicators is good, the BEA (the US statistics office that produces the country’s accounts data) tends to underestimate the GDP growth rate for Q1 and overestimate this figure for the other quarters due to seasonal effects. This problem is well-known but the BEA itself was not able to correct it in its annual revision of the historical series last summer. Consequently, a GDP flash estimate of between 1 and 1.5 pp below the forecast (in annualized quarter-on-quarter terms) cannot be ruled out. The forecast model used by the Federal Reserve of Atlanta, the GDPNow, which tends to anticipate these sudden slowdowns, estimates a 1.0% growth annualized quarter-on-quarter, far below the 2.8% average of Q3-Q4 2016 and the 2.1% predicted by CaixaBank Research for Q1 2017.

High risks still hover over the macroeconomic situation. In the medium term, uncertainty regarding the Trump Administration’s policies and how much support they might receive from Congress is a risk affecting US economic prospects. This could be a downside or upside risk as the new President’s agenda includes both positive and negative elements for US growth. The shift towards protectionism and mass deportation of immigrants would be on the negative side. Positive elements would be the promise of significant fiscal stimulus which, in addition to tax cuts, might also include considerably more spending on infrastructures (see the Dossier «The US: to invest or not to invest, that is the question» in MR03/2017). In any case, the first budget proposal for the 2018 tax year presented by the new Administration was not very ambitious and relatively incomplete. There are therefore downside risks concerning the fiscal support expected for the end of 2017 and throughout 2018.

Emerging economic activity remains solid at the beginning of 2017. The aggregate activity indicator for emerging economies as a whole, produced by the IIF, rose in February from already high levels. This was supported by the widespread improvement in industrial production as well as the recovery in international manufacturing trade for these economies. Capital inflows continued after the substantial outflows triggered by Trump’s victory. According to the IIF’s daily portfolio flows tracker, during the week following the Fed’s last interest rate hike the emerging countries received the largest capital inflows since September 2013. The Fed’s insistence that its hikes will be very gradual was undoubtedly a relief for these flows.

China sets its growth target at 6.5%, confirming the scenario of a soft landing. At the National People’s Congress in March, the Chinese government announced a 6.5% growth target for 2017, slightly below the 6.7% of 2016 and in line with a «soft landing». The Asian giant is immersed in changing its production model, promoting domestic consumption and services ahead of investment and exports, specially so in manufactures. A shift that entails a slower but more balanced growth rate. Although the move from one paradigm to another is expected to be gentle, risks are still high as the environment is considerably imbalanced (high debt, overcapacity in some sectors and large degree of government intervention).

Brazil delays its exit from the recession. In Q4 2016, GDP fell by 0.9% quarter-on-quarter (–2.5% year-on-year), a larger decrease than expected. This figure confirms the difficulties faced by the country to overcome its recession, in particular due to persistently weak private consumption which has decreased in quarter-on-quarter terms for the last eight quarters. GDP fell by 3.6% in 2016 as a whole. Given Brazil’s weak economy, CaixaBank Research has lowered its GDP growth forecast for 2017 from 0.9% to 0.7%. One positive note is that inflation fell considerably due to the anti-inflationary effect of the real’s appreciation.

Turkey ends the year with surprisingly strong growth. In Q4 2016, GDP increased by 3.5% year-on-year, much more than expected. An acceleration in domestic demand lies behind this unexpected recovery in the Turkish economy (GDP had fallen by 1.3% year-on-year in Q3). In spite of this good finish to 2016, with 2.9% annual growth, economic activity is expected to slow down in 2017. This is due to political uncertainty (with a referendum on 16 April to validate the new Constitution that will considerably alter Turkey’s institutional framework), the country’s external vulnerabilities and also high inflation. 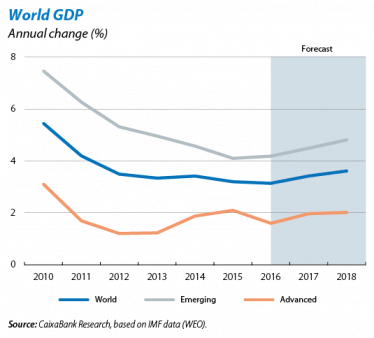 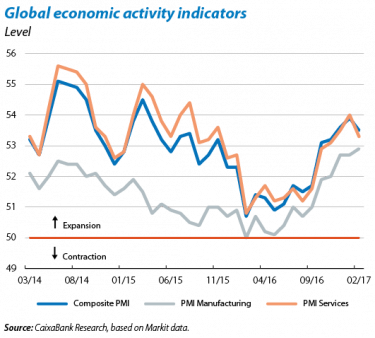 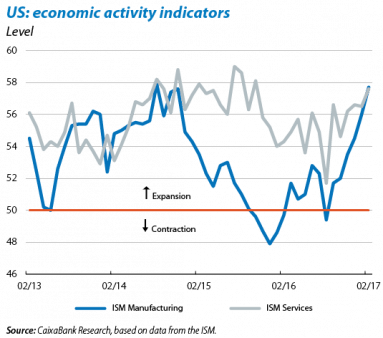 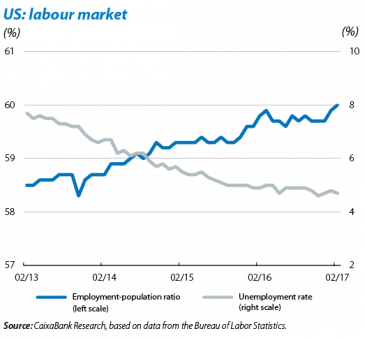 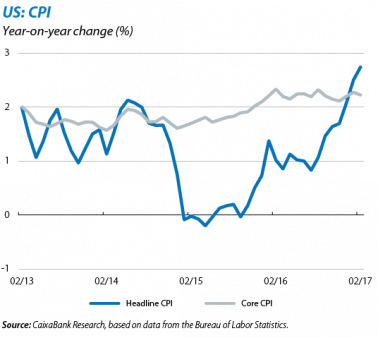 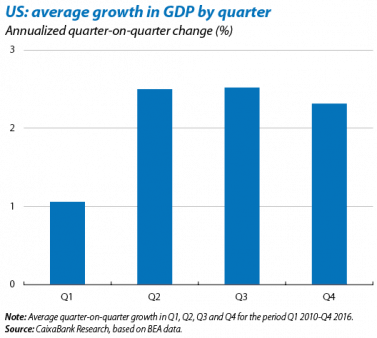 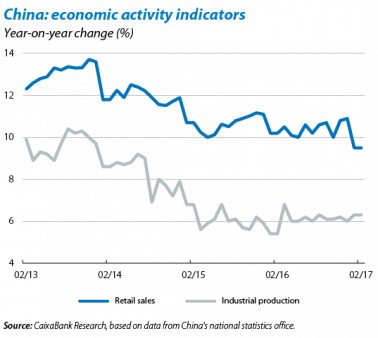 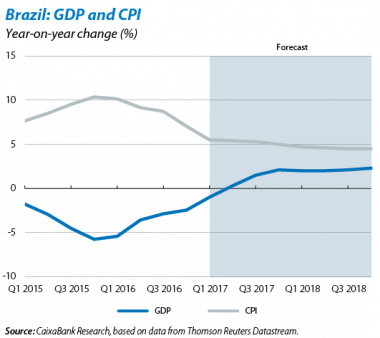 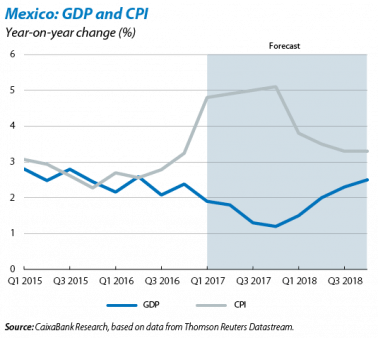