The euro area economy maintains its momentum in H2 2017. Q3 real GDP increased by 0.6% quarter-on-quarter, a similar pace to that of the first half of the year, as economic indicators were suggesting. Across countries, the figures for Spain (0.8% quarter-on-quarter) and France (0.5%) have also been published. Given the strong growth in economic activity, the IMF has raised its GDP growth forecasts for the euro area to 2.1% in 2017 and 1.9% in 2018 (+0.2 pp in both cases), slightly below CaixaBank Research forecasts (2.2% and 2.0%, respectively). According to the institution, this above-potential growth is being supported by strong domestic demand and an acceleration in exports. However, the IMF warned that, without structural reforms, growth in the euro area will gradually decline over the medium term. Especifically, the IMF pointed that potential growth remains moderate due  to weak productivity, demographic factors and high public and private debt. In the United Kingdom, Q3 GDP figure was also released. The economy grew by 0.4% quarter-on-quarter (0.3% in the previous quarter), relatively in line with analysts’ expectations. In the political arena, the Austrian conservative party (ÖVP) won the country’s general election held on 15th October, and the far right party (FPO) gained more support. In fact, these two parties will probably form a coalition government. The resulting coalition is expected to implement an agenda that will help to boost the country’s growth and not interfere with Europe’s reformist agenda. However, tensions may arise within the EU in relation to migratory policy. In Germany, after the general election of 24th September, Angela Merkel’s centre-right party (CDU) has embarked on negotiations to form a coalition government with the liberals (FDP) and green party. Nevertheless, discussions are likely to be complicated given the marked differences in some policies. Lastly, Italy finally passed its new electoral law, known as Rosalletum, which combines direct representation (36% of the seats) with proportional representation (the remaining 64%). This reform paves the way for elections to take place in early 2018 and is expected to favour the traditional parties over populist movements since the former are more willing to form coalitions.

Economic activity indicators point to a similar growth rate in the last quarter of the year. The first indicators available for Q4 2017 suggest that the euro area will continue to grow at a strong pace. The composite business sentiment index (PMI) for the euro area as a whole stood at 55.9 points in October, a similar figure to that of Q3 (56.0) and clearly in the expansionary zone (above 50 points). Also, the Economic Sentiment Index (ESI) reached 114 points in October, its highest level since 2001. Across countries, France performed particularly well with a composite PMI that reached 57.5 points in October, the highest level since May 2011. In Germany, while the index fell below the Q3 average (56.0) the IFO business sentiment indicator once again reached an historical high.

Household consumption continues to drive economic growth. This can be seen in the euro area’s retail sales figures, which were up by 1.9% year-on-year in August, below the previous month but still above the 1.4% average for 2016. The consumer confidence index also rose to –1.0 points, its highest level since May 2007. Private consumption is likely to remain firm over the coming months, supported by the improvements in the labour market  and low interest rates.

Euro area inflation is gradually getting back to normal as economic activity grows. Euro area headline inflation, as measured by the harmonised index of consumer prices (HICP), stood at 1.4% in October (0.1 pp lower than the previous month) due to the decline in the energy component. Core inflation, which excludes data for the volatile components (energy and unprocessed food), fell to 1.1%, 0.2 pp below the previous month’s figure. We expect core inflation, indicative of medium-term inflationary trends, to continue to recover gradually over the coming months as a result of the robust economic activity and improvements in the labour market.

Financial conditions remain accommodative and support growth in domestic demand. The ECB’s bank lending survey for Q3 2017 shows that loan demand increased across all categories, supported by the low interest rate environment, among other factors. According to this survey, credit standards on loans to households eased further, both for consumer credit and house purchase. Companies also continued to benefit from easier loan  approval standards than in previous quarters. For the fourth quarter, financial institutions expect demand for loans to continue to rise while credit standards for loans to households to ease further. All this suggests that financial conditions will go on supporting growth in domestic demand.

Euro area public debt continues to fall gradually. While the euro area’s average public deficit stood at 1.2% of GDP in Q2 2017, 0.3 pp below the figure for the same period in 2016, public debt remained closed to 90% of GDP. In Q2 2017, public debt stood at 89.1% of GDP, almost 0.2 pp below the Q2 2016 level (90.8%). However, this gradual reduction in public debt hides some very different situations at a national level. Public debt has fallen considerably (by 0.3 pp of GDP or more) in Greece, the Netherlands, Germany, Austria and Belgium whereas it has remained stable or even increased in other countries, such as Italy, Portugal and France. As public debt is high in this second group, it is important for them to bring it down to a more sustainable level, especially while the wind is in their favour.

The Portuguese economy remains dynamic. After growing 3.0% year-on-year in Q2 2017, indicators available to date point to economic activity maintaining its momentum in the second half of the year. The Bank of Portugal’s coincident indicator for economic activity, which summarises the trend of Portugal’s high frequency indicators, rose again in September (+3.9% year-on-year), thereby continuing the upward trend that started in 2016. October’s Economic Sentiment Index (ESI) reached 114.4 points, a level above the average for the first half of the year (111.5 points). The Bank of Portugal’s coincident indicator for private consumption rose by 2.6% year-on-year in September, a similar rate to that of the first half of the year, while consumer confidence remains at historically high levels. Overall, indicators point to a favourable economic outlook. Given this, the Bank of Portugal, in its October’s Economic Bulletin, kept its GDP growth forecasts for 2017 (2.5%) and 2018 (2.0%) unchanged.

Portugal’s current account remains positive. The current account surplus (cumulative over 12 months) totalled EUR 980 million in August, a higher figure than the EUR 787 million posted in August 2016 and equivalent to 0.5% of GDP. Regarding its composition, this improvement was due to a larger services surplus and smaller income deficit, both of which offset a larger deficit in goods. This decline can be explained by the increase in energy imports (resulting from higher oil prices) and in intermediate and capital goods (as investment picks up).

The favourable economic situation can also be seen in the trend for loans. In August, new loans granted to households for house purchases continued the upward trend that started in 2015, and grew by 39.2% year-on-year YTD, reflecting the recovery in real estate demand. New loans for consumer purchases also continued to grow strongly in spite of a slowdown in the rate (7.6% year-on-year). New loans granted to both small and large firms were still affected by the deleveraging carried out by the private sector. The debt of Portuguese non-financial firms has fallen considerably since the peak reached in 2013, although it remains high (111.4% of GDP in Q1 2017) and above the euro area average (104.2%). 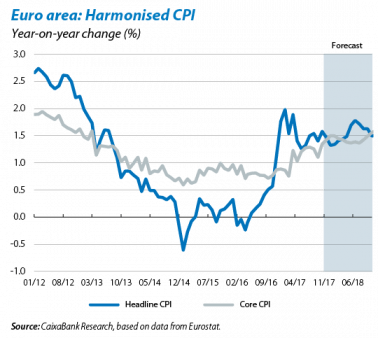 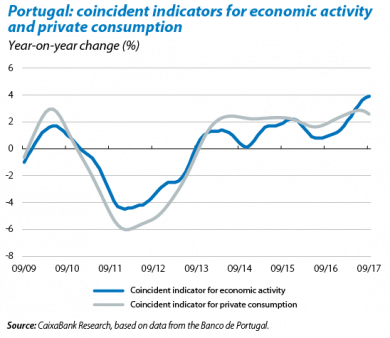 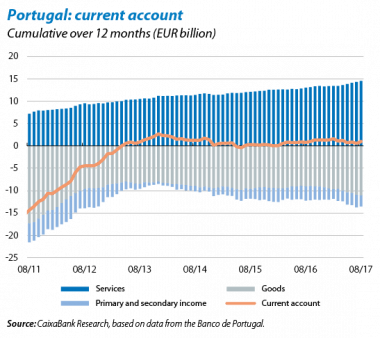 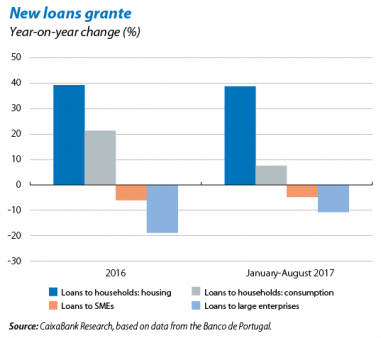