The effects of Brexit in the euro area are contained

The scenario continues of a gradual recovery in the euro area although the risks are still high. Brexit has occurred within a relatively favourable economic context for the euro area with growth that, although not brilliant, is gradually consolidating at moderate levels. Household consumption, spurred on by the measures taken by the ECB, has not been affected by the temporary increase in uncertainty and remains one of the pillars of the recovery. That is why the reduction in the forecasts made by CaixaBank Research, and by most international bodies, has been very moderate. The IMF, for example, has only reduced its growth forecasts for 2017 by a few tenths of a percentage point and has actually raised its 2016 forecast because the figures from the first half of the year have been better than expected. Nevertheless, and as described in the Focus «Post-Brexit uncertainty and its impact on economic growth» in this Monthly Report, the effect of Brexit will certainly be significant in the United Kingdom.

The recovery continued in Q2 at different speeds. The pace of growth of GDP in the euro area just before Brexit was 0.3% quarter-on-quarter, a rate in line with expectations and similar to that of the last three quarters. However, and as tends to be the case now, the different countries in the euro area advanced at different rates. Spain still stands out positively, maintaining a strong rate of growth in the last three quarters, as well as Germany, but Portugal, France and Italy are still lagging behind. Although to differing degrees, in Q2 exports contributed positively to growth in both Germany and France while domestic demand made a negative contribution due to a temporary dip in investment and stock. We predict that, in the coming quarters, domestic demand will regain its key role as support for growth in both countries. The UK’s GDP grew by 0.6% in Q2, boosted by the good performance of domestic demand, a support which the British economy is unlikely to be able to count on in the next few quarters due to the uncertainty generated by Brexit.

The post-Brexit figures point to the euro area’s rate of growth continuing in the second half of the year. The composite PMI for the euro area reached 53.3 points in August, its highest level in the last seven months, while the economic sentiment index fell slightly to 103.5 points in the same month, albeit still at levels similar to those of the first half of the year. The upswing in France’s PMI should be noted, up to 51.6 points (50.1 in July), as well as its economic sentiment index, up to 100.9 points (100.1 in July). Both indicators are now moving away from the recessionary zone which the economy had approached in the last few months and are at levels more in line with the advances which the French economy has posted and is very likely to continue posting: positive but modest rates of growth. In the case of the United Kingdom, after Brexit the composite PMI fell to 47.7 points in July (52.4 in June), in the zone of contracting activity. This reflects the negative impact of the increase in uncertainty regarding the British economy.

Household consumption continues to advance at a firm rate. Retail sales rose by 1.6% year-on-year in June, a rate similar to that of the previous two months (average growth of 1.5% in Q2). Although the trend over the last few quarters has clearly been downwards, the rate of growth has remained above the historical average of 0.7%, so private consumption is still one of the main supports for the economic recovery. The data available for Q3 continue to be encouraging. For example, the consumer confidence index stood at –8.2 points in July and August on average, levels similar to the first two quarters of the year. Unemployment held steady at 10.1% in July, 0.7 pps below the level one year ago.

Inflation continues to be positive. Both in July and August, inflation held steady at 0.2% thanks to a smaller drop in its energy component and the boost provided by food prices. It posted its third consecutive month in positive terrain since January and left behind the negative rates from the first half of the year. Over the coming months we expect inflation to continue its gradual recovery with the advance made by activity and the disappearance of the effect from the oil price slump.

The Bank of England reacts to Brexit in the UK. The trend for the pound sterling is one of the indicators that best show the impact of the uncertainty generated by Brexit, depreciating by more than 10% against the dollar and the euro. Given this scenario, the reaction by the Bank of England was quick and categorical, announcing a broad package of stimulus measures. Specifically, it cut the benchmark interest rate by 25 bps to 0.25% (and opened the door to further cuts over the coming months), expanded its sovereign bond purchase programme by 60 billion pounds for six months, and launched a corporate bond purchase programme totalling 10 billion pounds for one year and a half. It also set up a new funding facility for the banking sector of 100 billion pounds at the official interest rate to encourage new loans and alleviate the unwelcome effects on the banking sector of an environment of ultra-low interest rates (a similar instrument to the scheme created by the ECB in March). Moreover, it considerably adjusted its macroeconomic forecast for the United Kingdom. The Bank of England now predicts 0.8% growth in 2017 and 1.8% in 2018, considerably lower figures than the forecast before Brexit (2.3% for both years).

Political risks remain high in the EU. Over the coming quarters, the process for the UK to leave the EU will gradually become more defined. One of the key events in the short term in which we will start to glimpse the tone to be taken by negotiations is the summit occurring in mid-September among the different EU countries and which, for the first time, the UK will not attend. At present the bulk of the evidence available suggests that the packed electoral calendar over the coming quarters at a European level will put these negotiations on the backburner.

The solvency of European banks has improved although Italian banking is still a cause for concern. The results of the stress tests carried out by the EBA and ECB have shown that the sector now enjoys a considerable degree of resilience. At the end of 2015 European banks had a fully-loaded CET1 ratio of 12.6%, a much more comfortable situation than in previous years. The capital ratio in the stress test’s adverse scenario was also at a positive 9.2%. However, the case of Italian banking sector requires attention given the large proportion of doubtful loans on the balance sheets of some of its banks. Specifically, in an adverse scenario such as the one assumed in the stress test, the capital ratio would fall by almost 4 pps in gross terms. But there are notable differences between banks. The most extreme case is that of Monte dei Paschi di Siena, which would suffer a drop in its capital ratio of up to –2.4%. The reaction was rapid and a plan has already been announced to improve this situation, including the sale of a considerable package of doubtful loans and capital enlargement totalling 5 billion euros. This plan, and the one announced by other institutions, are not exempt from risks so there are still doubts regarding the speed and size of the adjustment to be carried out by Italy’s banks.

Portugal, a peripheral economy that is attracting attention. An increased perception of risk has once again put pressure on Portugal’s financing costs. On the one hand the Portuguese economy grew at a slower rate than expected by analysts on the whole (0.8% year-on-year in Q2 compared with the 1.2% forecast) but there is also concern regarding the solidity of the government and the state of the country’s finances. The EC concluded that Portugal did not take enough steps to correct its public deficit in 2014 and 2015. However, it did not impose a fine and relaxed the deficit adjustment to be carried out over the next few years (although, in order to achieve this, an additional budgetary adjustment will still have to be made). Lastly, analysts are also concerned about Portuguese banks and especially the situation of Caixa Geral de Depósitos. Its recapitalisation plan was approved in August, dependent on cost cuts, changes in corporate governance and reinforcement of its management team. Given this situation, the ratings agency DBRS (the only one that still rates Portuguese debt as investment grade) stated that, although its outlook was still «stable», it was concerned about the country’s situation and might revise its rating come October. 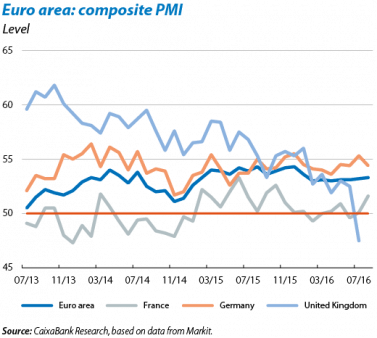 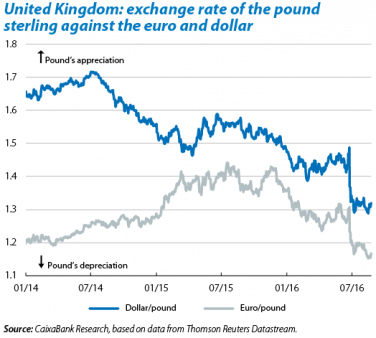 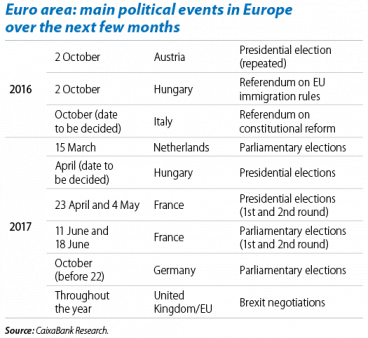 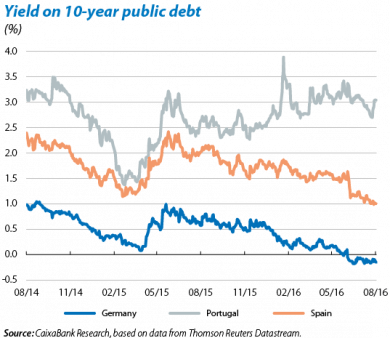