Markets remain agitated. The tightening of financial conditions in the US is gaining importance in the global macrofinancial scenario. In May, it penalised the markets of emerging economies, which suffered major setbacks in their stock markets and depreciations of their currencies. The advanced economies, on the other hand, began on a more positive note, with moderate gains in the stock markets and relatively stable interest rates, although volatility also prevailed in the second half of the month. In the US, interest rates rose significantly, only for the movement to be reversed in a matter of days, ending up at levels below those of the end of April. Europe, meanwhile, suffered an episode of risk aversion caused by uncertainty over the formation of a government in Italy. German debt acted as a safe-haven asset and its 10-year interest rate fell by over 20 bps, while peripheral risk premiums rose sharply. With this increased financial instability in the background, in June, monetary policy will return to the scene at the hand of the Fed and the ECB. These institutions will have to continue to balance the need to withdraw the monetary stimulus (due to the economy’s positive tone and the risk of accumulating financial imbalances in the medium term) with the importance of doing so at a sufficiently gradual pace so as to keep volatility contained.

Emerging financial markets digest the tightening of global financial conditions. For the second consecutive month, prices in the financial markets of the emerging economies were penalised by the consolidation of an environment of higher interest rates in the US. On the one hand, in foreign exchange markets, the dollar strengthened and virtually all emerging currencies depreciated sharply, losing the progress made since January 2018 (in fact, among the major currencies, only those of Colombia, Thailand, China and Malaysia remain up in the current year to date, compared to 18 currencies just two months ago). On the other hand, emerging stock markets also suffered, and most indices ended the month with major losses (the MSCI index for all emerging markets fell more than 3%). Across regions, Latin America suffered the most and its MSCI index lost 14.3%, particularly dragged down by the 7.5% decline in the Mexican stock market. The MSCI index for all the stock markets of the emerging Asian economies, meanwhile, registered losses of around 1.5%.

Some emerging economies suffer more than others. In this context of a certain weakness in the stock prices of the emerging economies, Argentina and Turkey were particularly affected. In Argentina, the peso suffered a depreciation of nearly 17%, despite the defence measures attempted by the central bank with two hikes in the reference rate, the first from 27.25% to 30.25% at the end of April and the second up to 40% in early May. The Government ended up requesting financial aid from the International Monetary Fund, and the month ended with the fall of the peso stabilising and a certain recovery in the Argentine stock market (the Merval index, which dropped as much as 11% at one point, ended the month with a loss of 4.8%). In Turkey, meanwhile, the lira depreciated more than 10% against the US dollar, while the Istanbul stock market closed down by nearly 3% after having fallen by almost 6% at the beginning of the month. Thus, the Argentine peso and the Turkish lira are the two emerging currencies that have suffered the most so far this year, with depreciations of 25.4% and 17.6%, respectively. This reflects both the major macroeconomic imbalances that the two economies have accumulated and the extent of investors’ doubts regarding the ability of their respective governments to correct the situation.

North American markets return to a normal pace. In contrast to emerging markets, in May the US stock market performed well and showed greater strength, despite the higher interest rates. That said, the month was characterised by two distinct phases. In the first half of the month, the main US stock market indices (S&P 500, Dow Jones and Nasdaq) amassed sustained growth, comfortably above 3%. However, in the second half, sovereign interest rates suffered a spike in volatility. In just four days, the 10-year yield saw a 17-bp surge (up to 3.12%, a figure not seen since the end of 2013), which was then reversed with practically the same magnitude and speed with which it had occurred (in fact, the yield ended up below the levels of the end of April). In this second phase, the US stock markets suffered from the volatility of the fixed-income market and were erratic in the remaining sessions, although they managed to end the month up on the whole.

Europe is held back by an episode of risk aversion. On the back of the positive mood in US stock markets, during the first part of the month the main European stock market indices performed positively and registered growth rates above 2% in Spain and France, and close to 5% in Germany. However, this encouraging performance ended abruptly in the second half of the month, when uncertainty about the formation of a government in Italy caused a sharp spike in risk aversion. The Italian risk premium surged by 170 points, reaching 300 bps (a level not seen since the sovereign debt crisis in 2012), before ending the month at 245 bps. This effect spilled over to the risk premiums of the surrounding states (Spain’s risk premium rose from 70 bps to 136 bps and ended the month at 116 bps, while the Portuguese risk premium went from 110 bps to 193 bps and ended the month at 164 bps). German sovereign debt, meanwhile, acted as a safe-haven asset and its 10-year yield fell by almost 40 bps, although it regained some ground in the last few days of the month. throughout this episode, stock markets suffered significant losses, which were more pronounced in peripheral countries (with declines of over 7%) than in core economies. In the month as a whole, European stock markets closed up with minimal losses in Germany (DAX –0.1%), and larger losses in France (CAC –2.2%), Spain (Ibex 35 –5.2%) and Italy (MIB –9.2%). Finally, in foreign exchange markets, the euro also suffered from the risk aversion episode: after having begun the month at around 1.20 US dollars per euro, it depreciated to 1.16 dollars at the end of the month.

Central banks send out messages of confidence in the economy in this context of financial volatility. In particular, in the US, the May meeting of the Federal Open Market Committee took place without any changes to the reference rates, but with an optimistic view of economic activity and inflation. This reinforced expectations of a new rate hike in June (which is fully priced in both by analysts and investors). In the euro area, the ECB also sent messages of continuity and was optimistic about the outlook for economic activity. However, members of the ECB also emphasised the importance of understanding the causes behind the moderation of economic activity indicators in the euro area so far this year. As such, they indicated that the ECB will focus its June meeting on undertaking a comprehensive review of the economic situation, before announcing the redesigned monetary policy for the last part of the year.

Crude oil prices seesaw. Just like most financial assets, in May the price of a barrel of Brent oil was characterised by two distinct phases. In the first half of the month, oil prices maintained their upward momentum of recent months and exceeded 80 dollars per barrel. This price increase was supported not only by the structural factors discussed in previous reports (as a reminder, the greater strength in global demand and OPEC’s clear commitment to production cuts), but also by the reintroduction of US sanctions on Iran. This factor could not only affect the global supply of oil (albeit to a limited extent, given that Russia and Saudi Arabia can easily compensate for Iran’s lower production), but it could also increase the risk of geopolitical instability in the region. However, in the second half of the month, the march of the oil price was slowed by the surge in financial volatility and the price of Brent oil dropped down to 77.6 dollars per barrel. 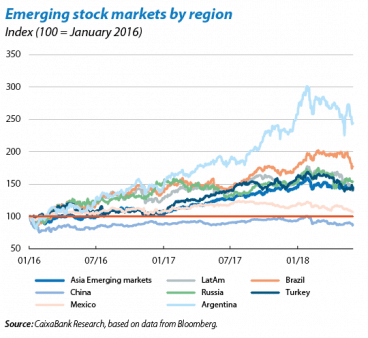 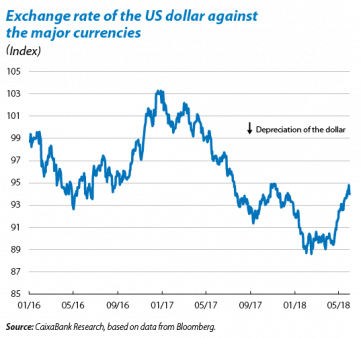 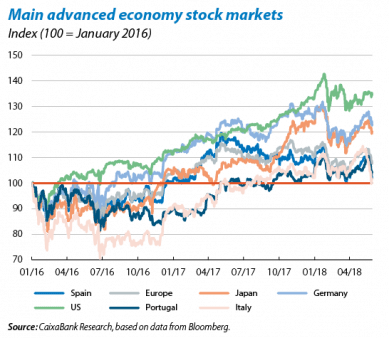 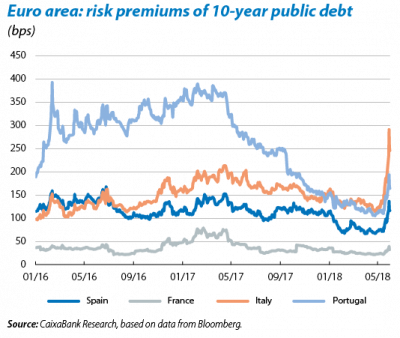