In the euro area, GDP growth proved to be a disappointment in Q3 2018

Slight downward revision of global growth forecasts. This revision is based on the slight moderation of global activity indicators. The global composite purchasing manager index (PMI), for instance, remains well within expansionary territory (above 50 points) but declined for the third consecutive month, down to 52.8 points in September. This setback has occurred both in the aggregate for emerging economies and for advanced economies. The scenario by CaixaBank Research has been adjusted to reflect this moderation, with a slight downward revision (1 decimal point) in the global growth figures for this year and next, although the forecasts remain strong (3.7% in 2018 and 3.6% in 2019). The IMF also reduced its global growth forecasts in the recent update of its World Economic Outlook report (down to 3.7% for 2018 and 2019) and maintained a balance of downside risks. The IMF’s review largely reflects a lower expected growth among the emerging economies and is the result of two opposing trends: while the recovery of the price of oil justifies improving the outlook for energy exporters, other emerging economies are going to see their future growth suffer due to the escalating global trade tensions (the IMF explicitly mentions China and India). Besides these general trends, there are certain emerging economies (such as Argentina, Turkey and Iran) that are exhibiting idiosyncratic weaknesses, in addition to suffering from the combination of global trends that are hindering growth (tightening of global financial conditions, geopolitical tensions and effects of the trade war).

The downside risks remain present. In the sphere of trade, despite the agreement reached in recent weeks between the US, Mexico and Canada to reform the trade treaty between the three countries (previously known as NAFTA, and now USMCA), the trade tensions between the US and China remain ever present. Although we do not believe that the escalation of tariffs between the two countries will lead to a fully-fledged trade war on a global scale, the risks have increased considerably in recent months. In this regard, the US midterm elections (on 6 November) could play an important role in how these tensions are to develop. If the Republicans come out stronger, Trump could see it as an endorsement of his trade policy and continue to impose tariffs. If, on the other hand, the Democrats recover the House of Representatives with a resounding election result, the president might choose to recalibrate his trade policy. Not in vain, 56% of Americans believe that free trade agreements have been positive for the country as a whole. Although this percentage is considerably lower among Republican voters (43%), it has tended to increase significantly in recent years (according to a survey by the Pew Research Center).

In Europe, geopolitical factors dominate the risk map. In particular, at the European Council meeting in mid-October, the United Kingdom and the EU were unable to reach an agreement on the United Kingdom’s departure, due to take place on 29 March next year. Such an agreement is a requirement for the transition agreement previously reached, according to which the United Kingdom will remain in the single market and the customs union until the end of 2020, to come into effect. Although we expect an exit agreement to eventually be reached, its formalisation is likely to be delayed more than would be desirable, since the process of ratifying the agreement in the United Kingdom is expected to prove difficult. Italy, meanwhile, has been the focus of attention over the past few weeks, due to the fact that its new public budget for 2019 represents a significant deviation from the target previously agreed with Brussels in May (increasing from a deficit of 0.8% of GDP to 2.4%). This change will make it difficult to correct Italy’s high levels of public debt (currently above 130% of GDP) and it is causing tensions with Brussels. In fact, the European Commission has already formally rejected this proposal, considering it a serious breach of the EU’s fiscal rules, and it has given Italy three weeks (until mid-November) to revise it.

The first economic sentiment indicators point towards a more moderate growth rate in the last quarter of the year. In particular, the composite PMI index for the whole of the euro area (which measures business sentiment) fell to 52.7 points in October. Although still in expansive territory, this is its lowest level in the past two years. The decline was supported by the (expected) slowdown in exports, in an environment of persistent trade tensions. The new regulations on vehicles may also have contributed to this lower figure. The consumer confidence index, meanwhile, rebounded slightly in October to –2.7 points, similar to the 2017 average (–2.5 points).

The economic activity indicators reflect a solid growth rate, but with signs of slowing down. The Bank of Portugal’s coincident indicator is following a gentle downward trend, but it remains at historically high levels and points towards a growth rate of around 2% over the next few quarters (slightly lower than the most recent figures registered). Thus, a slight slowdown in the economy is expected in the second half of the year, in particular due to a smaller contribution from the foreign sector (with the fading of several factors that had been supporting economic activity in the last years, such as the low oil price and strong growth among the country’s main trading partners). Nevertheless, domestic demand remains solid and there has been a positive trend in private and public consumption, as well as in investment. Private consumption will continue to benefit from the recovery in employment and disposable income thanks to the acceleration in wages (in the first semester, net wages increased by nearly 4.0%), while the trend in public consumption will be influenced by the proximity of the legislative elections (due to take place in October 2019). Finally, investment will continue to recover gradually, albeit possibly at a slower pace due to the moderation of global growth. On the whole, therefore, the outlook for the next few quarters remains positive for Portugal. That said, being a small open economy, the slowdown in global growth represents a downside risk looming on the horizon.

Unemployment continues to decline. The number of registered unemployed people decreased significantly in September (–17,5%) and remains close to its all-time lows. The unemployment rate in August, meanwhile, remained stable at 6.8% for the third consecutive month (–2.0 pps compared to August 2017). In any case, the number of unemployed people fell at a slightly slower rate than in previous months, which could indicate that the pace of recovery in the labour market is beginning to slow down.

Prices continue to grow at a moderate rate. In October, headline inflation stood at 1.1%, 0.3 pps below the figure for September, while core inflation fell to 0.5% (–0.3 pps compared to September). In the absence of the breakdown by component, all the indicators suggest that energy prices, driven up by the rise in oil prices over the past 12 months, continue to play a major role (in September, for which the breakdown by component is available, energy prices contributed +0.6 pps to a 1.4% increase in headline inflation).

The current account balance deteriorates. For the first time since 2015, the current account balance has been negative in cumulative terms over the past 12 months. In August, this balance was –425 million euros (–0.2% of GDP) and reflected the deterioration of the balances of goods and primary revenues. Nevertheless, some of the causes behind this deterioration are not necessarily negative. In particular, part of the deterioration of the balance of non-energy goods is due to the buoyancy of domestic investment, a component of GDP with a high import content and the growth of which, therefore, pushes imports upwards. In the balance of primary income, the deterioration is a result of Portugal receiving greater amounts of direct foreign investment, which causes an increase in income payments abroad. However, part of the deterioration is also the result of less positive dynamics, such as the rise in oil prices, which could continue to affect imports over the coming quarters. The balance of services, meanwhile, is the only component that continues to register a surplus, thanks to tourism, although it is beginning to show signs of slowing down.

Public accounts in positive territory. Based on data up to September, the general government has recorded a budget surplus of 1,338 million euros, equivalent to +0.9% of GDP. This positive trend has been favoured by the strong performance of the economy and the labour market, which have contributed to the growth in tax revenues and social contributions (based on data up to September, these two items account for more than 80% of the total growth in revenues). Expenditure, on the other hand, grew by 2.2% year-on-year. This is less than anticipated by the Government (4.5%), largely due to an effect caused by the composition of staff costs. Specifically, if we exclude from the calculation the extra Christmas payments for civil servants’ wages and pensioners’ benefits (the payment of which had been split into 12 monthly instalments in 2017), then the total expenditure up to September would show a 4.3% increase. In short, after correcting for these factors, the performance observed to date reinforces our deficit forecast for 2018 of –0.7% of GDP, and it is consistent with the Government’s estimate (for more details, see the Focus «Rapid correction of the budget deficit» in this Monthly Report).

Non-performing loans have declined significantly compared to the peaks of 2016. In Q2 2018, the NPL ratio stood at 11.7%, representing a reduction of 1.1 pps compared to Q1 2018 and of 6.2 pps compared to the peak recorded in Q2 2016. This substantial reduction in non-performing loans (NPLs) is due to the sale of portfolios of NPLs and reflects the considerable efforts made by the banking sector to clean up its balance sheets. The reduction in NPLs was particularly notable in the corporate sector, where the ratio fell from 23.9% in Q1 2018 to 22.3% in Q2, although it still remains high. Non-financial private sector lending, meanwhile, slowed down in September, mostly due to housing credit, which fell by 1.2% year-on-year in August, and credit to non-financial corporations, which registered a fall of 3.8% year-on-year. 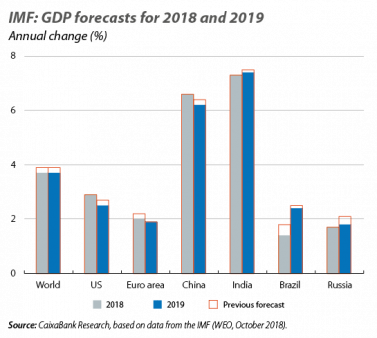 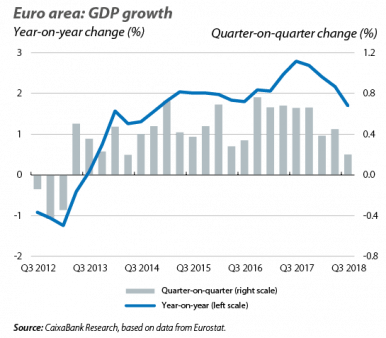 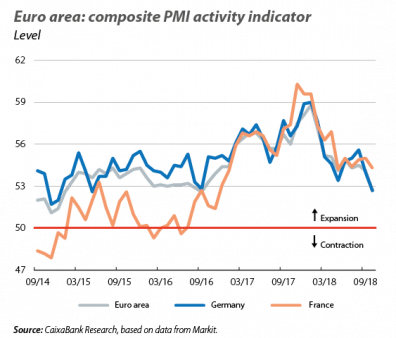 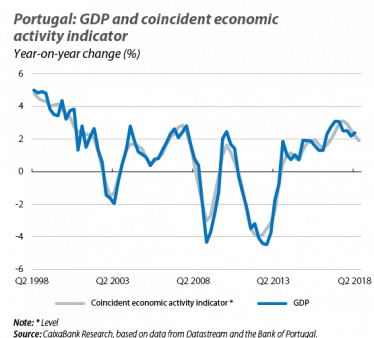 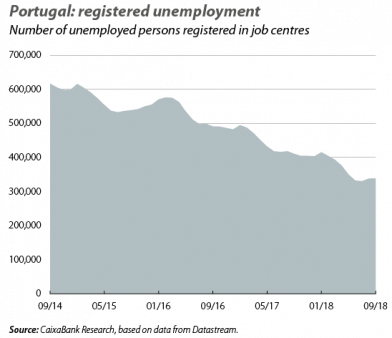 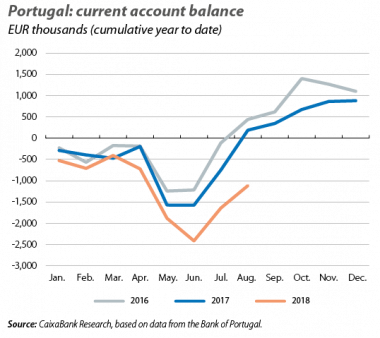 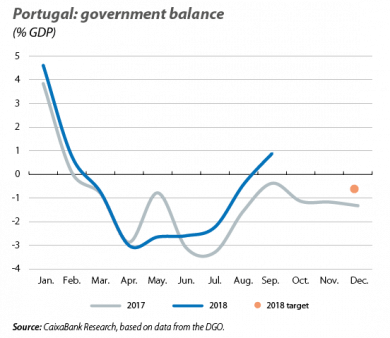 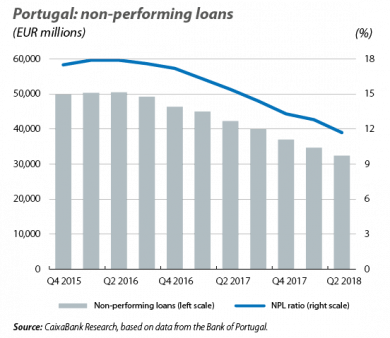