The euro area is still growing at a good pace

The solid economic figures posted for the first six months confirm economic activity is speeding up in the euro area. The recovery is occurring simultaneously across all the area’s countries, accompanied by improved confidence. Rising demand, supported by very favourable credit conditions, has created a good climate for investment, employment and, in short, economic growth. This can be seen in the ECB’s revised GDP growth figure for the euro area in 2017, from 1.9% to 2.2%, in line with the CaixaBank Research forecast. But there are still a lot of challenges ahead. After elections in France and Germany, the euro area has a window of opportunity to embark on far-reaching reforms, in both policy and institutional terms. This opportunity has been marred by the rise of the far-right in the German elections. Nevertheless, Merkel and Macron’s victories, together with a positive economic climate, should provide some leeway for reforms. In fact, Macron has embarked on a cycle of reforms with an already-approved labour market reform discussed in detail in the Focus « French labour reform: Emmanuel Macron’s soft revolution» in this Monthly Report. Across the channel, all eyes are on developments in the Brexit negotiations, which remain stuck on the issue of the UK’s payments to the EU for financial obligations acquired through its membership. In recent statements, and in an attempt to move negotiations forward, Theresa May has said the UK is willing to negotiate a transition deal with the country maintaining its status quo for approximately two years.

Domestic demand still drives Q2 euro area growth, contributing 1.9 pp to GDP growth out of a total of 2.3% year-on-year. In line with previous quarters, all subcomponents of demand have seen solid growth. Foreign demand posted a notable change in trend in its contribution to growth. After deducting points from GDP growth because of a sharp rise in import-intensive categories such as private consumption and investment, foreign demand now contributes 0.4 pp to GDP growth, both because of a faster rise in exports and slower rise in imports. Over the coming quarters we expect domestic demand to continue boosting GDP, supported by greater confidence and very favourable credit conditions.

Economic activity indicators point to euro area growth maintaining its momentum in Q3. After a slight drop in July and August, the composite business sentiment index (PMI) for the euro area as a whole picked up in September to 56.7 points, above the 56.1 points average of the first six months. The euro area’s Economic Sentiment Index (ESI) rose by 1.1 points in September to 113 points, its highest since summer 2007. Finally, the industrial production index recovered slightly in July, up by 0.1% month-on-month after a dip in June (0.6%).

Household consumption is still driving economic growth, supported by the labour market’s good performance, very favourable credit conditions and improved economic outlook. This can be seen in euro area retail sales figures which grew by 2.4% in the year to July, slightly below the 3.1% figure posted the previous month but far above the 1.4% average for 2016. The consumer confidence index also rose by 0.3 point to –1.2 points, its highest level since May 2007. Over the coming months, we expect the aforementioned factors to continue supporting household consumption.

The labour market continues to create jobs, supporting the economic recovery. Euro area employment increased 1.6% year-on-year in Q2, raising the total employment figure to 155.6 million, an all-time high. Although employment growth was widespread, there were notable year-on-year increases in Spain (2.8%) and Germany (1.5%). Wage costs also rose significantly in the area, up 2.0% year-on-year in Q2, 0.7 pp more than the previous quarter. Nevertheless, this increase is largely due to the contributions of Germany and Portugal, where wages grew, year-on-year, by 2.9% and 2.8%, respectively. Wage moderation continued in Italy and Spain, however, with year-on-year rates of 0.7% and 0.4%, respectively. This situation should not be seen as a source of concern. Stronger wage growth in Germany encourages the country’s households to consume, while wage moderation in Southern Europe’s two main countries makes their exports more competitive. All this helps to reduce imbalances in the euro area. Given the favourable economic outlook, we expect employment growth to remain solid and continue to support household consumption growth.

Prices continue to rise moderately. In September, the harmonised index of consumer prices (HICP) increased at the same rate as the previous month, 1.5%, with energy prices making the largest contribution to growth. Core inflation, which excludes data for the volatile components (energy and unprocessed food), remained stable at 1.3% for the third consecutive month. According to ECB forecasts, headline inflation will slow down slightly in 2018 due to base effects of rising oil prices during the first half of 2017, subsequently recovering in 2019 as a result of robust economic activity. Nevertheless, according to ECB projections, inflation in 2019 will remain below its medium-term target of below, but close to 2%.

Economic activity indicators suggest Portugal’s economic activity will continue to expand at a good pace in Q3. Portuguese GDP grew by 3.0% year-on-year in Q2. In quarter-on-quarter terms, however, growth was 0.3%, much lower than the Q1 rate (0.9%). Nevertheless, we should not reach any alarming conclusions based on a single figure, especially considering the historical volatility of Portugal’s GDP series. A review of Q3 economic indicators suggests economic activity remains solid. September’s Economic Sentiment Index (ESI) was up 2.4 points to 114.4 points, well above the Q1 average (110.4 points). Both industrial production and retail sales data were strong in July, with year-on-year growth of 5.2% (4.5% Q1 average) and 3.9% (3.0% Q1 average), respectively. In summary, although GDP grew less than expected, overall indicators point to a favourable economic outlook for the country. This can be seen in September’s update of the IMF’s forecasts for the Portuguese economy, which raised GDP growth for 2017 from 1.7% to 2.5%. The organisation approved of the government’s efforts to reduce the fiscal deficit and reinforce the banking sector.

The labour market continues to support economic growth. In Q2 2017, employment grew by 3.4% year-on-year (equivalent to 158,000 new jobs), the highest growth rate since the economic recovery began. This has been accompanied by a decline in the share of long-term unemployed workers, reaching 5.2% in Q2 2017, 0.8 pp below the previous quarter. It is also worth highlighting that growth, in yearly terms, of employees on permanent contracts has exceeded that of employees on temporary contracts for four months in a row.

The country’s good economic performance is helping to improve its public finances. The general government deficit stood at 1.4% of GDP (cumulative over 12 months), 0.2 pp less than that of the previous quarter and much lower than that of the same quarter the previous year (3.6%). This improvement is due to the simultaneous impact of a 0.3% rise in revenue and a 0.1% fall in expenditure compared with the previous quarter. Against the backdrop of favourable GDP growth prospects and improved public finances, the ratings agency Standard & Poor’s upgraded Portugal’s rating to «investment grade» (from BB+ to BBB–). As a result, Portugal’s risk premium has fallen considerably which, in turn, should boost public finances further. One source of risk regarding the deficit trend comes from Eurostat, which is studying the possibility of including the cost of recapitalising the Caixa Geral de Depósitos bank in Portugal’s public deficit figures. In this case, the 2017 deficit would increase by around 1.2% of GDP. However, this rise would be temporary and therefore not impact the downward trend of the past few years. 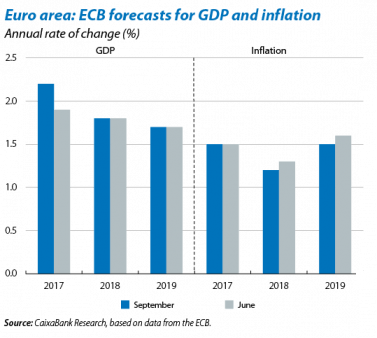 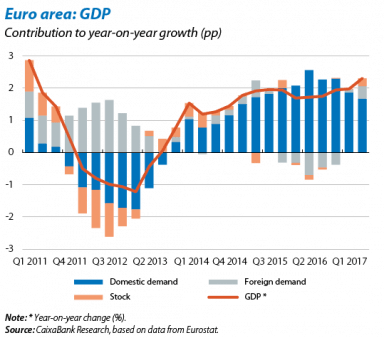 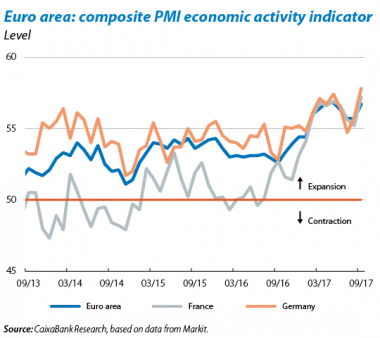 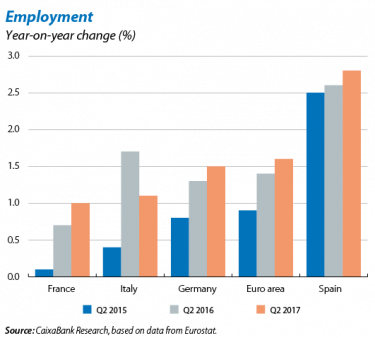 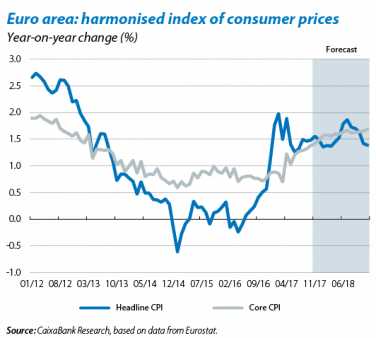 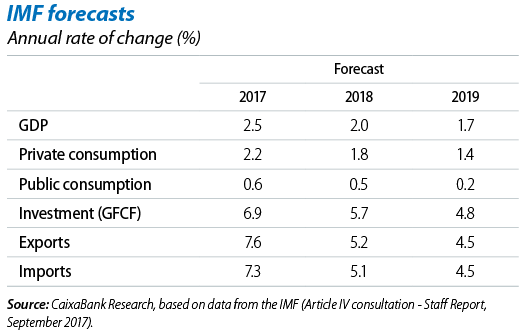 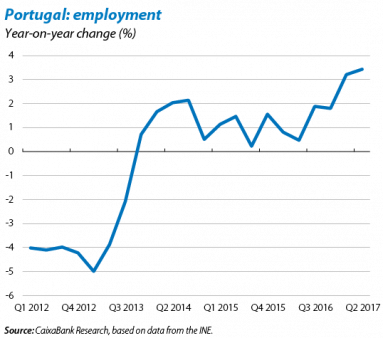