Europe, the main victim of the uncertainty shock

The uncertainty shock shows no sign of abating. Over the summer months, far from providing a respite, the main pockets of uncertainty of recent times have remained active: the trade tensions between the US and China have intensified, the EU’s political troubles (Italy, Brexit) have not been dispelled and the global geopolitical situation has been cause for alarm (notably the difficult circumstances in Hong Kong and Iran, among others). Furthermore, these dynamics have been compounded by volatility in financial markets and indicators which, generally speaking, have confirmed that the rate of economic activity is somewhat worse than a few months ago. This is a combination that has resulted in an intensification of doubts over the future path of global growth, and the risk of the latter being lower than expected has increased.

Escalation of trade tensions between the US and China. Among the open fronts mentioned above, the one with the biggest implications for the global economy is the increase in the trade skirmishes between the world’s two leading economies, which are trading tit for tat. On 1 August, just when negotiations appeared to be at a more constructive point, the US made a surprise announcement that it would apply a 10% tariff on 300 billion dollars of Chinese imports (which would partially come into force in September and fully in December). Shortly thereafter, China responded by applying various tariffs, ranging from 5% to 10% depending on the product, on 75 billion dollars of US imports. In addition, the Chinese giant allowed the renminbi to devaluate down to around 7 yuan per dollar. On 23 August, the US government announced a 5-pp increase (from 25% to 30%) on tariffs already in force on another 250 billion dollars of Chinese imports, making practically all US purchases from China now subject to tariffs that did not exist a year and a half ago. In short, although the two parties are expected to reach a basic agreement, probably in 2020, the uncertainty is already taking its toll and that hypothetical agreement is unlikely to recover the eroded confidence in full.

Expectations of lower future growth are beginning to spread. In this situation, most analysts and institutions have begun to revise their growth forecasts for 2019 and subsequent years downwards. A prime example of this is that, in July, the IMF once again reduced its global growth forecasts and reiterated the significant risks surrounding the global economy. Specifically, having grown by 3.6% in 2018, according to the Fund the global economy is expected to grow by 3.2% in 2019 and by 3.5% in 2020, both 1 decimal point lower than the figures included in its April forecasts. This downward revision was the result of growth in emerging economies being lower than predicted three months ago, the intensification of trade tensions, as well as the uncertainty surrounding Brexit and technological risks (with the various measures that the US could adopt in relation to Chinese companies and the multiple investigations underway on potential anti-competitive practices by some US technological giants). After the spike in uncertainty in August, these figures even appear somewhat optimistic. Accordingly, at CaixaBank Research we anticipate that growth will be 3.0% in 2019 and 3.2% in 2020, 2 decimal points lower than predicted in our previous Monthly Report.

Europe, the main victim of the uncertainty shock. While the main trade conflict is between the US and China, for the time being it is the European countries that, paradoxically, seem to be more affected by the increase in uncertainty. In Q2 2019, GDP rose by 0.2% quarter-on-quarter (1.1% year-on-year), a 0.2-pp slowdown compared to Q1. In addition, Germany’s GDP fell by 0.1% in quarter-on-quarter terms (+0.4% year-on-year) and the Bundesbank predicts another decline in Q3. In the rest of Europe, the tone was one of lower growth, albeit not negative. The performance of the economic activity indicators at the beginning of Q3 suggested growth for the quarter in line with the previous one, although the downside risks have intensified.

What lies behind the worse tone in Europe? The most likely explanation as to why the EU is performing differently to, say, the US (which is directly affected by the trade tensions) is Europe’s high sensitivity to changes in global confidence, as the region is more internationally integrated than the US. This is reflected in the estimates of the aforementioned article, which stated that the intensity of the so-called uncertainty channel was practically the same in the euro area as it was in the US and China. An additional factor that intensifies Europe’s growth problems is the uncertainty of a strictly political nature, particularly that which is affecting Italy (despite expectations of the formation of a new coalition government, doubts over its duration will not be easily appeased) and the United Kingdom. Despite these dynamics being of an idiosyncratic nature, they are probably also hindering economic sentiment in the rest of Europe.

British recession on the verge of Brexit. In Q2 2019, GDP fell by 0.2% quarter-on-quarter, representing a significant reversal of the 0.5% growth registered in Q1. In year-on-year terms, growth slowed to 1.2% (1.8% in Q1). The first fall in GDP should be interpreted in the context of Brexit, as it was largely a result of the reduction of stocks (the one-off accumulation of Q1 was partially reversed, in anticipation of what was then believed to be the impending departure from the EU) and the contraction of investment, affected by the prevailing uncertainty. The immediate outlook does not appear promising, as the likelihood of a no-deal Brexit has increased following the election of the new prime minister Boris Johnson, with his hard negotiating line both with the EU and internally (even so, we still believe that Article 50 of the EU Treaty will end up being extended).

The Portuguese economy stands up well to the external slowdown

Economic activity is growing at a steady rate. Portugal, like Spain, continues to perform well relative to the euro area’s slowdown in growth, as illustrated by the economic activity figures published over the course of the summer. In particular, in the face of the slowdown in GDP growth of the euro area (from 0.4% quarter-on-quarter in Q1 to 0.2% in Q2), Portugal’s GDP maintained a solid growth rate of 0.5% quarter-on-quarter (1.8% year-on-year) in the second quarter of the year (the same figures as in Q1). By components of demand, the growth was supported by household consumption and investment (although both experienced a slight slowdown), as well as by a smaller negative contribution from external demand. By sector, there continued to be a discordance between the positive performance of the services sector (with a 3.7% increase in turnover in June) and the difficulties experienced by industry (–8.0%). In fact, this contrast can be observed across the major advanced economies.  Construction, meanwhile, also performed well and in June the turnover of the sector grew by 2.8%. Furthermore, despite the deterioration in the external environment over the course of the summer discussed on the preceding pages of this Monthly Report, the latest indicators available for Portugal continue to indicate an encouraging trend in economic activity. In particular, in July the Bank of Portugal’s coincident economic activity indicator (which is closely correlated with GDP) stabilised at 2.0% year-on-year (2.0% on average in Q2), while the economic climate indicator also remained at levels similar to those registered in the previous two months. However, although the indicators point towards growth rates similar to those of the previous quarter in the short term, the intensification of global risks could restrict the buoyancy of the Portuguese economy.

The current account balance remains in deficit in June. In the aggregate of the past 12 months, the current-account deficit stood at 2,069 million euros in June. This is equivalent to 1.0% of GDP and contrasts with the slight surplus of 41.5 million registered in the same period last year. This deterioration was mainly due to the balance of goods, which saw its deficit expand by 3,264 million euros. The surplus in the services balance did not change, while that of the income balance reduced. In the first half of the year, exports of goods and services increased by 3.3% and imports grew by 7.3%. Tourism exports remain important for the external accounts (representing 8.3% of GDP), and in the first half of the year the number of tourists rose by 6.8% (4.8% in 2018). Finally, the capital balance registered a surplus of 1.0% of GDP. The net international investment position (NIIP), meanwhile, stood at –100.2% of GDP in the second quarter of the year (–205.9 billion euros) and net external debt fell to 87.3%.

The labour market continues to improve, but more slowly. In Q2 2019, employment increased by 0.9% year-on-year. This is an encouraging growth rate, albeit slower than the average for 2018 (2.3%). By sector, job creation was mostly concentrated in services (+81,500 people), while trade also played a major role (+25,800). This growth in employment was accompanied by a 0.4% increase in the labour force and a reduction in the unemployment rate down to 6.3% (–0.4 pps in the last 12 months). The average net monthly remuneration, meanwhile, stood at 911 euros per worker, which is 24 euros higher than in Q2 and provides continuity to the gradual recovery in wages.

Negative inflation in July and August. For the first time since 2015, headline inflation stood at negative levels in July (–0.3%) and August (–0.1%). This reflected both the fall in restaurant and hotel prices and the reduction in the VAT rate applied to electricity and natural gas. As such, inflation has shown a more moderate profile in 2019 to date. One factor that has contributed to this trend is some of the measures taken by the government, including extending the provision of free textbooks to more school years and reducing the prices of electricity, public transport and telecommunications.

The public accounts show improvement thanks to revenues. In July, the government balance stood at –0.4% of GDP (–445 million euros) in cumulative terms for the year to date, which represents a substantial improvement compared to the –2.3% of July 2018. This improvement is supported by a significant increase in revenues (6.5% year-on-year), which is well above that registered in expenditure (1.6%). The most notable increase is that of tax revenues (+6.1% year-on-year), which accounts for around 80% of the increase in total revenues. The contained growth in expenditure, meanwhile, was due to the fall in interest payments and the low level of execution in investment.

The stock of private sector lending continues to contract. In June, the total stock of private credit decreased by 1.3% year-on-year. This can be explained by the contraction of credit granted to non-financial corporations (–2.4% year-on-year; excluding sales of doubtful loans it would have increased by 2.6%) and of credit granted to households (–0.6%). In the household segment there was a contraction in the stock of credit granted for housing, which can be put down to repayments given that new lending continued to increase. On the other hand, consumer credit continued to show steady growth. The NPL ratio, meanwhile, fell in Q1 2019 down to 8.9%, a –0.5-pp decline compared to Q4 2018. This decrease was due to a 1,365 million-euro reduction in non-performing loans compared to the last quarter of 2018, driven in particular by the non-financial corporation segment. This improvement can be partly attributed to the significant activity in sales of non-performing loans, a trend that will continue in the second half of the year. 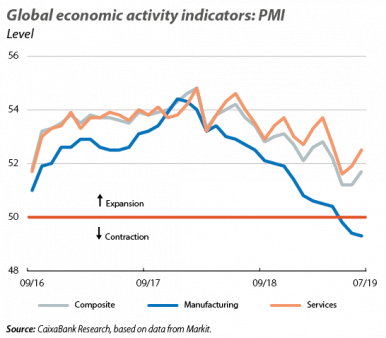 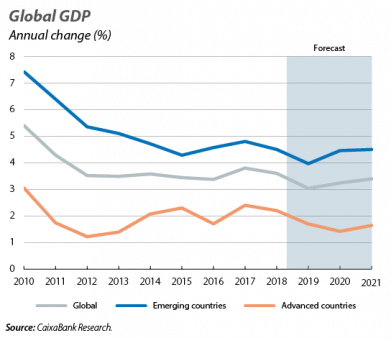 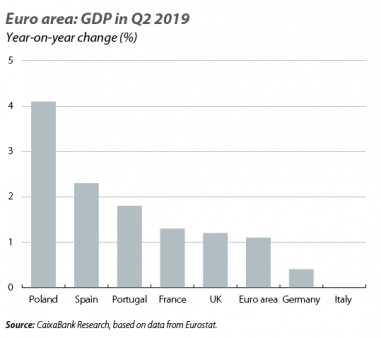 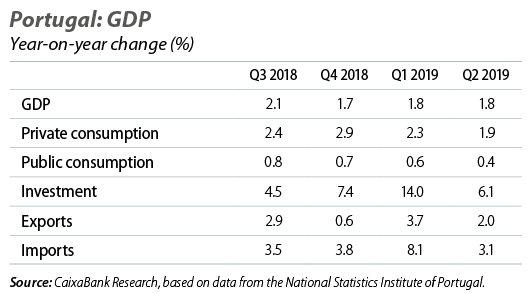 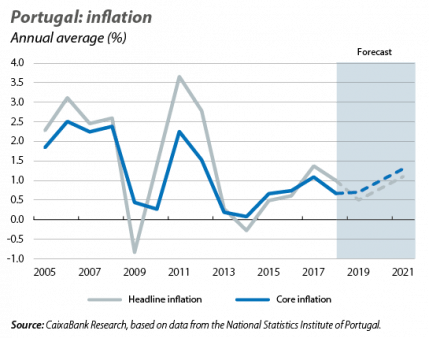