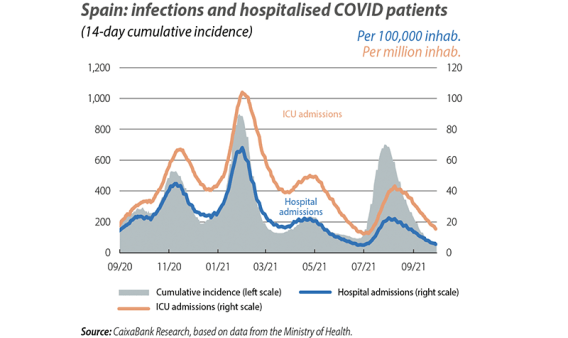 The favourable epidemiological developments have allowed the restrictions to be lifted, thus reducing the pandemic’s impact on economic activity

The data show a growing dissociation between infections and hospitalisations and deaths, as the percentage of the immunised population, now at 76.8%, has grown. The cumulative incidence continues to decline and now stands at a contained 59 infections per 100,000 inhabitants, compared to 276 a month ago; the percentage of hospital occupancy due to COVID patients has dropped to 2% at the end of September compared to 6% the previous month, while the number of weekly deaths per million inhabitants has dropped to 2.5 from the 7.5 at the end of August. 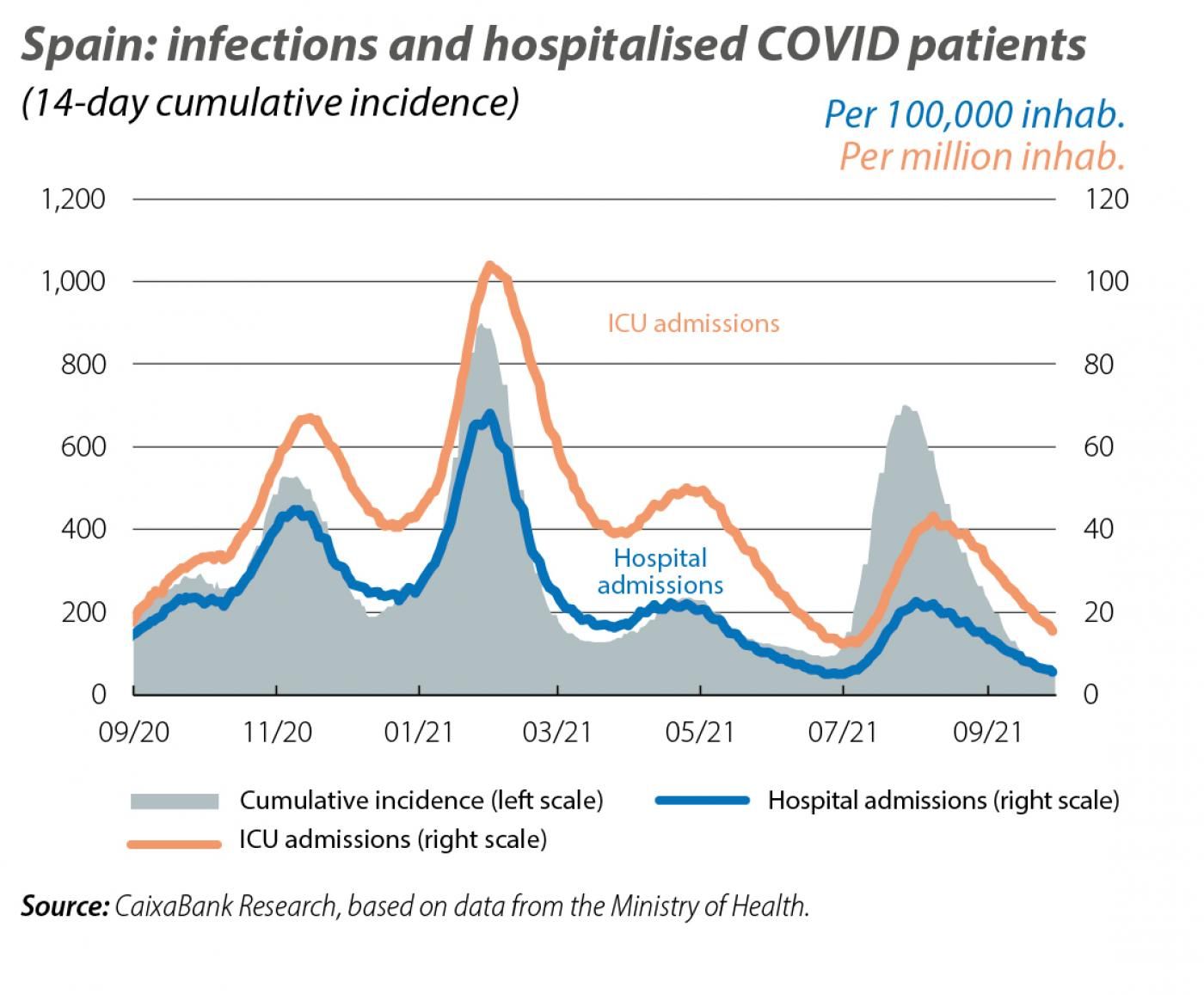 Notable downward revision of GDP growth in Q2 2021, from the initial estimate of 2.8% quarter-on-quarter to 1.1%. The revision is mainly due to lower growth in private consumption and investment, together with higher growth in imports than originally announced. As a result, the GDP gap compared to pre-pandemic levels has widened to 8.4% versus the prior 6.8%. As a result of this revision, and while the growth outlook for the coming quarters is no worse, we adjust our outlook for the coming years. For 2021 as a whole, we cut the GDP growth forecast to 5.0%, while for 2022 we revise it up by 2 decimal points to 6.2%, due to a delay in the materialisation of pent-up demand. 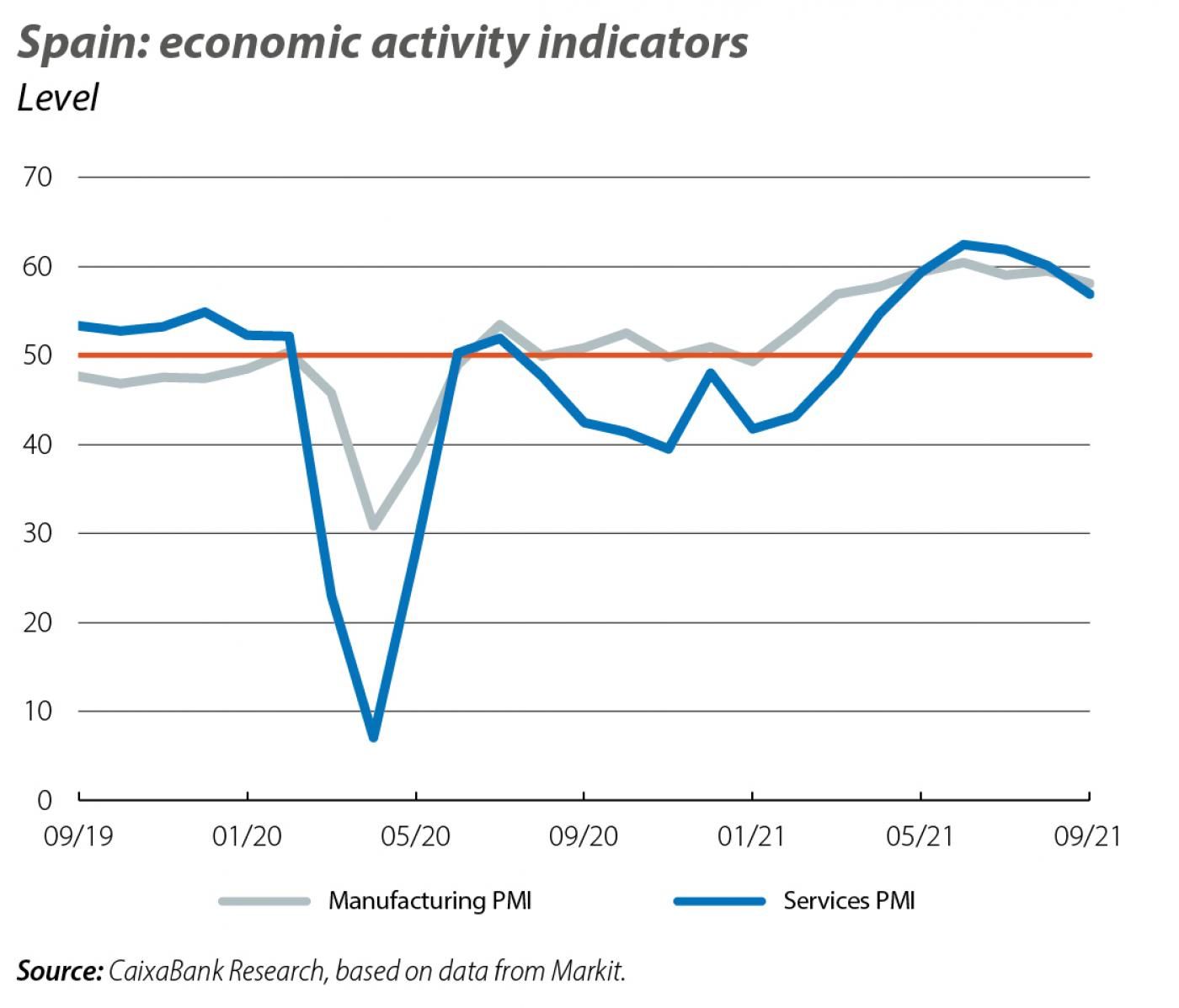 The economic activity indicators continue to show signs of expansion

The economic activity indicators continue to show signs of expansion and that the recovery has been gaining momentum up to August. That said, in September there was a slight moderation in the rate of growth, which is normal following the strong rebound that occurred with the end of the state of emergency. On the one hand, the manufacturing and services PMIs, which measure business sentiment, stood at 58.1 and 56.9 in September, respectively, slightly below the highs of June, they have now registered six consecutive months in expansionary territory (above 50 points). The CaixaBank consumption indicator, meanwhile, climbed 12% in September compared to the same month of 2019, having marked a peak of maximum growth in August (13%). In any case, these are markedly higher rates than in Q2, when it stood only 3% above 2019 levels. 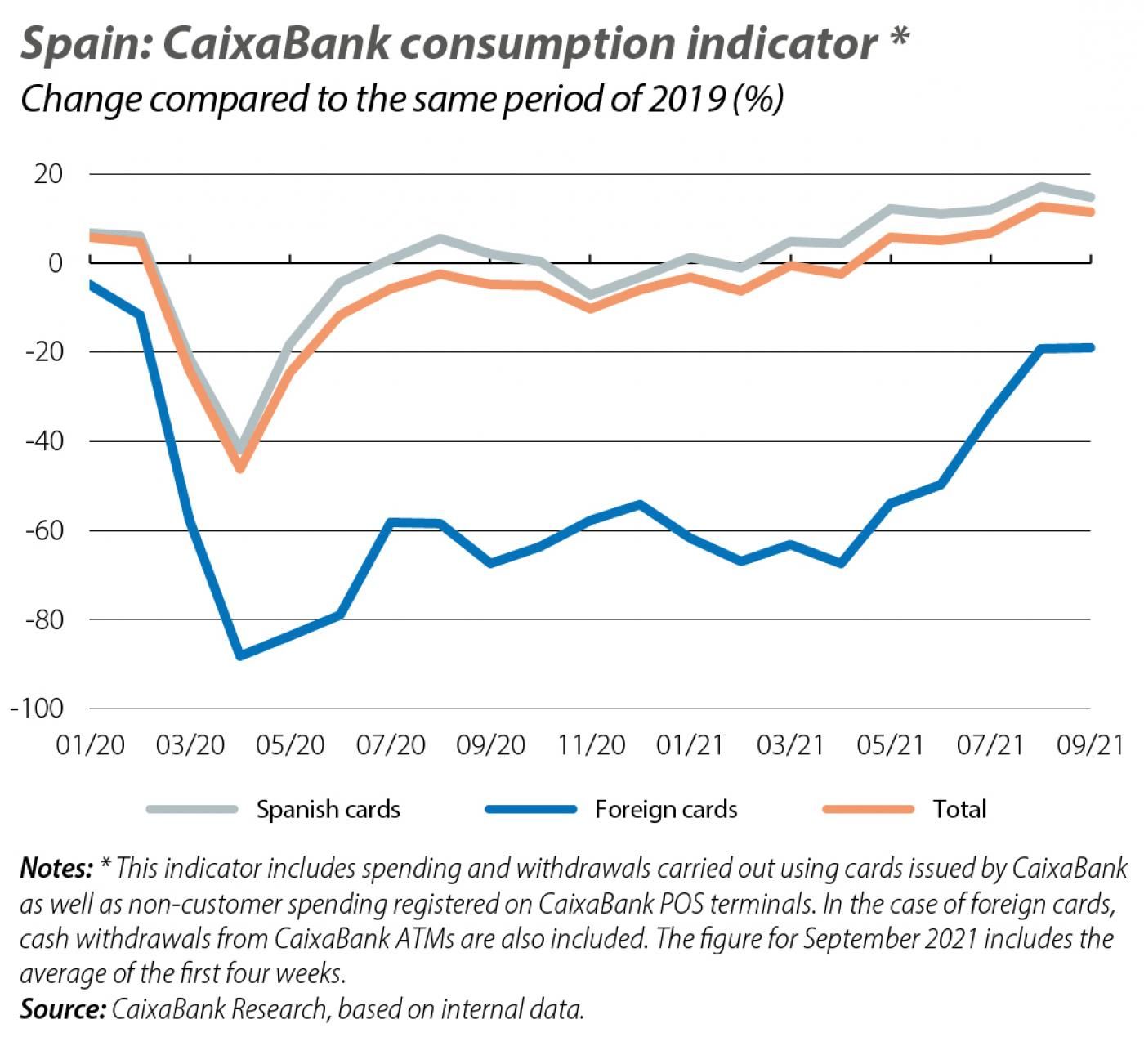 The labour market consolidates its recovery and approaches pre-pandemic levels

After five months on the rise, in September the number of people registered with Social Security, corrected for seasonality, exceeded the level of February 2020 (19.5 million). In addition, there was a reduction of 22,482 workers affected by ERTE furlough schemes, bringing the average for September to 248,797 people. Effective employment (seasonally adjusted registered workers excluding those on furlough) is only 160,000 people short of the pre-pandemic level, and in Q3 as a whole this measure registered a quarter-on-quarter growth of 3.3%, compared to 1.8% in Q2. This would support the prospects of an acceleration in GDP growth in the quarter just ended. 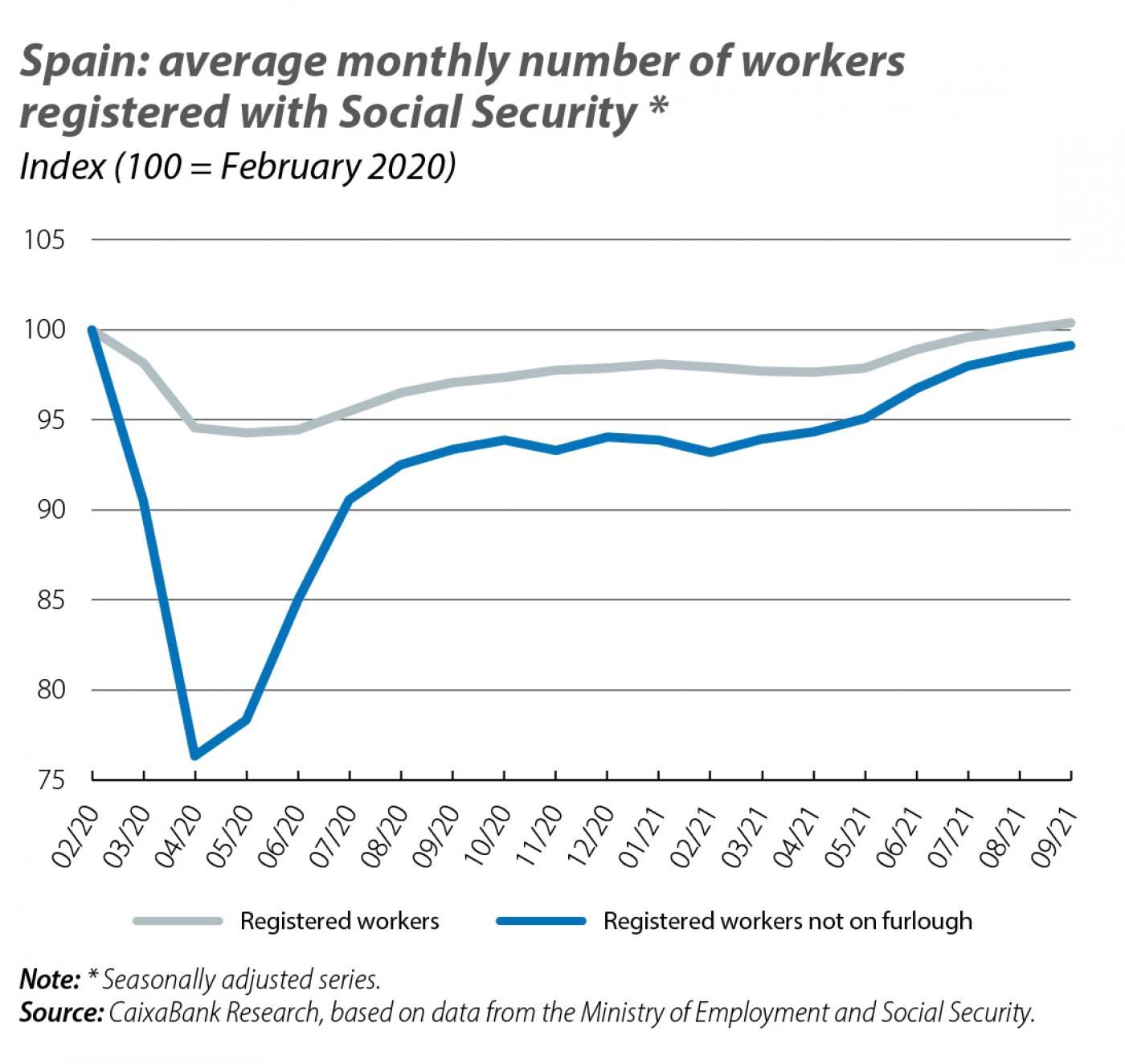 Inflation rises to 4% in September, the highest level since 2008

For the seventh consecutive month, inflation rose by 7 decimal points, driven mainly by the energy component and by electricity in particular. On the other hand, core inflation, which excludes unprocessed food and energy products, is also climbing, albeit at a more contained rate than headline inflation, due to the rising prices of services related to tourism and catering. It now stands at 1%, 3 decimal points higher than in August and its highest level in 15 months. Thus, the gap between the core and the headline rate, of 3 points, is at its widest since the series began back in August 1986. While inflation in the euro area also remains on the rise, the rally has been less intense than in Spain, so the inflation gap has widened in September to 6 decimal points. The upward pressure of electricity could persist over the coming months, given the prices marked by electricity futures up until Q1 2022. CaixaBank Research’s forecast for average annual inflation in 2021 has been raised to 2.4%, with predominantly upside risks due to energy prices. However, for now the inflation rally is predominantly transitory, with no apparent second-round effects and with long-term inflation expectations remaining low. 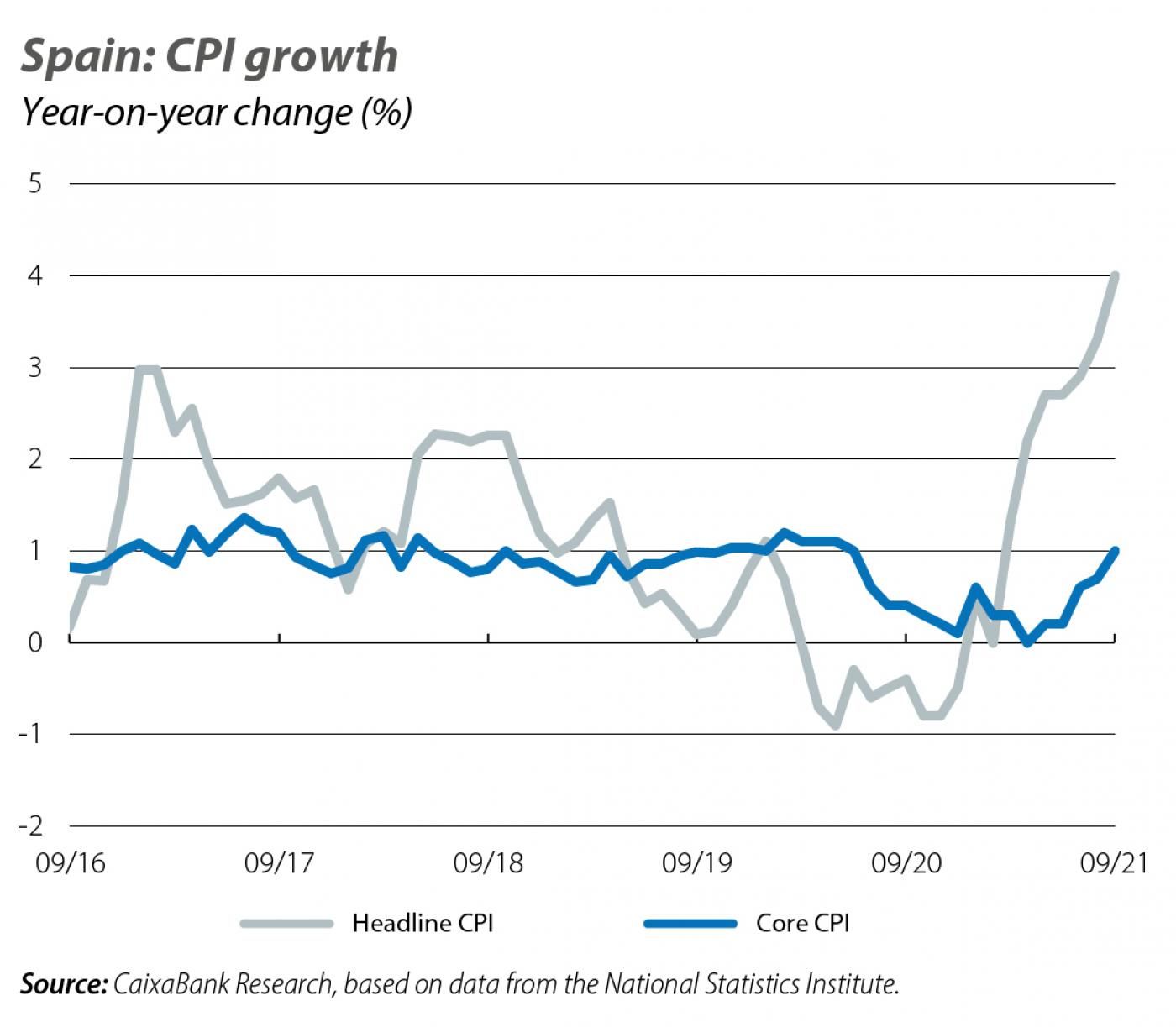 In the first seven months of the year, the current account balance showed a surplus of 4,554 million euros, 15.8% more than in the same period of 2020, but still a far cry from the figures of 2019 (14,033 million euros). The improvement in the current account balance is explained by the correction of the trade deficit, which has reduced by 11.2% year-on-year to –6,995 million: we need to go back to 1987 to find a lower trade deficit in the period January-July. This was helped by the significant improvement in the non-energy component (a surplus of 5,202 million compared to 1,142 million in 2020), in contrast to the sharp rise in the energy deficit, deteriorating by 35.2% to –12,197 million. On the other hand, there was a deterioration both in the income balance, the deficit of which increased by 9.9% to 6,868 million, and in tourism, with a surplus that reduced by 13.2% to 5,539 million, the lowest figure for this period since the series began (in 1993).

The recovery of incomes facilitates the correction of the public deficit

In the first seven months of the year, the state registered a deficit of 4.2% of GDP, compared to 5.4% a year earlier, thanks to a 14.4% year-on-year increase in incomes, with a particularly significant increase in VAT collection (+16.5%). However, there was an acceleration in the rate of expenditure growth to 3.3% (+2.5% up to July), mainly due to the increase in transfers to other public administrations and the rebound in intermediate consumption driven by expenditure on vaccines. Although the COVID-19 crisis will continue to have a considerable impact on the public accounts in 2021 (through ERTE furlough schemes, which have been extended until February 2022, aid to businesses and health expenditure), the economic recovery will help to reduce the public deficit in 2021, potentially placing it at around 8.2% of GDP (10.1% in 2020 excluding Sareb). 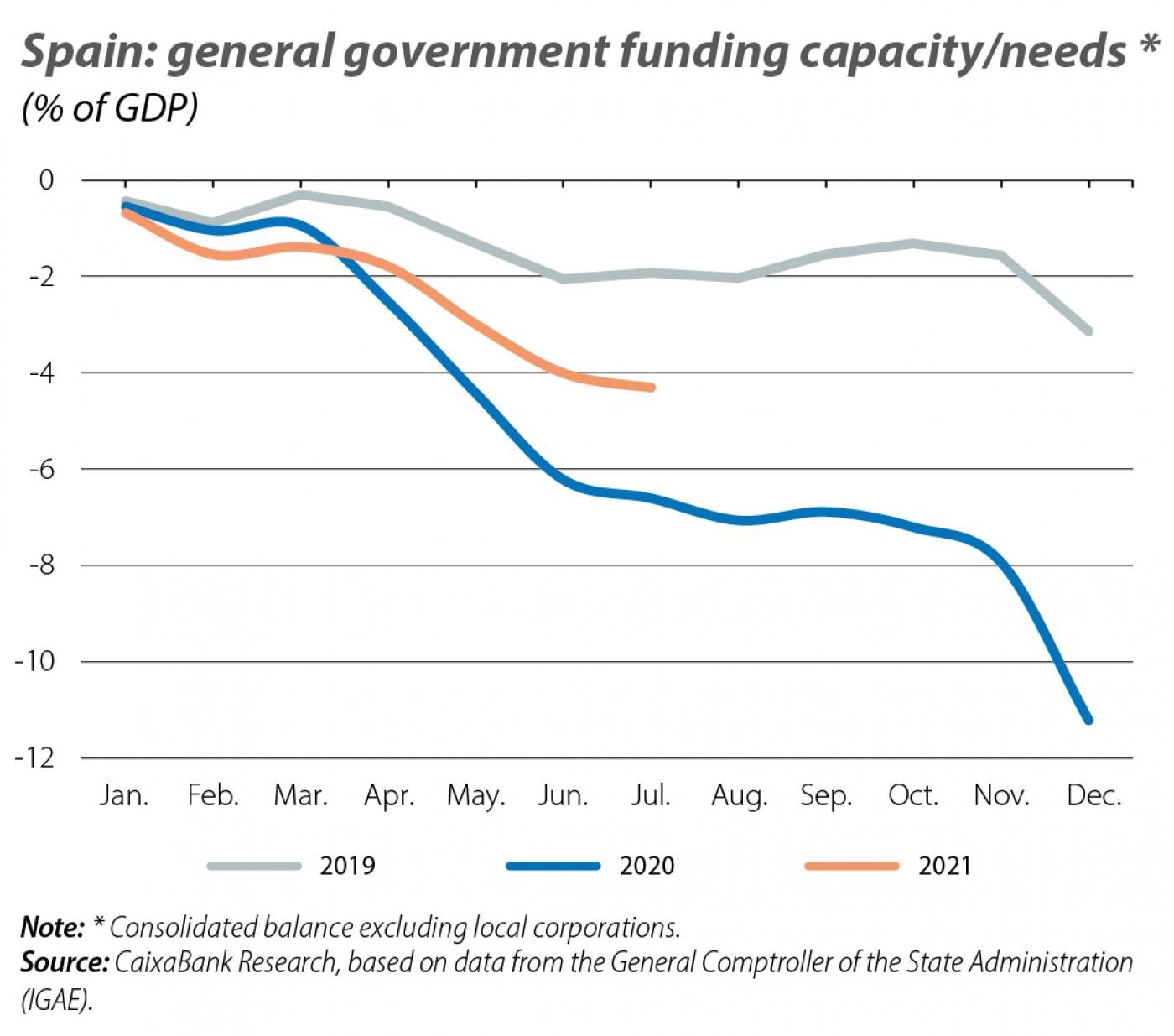 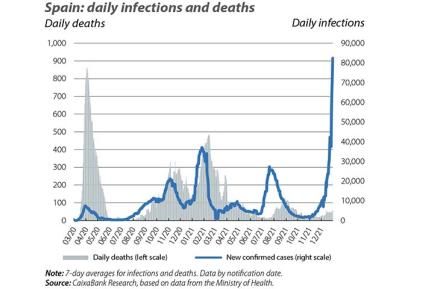 2022, the year to underpin the recovery of the Spanish economy 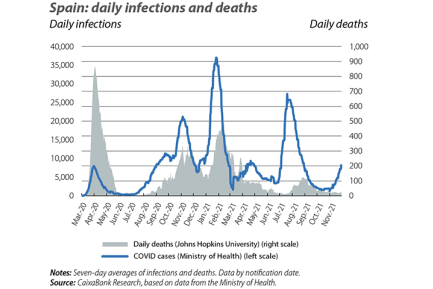 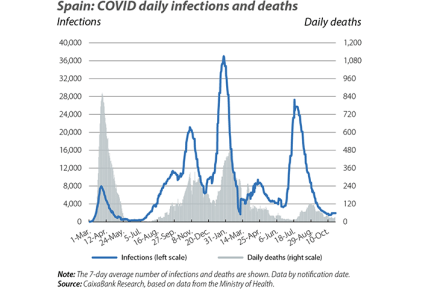