Financial markets are advancing in a more volatile environment

Volatility takes root. The fluctuations experienced by financial markets in April reinforce the view that the period of very low volatility we have witnessed in recent years is coming to an end. This is a result of less accommodative monetary policy, fears of a protectionist shift at a global level and the increase in geopolitical tensions. As such, financial conditions have tightened slightly in recent months (more so in the US than in Europe), as shown by the indices published by the Fed in the US and by the European Central Bank (ECB) in the euro area. Meanwhile, the VIX index, a popular indicator of volatility, fluctuated around the 19-point mark in April, well above the average for 2017. This change in the financial environment is supported by a positive macroeconomic scenario in which the Fed and the ECB are gradually withdrawing the monetary stimulus, albeit at different rates. After years of benefiting from an environment of low interest rates, stock markets are now seeing an increase in volatility and in April they suffered further sessions of losses (albeit less marked than in previous months). Sovereign interest rates, meanwhile, continued to rebound, slightly more notably in the US than in the euro area.

The IMF emphasises the financial risks present in the current macroeconomic environment. In its Global Financial Stability Report of April 2018, the International Monetary Fund (IMF) warns that, although accommodative financial conditions support global growth in the short term, factors such as unexpected spikes in inflation (followed by a faster-than-expected tightening of monetary policy), or a resurgence of uncertainty due to protectionist movements and increased trade tensions, pose a risk to global financial stability. Furthermore, the IMF highlights three vulnerabilities that have accumulated in recent years and that pose a risk to growth in the medium term: the high valuations of a wide range of assets, the significant borrowing levels of the emerging economies and the existence of imbalances in the dollar banking liquidity. The IMF warns that investors should avoid complacency in the current accommodative financial environment and must remain alert to the risks associated with interest rate rises, greater financial volatility and escalating trade tensions.

The stock markets of the advanced economies are experiencing gains but with greater volatility. The main trading floors of the advanced economies had an erratic start to the month of April as they continued to suffer the losses they had experienced at the end of March (which were closely linked to the escalating trade tensions between the US and China). Following this initial uncertainty, the main indices maintained a constructive tone until almost the last week of April when losses once against broke out in the stock markets of the advanced economies. These losses arose amid fears of higher inflation, sovereign interest rate hikes and a poor performance of technology stocks. In the month as a whole, the main indices of the advanced economies closed up with moderate gains in the US (S&P 500 +0.3%) and somewhat greater gains in Europe (Eurostoxx 50 +5.2%, German DAX +4.3%, French CAC +6.8%, Italian MIB +7.0%, Spanish Ibex 35 +4.0% and the Portuguese PSI +2.9%).

Volatility penalises the emerging economy stock markets more. As in the advanced economies, the indices of the emerging economies began the month of April erratically and with negative trading sessions. However, in the emerging stock markets, volatility and losses occurred throughout the rest of the month and the MSCI index for the region as a whole ended April with cumulative losses of 0.6%. Although the setbacks were widespread among the Latin American indices (MSCI index for Latin America –1.5%) and also affected the Asian indices (MSCI index for Emerging Asia 0.0% and the Shanghai Stock Exchange –2.7%), the Russian and Turkish stock markets deserve a special mention. In Russia, the RTS index plummeted more than 15% between 9 and 10 April (following a spike in geopolitical tensions with the US and the expectation of new sanctions on the Russian economy) and ended the month with a loss of 7.6%. In Turkey, meanwhile, the Istanbul stock exchange accumulated a loss of 9.3%, amid greater investor focus on the deterioration of the macroeconomic imbalances in the country’s economy and the calling of early elections by President Recep Tayyip Erdogan.

Upturn in US sovereign rates and more containment in the euro area. In April, US sovereign yields picked up markedly once again due to greater investor confidence in the Fed’s strategy of gradually tightening the financial conditions. The 2-year sovereign interest rate increased by 22 bps, while the 10-year rate rebounded by 21 bps and temporarily exceeded the 3.0% threshold for the first time since January 2014 (this trend of larger upturns in the short-term section of the yield curve has begun to raise fears of a recession in the US, something which we analyse this month in the Focus «On the likelihood of a recession in the US»). In Europe, meanwhile, sovereign rates are kept down by the expectation that the withdrawal of the ECB’s monetary stimulus will be very gradual. As a result, their upturn was more moderate, with yields on 10-year German Bunds increasing by around 6 bps and the risk premiums remaining at contained levels.

The ECB postpones new monetary policy decisions until the summer. In its April meeting, the ECB kept the reference rates unchanged and recalled that net purchases of assets will continue at a monthly rate of 30,000 million euros until at least next September. The meeting, which did not provide any news regarding the future of the asset purchase programme, focused on the assessment of the recent slowdown of economic activity indicators in the euro area. Overall, the Governing Council (GC) of the ECB is of the opinion that the indicators continue to support a scenario of solid and homogeneous growth (a vision we share here at CaixaBank Research) and, therefore, President Draghi stressed that his confidence in the recovery of inflation remains unchanged. However, Draghi also noted that in recent months, the negative risks surrounding global growth have been accentuated (particularly due to geopolitical and commercial factors). As such, the ECB postponed the announcements on the future of its asset purchase programme, which is due to end in September, until June or July. Here at CaixaBank Research, we expect this programme to be extended until December 2018, bringing the net purchases to an end in a phased manner. Beyond this horizon, the ECB is expected to implement a very gradual withdrawal of its monetary stimulus. On this point, in its April meeting the GC also reiterated its intention to maintain interest rates at their current levels well beyond the end of net asset purchases, and Draghi argued that monetary policy will evolve according to a strategy based on patience, prudence and persistence.

The dollar recovers some ground. After remaining stable during the first half of April, the dollar reversed part of the weakness shown in recent months and appreciated 2.1% against the main international currencies. It appreciated 2.0% against the euro (with a slight decline in the exchange rate to 1.21 dollars per euro), 1.8% against the pound sterling and 2.9% against the Japanese yen. The dollar also regained ground against the emerging market currencies, many of which were affected by idiosyncratic political factors. The worst performances against the dollar came from the Russian rouble (10.2%, with the geopolitical backdrop discussed above), the Brazilian real (6.1%, weakened by the increase in uncertainty surrounding the upcoming presidential elections brought about by the imprisonment of the former president Lula de Silva), the Mexican peso (2.9%, with Mexico facing presidential elections next July) and the Turkish lira (2.7%, with the underlying macroeconomic imbalances discussed above).

The price of crude oil accentuates its strength. The price of Brent oil continued last month’s rising trend and stood at almost USD 75 per barrel, a level not reached since late 2014. Despite the threat that rebound in the production of shale would stabilise oil prices, the strength of oil prices in recent months has been sustained by both structural factors (strong growth in global demand, production cuts by OPEC and a sustained reduction of crude oil stocks in the US) and temporary factors (geopolitical uncertainty, particularly surrounding the possibility of the US reintroducing sanctions on Iran). 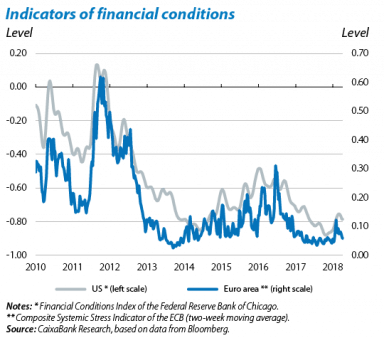 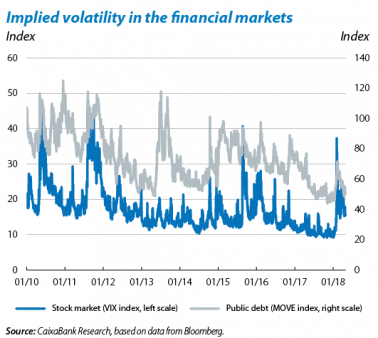 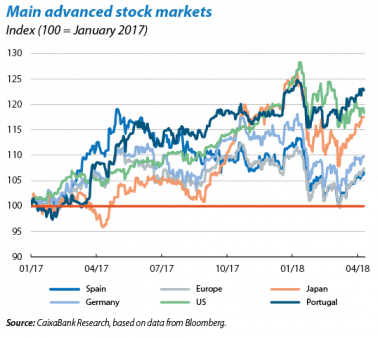 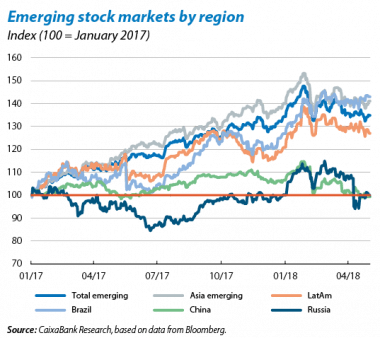 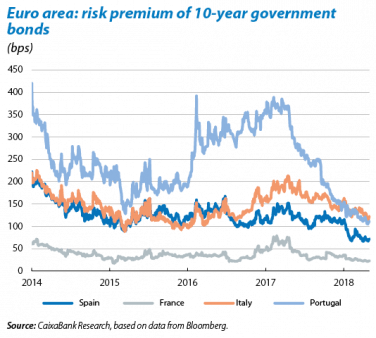 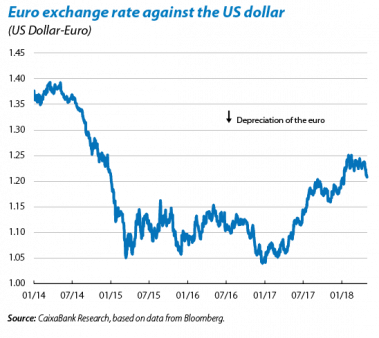 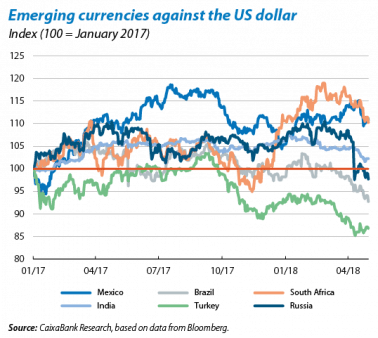 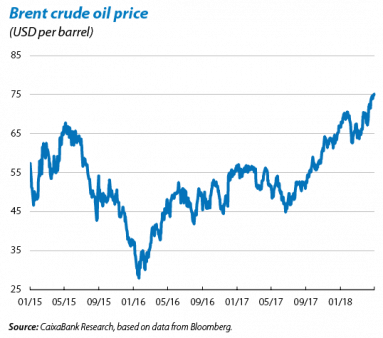