Domestic demand is boosting growth and the negative contribution made by foreign demand is decreasing. In 2015 Q2 the rate of growth for the Spanish economy speeded up once again. Specifically, GDP rose by 1.0% quarter-on-quarter (3.1% year-on-year), reaching a similar pre-crisis level in 2007. The breakdown by component shows that the pattern of growth is more balanced than in preceding quarters. GDP growth continues to be supported by domestic demand, contributing 3.3 pps to growth year-on-year (3.1 pps in Q1). The components making the biggest contribution were private consumption and capital goods investment while public consumption and investment in non-residential construction moderated after enjoying an upswing in Q1. On the other hand the foreign sector made a less negative contribution to year-on-year growth in GDP (–0.2 pps compared with –0.4 pps in Q1) as a result of the good trend in exports and the contained rise in imports. We expect this trend to consolidate in 2016 thanks to the recovery in the euro area and the euro's devaluation, which will allow exports to make a positive contribution to GDP growth once again.

The IMF warns of the Spanish economy's low long-term growth potential. In spite of the good cyclical moment for the Spanish economy we must not forget that a large part of this boost comes from the positive impact of temporary factors (low oil prices, the euro's depreciation and lower income taxes). In the coming quarters their effect is likely to gradually dissipate, giving rise to a slight slowdown in GDP. In this respect the main concern voiced by the IMF's annual report on the Spanish economy is its potential growth rate, which the institution places at 1.3% in 2020 due to low growth in productivity, limited investment and the modest contribution of the labour factor (because of demographic factors and high structural unemployment). To boost the economy's growth potential and job creation, the IMF recommends furthering labour reforms (e.g. by linking wages to company productivity and improving training for the unemployed), taking measures to increase the average size of firms (e.g. by encouraging competition and eliminating regulatory differences at a regional or local level), promoting corporate internationalisation, helping private deleveraging and continuing the process of fiscal consolidation.

Private consumption positions itself as the main engine of growth. As had been suggested by leading indicators in Q2, private consumption grew strongly (by 1.0% quarter-on-quarter), a trend that continued in Q3 judging by the good figures for retail and consumer goods in July. Several factors lie behind this dynamic consumption, some more temporary in nature such as the reduction in the energy bill due to lower oil prices and lower income taxes, and others of a more structural nature, particularly improvements in the labour market and financing terms. In this last area, new loans granted for consumption rose by 39.5% year-on-year in July (cumulative over 12 months) and interest rates for new loans continued to fall, converging towards the levels for the rest of the countries in the euro area.

The pace of job creation was strong in Q2 totalling 411,800 people according to the LFS, a figure similar to the one in 2014 Q2 and much better than the figures during the crisis years. As a result the year-on-year rate of change in employment remained strong (at 3.0%) and the unemployment rate fell by 1.4 pps to 22.4%, in spite of the labour force growing. This improvement in employment was widespread throughout all branches of activity and concentrated in the private sector. The same trend can also be seen in the number of registered workers affiliated to Social Security for July.

The rate of growth in total employee wages dipped again in Q2 as the impact disappeared from the refund of 25% of the extraordinary payment to civil servants in Q1. Specifically, wages per employee fell by 0.6% quarter-on-quarter in Q2 after posting growth of 0.9% quarter-on-quarter in Q1. Nonetheless total wages for employees (the wage bill) grew by 0.4% in the quarter due to an increase in the number of employees (1.0% quarter-on-quarter). The government is expected to return an additional 25% of the extraordinary payment for civil servants before the end of the year and the remaining 50% in 2016.

The trade deficit increased in June in spite of the improved energy balance. Although goods exports performed extremely well in Q2 (up by 5.4% year-on-year), the rate of growth in imports in nominal terms speeded up to 5.7% year-on-year so that the trade deficit (cumulative over 12 months) increased to 24.07 billion euros, a figure that would have been higher had oil prices not fallen. Over the coming months the fact that oil has become cheaper again will help the improved energy balance to continue contributing to the good performance by exports. Moreover the record number of international tourists this year so far suggests that 2015 as a whole will post a total figure that exceeds the almost 65 million tourists seen last year. France and the Asian countries are contributing most to this improvement in international tourism, in clear contrast to Russia. See the Focus «Tourism in Spain: more resilient and competitive» in this report.

Inflation returned to negative figures in August after only two months in positive terrain. The CPI posted a year-on-year change of –0.4% in August, representing a fall of 0.5 pps compared with inflation the previous month (0.1%). Although the breakdown by component has yet to be published, this decline can be explained entirely by energy prices. In the short term the uncertainty surrounding the trend in crude oil will crucially affect how the general CPI performs. On the other hand the upward trend in the more stable components of inflation has continued, in line with the strong push from domestic demand. Core inflation rose from 0.6% to 0.8% in July.

The government brings forward its presentation of the Budget for 2016. The expected reduction in the central government deficit (by 0.7 pps to 2.2% of GDP) is based on a favourable macroeconomic situation that forecasts 3.0% GDP growth in 2016. In this respect Spain's Independent Authority for Fiscal Responsibility (AIReF) issued a report evaluating the government's macroeconomic scenario and concluded that the economic scenario is plausible and has balanced risks, although it points to possible difficulties in carrying out the strict public spending containment policy deduced from the forecasts for public consumption calculated by the government. The Budget predicts an increase in tax revenue of 4.0% and a decrease in expenditure of 4.4% as a consequence of falling interest payments and unemployment benefits resulting from the cyclical improvement in the economy. In this respect the Budget does not include additional fiscal consolidation measures. It also predicts a 0.25% increase in pensions and a notable rise in spending on personnel after years of containment, as reflected in the 1.0% increase in wages to public employees, the return of 50% of the extraordinary payment from 2012, the recovery of free days and the rise in the staff replacement rate.

The recovery in activity is also benefitting from the boost in credit, perceived especially by SMEs. Positive developments in new loans to non-financial companies of less than one million euros, those generally requested by SMEs, increased by 13.6% year-on-year in July (cumulative over 12 months), giving us some cause for optimism. The bank lending survey for July also reveals that banks saw a significant increase in demand from this segment in Q2 and expect this to increase even further in Q3. Moreover interest rates for this kind of loan have been falling considerably for more than a year, now coming close to the levels in the rest of the countries of the euro area, an irrefutable sign that financial fragmentation is decreasing as a consequence both of the policies implemented by the ECB and also of the Spanish banking sector strengthening its balance sheets. Regarding this last aspect, it should be noted that the NPL ratio is still falling and reached 11.0% in June thanks to a notable decline in doubtful loans (–19.8% year-on-year to 149.31 billion euros). 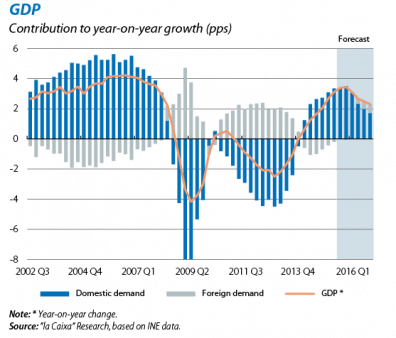 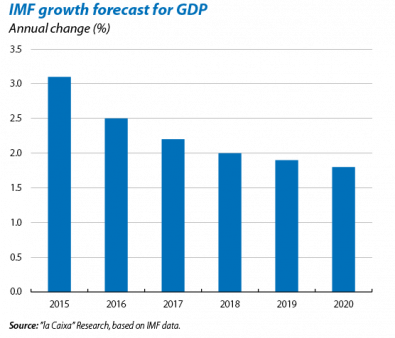 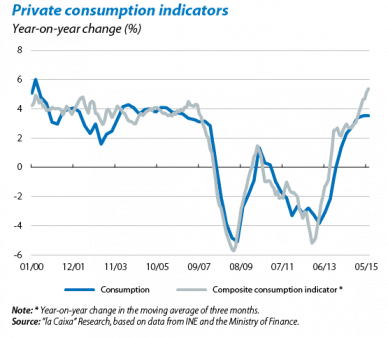 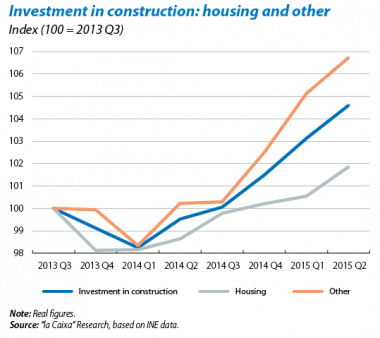 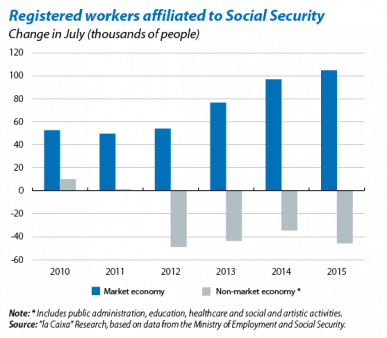 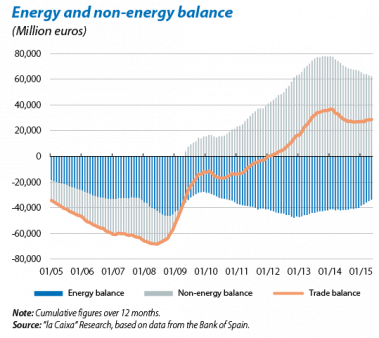 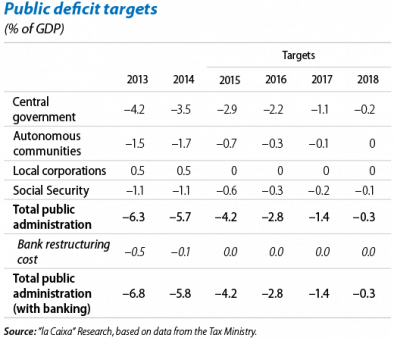 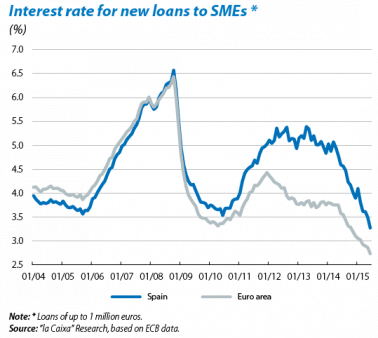