A good end to the year for the Spanish economy

The Spanish economy's rate of growth is still strong in the final part of the year. After a slight slowdown in the quarter-on-quarter rate of growth in Q3, to 0.8% (in Q2 it was 1.0%), recent indicators have been better than expected and point to this pace continuing in Q4. The increase in household purchasing power thanks to job creation and falling energy prices is helping consumption to remain firm. The rise in credit also confirms that monetary stimuli are having the desired effect. The euro's depreciation due to the divergence between the ECB and Fed's monetary policies is also helping to boost exports in spite of the slight downturn in the world economy. With a view to 2016, GDP will continue to grow at a high rate although somewhat lower than the previous year, in the order of 0.6% quarter-on-quarter, providing an annual rate of 2.7% compared with 3.1% in 2015 (see the article «The recovery in Spain: a qualitative step forward» in the Dossier).

All activity sectors contribute to growth. The breakdown of GDP for Q3, up by 3.4% year-on-year, shows that services led the recovery on the supply side with a contribution of 2.2 pps in the last quarter. The role played by industry was also notable and the positive contribution of 0.3 pps made by construction for the third consecutive quarter confirms that this sector's recovery is consolidating.

Indicators show that services continue to lead the way and that industry has maintained its tone in Q4. The purchasing managers sentiment index (PMI) rose slightly in October to 55.0 points compared with 54.6 in September and growth in the services sector has offset the slight moderation in the manufacturing index. Although October's figures are a little lower than the average for Q3, both indices (manufacturing and services) are well within the expansionary zone so we expect the rate of growth to remain high in Q4. The outlook for industry is favourable thanks to improved activity in the euro area. This can be seen, for instance, in September's industrial orders: those from the euro area increasing significantly by 6.5% year-on-year although the rest of foreign orders grew by a subdued 2.0% year-on-year.

Domestic demand: the main engine of growth. The breakdown of GDP by demand component shows that domestic demand contributed 1 pp to quarter-on-quarter growth in Q3 thanks to the good performance by private and public consumption. Although capital goods investment maintained its good tone, investment in construction was more subdued after the upswing in the first quarter of the year. The increase in domestic demand pushed up imports so that foreign demand deducted from GDP growth (–0.2 pps) in spite of the notable increase in exports. Over the coming months, however, we expect imports to slow down once consumption and investment start to run out of steam. In 2016 the foreign sector will therefore provide a positive contribution to GDP growth and domestic demand will lose some of its relative importance.

The strong growth in domestic demand continues in Q4. After a period in which household consumption increased strongly (1.0% quarter-on-quarter in Q3), indicators point to this continuing its vigorous rate of growth. Of note is the excellent performance by automobile sales with rates much higher than the historical average, largely supported by the Efficient Vehicle Incentive Programme (PIVE) whose aim is to encourage people to replace their vehicles with others that consume less energy. The fact that the government has extended this plan until July 2016 suggests automobile sales will continue to be high, at least during the first half of the coming year. Consumer confidence data also confirm the good tone of consumption: October and November's average figure of –0.3 points (–1.3 in Q3) is at a very high level historically. Other data related to investment are also advancing strongly. Specifically, of note is the acceleration in the rate of growth for industrial production, up to 4.1% year-on-year in Q3 (3.5% in Q2), and the higher consumption of electricity by industry, up by 2.2% year-on-year in Q3 compared with 3.6% in October.

Jobs are still being created at a dynamic rate. The number of workers affiliated to Social Security grew in October by 35,230 people, seasonally adjusted, maintaining the year-on-year rate of change at a high level (3.2%). The positive contribution of industry, construction and non-tourism services is ensuring a solid recovery in the labour market. Moreover, the strong increase in the number of Social Security contributors over the last few months (over one million since the start of the recovery in 2013 Q2), which looks like continuing, is extending employment to an increasing number of households, which is crucial for boosting spending. On the other hand, although wages have remained contained (the wage rise established in collective agreements was 0.8% annually in October compared with 2.4% for the historical average), in general workers have gained purchasing power over the last few months because of low inflation (forecast at –0.5% for the whole of 2015) and the population's greater purchasing power should boost private consumption at the end of the year. With a view to 2016 we do not expect wages to grow above inflation as this will continue its upward trend (see the Focus «Inflation expectations for 2016: rising» in this Monthly Report), so consumption will not enjoy so much support from this front. However, the increase in the number of employed people throughout 2016, which might reach 400,000, should continue to be a very important factor in maintaining high growth rates for spending.

The real estate market is definitely expanding. Thanks to the improved labour market and better financing conditions, demand for housing is steadily growing. In September house sales advanced strongly by 12.9% year-on-year (cumulative over 12 months), a figure that confirms that the upward trend started in 2014 is gaining traction. Given that construction is recovering more slowly, this vigorous demand is helping to reduce the excessive stock of new residential properties for sale. On the other hand house prices rose by 1.4% year-on-year in Q3 (1.2% in Q2). The trend in both variables therefore confirms that the real estate market is leaving behind its stabilisation phase and, at least in some prime areas where there are stock shortages (for example large cities), is already in an expansionary phase.

Exports: at record highs. Although foreign demand deducted from quarter-on-quarter growth in GDP, it is important to note the good figures for real exports, up by 2.8% quarter-on-quarter in Q3, a much higher rate than the average for the last two decades, namely 1.2%. However, the vigorous growth by imports of 4.0% quarter-on-quarter held back the trend in the foreign sector. The recovery of the euro area, which represents close to half Spain's exports, has contributed in the last few quarters to the good tone in exports and, as the euro area's economy continues to improve, we should see exports to this trading partner increase. Thanks to the support provided by the euro's depreciation, sales to the US should also grow. Exports to the emerging countries could also increase as a consequence of the slight acceleration predicted for these economies. We therefore expect exports to continue growing significantly as a whole.

Probable deviation from the target public deficit for 2015. The improvement in the state budget execution in October will not be enough to offset the worse figures posted by Social Security and the autonomous communities. It will therefore be very difficult to meet the fiscal deficit target for public administrations by the end of the year, namely –4.2%. Given this risk of deviation, the European Commission has urged the government the present an update for its 2016 Budget, incorporating measures to reduce the public deficit in line with the path agreed. Regarding the trend in debt, our forecasts expect this to reach 100.6% of GDP in 2015, a level at which it will stabilise in 2016 and then embark on a path of moderate reductions.

Lots of room for improvement in the ease of doing business. According to the Doing Business 2015 report for Spain, most of the autonomous communities are below the European Union average in the four criteria evaluated: starting a business, dealing with construction permits, getting electricity and registering property. There is great divergence between regions in terms of regulatory efficiency and the good practices of those in a better position should be copied. Some of the recommendations that can be deduced from this report would be, among others, the need to consolidate and eliminate red tape to start up a business, a reduction in electricity costs and extending online administration to make processes easier. 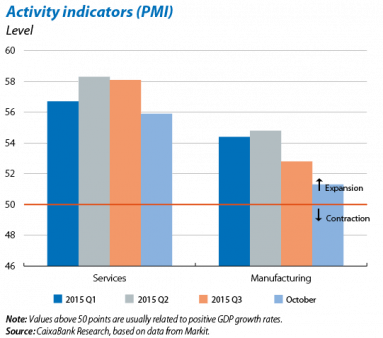 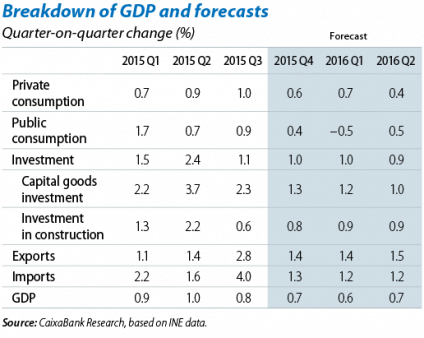 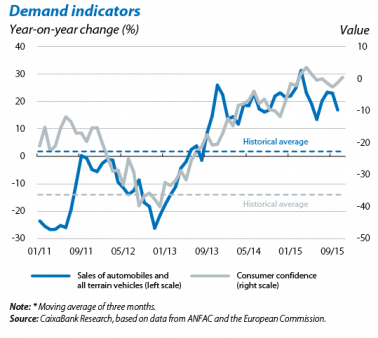 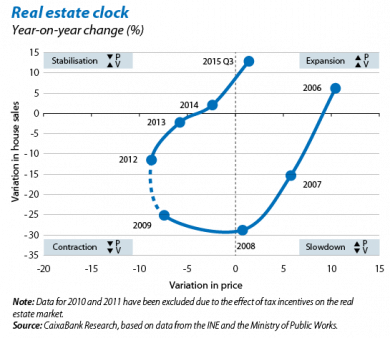 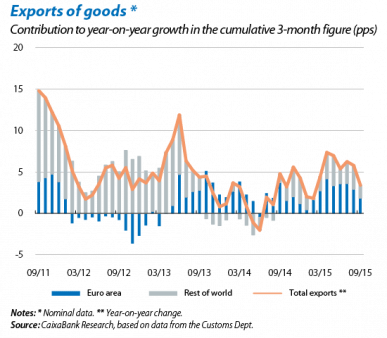