The good trend continues for the Spanish economy

Strong growth in economic activity in Q1 has been confirmed, of 0.8% quarter-on-quarter (3.4% year-on-year). Key to this increase is dynamic domestic demand, contributing 3.8 pps to the year-on-year growth in GDP thanks to the good performance by consumption and investment while exports made a less negative contribution of –0.4 pps (–0.6 pps in Q4). According to CaixaBank Research forecasts, the Spanish economy will grow by 2.8% in 2016 (3.2% in 2015), a figure befitting a mature phase of the cycle although we expect a progressive slowdown in the second half of the year due to the gradual disappearance of some tailwinds, such as the slump in oil prices which have now bottomed out and have actually started to pick up again. In any case the medium-term outlook is still favourable and economic activity is very likely to grow by around 2.4% in 2017.

Domestic demand consolidates its role as the main driver of growth thanks especially to the increase in private consumption which stood at 0.9% in Q1 in quarter-on-quarter terms. The improvement in the labour market and in financial conditions continues to support the situation of households which, in turn, helps to maintain a good rate of growth in consumption as well as the deleveraging process (see the Focus «Private debt: some benchmarks for the Spanish case» in this Monthly Report). Capital goods investment also continued to advance a good rate (1.3% quarter-on-quarter) albeit more slowly than in previous quarters.

The good pace of job creation has continued in Q2, a sign of corporate vitality that has been improving for several quarters now. According to data from the National Accounts system, full-time equivalent employment increased by 0.9% quarter-on-quarter in Q1, placing the year-on-year growth figure at 3.2%. The average salary per employee fell by 0.3% year-on-year, indicating that wage moderation has continued during the first part of the year. With a view to Q2, April's figures suggest that the favourable performance posted in Q1 is continuing. Specifically, the number of registered workers affiliated to Social Security increased by 55,307 people (data seasonally adjusted), keeping the year-on-year increase at a high level, namely 2.7%. All the sectors, with the exception of public administration, made a positive contribution to growth (see the Focus «The good trend in the labour market is consolidating» in this Monthly Report).

Public consumption continued to post expansionary figures, advancing by a notable 0.8% quarter-on-quarter in Q1 (2.6% year-on-year). Although this provides a boost for economic growth in the short term, the consequences for public debt, which was higher than 100% of GDP in Q1, must also be taken into account. The position of the European Commission is still firm in this respect. Firstly, it has reminded Spain that it is vitally important not to abandon the country's agenda of structural reforms as these must be implemented to be able to maintain a moderate and balanced rate of growth in the long term. And, secondly, it will probably raise Spain's budget deficit targets (to 3.7% of GDP in 2016 and 2.5% in 2017), delaying the correction of the excessive deficit by one year, and has announced that, in July, it will decide whether the country should be penalised for not meeting its 2015 deficit target. Focusing on the new deficit targets, the one recommended by the Commission for this year is similar to the target contained in the Stability Plan (PE), namely 3.6%. The AIReF has endorsed the macroeconomic assumptions used to draw up the PE but also believes that achieving the 3.6% deficit target this year is feasible but demanding. Nonetheless, its achievement depends on implementing the measures to contain expenditure announced by the government. For the coming year, the target recommended by the European Commission is more ambitious than the one contained in the PE, namely 2.5% and 2.9% of GDP respectively, so more fiscal consolidation will still be required.

Economic activity has dipped in Q2 but remains at a high level. This can be seen in the PMI indices for the services and manufacturing sectors, which have remained in an expansionary zone for months now but appear to be running out of steam. This pattern can also be observed in new industrial orders. An overall view is provided by the OECD's leading indicator for activity, designed to reflect turning points in the economic cycle, and the message is very similar: the positive momentum of economic growth is still stable. In line with this, private consumption data continue to be favourable: retail sales, adjusted for seasonal and calendar effects, rose by 4.1% in April compared with the same month last year.

Real estate activity is on the up. According to data from the National Accounts system, in 2016 Q1 investment in housing continued to recover, growing by 1.2% quarter-on-quarter (3.3% year-on-year). Demand for housing also looked very dynamic, as shown by the good trend in house sales, up by 11.1% year-on-year in March (cumulative over 12 months). This boost from demand has been passed on to house prices which, in spite of having slowed down their growth in quarter-on-quarter terms (0.2% in 2016 Q1 according to the Ministry of Public Works), have maintained the upward trend started in 2015, growing by 2.4% in year-on-year terms (1.8% in Q4). Over the coming months regional divergences in terms of excess supply and growth in sales will keep the pressure on prices different in each province.

Inflation remains in negative terrain but there will be a significant change in trend over the coming months. In April the consumer price index shrank by 1.1% in year-on-year terms but this latest drop in the inflation rate was caused by temporary factors, particularly the fall in the price of package holidays in year-on-year terms (which always see a temporary spike during the Easter holidays) due to the fact that, this year, all the public holidays fell in the month of March instead of being shared between March and April, as happened last year. This factor also had a significant impact on the core inflation rate, which fell by 0.4 pps in April to 0.7%. May's general inflation rate rose by 0.1 pp to –1.0%, a change in trend that will consolidate over the coming months, supported by the growth in household consumption and rising oil prices. In fact, the inflation rate will go slightly above 1% by the end of 2016.

International trade slowed down temporarily in March. Nominal exports, which had been growing energetically for several quarters with year-on-year changes of more than 3% (cumulative over three months), rose in March by a mere 0.2% year-on-year, partly due to the Easter effect. In fact, exports grew by 1.6% once the figures have been seasonally adjusted. Imports did not look particularly strong either, dropping by 0.7% year-on-year (cumulative over three months). However, as in the case of exports, there are some fine distinctions to be made: part of the drop in imports was due to the fall in oil prices. The trend in imports of goods in real terms continues very strong. A good reflection of this is the 5.4% year-on-year rise contained in the quarterly national accounts for Q1 as a whole. The current account balance improved in Q1 and reached 1.4% of GDP, thanks to the reduction in the deficit of primary and secondary income.

The restructuring and privatisation of banks owned by the central government is progressing as planned, although it has yet to be completed. This is the conclusion of the fifth assessment carried out by the European Commission after the end of the bank bail-out programme. The report states that the banking sector is still on a favourable path thanks to the strength of the economic recovery and the ECB's monetary stimuli. In March non-performing loans fell to 129,222 million euros, accumulating a 34% decline since the peak reached in January 2014. The NPL ratio also continued its downward trend, falling below 10% for the first time in four years. Over the coming months, the improvement in the economy and low interest rates will continue to help reducing banks' NPL ratio. 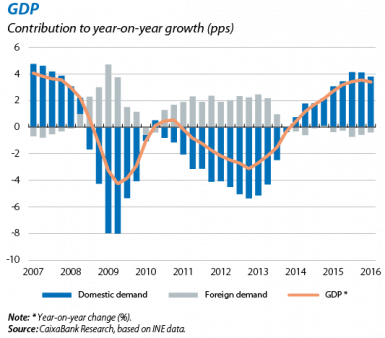 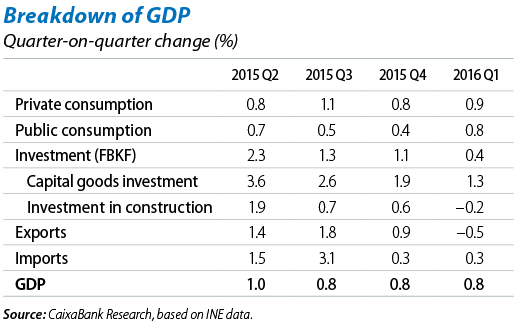 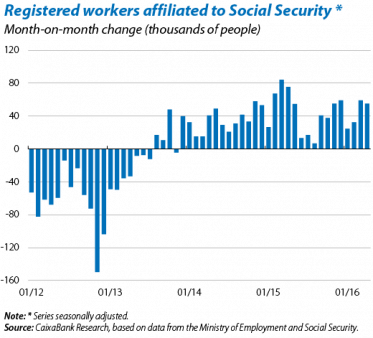 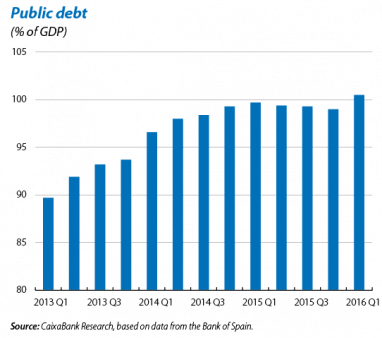 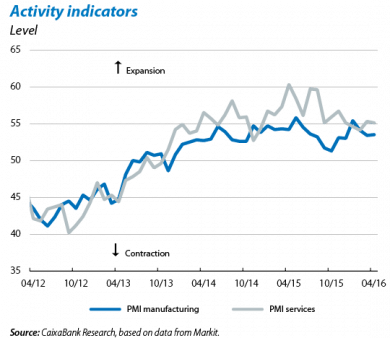 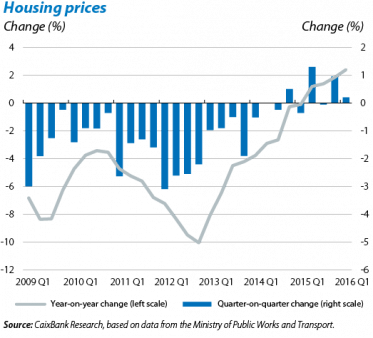 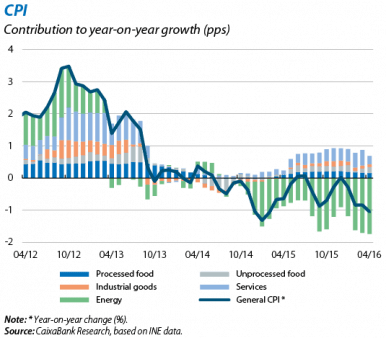 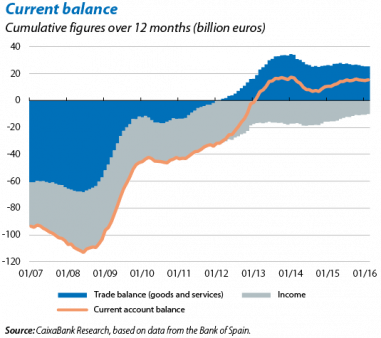 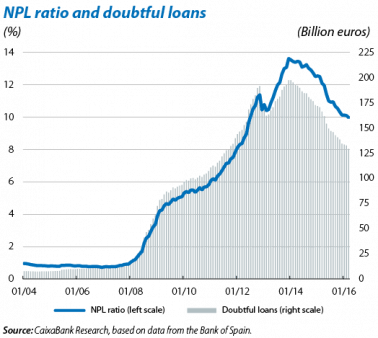