Growth in the euro area continues as expected

The euro area consolidates considerable growth prospects. The European Commission has maintained a scenario of a gradual recovery for the euro area with a growth forecast of 1.6% for 2016 and 1.8% for 2017. The institution points out that the ECB's accommodative monetary policy will continue to support domestic demand, in particular household consumption and investment. However, it warns of the fragility of the recovery and especially stresses the need to intensify the rate of structural reforms to bolster and boost the euro area's economy. In this respect, making use of the experience garnered in Cyprus and Greece, the Commission has set up a Structural Reform Support Service to help those countries whose reformist drive appears to have diminished recently.

As predicted, the euro area's GDP increased in 2016 Q1 by 0.5% growth quarter-on-quarter, 0.2 pps more than the previous quarter and 0.1 pp above the average for 2015. This growth was principally led by Spain, Germany, France and Austria. Spain grew by 0.8% quarter-on-quarter, the same rate as the last two quarters. Germany posted its best figure for the last two years with growth of 0.7% (1.6% year-on-year) while France advanced by 0.6% (1.4% year-on-year). However, the figures for Italy and Portugal remained below average, with Italian GDP at 0.3%, in line with our forecasts, and Portuguese GDP growing by 0.1% quarter-on-quarter, less than expected. Q2 activity indicators for Portugal suggest this slump is temporary and that the country will return to a faster growth rate in the coming quarters. Nevertheless, for the euro area as a whole the CaixaBank Research scenario has growth remaining at similar levels to those of Q1 in the coming quarters.

Emerging Europe continues to grow but unevenly. In Q1 the region continued to post acceptable growth rates, as verified by the fact that three countries, Romania, Slovakia and the Czech Republic, have maintained year-on-year increases in GDP of more than 3% while Poland has been slightly less dynamic (2.5% year-on-year). Hungary is still the weak link for the region with growth at a low 0.5% year-on-year. As this is the underlying trend, the latest push in activity reveals that the discrepancies between emerging countries are increasing. Quarter-on-quarter growth was surprising lively in Romania, Slovakia and the Czech Republic with figures ranging from 1.6% to 2.0% but unexpectedly negative in the case of Poland (–0.1%), although this figure is probably a result of the situation normalising after an uncharacteristically vigorous end to 2015. With the exception of the Hungarian economy, emerging Europe's growth prospects are positive in 2016.

The pace of growth in activity continues in 2016 Q2. The composite PMI for the euro area as a whole registered 52.9 points in May, an expansionary level (above the 50 points) and very similar to the previous month. By country, the best figures were achieved in the core (in Germany and France it picked up to 54.7 and 51.1 points respectively) while growth slowed down slightly in the periphery. Industrial production increased by 0.1% year-on-year in March, a lower figure than the one posted in the first two months of the year. German industrial production also saw a weaker increase in March (0.2% year-on-year) while French industrial production dipped (–0.7% year-on-year). The indicators as a whole, therefore, point to the expansion continuing at a moderate rate in 2016 Q2.

Consumption continues to improve. Demand indicators have remained stable in the first half of 2016. Retail sales grew by 2.3% year-on-year in 2016 Q1, a little below the average figure of 2015 (2.8%). Meanwhile consumer confidence stabilised at –8.2 for the year so far, 5 points above the historical average, with a significant increase in the month of May to –7. This improvement in confidence suggests that private consumption will continue as one of the major supports for the euro area's economic recovery.

Inflation picks up but remains in negative terrain. The year-on-year change in the euro area's harmonised index of consumer prices (HICP) stood at –0.1% in May, 0.1 pp above the previous month's figure, partly due to the smaller drop in the price of the energy (–8.1% year-on-year) and also to a larger increase in the prices of the services component (from 0.9% year-on-year in April to 1.0% year-on-year in May), in turn positively affecting core inflation by 0.1 pp (to 0.8%). We expect this gradual rise in inflation to continue, supported by the progressive increase in oil prices and a somewhat more moderate rise in core inflation. In the first half of 2017, the ECB's expansionary monetary policies and the solid economic recovery in the euro area will push inflation up to levels close to the central bank's target.

The euro's depreciation over the coming months should help exports. In the last two years, the euro area has been supported by the euro's depreciation as an additional factor boosting exports from the monetary union as a whole. Specifically, from the beginning of 2014 up to November 2015, the euro depreciated by approximately 12% compared with a representative basket of currencies. This situation has been reversed temporarily in the last five months, with the euro appreciating by 4%. However, the continuation of the ECB's accommodative monetary policy, the opposite to the Fed which has announced that it will soon raise interest rates, should encourage the euro to depreciate again over the coming months. Exports grew by around 5% year-on-year in 2015 and are currently advancing at a slightly slower rate (below 4%). In spite of the support of a slightly weaker euro, it is important for the export sector to continue focusing on improving its competitiveness and on promoting innovation and the differentiation of the goods and services exported to international markets.

The Eurogroup approves the first review of Greece's bail-out programme. The Eurogroup gave a green light to the reforms and fiscal measures carried out by the Greek government, which include a contingency plan of additional measures should the fiscal targets not be met. Although the medium-term target (2018) for the primary surplus is still 3.5%, the measures taken should help to achieve this. Greece can now receive the second tranche of its bail-out (10.3 billion euros). The sustainability of Greek public debt was also tackled and the main guidelines were agreed to achieve this, without haircuts, as from 2018. Gross borrowing should not exceed 15% of GDP up to 2030, which would be achieved particularly by cutting interest rates and extending maturities, although the details have yet to be specified (and approved). In any case the Greek economy's growth will continue to be the main factor ensuring debt is paid back and, to this end, it is vital to implement the agreed reforms effectively.

Germany has an energetic start to 2016 with high growth and a solid composition. In Q1 Germany grew by 0.7% quarter-on-quarter, a figure it has only bettered twice in the last five years, supported primarily by the strong contribution from domestic demand (+0.7 pps). Private investment led growth and posted its largest increase in the last two years, while private consumption maintained its good rate of 2015 (0.4% quarter-on-quarter). Moreover, domestic demand was also helped by an increase in public expenditure related to the arrival of a large number of refugees in the country. External demand reduced its negative contribution to growth (–0.1 pps) with a substantial increase both in exports and imports. The CaixaBank Research outlook for Germany is therefore positive given the good composition of its growth in Q1 and the more positive tone of indicators in Q2. 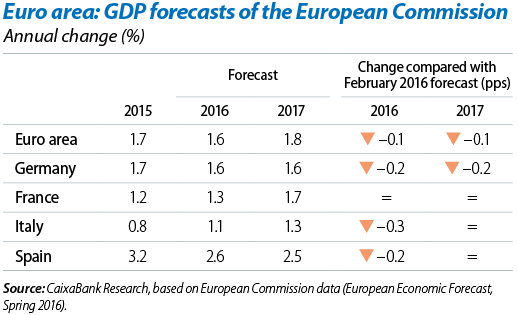 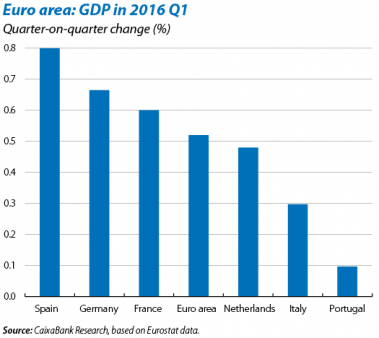 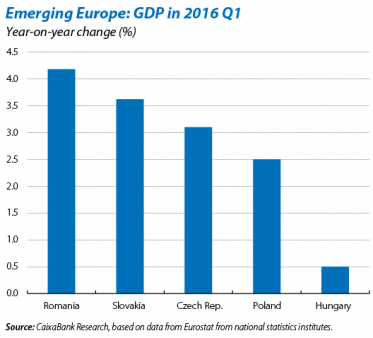 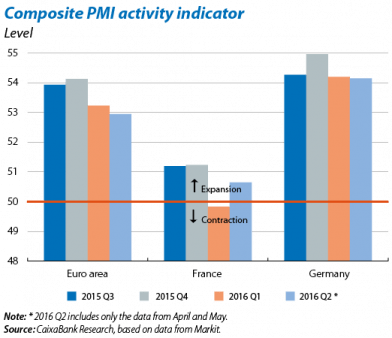 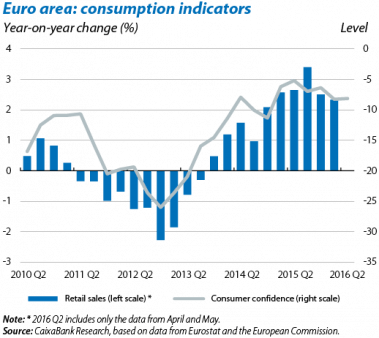 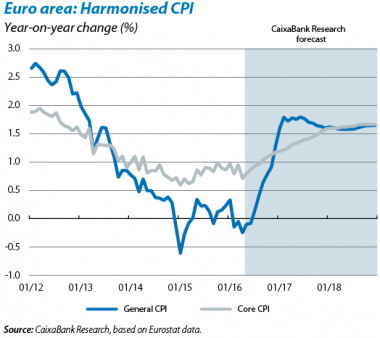 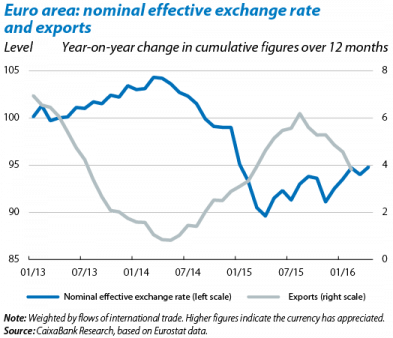 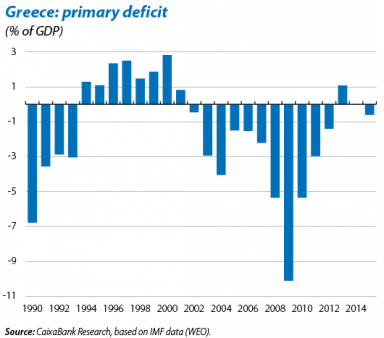 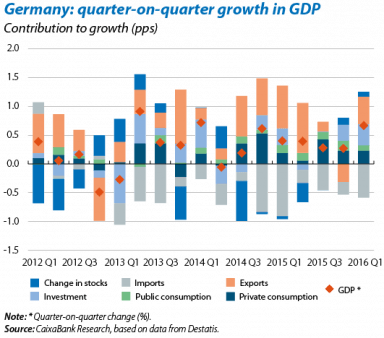