Growth momentum in the euro area

Economic growth is gaining traction in the euro area. After several years of weak recovery in the euro area, economic growth is finally picking up in most member states. It is also becoming more self-sustainable after a noticeable decline in domestic risks and improved confidence. One sign of this is the IMF raising its forecasts in July for the euro area’s main economies. CaixaBank Research has also improved its growth forecasts for euro area economic activity, up to 2.2% in 2017 and 2.0% in 2018. This upward revision is on the back of several quarters of growth figures above the average of the past few years. However, although domestic risks have diminished, particularly on the political front, there are still significant sources of global uncertainty (both political and geopolitical). Longer-term growth in the euro area might also be hindered by other factors, such as its ageing population and high debt, both public and private. In the political sphere, how the Brexit negotiations will develop over the coming months will be vital. Especially important is the discussion of the Brexit bill, the amount the UK might have to pay the EU for pre-existing financial obligations. Discussions may also intensify regarding the EU’s necessary reformulation to further its economic integration, an issue we analyse in detail in this month’s Dossier, «Europe’s moment».

Q2 data confirm the euro area’s growth rate has improved. Euro area GDP rose by 2.2% year-on-year (0.6% quarter-on-quarter) in Q2 2017. GDP growth speeded up in the main euro area countries: in Germany, to 2.1% year-on-year; France, to 1.7% year-on-year, and Italy, to 1.5%. Domestic demand is particularly strong in all three economies although less so in Italy, still vulnerable to banking and political risks. Outside the euro area, in Eastern Europe, Poland led the field with 4.4% growth year-on-year. A slight slowdown in the UK’s economy was also confirmed. The negative impact of Brexit on economic activity is starting to be felt, with growth at 1.7%.

Economic activity indicators point to the euro area economy continuing to perform well in Q3. The composite business sentiment index (PMI) for the euro area as a whole stood at 55.8 points in August, remaining as strong as it was in the first half of the year (averaging 56.1 points). The economic sentiment index (ESI) also increased to 111.9 points in August, its highest level for the past 10 years. The euro area’s industrial production data were weaker than the previous month, however, down by 0.6% month-on-month. Nevertheless, indicators broadly point to the euro area economy continuing to grow at a good rate in Q3.

Consumption is still a key support for euro area growth. One sign is the positive trend in retail sales, growing by 3.1% year-on-year in June, 0.7 pp more than the previous month’s figure. The consumer confidence index for the euro area as a whole also reached –1.5 points in June, its highest figure since May 2007. We expect this good performance by private consumption to continue over the coming months, helped by low interest rates and ongoing labour market improvements.

The labour market is buoyed by strong economic growth. Euro area unemployment stood at 9.1% in July, 2 pp below the level of two years ago. This improvement is broadbased across countries, albeit to differing degrees and starting from very different levels. Germany, France and Italy have reduced their unemployment rates by almost 1 pp in the past two years. Over the same period, Spain and Portugal have reduced theirs by more than 5 pp and 3 pp, respectively, with a markedly strong recovery in the labour market. Portugal has performed particularly well, its unemployment rate falling to 9.1% in July, the same level as the euro area as a whole.

Inflation continues to normalise very gradually. In August, euro area headline inflation, measured by the harmonised index of consumer prices (HICP), stood at 1.5%, 0.2 pp higher than the previous month due to a larger contribution from the energy component and services. Core inflation, which excludes headline inflation’s volatile components (energy and unprocessed food), remained unchanged at 1.3%. Core inflation, which is more indicative of medium term inflationary tensions, is likely to recover gradually over the coming months owing to the growth in economic activity and the improved labour market.

Portugal’s GDP grew by 2.9% year-on-year in Q2, its highest growth rate in the past 15 years and far higher than the rate posted since the start of its economic recovery (+1.3% on average between Q4 2013 and Q4 2016). Although quarter-on-quarter growth slowed down to 0.3%, this has occurred after several exceptionally good quarters. Domestic demand’s contribution to year-on-year GDP growth in Q2 was 2.9 pp, supported by higher consumption (up by 2.1% year-on-year) and a strong upturn in investment (10.3% year-on-year). However, public consumption declined by 0.9% year-on-year. External demand contributed just 0.1 pp to year-on-year GDP growth owing to a smaller rise in both exports (8.2% year-on-year) and imports (7.5% year-on-year). Over the coming months, growth will continue to be supported by domestic demand which is looking much more solid, partly on the back of the gradual recovery in the labour market and improved business confidence. External demand should also make a positive contribution to growth since exports will be boosted by a more favourable external environment, especially in the euro area.

Economic activity will continue to perform well in Q3. The Bank of Portugal’s coincident indicator for economic activity, which summarises the trend in Portugal’s high frequency indicators, shows a clear upward trend from Q4 2016 and rose by 3.6% year-on-year in July. This marked improvement suggests economic activity will remain strong over the second half of the year. The Bank of Portugal’s coincident indicator for private consumption also rose by 2.6% year-on-year in July, with retail sales (excluding automobiles) posting a 3.8% increase year-on-year. Both indicators point to the positive performance observed by private consumption in the past few quarters continuing in Q3.

Tourism, a key factor in Portugal’s improved foreign sector. The effect of the current boom in global tourism can especially be seen in Portugal. Foreign tourists made more than 40 million overnight stays in hotel establishments in July (cumulative over 12 months), up by 11.1% year-on-year compared with the previous year and a record number of stays. Most visitors come from the UK (22.9% in 2016), followed by Germany (13.9%), France (10.6%) and Spain (10.3%). The tourism sector is therefore gaining share in Portugal’s economy: in 2016 it accounted for 6.9% of GDP (up 0.5 pp compared with the previous year). It is also playing a vital role in improving the services account (tourism revenue rose by 21% from January to July 2017 compared with the same period the previous year). 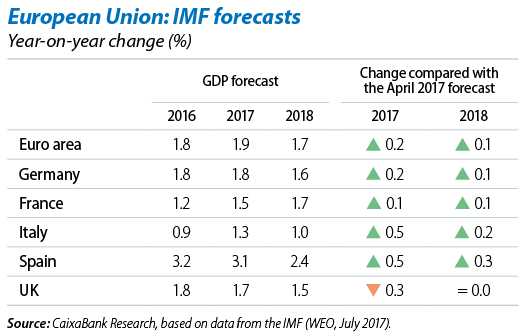 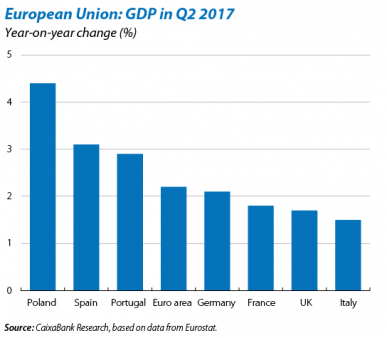 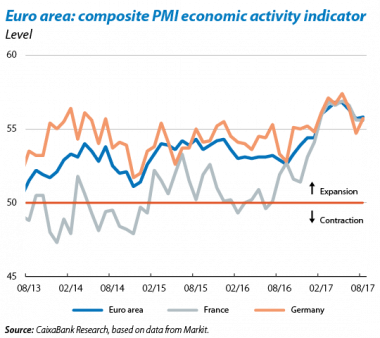 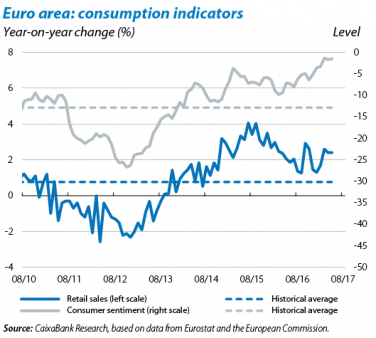 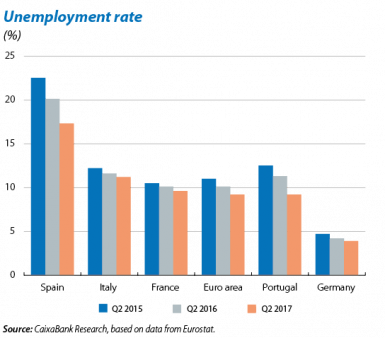 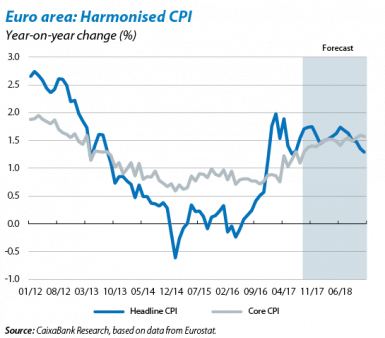 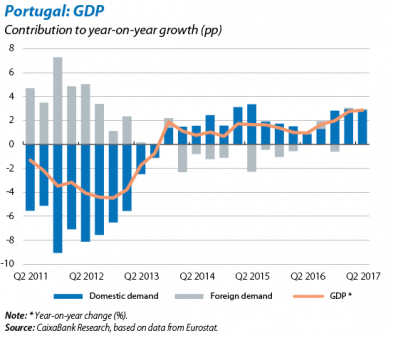 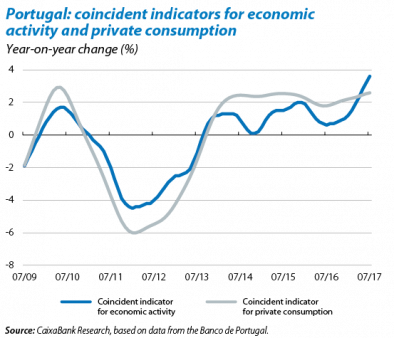 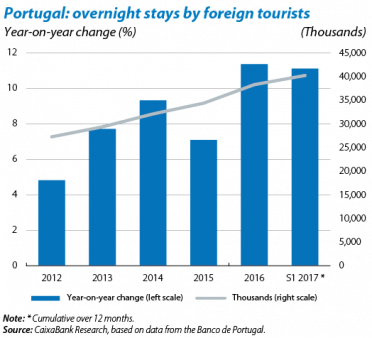