Growth remains strong, despite the increase in downside risks

Global activity indicators remain high, albeit they point towards a slight moderation of growth, especially in emerging markets. In particular, the global composite business sentiment index (PMI) remains in clearly expansionary territory (above 50 points), although in August it declined for the second consecutive month, to 53.4 points, its lowest level since March. This reduction in the index was more pronounced in emerging countries, which are feeling the effects of the heightened political and economic uncertainty and the gradual tightening of global financial conditions. Over the next few quarters, we expect growth in emerging economies to continue to gradually slow down, which will imply a slightly more contained global growth rate.

Recent geopolitical events have led to an increase of downside risks. In particular, despite having entered into negotiations with China to steer the trade tensions, the US announced another round of tariffs on Chinese imports (this time, 10% on a value of 200 billion dollars). This is in addition to the 25% tariff package on Chinese products valued at 50 billion dollars that was already implemented this summer. On the other hand, at the European policy level, the United Kingdom and the EU are hoping to reach an exit agreement over the next few weeks that will make effective, from March 29, the transition agreement previously reached. According to this agreement, the United Kingdom will remain in the single market and the customs union until the end of 2020. However, there are still important elements to be resolved – such as finding a solution to the issue of the border between Ireland and Northern Ireland – and the ratification process in the United Kingdom could prove complicated and end up delaying the agreement. It is therefore likely that the uncertainty surrounding Brexit will regain prominence over the next few weeks (or even months) until the final exit agreement is announced. This announcement could be accompanied by a statement setting out the basis for the future relationship between the United Kingdom and the EU. Finally, in Italy, everything suggests that the coalition Government will propose a significant deviation from the deficit target agreed in May in Brussels (possibly increasing it from the 0.8% agreed to 2.4%, which would make it difficult to correct the country’s high level of public debt). Although official details on the final scale and composition of the fiscal measures remain uncertain, the new plans could create tensions in the financial markets and with European partners.

The indicators continue to suggest solid growth. In particular, following the encouraging GDP growth figure for Q2 (1.0% quarter-on-quarter and 2.9% year-on-year), the indicators available for Q3 – some of which have been higher than expected – confirm that the US economy continues to grow at a rapid rate. As an example, nowcasting GDP models of the Federal Reserve Banks of Atlanta and New York predict an activity rate for Q3 that is well above the US economy’s growth potential (which we consider it to be around 2%). In addition, the manufacturing and services business sentiment indices (ISM) increased significantly in August, reaching 61.3 and 58.5 points, respectively, and well above the threshold that separates the expansionary and recessive territories (50 points).

The labour market and domestic demand produce strong results. In particular, in August, 201.000 jobs were created, a considerable figure for an economy experiencing virtually full employment. In addition, the unemployment rate remained at a low 3.9%, while wages continued to rise at a steady rate (2.9%). In this context, household confidence remains high, as demonstrated by the consumer confidence index developed by the Conference Board in August, which rose to levels not seen since 2000 (133.4 points). All of this reinforces our positive growth outlook for the US economy in 2018 (2.8%, according to CaixaBank Research).

The upward trend in inflation of recent months slows, but it remains at strong levels. Specifically, headline inflation stood at 2.5% in August, 2 decimal points below the figure for the previous month, but clearly above the 2017 average (2.1%). On the other hand, core inflation, which excludes the most volatile components of energy and food, stood at 2.2% (2.4% in July). This slight moderation in the growth of prices was in part due to the expected dissipation of temporary factors, such as the base effects caused by the sharp decline in wireless telephony prices during 2017. Over the coming months, we expect that the strength of US economic activity will continue to support firm inflationary pressures, which in turn will support the Federal Reserve’s intention to continue with its rate hikes (one more before the end of the year, according to CaixaBank Research).

The outlook for the euro area remains positive, despite the moderation in the pace of economic activity. The growth slowdown of the first half of the year was largely due to a weakening of external demand, following a very positive 2017. This reflects the weakening of global demand for goods and services, as well as the appreciation of the euro in 2017. For this reason, in its quarterly update of the macroeconomic forecasts, the ECB moderated its growth forecasts for the euro area by 1 decimal point, to 2.0% for 2018 and 1.8% for 2019 (a scenario that is very similar to CaixaBank Research’s). However, over the coming quarters, we expect the economic expansion of the euro area to remain steady, with a growth rate slightly above potential, supported by very favourable financial conditions and a good performance of the labour market.

Domestic demand remains the main driver of growth in Q2. The breakdown of GDP in the euro area shows that Q2 growth (2.1% yoy) was driven by a 1.7 pp. contribution from domestic demand (1.8 pp. in Q1). This came as a result of growing investment, and despite the slight moderation of private consumption. On the other hand, external demand faltered again and reduced its contribution to 0.4 pps (0.6 pp. in Q1), due to modest growth in exports of goods and services.

Activity indicators suggest that growth in Q3 remains at similar levels to those seen in the first half of the year. The composite PMI index for the whole of the euro area – which measures business sentiment – stood at 54.2 points in September, 3 decimal points below the August figure but in clearly expansionary territory. Furthermore, the economic sentiment index (ESI) stood at 110.9 points in September, similar to the average for 2017 (110.7). On the other hand, and despite falling in September for the second consecutive month, down to –2.9 points, consumer confidence remains at levels similar to the average for 2017 (–2.5 points). In this regard, private consumption will continue to be supported by the labour market, which continues to perform well (in July, the unemployment rate remained at 8.2%, its lowest since November 2008).

In China, the economic indicators point towards a slowdown in activity over the coming months. In particular, industrial production increased by 6.1% year-on-year in August (6.0% in July), an encouraging figure, albeit below the 2017 average (6.5%). Something similar occurred with retail and consumer goods, which grew by 9.0%, 2 decimal points above the figure for July but clearly below the average for 2017 (10.2%). Also, based on available data, CaixaBank Research’s activity indicator suggests a slightly lower growth rate in Q3. All this suggests that, over the coming months, the country’s growth will continue to gradually slow down, despite the Government’s recent policies aimed at supporting investment and credit.

In Brazil, political uncertainty continues to hold back growth. The Brazilian economy grew by 1.0% year-on-year (0.2% quarter-on-quarter) in Q2, below the Q1 figure (1.2%). This confirms that the economic recovery is yet to be consolidated, as is being held back by the significant political uncertainty in a context of presidential and legislative elections. In this regard, even after Lula’s withdrawal as a candidate for the Workers Party, we expect that political uncertainty will continue to weigh down economic activity, given that none of the presidential candidates seem to have the electoral support nor the will to implement the reforms that the economy needs. 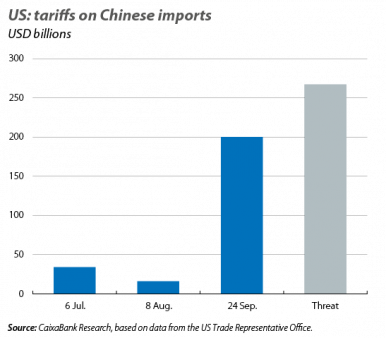 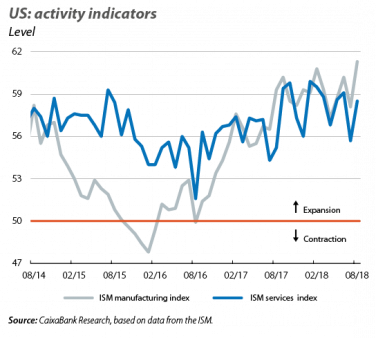 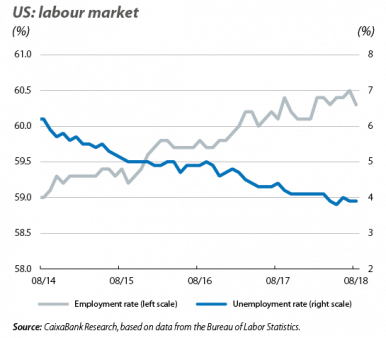 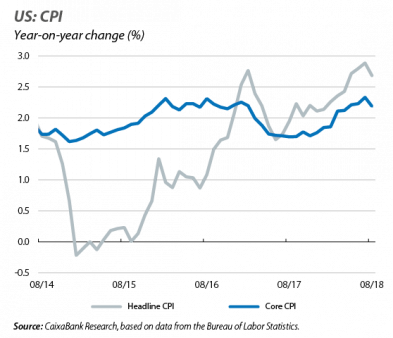