Heading towards a widespread global slowdown

A temporary pause in the global slowdown? Following a few difficult quarters with declining momentum in the global economic sentiment indicators, the latest available data show that some representative confidence indicators, such as the global composite PMI, have rebounded. A similar reading can be drawn from economic activity indicators in the emerging markets, such as the so-called IIF Growth Tracker, which seeks to estimate these countries’ contemporary growth and which registered two consecutive months of increases in November. Besides this representing a pause in the economic slowdown, the length of which remains to be seen, the global indicators still suggest a slower pace of economic activity compared to a few quarters ago. Furthermore, if we review the factors that lie behind this moderation, the indicators suggest that the slowdown observed over the past year seems likely to continue.

The factors hindering growth remain active. The slowdown in the global economy witnessed in recent quarters has been brought about by a combination of factors that are acting simultaneously and which are expected to continue to (moderately) restrict global growth in the near future. Firstly, the global financial conditions have become less accommodative due to the measures of certain central banks (mainly the Fed’s normalisation of monetary policy, as is well known), as well as due to the surge in financial volatility in many stock markets and, in some cases, sovereign debt yields. In addition, geopolitical uncertainty (particularly the rise of US protectionism, which has led to a spiral of trade tensions with China and, to a lesser extent, with the EU) is already taking a toll on international trade flows. As such, in September, year-on-year trade growth stood at 2.4%, compared to 5.6% at the beginning of 2018. Finally, the trend in commodity prices, not only oil but in a broader sense, has experienced a downturn in the second half of the year: the CRB index, which measures a wide range of commodity prices, has fallen by 7% since last June. Given that this is a key source of growth for many emerging markets, it is logical that they are losing momentum.

Economic activity remains buoyant, but the pockets of risk show no sign of dissipating. The consumer confidence index developed by the Conference Board stood at 135.7 points in November, well above the average for 2017 (120.5). On the other hand, the business sentiment index (ISM) rebounded to 59.3 points, thus remaining at historically high levels. Similarly, the second GDP estimate for Q3 confirmed the strong momentum of the US economy (with quarter-on-quarter growth of 0.9% and year-on-year growth of 3.0%).

In this context of strong economic activity data, the US and China agreed to halt the imposition of new trade tariffs for 90 days while they negotiate the nature of their future bilateral relations. Despite this so-called «trade truce» having provided some relief, there is still a long way to go before a definitive solution to the conflict is reached.

In a context of cyclical maturity, the Fed raises rates once again. The US economy therefore remains buoyant, despite being in a mature phase of the cycle. This situation is particularly reflected in the strength of the labour market, which managed to create 155,000 jobs in November (a high figure, if we consider the economy’s situation of virtually full employment). In this context, and as expected, the Fed once again rose the reference rate up to 2.25%-2.50%. Nevertheless, with regards to the future tightening of financial conditions, the Fed has communicated to the market the possibility of a slower pace of rate hikes in 2019, which reflects the doubts surrounding the pace of growth in the US this year as the expansionary effects of fiscal policy are diluted.

Economic activity slows down, but the trend could be temporary. The latest economic activity indicators for the euro area suggest that the economic slowdown continues, which has increased concerns over the actual rate of growth that can be expected over the coming quarters. All in all, the breakdown of GDP for Q3 2018 confirmed that domestic demand remains the main driver of growth in the euro area. Given the inertia that this component generally has, this leads us to think that the growth of the euro area will reach healthier levels over the next few quarters (for more details, see the Focus «Euro area growth: neither terribly fast nor particularly slow» in this Monthly Report). This is also the ECB’s reading, which highlights the temporary nature of the current slowdown and is being accepted as a consensual and reasonable view.

The United Kingdom and Italy remain sources of uncertainty. As the official date of the United Kingdom’s departure from the EU approaches, certainty over how the process will be carried out is decreasing, rather than increasing. In December, we witnessed the withdrawal of the parliamentary vote on the preliminary Brexit agreement and a motion of no confidence in Theresa May, which, eventhough she survived it, also served to confirm the fragmentation within the Conservative Party itself. A new attempt at ratifying the preliminary agreement in the House of Commons has now been announced and is due to take place before 21 January 2019. Although the British Government is expected to ratify the agreement, the difficulties in achieving a majority in the House of Commons increase the chances of the United Kingdom deferring its departure from the EU, or of the day of Brexit arriving without an agreement having been reached, which would lead to a disorderly exit for the United Kingdom. Developments in the budgetary conflict between Italy and the EU, on the other hand, are somewhat more positive. After the European Commission kick-started the process to implement a so-called «excessive deficit procedure» against Italy, the Italian Government has conceded and has announced a downward revision of its deficit target for 2019 (2.04% of GDP, compared to the 2.4% initially proposed). Despite this representing a step in the right direction and the European Commission announcing that the procedure could be called off, Italy’s public finances are unlikely to cease being a source of risk.

(Temporary) relief in the emerging markets. The state of several emerging economies (those known as «fragile emerging economies», characterised by the presence of macroeconomic imbalances) has been a source of concern for analysts and investors at least since last summer. In October and November, the underlying tone of economic activity has been more favourable, albeit with some exceptions such as Turkey (more on that further below). One of the highlights of this improvement in economic sentiment and in investors’ risk tolerance has been the recovery of capital inflows in the aforementioned two months, both of debt and equity. However, that same measure has shown signs of erosion in December, reflecting the heightened global financial volatility seen in recent weeks. Beyond this short-term view, and as we have already commented, the emerging slowdown is expected to continue over the next few quarters in light of the set of three factors affecting these economies. These include a context of tighter global financial conditions, continued uncertainty over trade tensions and declining commodity prices.

The Chinese economy continues to slow down, both in its internal and external components. In November, industrial output grew by just 5.4% year-on-year (5.9% in October), the lowest rate since the beginning of 2016. Retail sales also slowed to 8.1% (8.6% in October). In addition, Chinese exports (in dollars) rose by just 5.4% in November, a significant slowdown following the impressive figure for October (15.6%). As such, China’s export sector is beginning to show somewhat less margin for manoeuvre in the face of the trade tensions with the US, and the indicators point towards growth of less than 6.5% in Q4.

Notable economic slowdown in Turkey. In Q3, GDP growth stood at 1.6% year-on-year, a far cry from the 5.3% registered in the previous quarter, as well as being lower than expected. The breakdown by component shows that the abrupt halt of inflows of international capital experienced in the summer put a sudden stop to financing for investment and private consumption (a component that was also affected by inflationary shock). In addition, the negative trend in growth is likely to continue over the coming quarters. 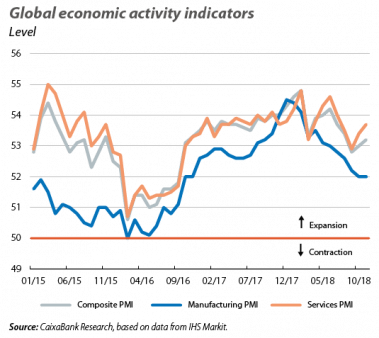 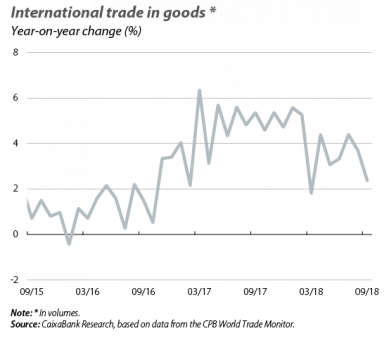 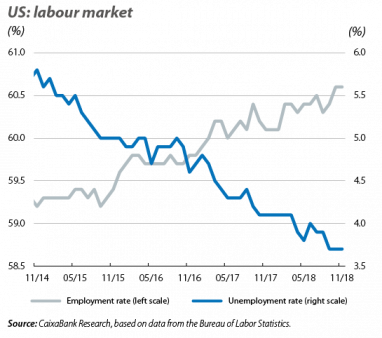 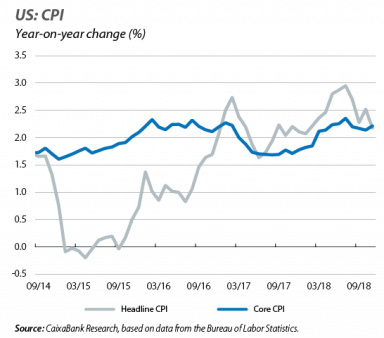 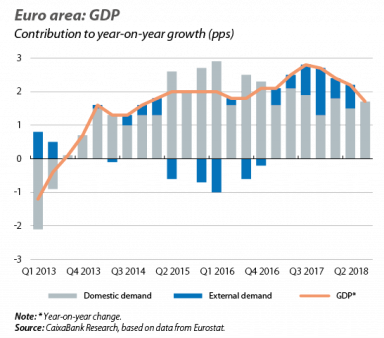 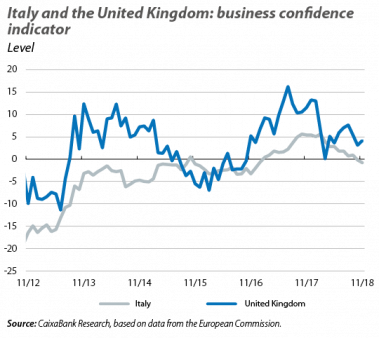 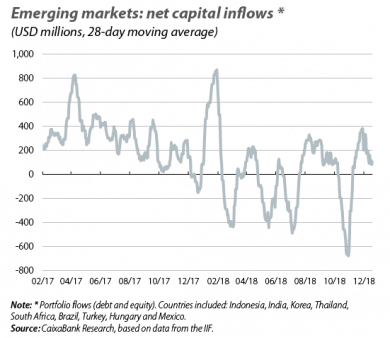 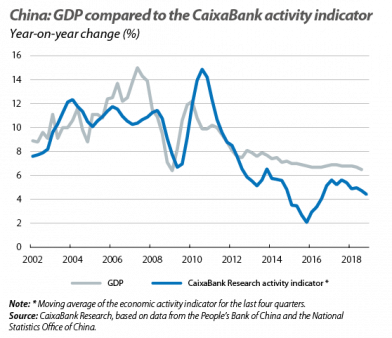 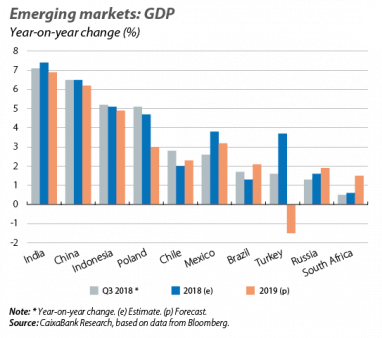