Moderation in the rate of growth, as expected

Slight slowdown in growth. The Spanish economy is moderating its growth rate slightly, and the revision of the annual GDP series carried out by the National Statistics Institute every September confirms this trend. While growth in 2015 was 3.6%, slightly higher than expected, in 2016 it was 3.2% and in 2017, 3.0%, both 1 decimal point lower than previously announced. In 2018 and 2019, as foreseen in CaixaBank Research’s scenario, this gradual deceleration will continue due to the fading of the tailwinds that have supported the economy over the last few years. Domestic demand continued to grow at a good pace, albeit somewhat lower than in the past, supported by slightly less vigorous private and public consumption, as well as by growth in investment that is expected to accelerate slightly. The foreign sector’s contribution to growth, meanwhile, will be close to zero, due to export growth being held back by the reduced activity of the euro area and imports remaining strong due
to domestic demand.

The activity indicators for Q3 point towards a moderation of the growth rate. Specifically, the CaixaBank Research’s leading GDP indicator for Q3 projects a quarter-on-quarter growth of 0.5%. This is lower than the growth observed in the last six quarters (0.7% on average) although, given the moderate availability of data relating to Q3, it is still a relatively tentative forecast. All in all, the indicators available to date are clearly below those of last year. On the supply side, the composite PMI business sentiment indicator remains in expansive territory (at 53 points in August), but below the 56.2-point average for 2017. Furthermore, industrial production fell by 0.1% in July, following year-on-year growth of 0.9% in Q2. On the demand side, retail sales fell by 0.4% year-on-year in July, continuing the sluggish performance observed in Q2 (0.0%, compared to +0.9% in 2017). Thus, everything seems to indicate that the economy is entering a more mature phase of the cycle in which it will maintain a solid rate of growth, albeit lower than in recent years.

Job creation grew in August by 2.9% year-on-year, a strong rate, albeit 1 decimal point lower than in July. In seasonally-adjusted terms, the number of registered workers affiliated to Social Security fell by 203,000 people. This is a common occurrence in holiday periods, although the decline was somewhat greater than in previous years. In the last 12 months as a whole, however, the number of registered workers has increased by 530,000 people and we expect this encouraging trend to continue, albeit at a slightly slower pace than in the past. Salary costs, meanwhile, saw a moderate rise in Q2. According to the Quarterly Labour Cost Survey, the labour cost per effective hour grew by 0.9% year-on-year (seasonally adjusted and corrected to take account of calendar effects), 1 decimal point higher than the growth registered in the previous quarter. Looking towards the next few quarters, we expect labour costs to continue to gradually rise, as the recovery in the labour market continues and higher salary increases agreed in collective agreements are applied.

The foreign sector moderates its positive tone. The current account surplus for July stood at 1.3% of GDP (12-month cumulative balance), lower than the 1.9% registered for July 2017. Half of this 6-decimal point decline (i.e. 3 tenths of a percentage point of GDP) can be explained by the non-energy balance, which is slightly negative, while the effect of higher oil prices explains another decimal point. In addition, customs data for the month of July show that total exports of goods grew by 5.6% year-on-year (12-month cumulative figure), while the non-energy subcomponent of exports increased by 4.4%. Imports, meanwhile, also accelerated, driven by domestic demand and higher oil prices, with a growth of 7.2% (5.9% year-on-year in the case of non-energy goods). For the year as a whole, CaixaBank Research predicts a reduction in the current account surplus down to 1.1% in 2018, due to the higher oil prices as well as higher imports of non-energy products.

The fiscal deficit in Q2 stood at 1.8% of GDP, which represents a 0.4-pp reduction compared to the figure for Q2 2017. Thus, in the first half of the year, the deficit would have already reduced by the 0.4 pps needed to achieve the deficit of 2.7% of GDP for 2018 that was agreed with Brussels (compared to the 3.1% deficit in 2017). In the second half of the year, there is likely to be a slight increase in expenditure, notably due to the rise in civil servants’ salaries and the revaluation of pensions, both included in this year’s budget. By administration, the State deficit, for which data are already available up to August, decreased to 1.6% of GDP (1.9% in August 2017). Also, based on data up to July, the Social Security deficit stood at 0.3% of GDP (0.5% in July 2017) and the Autonomous Communities recorded a surplus of 0.1% of GDP (an improvement on the deficit of –0.1% of GDP in July 2017). The general government debt, on the other hand, stood at 98.1% of GDP in Q2 2018, 1.3 pps lower than in Q2 2017.

The real estate market consolidates its upward trend. Homes prices published by the National Statistics Institute, based on transactions, rose by 6.8% year-on-year in Q2 2018, 6 decimal points higher than the increase observed in Q1 and the average for 2017. On the other hand, the prices published by the Ministry of Public Works, based on valuations, rose by 3.8% year-on-year in Q2 and consolidated the upward trend in home prices that began in 2015. On the demand side, the buoyancy in the number of home purchase and sale transactions continues, increasing by 12% year-on-year in the current year up to July. On the supply side, the granting of planning permission for new developments increased by a significant 24% year-on-year in the current year up to May. As such, the indicators reflect a favourable outlook for the next few quarters. 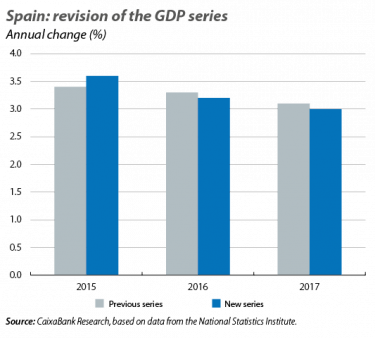 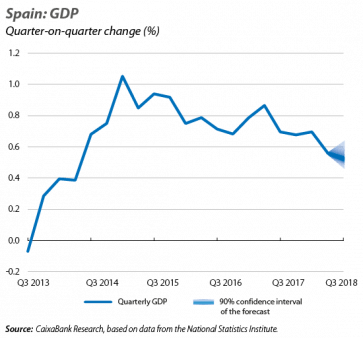 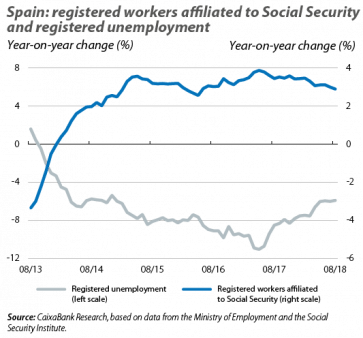 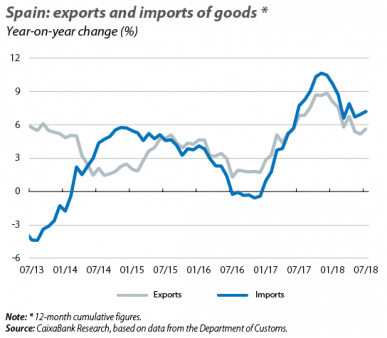 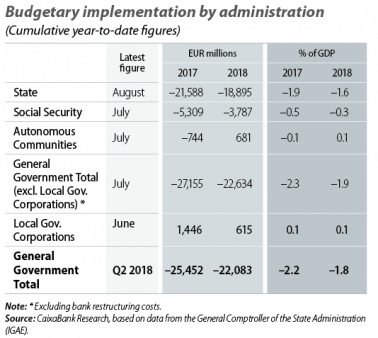 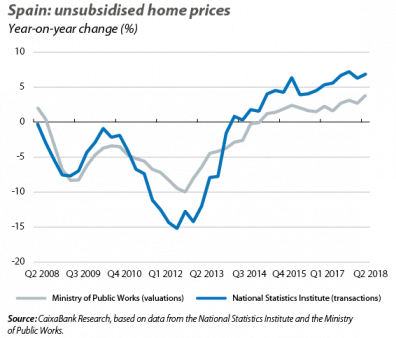 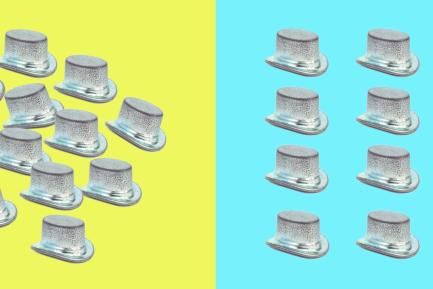